HBV genotypes and most subgenotypes show a distinct geographic distribution. In Asia, where there is a high prevalence of HBV carriers, strong evidence suggests that HBV genotypes influence the course of disease. Several recent reviews have summarised knowledge on different aspects of HBV genotypes[7-12] and on hepadnaviruses that infect species other than homo sapiens[13-15]. This review will update recent developments in understanding HBV genotypes and taxonomy.

HBV is a partially double stranded virus that uses reverse transcriptase in its replication cycle. Thus, HBV is similar to many retroviruses found in animals and pararetroviruses in plants[16,17].

After cloning and sequencing the HBV genome[18], several related viruses were discovered in woodchucks (Marmota monax)[19], ground squirrels (Spermophilus beecheyi)[20] and pekin duck (Anas domesticus)[21]. Subsequently, numerous new viruses that are similar to HBV were found in mammals and birds and have been cloned (Tables 1 and 2). All these viruses are classified in the family of hepadnaviridae, including the genus orthohepdnavirus (mammals; Figure 1), and the genus avihepadnavirus (birds; Figure 2). In addition to the avihepadnaviruses listed in Table 2, five new hepadnaviruses were cloned from exotic duck and goose species; i.e., the Chiloe wigeon, mandarin duck, puna teal, Orinoco sheldgoose, and ashy-headed sheldgoose. Sequence comparisons revealed that 4 virus isolates were closely related to existing isolates of duck hepatitis B virus (DHBV), while the mandarin duck virus was closely related to Ross goose hepatitis B virus[22]. 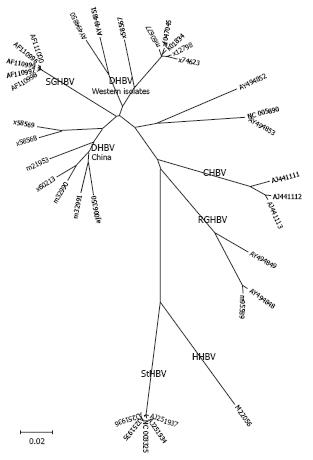 In chimpanzees, gorillas, orangutans and gibbons new putative members of hepadnaviridae were discovered and sequenced completely[14]. It is now widely accepted that primate hepadnaviruses are indigenous to their hosts. Because hepadnaviruses isolated from apes are grouped as HBV genotypes in phylogenetic analyses, it has been suggested that isolates from apes should be named following the nomenclature used for immune deficiency viruses[23] (Table 1), e.g. HBV found in chimpanzees should be called HBVcpz. With only 5% divergence from the chimpanzee HBV isolates, the HBV isolate from gorilla is categorized in the HBV genotype (Figure 3, unpublished results). Thus, three HBV genotypes from apes can now be differentiated. The chimpanzee and gorilla isolates from Africa are categorized as one genotype, i.e., HBVcpz. The isolates from the South-East-Asian apes, gibbon and orang-utan, are categorized into two genotypes, i.e., HBVgbn and HBVoru, respectively. These genotypes diverge by 8%. Within the gibbon genotype, distinct strains of HBV circulating in geographically separated populations have been described[24]. 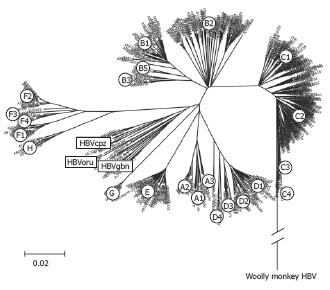 Figure 3 Phylogenetic tree of complete HBV genomes. An alignment of 601 complete HBV sequences was performed with Clustal X in the program DNAstar. The alignment was further analysed by boot-strapping using the Neighbourhood-Joining method contained in MEGA version 3.1[104].

Avihepdnaviruses are the most distant relatives of HBV with a nucleic acid homology of only 40%. WHV and GSHV as mammalian hepadnaviruses are more closely related to HBV and differ by only 17%. Complete WHV and GSHV genomes from GenBank show a high degree of homology and only one genotype is listed[25-27]. However, using degenerate primers, several variant WHV isolates from wild-captured woodchucks were found that showed high divergence with sequencing of small parts of the genome[28]. DHBV has two genotypes, in contrast to WHV and GSHV, which have a narrow host range and geographical distribution[25,26], DHBV is found in different avian species with independent isolates in many countries around the world[29] (Figure 4). 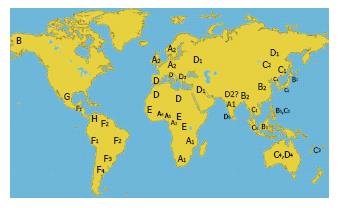 Human HBV can be grouped into eight genotypes (based on more than 8% difference)[7,9-12]. Several attempts have been made to reconstruct the evolution of hepadnaviruses[30-34]. Estimating the rate of synonymous substitutions for HBV to be 4.57 × 10-5 per site per year, DHBV has been proposed to have diverged about 30 000 years ago from a common ancestor while GSHV and WHV should have diverged about 10 000 years ago from HBV and the HBV serotypes would be separated by about 3000 years[31]. However, as long as we are not able to accurately estimate the mutation rate of HBV over centuries or even millennia, it is not possible to calculate a time point for the separation of HBV genotypes or hepadnaviral species.

HBV genotypes differ by more than 8%[2,3]. Phylogenetic analyses using alignments of whole genomes have shown that 8 genotypes, called A, B, C, D, E, F, G and H, of HBV can be distinguished[7,11,12,35] (Figure 1). In general, HBV isolates found in apes diverge similarly to HBV genotypes in phylogenetic analyses and have been named HBVcpz, -oru, -gor and -gbn for their host’s, i.e. chimpanzee, orang-utan, gorilla and gibbon, respectively (Table 1)[23]. However, as elucidated above, the isolate from gorillas is always categorized into the chimpanzee clade.

A prototypic HBV genome may have a length of 3215 nt, as found in HBV genotypes B, C, F and H. Due to deletions and insertions (Table 3), the other HBV genotypes differ slightly in length of genome (Table 3). Thus HBV genotype G with 3248 nt. is 66 nt longer than genotype D with 3182 bp.

Extensive phylogenetic analyses have shown that HBV genotypes can be further subdivided into subgenotypes (Table 4). HBV subgenotypes differ by at least 4%[8]. In genotypes A, B and C, epidemiological data show that the respective subgenotype pairs A1/A2 (formerly termed Aa/Ae)[36], B1/B2 (formerly Bj/Ba)[36] and C1/C2 (formerly Cs/Ce)[37-39] differ substantially in many virological and probably some clinical parameters. Subgenotypes also show distinct geographic distribution (Figure 3). However, this is not true for genotype D with subgenotypes D1, D2 and D3 being described as widespread in the world; e.g. D3 was found in Asia (East India)[40], South Africa[41] and Europe (Serbia) (Stanojevic et al, unpublished results).

Double infections with two different HBV genotypes have been known since typing was done serologically[51,52]. Subsequently, evidence of super infection with HBV isolates of the same or different genotype was described in chronic HBV patients[53]. Super infection was accompanied by acute exacerbation of the chronic disease. Additional observations came from patients treated with interferon. Before treatment, HBV genotype A was prevalent. After treatment and relapse, a switch of the genotype to HBV genotype D was described[54,55].

Using different methods for genotyping, several reports described high rates of double infection with two different HBV genotypes in all parts of the world. Using these methods double infections have been found in 4.4%[56], 10.9%[57], 12.5%[58], 14.1% (Kirschberg et al, unpublished results), 17.3%[59] and 17.5%[60] of HBV infected patients. Even triple infections with HBV of genotype A, B and C have been described in 0.9% of HBV infected intravenous drug users[60].

Infection with HBV of genotype G seems to be associated very often with an infection of HBV genotype A[61]. This was found in 4 individuals from the USA and in one patient from France[62].

Coinfection with two different HBV genotypes in one patient may lead to an exchange of genetic material between the two strains. However, with current knowledge of HBV replication, the mechanism for this supposed recombination remains enigmatic. No mechanism can be envisioned that would allow an exchange of genetic material between two hepadnaviral genomes at the level of transcription. Nevertheless, numerous authors described changes in the genome of HBV that appear to be the consequences of a recombinatorial event (Figure 5 and Table 5). 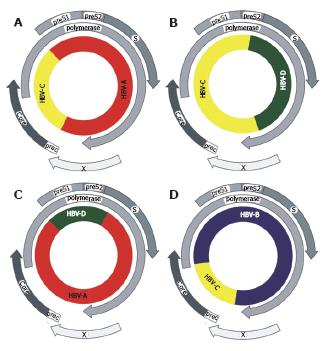 Figure 5 Schematic genome organisation of recombinants between HBV genotypes. HBV recombinants were described from materials sampled in A: Vietnam[99]; B: Tibet[68]; C: Africa[100] and D: Asia[67]. The ORF coding for the HBV proteins are shown as arrows, the inner circle represents the HBV genome.

Two recent works have comprehensively analysed the prevalence of events in the HBV genome that are reminiscent of recombinations[63,64]. About 87% of the putative recombinants were B/C (120) and A/D (29) hybrids. The other recombinants comprised A/B/C, A/C, A/E, A/G, C/D, C/F, C/G, C/U (U for unknown genotype) and B/C/U hybrids. Genotypes A and C showed a higher recombination tendency than did other genotypes. The results also demonstrated region priority and breakpoint hot spots in the intergenotype recombination. Recombination breakpoints were found to be concentrated mainly in the vicinity of the DR1 region (nt 1640-1900), the preS1/S2 region (nt 3150-100), the 3’-end of the Core gene (nt 2330-2450) and the 3’-end of the Surface gene (nt 650-830)[63,64].

Recombination events between human and chim-panzee[65]or gibbon[63] HBV sequences have also been described. Discrepant genotyping results from different parts of the genome are indicative of a recombination between genotype A and F[66]. Even mosaic genomes with sequences derived from three different genotypes have been described[59,64].

It remains open for discussion whether the observed exchanges are the consequence of direct genetic recombination taking place between two HBV strains or if they are the consequence of fast adaptation of HBV to a certain genetic and immunologic environment in different human populations in the world. The high replication capacity of HBV with a release of up to 1013 viral particles per day[71,72] and the high error rate of the viral polymerase, lead to the production of HBV genomes with all possible single mutations and double mutations of every nucleotide of the HBV genome every day[72]. Thus, a fast adaptation of HBV to a new environment is also a possibility.

A hypothetical mosaicism of the HBV genome has already been proposed by Bowyer and Sim[73]. This work and later works described most HBV genotypes as a modular genome[63] that represents a mixture of small segments coming from many different HBV genotypes. If we expand on this observation, the HBV genome may be made up of a number of allelic modules with different properties; e.g. different binding sites for transcription factors or antigenic epitopes. Thus, a certain combination of these modules would make up an HBV genotype. The findings of Fischer et al are in support of this speculation. The authors described genotype specific activation or repression of HBV enhancer II, preCore-pregenomic promoter by the transcription factor COUP-TF1[74].

HBV has been recognised as a prototype member of a family of viruses infecting mammals and birds. Due to its high replication capacity and the high error rate of the viral reverse transcriptase, HBV is able to adapt to the host’s environment. This adaptation has led to the emergence of eight genotypes in humans and three closely related genotypes in apes. The human genotypes have further diverged into at least 24 subgenotypes, with certainly many more to come, and a plethora of recombinants. From the analysis of recombinants there are indications that at least one more genotype remains to be detected.