A 35-year-old female patient presented with the following symptoms of Holmes-Adie syndrome: photophobia, enlargement of the left pupil unresponsive to light, Achilles areflexia. The pilocarpine test was positive. No tumor or other neurological abnormality was found. She had a 19-year history of autoimmune hepatitis. Flares up were observed following each 3 deliveries. At age of 31 she presented with diarrhea and weight loss. Abdominal tumor was detected by ultrasound. The surgically removed tumor was histologically a benign mesenteric multicystic lymphangioma. Simultaneously, celiac disease was diagnosed. Gluten-free diet resulted in a significant improvement of celiac disease, but not of autoimmune hepatitis. Autonomic neuropathy was proven by standard cardiovascular tests. The patient was a homozygous carrier for HLA DQ2 antigen characteristic for celiac disease and heterozygous for HLA DR3 B8 frequent in autoimmune liver diseases. Our novel observation on association of Holmes-Adie syndrome with autoimmune hepatitis and celiac disease is suggestive for a common immunological background for all three entities present in a patient with mesenteric multicystic lymphangioma.

Holmes-Adie syndrome (HAS) first described in 1931 is characterized by unilateral or bilateral dilatation of the pupil and lack of light reaction because of postganglionic injury of the parasympathetic oculomotor nerve. Ciliary muscle denervation causes accommodation impairment, while sphincter pupillae denervation produces mydriasis. It is often accompanied with peripheral nerve dysfunctions. Deep tendon reflexes (knee- and Achilles-reflex) are absent because of impaired spinal monosynaptic connections[1]. Most cases are caused by viral infection. Trauma, tumors, vascular lesion with ischemia, giant cell arteritis, diabetes mellitus or autonomic neuropathies can also damage the ciliary ganglion[2]. This is the first report on association of Holmes-Adie syndrome with autoimmune hepatitis (AIH) and celiac disease (CD) raising the probability of common autoimmune background in a patient with multicystic mesenterial lymphangioma.

A 35-year old female patient presented with symptoms of Holmes-Adie syndrome: photophobia and enlargement of the left pupil with absent reaction to light, accompanied with knee- and Achilles-areflexia (Figure 1). The positivity of pilocarpine test confirmed the diagnosis of HAS. Tumor, actual infection, ischemic disease, trauma and mechanical compression were excluded. 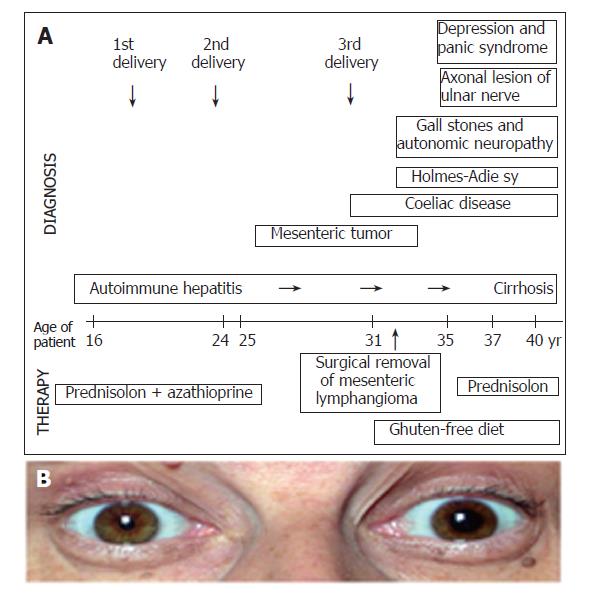 Figure 1 A: Sequence of events, appearance of symptoms and applied treatment. B: Dilated and light insensitive left pupil as symptom of Holmes-Adie syndrome.

She had a 19-year history of AIH proven by liver biopsies, autoantibody positivity (antinuclear antibody/ANA and smooth muscle antibody/SMA) and exclusion of other causes. The liver disease initially responded well to prednisone and azathioprine treatment. Flares up were observed following each 3 deliveries.

At age of 31, after the third delivery, she presented with anorexia, severe diarrhea, rapid loss of weight (18 kg/6 mo), amenorrhea and sideropenic anemia. Abdominal tumor was found by ultrasound and CT. The surgically removed tumor was 10 cm in diameter, histologically proven as a benign mesenteric multicystic lymphangioma. Simultaneously, in the background of malabsorption syndrome, celiac disease (CD) was diagnosed. Biopsy proved villous atrophy, anti-endomysium and transglutaminase antibody test was positive. Gluten-free diet resulted in a significant improvement and disappearance of symptoms of celiac disease. The secondary lactose intolerance ceased and the severe calcium deficient osteopenia (osteodensitometric Z-score L2-L4: -4,4) improved. The family history was negative for any autoimmune disease.

Holmes-Adie syndrome developed 4 years later and still persisted at the time when she was admitted. The progression of AIH was observed after immunosuppressive treatment and the strict gluten free diet. Now, at her age of 40 the liver biopsy showed cirrhosis. Axonal lesion of ulnar nerve was detected by electroneurography-electromyography (ENG-EMG) and autonomic neuropathy was proven by standard cardiovascular tests. The patient had gallstones in the enlarged gall bladder with reduced motility. In the last few years panic syndrome and severe depression developed. Alprazolam and fluoxetin were applied. She had polyarthralgia with the involvement of lumbar spine, knee and proximal interphalangeal and metacarpophalangeal joints. She complained of morning stiffness of 1 h duration. However, the X-ray examination was not characteristic for rheumatoid arthritis and the rheuma factor was negative. The sequence of events, appearance of symptoms and applied treatment are summarized on Figure 1.

The patient was a homozygous carrier for HLA DQ2 antigen characteristic for celiac disease and heterozygous for HLA DR3 B8 frequent in autoimmune liver diseases.

Association of autoimmune hepatitis and celiac disease has been reported, but not with Holmes-Adie syndrome. Initial reports in the late 1970s revealed that hepatic aminotransferase enzymes are frequently elevated at the time of diagnosis of CD[3]. The scale of the liver dysfunction in CD is wide: from raised transaminases with mild hepatic steatosis to chronic hepatitis and cirrhosis caused mainly by primary biliary cirrhosis (PBC), autoimmune hepatitis (AIH) or primary sclerosing cholangitis (PSC). Prevalence of CD in patients with primary biliary cirrhosis (2-7%) and AIH (3-5%) is higher than that in the normal population[4]. Liver dysfunction should therefore be examined in patients with CD at the time of diagnosis. On the other hand, CD should be searched in the background of cryptogenic liver diseases. Two mechanisms must be considered in the pathogenesis of liver dysfunction associated with CD: impaired gut mucosal integrity, malabsorption and increased permeability; and a common inherited predisposition for AIH and CD[4]. The HLA pattern in our patient supports the latter theory. She was a homozygous carrier for HLA DQ2 antigen characteristic for celiac disease and heterozygous for HLA DR3 B8 frequent in autoimmune liver diseases. HLA DR3 B8 is in close linkage disequilibrium with HLA DQ[4,5].

The presented case is a further example for manifestation of celiac disease in adulthood[5]. The immunosuppressive treatment for AIH might have delayed the manifestation of CD at age of 31. Several extrahepatic manifestations of CD could be the first presenting symptoms, making difficult the diagnosis. Known associated diseases of CD are autoimmune liver disease, thyroid gland disease, arthritis, Sjörgen syndrome, neurological and psychiatric symptoms, diabetes mellitus, cardiomyopathy, osteoporosis, tumors, infertility and dermatitis herpetiformis[5]. An increased occurrence of axonal neuropathy has been observed in well treated CD[11]. Usai et al [12] reported that autonomic nervous system (ANS) abnormalities are found in 45% of patients with CD. In a patient reported by Giorgetti et al [13]. ANS dysfunction does not improve after gluten-free diet. They speculated that ANS dysfunction may be a two step process: a gluten-related, reversible first phase and a gluten-independent, probably autoimmune-related second phase, which does not improve on gluten-free diet. Our case supports this hypothesis, because both the axonal lesion of ulnar nerve and the autonomic neuropathy proven by standard cardiovascular tests manifested during a strict gluten-free diet. Probably CD initiates certain autoimmune processes which enhance and perpetuate the subclinical neuropathy having existed since at least the manifestation of CD or perhaps of AIH.

Patients with CD have a 2.0-fold higher risk of death of gastrointestinal malignancies, mainly lymphomas[14]. However, there are no data on the coincidence of mesenteric multicystic lymphangioma and celiac disease. Mesenteric multicystic lymphangioma is often misdiagnosed as a malignant disease[15]. Retrospectively, rapid weight-loss is the consequence of CD but not of the tumor. Therefore, in the background of rapid loss of body weight, CD should be considered even in patients with large abdominal tumors.