A 49-year-old Japanese woman was referred to our department because of high fever and a huge abdominal mass. Computed tomography (CT) and magnetic resonance (MR) imagings revealed a tumor, about 30 cm in diameter, occupied the right hepatic lobe and the peritoneal cavity. Abdominal angiography showed that the tumor was fed mainly by the cystic artery. We preoperatively diagnosed angiosarcoma of the gallbladder and performed tumor resection with cholecystectomy because the tumor was almost casplated, however the posterior wall of the gallbladder attached to the tumor firmly. Histologically, the tumor was composed of spindle cells including lipoblasts with cellular pleomorphism, which were also detected in the muscular layer of the gallbladder. We finally diagnosed pleomorphic liposarcoma of the gallbladder. At 10 mo and 29 mo after the first operation, she underwent two more operations because of recurrence. Now she has a good quality of life 3 years and 6 mo after the first operation.

Liposarcoma is a mesenchymal malignant tumor that is usually detected in the extremities and the retroperitoneum[1]. Primary intra-abdominal liposarcomas are rare: most originate from the mesentery and peritoneum[1]. We experienced a case of liposarcoma originated from the gallbladder, which is extremely rare - only one case has been reported[2]. Our case is the longest surviving case treated by surgery in previously reported cases. Herein, we report the case of gallbladder liposarcoma and review the literature.

A 49-year-old woman was referred to our department for high fever and a huge abdominal mass in October 2001. At admission, she was emaciated (body height: 150cm, body weight: 42.5 kg, blood pressure: 100/60 mmHg, pulse rate: 78/min, body temperature: 38.4°C); the elastic huge mass, about 30 cm in diameter, was palpated at the right side of the abdomen. Laboratory data revealed severe anemia (hemoglobin: 76 g/L), leukocytosis (white blood cells count: 10 920/mm3), hypoproteinemia (total protein: 5.8 g/dl, Albumin: 19 g/L) and elevation of serum alkaline phosphatase (ALP) and γ-glutamyl transpeptidase (GTP) levels (ALP: 841 IU/l, γ-GTP: 247 IU/l). Serum levels of tumor markers (carcinoembryonic antigen [CEA], carbohydrate antigen [CA] 19-9, and alpha-fetoprotein [AFP]) were within their normal ranges. By computed tomography (CT), the tumor, which was detected as a low-density area with irregular enhancement, occupied the right hepatic lobe and the peritoneal cavity (Figure 1). As shown by the magnetic resonance imaging (MRI) series, the tumor had homogeneous hypo-intensity on T1-weighted MRI (Figure 2A) and heterogeneous hyper-intensity on fat-suppressed T2-weighted MRI (Figure 2B). Furthermore, MR cholangiography showed that it apparently compressed the right lobe of the liver to the cranial side and the gallbladder to the medial-caudal side (Figure 2C,2D). Stronger enhancement of tumor was revealed by CT during selective cystic arteriography (Figure 3) than that during other arteriographies (i.e., right hepatic artery, middle hepatic artery, left hepatic artery, right subphrenic artery, and right renal artery). Based on those findings, on 23 October 2001, we performed an operation under the preoperative diagnosis of angiosarcoma originated from the liver or the gallbladder. 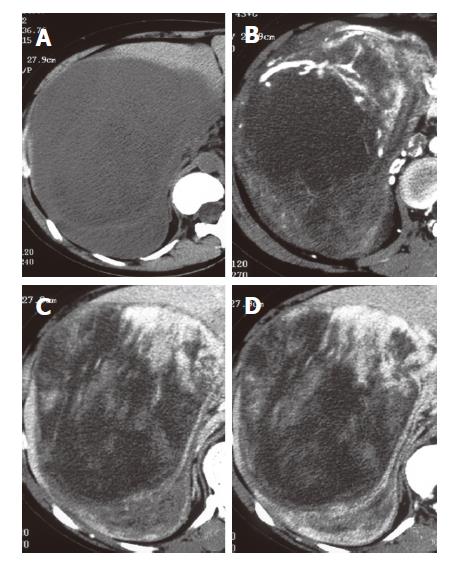 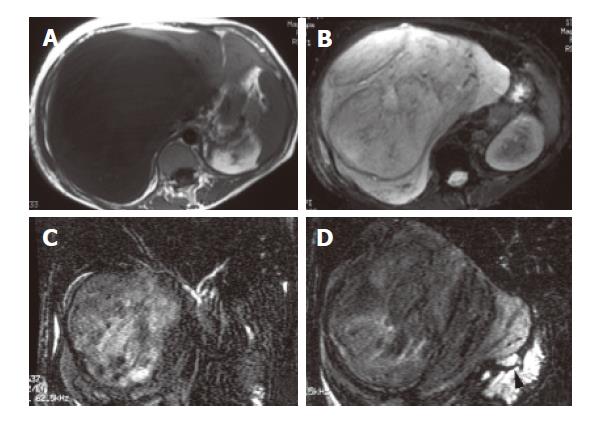 Figure 2 Preoperative MRI images. A: T1-weighted;B:fat-supressed T2-weighted;B and C: MR Cholangiography. The tumor appeared hypointense on T1-weighted images (A) and hyperintense on fat-suppressed T2-weighted images (B). MR cholangiography revealed that the tumor compressed the right lobe of the liver to the cranial side (C) and gallbladder to the medial-caudal side(arrow head:gallbladder) (D). 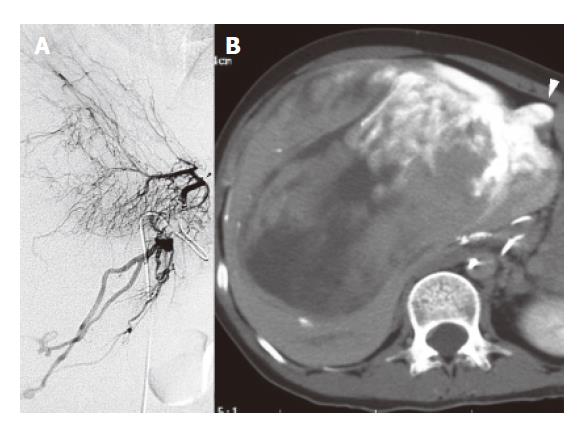 At laparotomy, a huge tumor occupied the right side of the abdomen; the liver was displaced to the cranial side. The tumor infiltrated tightly into the gallbladder, but not to the liver and the retroperitoneum, thus we performed a resection of the tumor with cholecystectomy. The cystic lymph node enlarged and atypical cells were detected in this node from frozen section. The resected specimen weighed 3 300 g and gross examination revealed a yellowish tumor measuring 25 cm × 23 cm, but the mucosa of the gallbladder was intact with the cholesterosis alone. The cutting section of the tumor appeared whitish solid and included hemorrhage and necrosis in parts (Figure 4A). Histological examination revealed that the tumor mainly comprised spindle cells with cellular pleomorphism, and included lipoblasts (Figure 4B). The tumor was almost capsulated (Figure 4C), however the capsule annihilated a border of the posterior wall of the gallbladder, in which these tumor cells were detected in the muscle layer but did not extended to the submucosal layer (Figure 4D). From these findings, we finally diagnosed pleomorphic type liposarcoma originated from the gallbladder with extramural growth (T4N1M0: stage IV). 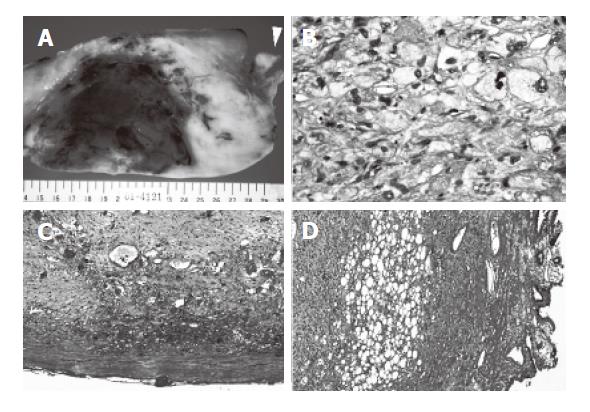 The patient was discharged 24 d after the first operation. Computed tomography (CT) revealed the tumor size as 4.5 cm in Couinaud’s segments 4 and 5 of the liver on August 2002. At 10 months after the first operation, she underwent extended right hepatectomy and pancreatoduodenectomy including partial resection of the portal vein according to the intraoperative findings of liposarcoma metastases that were recognized pathologically by frozen sections. Pathological examination of the specimen showed not only liposarcoma metastases in the right lobe of the liver, but also those extending to the surrounding fatty tissue of the hilus and left hepatic bile ducts, the hepatoduodenal ligament, and the pancreas head. She underwent CT scanning every 3 or 4 months at the outpatient clinic. On February 2004, CT revealed tumors of 7 cm and 5 cm in Couinaud’s segments 4 and 2 of the liver, respectively, and the recurrent tumor of 1.5 cm in the upper lobe of the left lung. She underwent partial resections of Couinaud’s segments 4 and 2 with a partial resection of intrahepatic left portal vein and partial resection of the left lung under a thoracic scope at 29 mo and 30 mo respectively, after the first operation. At more than 3 years 6 mo after the first operation, she is now continuing to enjoy a good quality of life.

Liposarcoma is the second-most common soft tissue sarcoma among adults. Its incidence was reported as 10-12% among soft tissue sarcomas. The two major sites of liposarcoma are the lower extremities and retroperitoneum: their respective incidences are 30.1% and 18.5%. Other less common sites have been reported: the inguinal and paratesticular regions, chest wall, breast, and mediastinum[1]. Notwithstanding, few cases of intra-abdominal liposarcoma have been reported. Furthermore, most of those are from the mesentery and peritoneum[1].

In our case, the original sites of liposarcoma were considered to be the posterior wall (hepatic-side surface) of gallbladder, according to operative and pathological findings. At the first operation, the tumor was dissected easily from the liver and the retroperitoneum. The tumor was almost capsulated histologically, except the hepatic surface of the gallbladder. Furthermore, the tumor cells originated from the muscular layer only at the hepatic side of gallbladder, where the capsule disappeared. Generally, liposarcoma takes its origin from primitive mesenchymal cells rather than mature adipose tissue; it often seems to arise from intermuscular fascial planes or richly vascular structures[1]. From these findings, we concluded that the tumor originated from the muscular layer of the gallbladder on the hepatic surface. Thereafter, it might grow rapidly and extramurally.

In this case, we also want to emphasize that we could preoperatively make an accurate diagnosis about the origin of the tumor. It is usually very difficult for many doctors to confirm the origin of such a huge abdominal sarcoma pre- and post-operatively, however, our case was detectable because we could comprehend the relation of the tumor to the surrounding organs (in our case; liver, gallbladder, and bile duct) from MR cholangiography and the main feeding artery of the tumor from selective arteriography with CT imaging (CT during cystic arteriography). These imaging studies might be useful to detect the origin of such a huge abdominal mass as our case.

Among the rare cases of intra-abdominal liposarcoma, the mesentery, omentum, and gastrointestinal organs are its common sites. However, liposarcoma of the liver and the biliary system are exceedingly rare and have been reported in only 10 cases, including our case (Table 1). Those patients were younger than patients with other malignant tumors: two of those cases were infants. No differences of sex were apparent in these patients. Seven of the cases received medications, but three cases could not because of complications by the tumors. Only one case of seven medicated patients was unresectable and thus got regional chemotherapy and radiation therapy. Prognoses of liposarcoma of the liver and gallbladder seem to be poor. Previous reports about liposarcoma have described cases among which six of eight patients died, three cases were inoperable because of rapid tumor growth, two cases were recurrent, and one ended in death by complications engendered by a difficult operation. Generally, pleomorphic liposarcoma, as in our case, is defined as a high-grade pleomorphic sarcoma containing multivacuolated lipoblasts and rare form with a poor prognosis [11,12]. It occurs in about 10% of liposarcoma cases and has a 45% local recurrence rate and 42.5% metastatic rate. Five-year overall, metastasis-free, and local recurrence-free survival was shown respectively as 57%, 50%, and 48%[13]. From these reports, she had better postoperative course than many cases of liposarcoma in Table 1, and is now receiving a good quality of life, because the primary and recurrent tumors were located on curatively resectable area luckily and we could detect the recurrences soon by using CT frequently. In the future, it is also important to find recurring tumors using imaging studies and to resect them as soon as possible for her quality of life.

In conclusion, we experienced a case of liposarcoma of the gallbladder that has not yet been reported in detail and for which the patient has survived long after the primary operation because of two operations that were undertaken aggressively.