AIM: To detect the expression of pituitary adenylate cyclase-activating polypeptide receptor 1 (VPCAP1-R) and VPCAP2-R mRNA in gallbladder tissues of patients with gallstone or gallbladder polyps.

CONCLUSION: The abnormal expression of VPCAP2-R mRNA in gallbladder tissue may play a role in the formation of gallbladder stone and gallbladder polyps.

Gallbladder motility and bile delivery to the duodenum involve a complex interplay between neural and hormonal factors. Acetylcholine, cholecystokinin (CCK) and vasoactive intestinal polypeptide (VIP) in the nerve endings function as neurotransmitters, leading to contraction and relaxation of the gallbladder musculature [1-3].

VIP can relax the gallbladder, reduce gallbladder tone and inhibit CCK- stimulated contraction in a dose-dependent manner [4]. VIP exerts its action through receptors on the gallbladder wall and binds to two subtypes of VIP receptors, previously called VIP1 and VIP2 receptors. Because these receptors also have a high affinity for pituitary adenylate cyclase-activating polypeptide (PACAP), they have recently been named VPCAP1 and VPCAP2 receptors. The purpose of this study was to detect the expression of VPCAP1-R and VPCAP2-R mRNA in gallbladder tissue and to define their role in the formation of gallstone and gallbladder polyps.

Total RNA was extracted from 100 mg gallbladder tissue samples using TRIzol reagent according to the manufacturer’s instructions. The concentration and purity of RNA were determined by a spectrophotometer at 260 and 280 nm. All RNA isolates had an OD260:OD280 value of 1.8:2.0, indicating clean RNA isolates.

Two micrograms of total RNA was used as a template for subsequent RT-PCR. The total RNA was mixed with 1 µL oligo(dT)15, 1 µL dNTPs and H20 and preheated at 65 oC for 1 min to denature the secondary structure. The mixture was then cooled rapidly to 30 oC and then 10 µL 2 X RT buffer, 4 µL 25% MgSO4, 1 µL 22 u/µLAMV, 0.5 µL40 u/uL RNase-inhibitor were added. Reverse transcriptase was added for a total volume of 20 µL. The RT mixture was incubated at 65 oC for 30 min and then stopped by heating at 98 oC for 5 min and cooling at 5 oC for 5 min.

The PCR products were analyzed by electrophoresis on 2% agarose gels containing ethidium bromide. The gels were photographed on top of a 280 nm UV light box. The gel images were captured with a digital camera and analyzed with the ID Kodak Imager analysis program. RT-PCR values were presented as a ratio of the receptor mRNA signal divided by the β-actin signal. 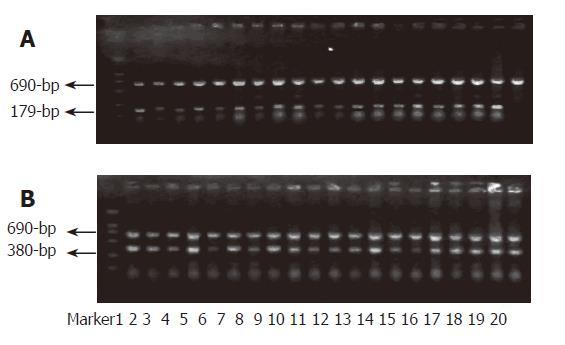 Vasoactive intestinal peptide (VIP), a 28-amino acid peptide capable of inducing vasodilation, was first isolated from porcine intestine[5].It has many other actions as a neuroendocrine hormone and neurotransmitter. It may play an important role in the central nervous system (CNS)[6]. VIP can stimulate prolactin secretion from the pituitary[7], regulate noncholinergic trans-synaptic functions of the adrenal medulla[8], and inhibits proliferation of T cells in the immune system[9]. Other functions of VIP include protection against oxidant injury[10], stimulation of electrolyte secretion[11], relaxation of smooth muscle[12]. Intrinsic neurons modulate gallbladder function. Nitric oxide synthase (NOS) and VIP are present in gall bladder neurons and nitric oxide and VIP modulate its epithelial functions[13]. Intravenous infusion of VIP is associated with the secretion of bicarbonate from the gallbladder mucosa[14]. Relaxation of canine gallbladder depends on nerve stimulation by adrenergic and non-adrenergic as well as non-cholinergic (NANC) nerves. Nitric oxide and VIP contribute to relaxation of NANC nerves in canine gallbladder[15]. The effect of VIP on guinea pig gallbladder in vitro suggests that VIP has no effect on basal tone, but produces a 26.7 ± 6.6% relaxation of CCK-contracted strips[4].

The first recombinant receptor for VIP is isolated from rat lung by Ishihara et al [16]. This receptor is originally described as the VIP receptor and subsequently designated as the VIP1 receptor[17]. Messenger RNA encoding the VPCAP1 receptor is widely distributed in CNS[18], peripheral tissues of liver[19], lung[20] and intestine[19] as well as in T lymphocytes[21]. The second receptor that responds to VIP and PACAP with comparable affinity has been cloned from the rat olfactory bulb by Lutz et al [17]. The highest concentration of messenger RNA is found in CNS[18]. The receptor is also present in several peripheral tissues of pancreas, skeletal muscle, heart, kidney, adipose tissue, testis and stomach[22-25].