AIM: To examine the paclitaxel concentrations in plasma and ascites after its intravenous administration in patients with ascites due to peritonitis carcinomatosa resulting from advanced gastric cancer.

METHODS: Two patients with ascites due to peritonitis carcinomatosa resulting from gastric cancer were included in this study. The paclitaxel concentrations in plasma and ascites were investigated for 72 h in case 1 and 168 h in case 2 after intravenous administration.

Paclitaxel (PTX) is a potent inhibitor of cell replication and was originally isolated from the bark of the tree Taxus brevifolia. The anti-mitotic activity of PTX results from its effectively blocking the late G2 and M phases of the cell cycle. PTX has significant antitumor activity in several human tumors, such as advanced ovarian, lung, and breast cancers[1]. Chang et al[2] demonstrated that PTX inhibited the proliferation of gastric carcinoma cell lines at clinically attainable concentrations. Several reports have shown that PTX in combination chemotherapy with 5-fluorouracil and cisplatin is effective in the treatment of advanced gastric cancer[3-8].

We have recently completed two phase I clinical studies of combination chemotherapy involving weekly administration of PXT with either 5-fluorouracil or cisplatin. The recommended dose of PTX was 80 mg/m2 in both regimens. Some cases with peritoneal carcinomatosis showed a marked decrease in malignant ascites following combination chemotherapy. In the present study, we investigated changes in PTX concentration in plasma and ascites over time to determine the effectiveness of weekly administration of PTX in treating malignant ascites.

We investigated 2 cases with gastric carcinoma and malignant ascites. Case 1 was recruited in our phase I study of combination chemotherapy involving 5-fluorouracil and weekly administration of 80 mg/m2 PTX. Case 1 received 60 mg/m2 of PTX intravenously. Case 2 was involved in our phase II study of combination chemotherapy involving cisplatin and weekly administration of 80 mg/m2 PTX intravenously. The PTX concentrations in plasma and ascites were measured for both the cases.

PTX was administrated by drip infusion for 1.5 h following standard prophylaxis for taxol-associated hypersensitivity reactions with dexamethasone (20 mg iv), diphenhydramine (25 mg po), and ranitidine (50 mg iv). After taking informed consent from the patients, samples from blood and ascites were taken prior to PTX administration, immediately after PXT administration, then 4, 8, 12, 24, 36, 48, 60, and 72 h after PXT administration in case 1, and after a further 84, 96, 108, 120, 132, 144, 156, and 168 h in case 2. Ascitic fluid was not drained for the duration of the study and the volume taken for measurement of PTX concentration was limited to 5 mL. Ascites and blood samples were collected in heparinized tubes, centrifuged, and the supernatant was stored at -20°C until assay. The PTX concentrations in plasma and ascites were analyzed by high-performance liquid chromatography as previously described[9]. 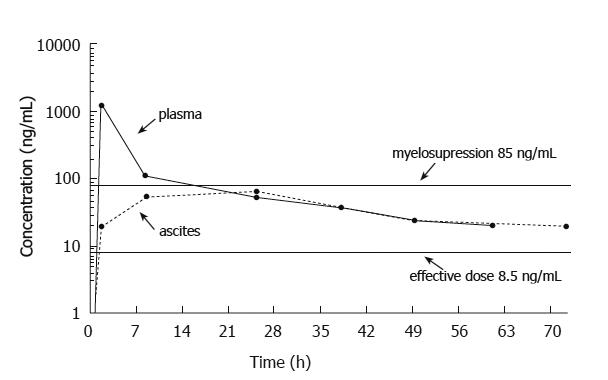 Figure 1 Concentrations of PTX in plasma and ascites in case 1 administrated with 60 mg/m2 PTX intravenously for 1. 5 h. 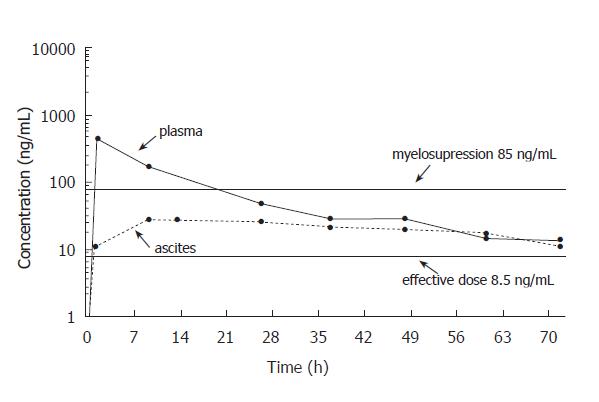 Figure 2 Concentrations of PTX in plasma and ascites in case 2 administrated with 80 mg/m2 PTX intravenously for 1. 5 h.

Both cases showed marked decrease of ascites after chemotherapy. The CT scan showed that the amount of ascites was markedly decreased after 2 courses of combination chemotherapy of 5-fluorouracil and PTX (Figure 3). 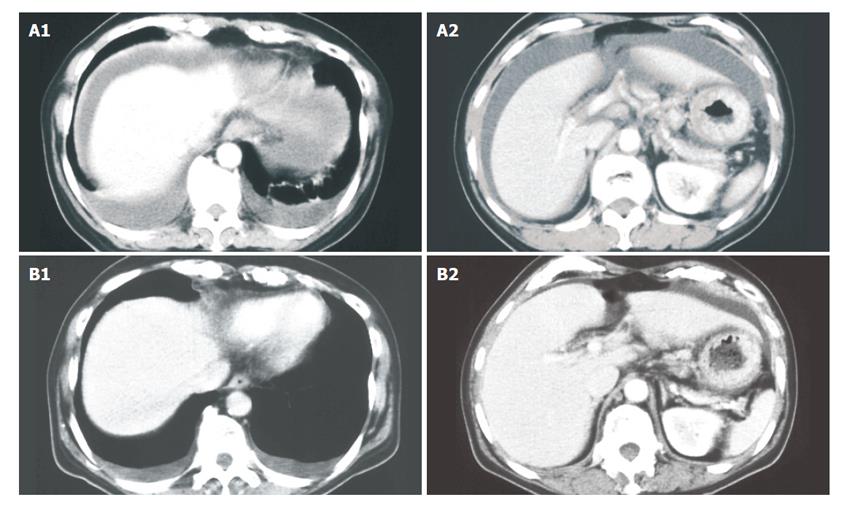 Figure 3 CT scanning of case 1 showing markedly decreased amount of ascites after 2 courses of the combined chemotherapy of 5-fluorouracil and PTX. A1, A2: before chemotherapy; B1, B2: after chemotherapy.
DISCUSSION

Gastric cancer is one of the most common cancers in Japan. Although advances in early diagnosis and surgical technique have improved the outcome of treatment for gastric cancer, optimal chemotherapy regimes have not been determined for advanced or recurrent gastric cancer. The most serious recurrence of gastric cancer is peritoneal carcinomatosis and is usually regarded as the terminal stage of advanced gastric cancer. At present, there are no effective therapeutic regimes for control of malignant ascites due to peritoneal carcinomatosis, which is essential for quality of life. Several reports have demonstrated that intraperitoneal infusion of anti-cancer agents is effective only to a limited shallow area beneath the peritoneum[10,11]. Inadequate exposure of the peritoneum to anti-cancer drugs presents a limitation to their effectiveness. Intraperitoneal administration of PTX has been used to treat ovarian cancer[12-14], but there is limited information on the levels of PTX in ascites following intravenous administration. O’Boyle et al[15] investigated the level of PTX in sera and in cerebrospinal, ascitic and pleural fluids by immunoradiometric assay and conventional radioimmunoassay and showed the maintenance of high levels of PTX in ascitic fluid in a patient with ovarian carcinoma treated with 135 mg/m2 PTX.

Several reports have demonstrated that systemic administration of PTX is effective in the control of malignant ascites in gastric cancer patients[16,17]. In the present study, we showed a marked decrease in ascitic fluid volume after combination chemotherapy involving PTX and 5-fluorouracil (case 1), and PTX and cisplatin (case 2).

Chang et al[2] demonstrated that exposure of cells to 0.01 μmol/L of PTX for 24 h was cytotoxic. In another study, Gianni et al[18] revealed that exposure of plasma to PTX concentrations over 0.05 μmol/L led to myelosuppression and that a concentration of 0.1 μmol/L was clinically relevant. The clinical relevant threshold of 0.1 μmol/l is consistent with findings from other investigators[19-21]. Taken together, the above findings suggest that the clinically effective range for PXT is 0.01 to 0.1 μmol and this range was applied to the present study.

The pharmacokinetic data of the present study revealed that PTX remains within the effective dose range in malignant ascites for at least 72 h following systemic administration. The peak plasma level of PTX varies according to case and peaks immediately after administration. These results are consistent with our previous investigation of 36 cases recruited in two Phase 1 studies (submitted for publication). The observed variation in peak PXT levels according to case may be the result of slight time differences between administration and blood sampling during the period of rapid increase in PTX levels following administration.

PTX has a bulky molecular structure, high molecular weight, and an affinity for binding proteins found at high levels in the peritoneal cavity, especially in malignant effusions. For these reasons, the intraperitoneal clearance of PTX is extraordinarily low, probably the lowest of any known anti-neoplastic agent. As a result of the low clearance rate of PXT from the peritoneal cavity, biologically relevant concentrations can be sustained for long periods allowing maximal exposure to cancer cells. It is well established that the cytotoxic activity of PTX is related to duration of exposure[22-25]. In conclusion, the inherent properties of PXT allowing its sustained exposure to cancer cells in ascites make this drug an effective candidate in the control of malignant ascites. As administration of PXT is systemic, PXT may also be effective for the control of cancer cells in other regions of the body.