Hepatic fibrosis is a common consequence of chronic liver disease and results from the activation of hepatic stellate cells (HSC). After liver tissue damage, HSC undergo a transition from quiescent to activated phenotypes and increase proliferation and synthesis of extracellular matrix (ECM)[1-4]. Activated HSC express matrix metalloproteinases (MMPs), the key enzyme in the degradation of ECM, but also expresses the tissue inhibitors of matrix metalloproteinases (TIMMPs). Many cytokines may affect the activation of HSCs and regulate the secretion of MMPs and TIMMPs[5,6].

Mitogen-activated protein kinase (MAPK）plays an important role in the transduction of extracellular signals to the nuclei[7,8]. Four groups of mammalian MAPK-family have been characterized, namely extracellular signal-regulated kinases (ERK), c-jun N-terminal kinase (JNK), p38 and ERK5. Studies indicate that JNK and p38 are essential members of MAPK supper family and play a role in the responses of HSC to hepatic injury and inflammation[9,10]. JNK and p38 are activated by lipopolysaccharide endotoxin(LPS),tumour necrosis factor-α (TNF-α) and interleukin-1 (IL-1). Activated JNK translocates to the nuclei, activates transcription factors and involves a wide range of cellular events, including cell proliferation, differentiation and apoptosis[11,12].

IL-1 is a pro-inflammatory cytokine that has a key role both in the inflammatory response and in autoimmune diseases[13-17]. Although HSC activation is insufficiently documented, IL-1 is accepted as a potent cytokine for fibrosis of other organs such as the heart, gingival tissue, and kidney[15,18,19]. Recent findings suggest that activation of MAPKs participates in intracellular signaling events induced by IL-1. In this study, we demonstrated the relationship between effects of interleukin-1β up-regulating TIMMP-1 mRNA expression and MAPK signal transduction in rat HSC.

HSC cell line (CFSC) was established and presented by Professor Greenwell, Marion Bessin Liver Research Center, Albert Einstein College of Medicine. The phenotype of CFSC was activated HSC obtained from CCl4-induced cirrhotic liver of rats after spontaneous immortalization in culture. Cells were seeded and grown at 37°C in 50 mL/L CO2 RPMI 1640 supplemented with 10% fetal calf serum (FCS), 4 mmol/L L-glutamine, 1 mmol/L HEPES and 100 U/mL penicillin/streptomycin. When the cells were 80%-90% confluent, HSC were serum-starved in medium containing 1% FCS for 12 h. HSC of IL-1β groups were treated with IL-1β (10 ng/mL)for 24 h, but HSC of control group were treated with nothing, then TIMMP-1 mRNA expression in rat HSC was examined. After stimulation with IL-1β(10 ng/mL) for 0, 5, 15, 30, 60, and 120 min, the activities of JNK and p38 were examined. To study the relationship between IL-1β up-regulating TIMMP-1 mRNA expression as well as JNK and p38 signal pathway, JNK inhibitor SP600125 and p38 inhibitor SB203580 were used to inhibit JNK and p38 activities. When HSC were pretreated for 30 min with 1% dimethyl sulfoxide (DMSO, a solvent of SP600125 and SB203580), SP600125 or SP203580 was then treated with IL-1 beta (10 ng/mL)for 24 h, and subsequently TIMMP-1 mRNA expression in rat HSC was examined. SP600125 and SB203580 were prepared as previously described[20,21].

RT-PCR was performed to measure the expression level of TIMMP-1 mRNA in rat HSC. The sequences of the primers used for TIMMP-1 sense and antisense are 5’-TCC CCA GAA ATC ATC GAG AC-3’ (sense) and 5’-ATC GCT GAA CAG GGA AAC AC-3’ (antisense), a 329 bp fragment was amplified. The sequences of the primers used for GAPDH sense and antisense are 5’-GGC CCC TCT GGA AAG CTG TG -3’ (sense) and 5’-CCG CCT GCT TCA CCA CCT TCT-3’ (antisense), a 239 bp fragment was amplified. Total RNA was extracted from cultured HSC using TRIzol reagent following the manufacturer’s instructions. Then 2 µg RNA of each sample was reverse-transcribed using random primer and reverse transcriptase in 25 µL of volume. Subsequently PCR was carried out in 25 µL reaction mixture containing 5 µL cDNA template, 2.5 µL 10×PCR buffer, 1 µL 10 mmol/L dNTPs, 1.5 µL 15 pmol/L TIMMP-1 or GAPDH primers, 2.5 U Taq DNA polymerase. Thirty-five cycles of PCR amplification for TIMP-1 and 30 cycles of PCR amplification for GAPDH were carried out for 5 min at 94°C for initial DNA denaturation, followed by individual cycles of denaturation (at 94°C for 45 s), annealing (at 56 °C for 35 s), polymerization (at 72°C for 45 s) and then a final extension at 72°C for 5 min. PCR products were electrophoresed on 2% agarose gel, stained with ethidium bromide (EB) and quantitated using Gel-Pro Analyzer Version 3.0. The band intensity of TIMMP-1 was compared to that of GAPDH, and the amount of TIMMP-1mRNA was estimated.

Western blot was performed to measure IL-1β-induced JNK and p38 activation in rat HSC. The HSC were lysed on ice by lysis buffer containing 50 mol/L Tris-HCl ( pH 7.5), 150 mol/L NaCl, 10% glycerol, 1% Nonidet P-40, 1% SDS, 0.5% deoxycholate, 1.0 mol/L PMSF, and 1 mol/L sodium orthovanadate for 30 min. The cell lysate was centrifuged at 10 000 r/min for 10 min and the supernatant was collected for Western blot analysis. Protein concentration was measured using Coomassie brilliant blue G-250 (CBB)kit following the manufacturer’s instructions. Protein samples (50 µg) were subjected to 10% SDS-PAGE gel electrophoresis and then transferred onto a nitrocellulose membrane by electro-blotting. The membrane was incubated at 4 °C overnight in Tris-buffered saline/Tween 20 (20 mol/L Tris-HCl, pH 7.4, 150 mol/L NaCl, 0.05% Tween 20) with 5% nonfat milk. After blocking, the membrane was incubated for 5 h at room temperature in TBS buffer (50 mol/L Tris-HCl, 150 mol/L NaCl) containing an 1:100 dilution of mouse anti-phospho-JNK monoclonal antibody,anti-phospho-p38 monoclonal antibody or rabbit anti-β-actin polyclonal antibody. Then the membrane was incubated for 2 h at room temperature in TBS containing an 1:300 0 dilution of anti-mouse IgG (H+L)/HRP,1:100 0 dilution of anti-mouse IgM (H+L)/HRP or 1:300 0 dilution of anti-rabbit IgG (H+L)/HRP antibody. Specific binding of the antibody was visualized by the enhanced chemiluminescence (ECL) detection system following the manufacturer’s instructions. The intensity of the bands was determined by scanning video densitometry using Gel-Pro Analyzer Version 3.0. The levels of phospho-JNK protein and phospho-p38 protein were normalized to the level of β-actin protein. 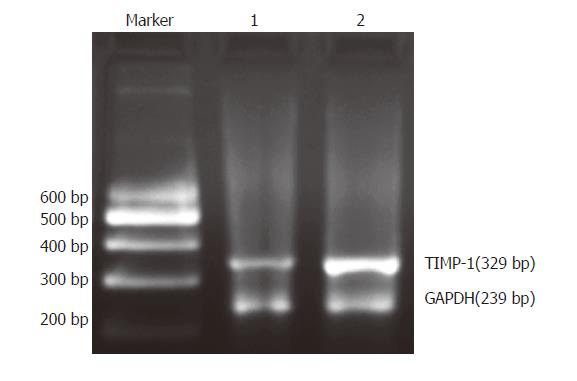 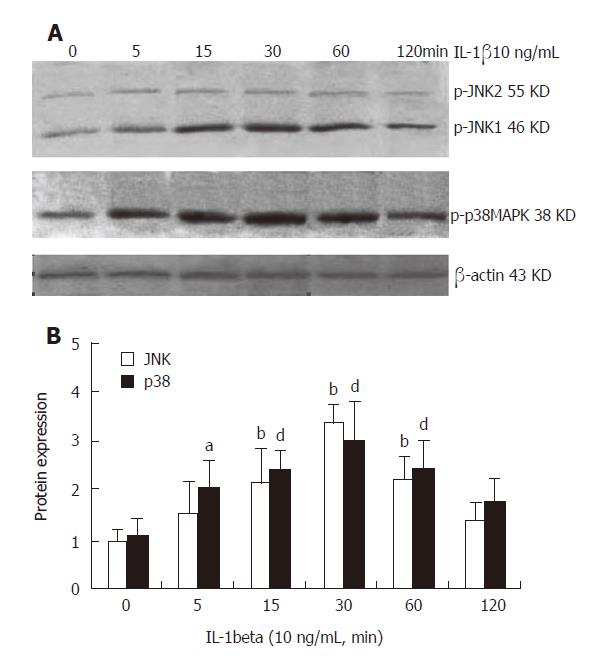 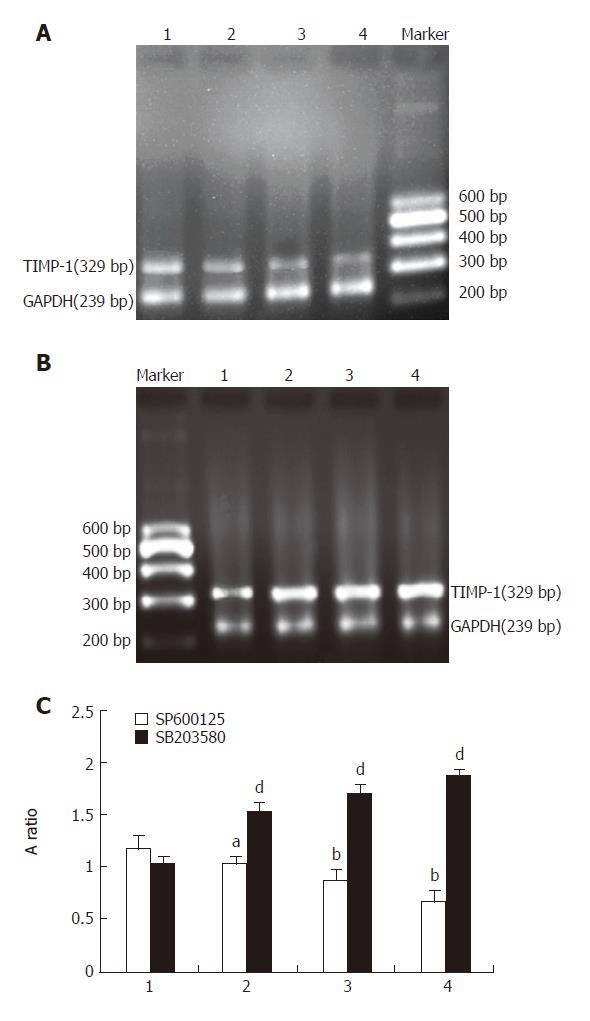 Hepatic fibrosis represents a repairable process of chronic hepatic damages including viral infection, toxic damage, alcohol, as well as autoimmune reactions. In response to liver injury of any etiology, the normally quiescent HSC undergo a progressive process of trans-differentiation into α smooth muscle action (α-SMA) on positive myofibroblast-like cell-activated HSC. By increasing secretion of extracellular matrix proteins (TIMMP-1 and TIMMP-2), activated HSC is responsible for deposition and accumulation of the majority of excess ECM in the fibrotic liver. Furthermore, activated HSC can contribute to the fibrogenic process through their ability to secrete and respond to a wide range of cytokines and growth factors, such as IL-1, IL-6, transforming growth factor β(TGF-β) and platelet-derived growth factor (PDGF). MMPs are a family of zinc metalloendopeptidases and responsible for the turnover of all the ECM components. TIMMPs, specific inhibitors of MMPs, are the key regulators of MMP activity and ECM degradation. Some studies have shown that TIMMP is a very important promoting factor for hepatic fibrosis and inhibits MMPs to decompose ECM. In the liver, TIMMP-1 and TIMMP-2 have been identified and TIMMP-1 plays a more important role in the pathological process of hepatic fibrosis than TIMMP-2[22-26].

Inflammation is a key component of chronic liver disease. IL-1 is one of the major mediators regulating inflammatory response[27,28]. There are two forms of IL-1, namely IL-1alph and IL-1beta with indistinguishable biological activities. IL-1 may be involved in hepatic fibrosis, causing hepatic tissue injury which induces the fibrotic response and participating in hepatic fibosis by promoting the deposition of ECM[5,7,29,30]. In the present study, TIMMP-1 mRNA expression after treatment with IL-1beta for 24 h was much higher than that in control group. Strong expression of TIMMP-1 inhibits the degradation of collagen by MMPs, thus promoting the deposition of ECM. The continuous deposition of ECM in the liver finally results in hepatic fibrosis, suggesting that IL-1beta has a direct action on hepatic fibrogenesis through stimulating TIMMP-1 production in activated HSC.

As we known, IL-1 could activate the MAPK cascades including ERK, p38 and JNK[31]. In 3 groups of the MAPK family, the role of ERK has been studied in HSC[9,10,30,32], but the role of p38 and JNK in regulating TIMMP-1 expression in HSC is poorly understood. The aim of our study was to evaluate the effect of p38 and JNK on TIMMP-1 mRNA expression induced by IL-1beta in HSC. Our data demonstrated that following stimulation with IL-1beta, the 2 MAPK pathways including p38 and JNK were all activated. In comparison to control group (without IL-1beta treatment), phosphorylation of JNK was first detected at 15 min in HSC and reached its peak at 30 min. The values restored to original levels at 120 min. In comparison to control group (without IL-1beta treatment), a significant increase of p38 activity was first observed at 5 min for p38 peaked at 30 min. The values returned to control levels at 120 min (Figure 2). The data showed that IL-1beta could activate JNK and p38 MAPKs in a time-dependent manner in rat HSC．

In summary, differential signal transduction pathway triggered by IL-1β can lead to TIMMP-1 gene up-regulation in rat HSC. A better understanding of these pathways may contribute to the development of more rational therapies to counteract the devastating effects of hepatic fibrosis.