AIM: To investigate the protective effect and mechanism of alanyl-glutamine dipeptide (Ala-Gln) against hepatic ischemia-reperfusion injury in rats.

METHODS: Rats were divided into group C as normal control Group (n=16) and group G as alanyl-glutamine pretreatment (n=16). Rats were intravenously infused with 0.9% saline solution in group C and Ala-Gln -enriched (2% glutamine) 0.9% saline solution in group G via central venous catheter for three days. Then all rats underwent hepatic warm ischemia for 30 min followed by different periods of reperfusion. Changes in biochemical parameters, the content of glutathione (GSH) and the activity of superoxide dismutase (SOD) in liver tissue, Bcl-2 and Bax protein expression and morphological changes of liver tissue were compared between both groups.

CONCLUSION: Our results suggest that Ala-Gln pretreatment provides the rat liver with significant tolerance to warm ischemia-reperfusion injury, which may be mediated partially by enhancing GSH content and regulating the expression of Bcl-2 and Bax proteins in the liver tissue.

Temporary clamping of the portal triad, ie, inflow occlusion by the Pringle’s maneuver, is a common strategy to minimize bleeding during hepatic resection. Unfortunately, this method resulted in hepatic ischemia-reperfusion (I/R) injury and may cause postoperative functional disorder of the liver. Development of new pharmaceutical strategies to attenuate hepatic I/R injury is important for achieving a better clinical outcome. Hepatic I/R injury factors usually include oxygen radical species, intracellular calcium overloading, inflammatory cytokines and infiltration of neutrophils[1]. However, its mechanism has not been fully elucidated.

Glutamine (Gln) is a conditionally essential nutrient during serious injury or illness, and plays a vital role in the metabolism of tissue[2-4]. Recently, Gln has been demonstrated to protect against I/R injury of gut, heart and skeletal muscle and its possible mechanism is partially related to preservation of the content of glutathione (GSH)[5-7].

Recently, apoptosis has been indicated as an important mode of cell death during hepatic I/R injury[8]. Apoptosis is governed by a number of regulating genes, such as bcl-2 and bax and the ratio of bcl-2 to bax determines survival or death following an apoptotic stimulus[9]. Animal studies demonstrate that GSH depletion is associated with decreased bcl-2 gene expression and increased apoptosis in cholangiocytes[10]. Overexpression of bcl-2 gene by transferring this gene into hepatocytes with adenovirus is resistant to hepatic I/R injury[11].

Male Wistar rats weighing 250-300 g (supplied by the Experimental Animal Center of Shengjing Hospital) were housed in a standard animal laboratory with free activity and access to water and chow. They were kept under constant environment conditions in a 12 h light-dark cycle. All operations were performed under clean conditions.

Intravenous drugs and other relevant chemicals

Under urethane anesthesia (intraperitoneal injection, 10 mg/kg), a silastic catheter was inserted through the right external jugular vein into the superior vena cava, tunneled subcutaneously and brought out through the skin of mid-scapular region. A flexible spring guarded the catheter, and then hooked up to an infusion pump. All rats were maintained in individual metabolic cages. After catheterization, all rats received intravenously 0.9% saline solution at a constant rate by a pump (2 mL/h) with free activity and access to water and chow for 3 d. Then, all rats were randomly divided into Group C infused with 0.9% saline solution (n =16) and group G infused with Ala-Gln-enriched (2% glutamine) 0.9% saline solution (n =16). After 3 d, under urethane anesthesia (intraperitoneal injection, 10 mg/kg) a midline laparotomy was performed and all structures in the portal triad to the liver were clamped for 30 min followed by different periods of reperfusion. Liver tissues and blood were sampled at 1 and 24 h after reperfusion for liver function tests, antioxidant enzyme measurement, Bcl-2 and Bax protein expression and morphological examination.

Blood samples collected at 1 and 24 h after reperfusion were used to measure the alanine aminotransferase (ALT) and lactic dehydrogenase (LDH) levels with a standard biochemistry automatic analyzer.

The content of GSH and activity of SOD in rat liver tissue were measured following instructions of the commercial kit.

The data were presented as mean ± SD. Student’s t test was performed for the biochemical parameters and antioxidant enzyme levels. P < 0.05 was considered statistically significant. Software SPSS11.0 was used in all statistical analyses. 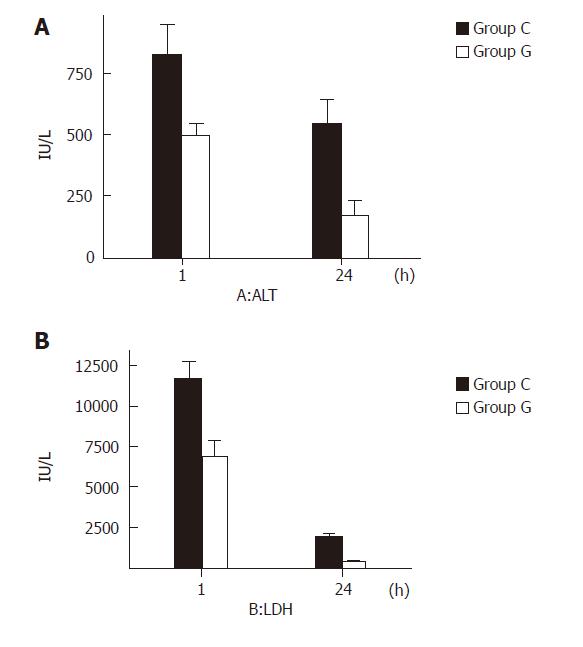 Figure 1 Liver function 1 and 24 h after reperfusion of ALT (A) and LDH (B) in groups C and G.
Antioxidant enzyme level

One and 24 hours after reperfusion, the GSH content in the liver tissue of group G was significantly higher than that in group C (P < 0.05). There was no statistical difference in the activity of SOD between the two groups (P >0.05, Figures 2A and 2B) 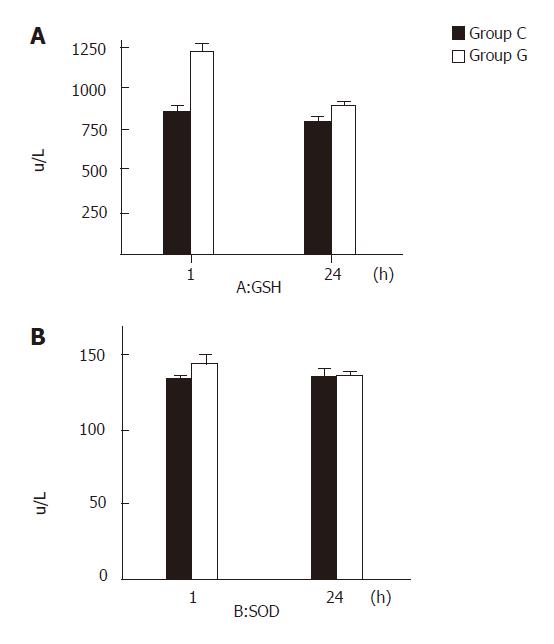 Figure 2 GSH content (A) and SOD activity (B) 1 and 24 h after reperfusion in groups C and G.
Bcl-2 and Bax expression

One hour after reperfusion, only slight swelling and less fatty and vacuolation degeneration were found in hepatocytes of group G. However, severe swelling was observed in group C along with more fatty and vacuolization degeneration in hepatocytes. Compartment of hepatic sinus became narrow or disappeared. Infiltration of neutrophils and hemorrhage were also observed. Twenty-four h after reperfusion, the swelling and vacuolization degeneration in group G became worse, but the hepatic cellular structure was still clear and only single-cell necroses were observed. However, derangement of constitution was observed in group C along with a few necroses of hepatocytes.

Gln is one of the most abundant amino acid in plasma and plays an important role in the metabolism of body. The circulating and tissue concentrations of Gln diminish precipitously after stress. When Gln is exhausted to a certain extent, a large amount of Gln released from skeletal muscle and a small amount from lung are transported to liver and gut. Recently, Gln has been demonstrated to protect against ischemia-reperfusion injury of gut, heart and skeletal muscle[5-7].

The results of our study indicated that after 30 min ischemia, liver function and morphology were impaired and Gln pretreatment could protect against liver damage.

The exact mechanisms of the protective effect of Gln against ischemia and reperfusion injury of organs and tissues are still incompletely understood. Gln protects against ischemia-reperfusion injury of gut, heart and skeletal muscle by preserving the GSH content in the tissues[5-7]. GSH is an important endogenous antioxidant that protects against oxygen free radical injuries and intravenous GSH administration during reperfusion of ischemic liver can prevent reperfusion injury in rats[13]. The content of GSH is useful for determination of the degree of tissue damage[14]. In this study, Gln pretreatment could obviously increase the GSH content in rat liver tissue, indicating that Gln can protect against hepatic I/R injury by maintaining the relatively high content of GSH in tissue and relieving the cellular oxidant injuries[15].

In addition, Gln pretreatment can also protect against hepatic I/R injury by participating in energy metabolism, increasing the cellular energy metabolism, protecting the structure and function of mitochondria and decreasing the production of oxygen free radicals, leading to less consumption of GSH in liver tissue. A complete inhibition of α-ketoglutarate dehydrogenase activity in the TCA cycle has been observed in hyperoxia-exposed glutamine-deprived cells and Gln could protect α-ketoglutarate dehydrogenase from inactivation under oxidative stress as well as mitochondria from oxidative stress and increase cellular ATP levels[16]. Gln could stimulate the synthesis of glycogen and increase the glycogen store in hepatocytes, reinforcing the ability of liver against cellular oxidant injuries[17]. In this study, mitochondria and glycogen granules were observed in hepatic cytoplasm, mitochondria and rough endoplasmic reticulum were protected.

Gln increases the activity of SOD in liver tissue after stress[18], which was not confirmed in our study due to the model of rat, the number of samples and the dosage of Gln in this experiment.

It was reported that portal triad clamping produces not only ischemic injury of the liver but also portal venous congestion[19]. Acute portal venous congestion for a long period may impair the intestinal mucosal barrier and increase intestinal permeability, causing endotoxemia, bacterial translocation, activation of reactive oxygen radicals and inflammatory cytokines, such as tumor necrosis factor-α (TNF-α)[20-23]. Reperfusion of stagnant portal venous blood with deleterious chemical mediators into the ischemic liver aggravates the liver injury, leading to intra-abdominal sepsis and abscess formation, which is the major cause of postoperative septic complications induced by hepatic I/R injury[24-26]. However, attempts to protect against hepatic I/R injury by alleviating the possible detrimental effects of portal venous congestion have not achieved satisfactory results.

Gln is a precursor for synthesis of nucleic acids and glutathione. It is the main fuel for rapid proliferating and dividing cells such as enterocytes and lymphocytes. It can maintain the metabolism of intestinal mucosal cells directly or indirectly, promote hyperplasia of epithelial cells of ileum and colon, maintain the structure and function of small intestinal mucosal and reduce the increment of intestina permeability[27-30].

Gln can enhance the function of gut-associated lymphoid tissue (GALT) and gut[31]. Gln administration can prevent the depletion of GSH in Peyer’s patches of endotoxaemic mice[32] and promote secretion of mucosal secretory immunoglobulin A (S-IgA), a major effector of the gut-associated lymphoid tissue in the intestine, which can bind to bacteria and prevent their adherence to the epithelium and bacterial translocation[33,34].

Hepatic injury caused by ischemia can be described as necrosis. It was reported that apoptosis of hepatocytes and sinusoidal endothelial cells is a critical mechanism contributing to hepatic I/R injury[8]. The mechanism of apoptosis in ischemia and reperfusion injury usually includes prodtion of oxygen radical species and intracellular calcium overloading[35]. Translocation of bacteria and endotoxin from gut, well documented in hepatic I/R injury, also contribute to the induction of hepatocyte apoptosis. TNF-α induced by endotoxin also can induce hepatocyte apoptosis[36]. A number of genes regulate the apoptotic process. The family of bcl-2-related proteins plays a key role in the regulation of apoptosis.

Bcl-2, a member of the bcl-2-related protein family, can promote cell survival through protein-protein interactions with other bcl-2-related protein family members. Recent studies indicate that overexpression of Bcl-2 protein could reduce hepatocellular apoptosis after reperfusion and protect against hepatic I/R injury[8,11]. Bax, another member of the bcl-2-related protein family, has extensive amino acid homology with Bcl-2 and may form homodimers to accelerate cell death or form heterodimers with Bcl-2 to inhibit cell death. Therefore, changes in the ratio of Bcl-2 and Bax expression may determine survival or death following apoptotic stimuli and attenuate the anti-apoptotic effect of Bcl-2 protein by reducing post-ischemic apoptosis[9,37].

In this study, up-regulation of Bcl-2 protein expression and down-regulation of Bax protein expression in rat liver were found 1 and 24 h after reperfusion, indicating that Gln can protect against hepatic I/R injury by regulating the expression of Bcl-2 and Bax proteins. Our findings suggest that Gln pretreatment could enhance GSH content and protect against oxidative stress in hepatic I/R injury. It has been proved that reduction in the cellular level of GSH increases degradation of Bcl-2 protein and apoptosis[10]. Gln pretreatment can significantly increase cellular ATP levels and synthesis of glycogen and glycogen store in hepatocytes[16,17]. Gln can decrease the diminution of liver tissue ATP content and intracellular calcium overloading maintain the activity of Na+-K+ and Ca+-ATPase, and prevent hepatocellular apoptosis. On the other hand, Gln pretreatment can protect gut barrier and decrease the release of enteric endotoxin and inflammatory cytokines (such as TNF-α), thus reducing the direct pro-apoptotic effect of endotoxin and TNF-α.

In conclusion, glutamine pretreatment can protect against hepatic I/R injury by enhancing GSH content and regulating the expression of Bcl-2 and Bax proteins in liver tissue.