AIM: To study the blood-brain barrier integrity in prehepatic portal hypertensive rats induced by partial portal vein ligation, at 14 and 40 d after ligation when portal pressure is spontaneously normalized.

RESULTS: Forty days after stricture, portal pressure was normalized, plasma ammonia was moderately high, and both dyes were absent in central nervous system parenchyma. All other parameters were reestablished. When portal pressure was normalized and ammonia level was lowered, but not normal, the altered integrity of blood-brain barrier becomes reestablished.

Our laboratory found in the last years, the presence of derangement in the CNS in a prehepatic portal hy-pertensive rat model. Increases in the uptake and release of norepinephrine in diencephalic and telencephalic dis-crete brain regions and significant increments in tyrosine hydroxylase activity in these nuclei were described in previous publications[3-5].

Finally, morphologic alterations in astrocytes (AS) and endothelial cells (EC) located in the hippocampal region (CA1 and CA4) were also found in this experimental model[6].

The morphological cell components of BBB are basically AS, EC and pericytes. Two of this, AS processes and EC, were found altered in this model and in acute acetaminophen intoxication fourteen days after portal vein ligation[7,16,17].

Beside this, forty days after portal vein stricture, portal pressure spontaneously turns to normality. The aim of the present experiment was to investigate if normalization of PP was accompanied by the reestablishment of BBB properties and relate these findings with plasma ammonia concentration.

Male Wistar rats, with an average weight of 240 g were utilized and animal welfare was in accordance with the guidelines of the Faculty of Pharmacy and Biochemistry and approved by the Ethical Committee of the Faculty accordingly with Helsinki’s Declaration. The animals were placed in individual cages, with free access to food (standard laboratory rat chow) and water, and 12 h light cycle: 8 a.m. - 8 P.M. Special care for perfect air renewal was taken.

Portal hypertension was obtained by calibrated stenosis of the portal vein (PH) according to Chojkier et al[1]. Rats were lightly anesthetized with ether and then a midline abdominal incision was made. The portal vein was located and isolated from the surrounding tissues. A ligature of 3.0 silk sutures was placed around the vein, and snugly tied to a 20-gauge blunt-end needle placed along side the portal vein. The needle was subsequently removed to yield a calibrated stenosis of the portal vein. Operations were performed at 2 PM to obey circadian rhythm. Fourteen days after portal vein ligation, animals exhibit an increase in portal pressure. After 20 d portal pressure begins to fall down to normal values approximately after 30 d.

Sham operated rats underwent the same experimental procedure except that the portal vein was isolated but not stenosed. Animals were placed in individual cages and allowed to recover from surgery. Portal pressure was measured the 14th d and the 40th d after surgery in the corresponding group, by puncture of the splenic pulp. Animals were sacrificed by decapitation between 2 and 4 PM to avoid circadian variations.

Portal pressure measurement Fourteen and forty days after the corresponding operation, the rats were anaesthetized with sodium pentobarbital (40 mg/kg), intraperitoneally (ip). Portal pressure was measured through a needle placed in the splenic pulp, and maintained in place by cyanoacrylate gel. The needle was cannulated to a polyethylene catheter (50) filled with a heparinized saline solution (25 U/mL) and connected to a Statham Gould P23ID pressure transducer (Statham, Hato Rey, Puerto Rico) coupled to a Grass 79D polygraph (Grass Instruments, Quincy, MA).

Brain water content Cortical brain zones were utilized for the determination of water content in order to quantify possible brain edema. Gravimetric method was employed according to Marmorou et al[9].

Trypan blue transcardial perfusion Rats were perfused with Trypan blue (TB, Sigma Chemical Co. St. Louis MO. USA.) solution and then fixed with paraformaldehyde. TB solution (0.5 %) was prepared by dissolving 1 g of TB in 200 mL of PBS, with gentle heat. The solution was allowed to cool at room temperature, added to the filtrate and placed on ice for immediate use. The temperature of TB solution was 10-12  °C at the time of perfusion. Rats were anaesthetized with ethyl urethane (1mg/kg) and perfused transcardially with 200 ml of TB solution; followed by 300 mL of ice-cooled paraformaldehyde (2% in PBS). The flow rate of perfusate was maintained at 25 mL/min. Brains were dissected and post-fixed overnight in 30 % sucrose for 2 d. Subsequently, the brains were placed in powdered dry ice and stored at -80 °C until processed for microscopic studies. Slices of brain tissue were obtained with cryostat in section of 300 microns according to Paxinos and Watson[10]. Hippocampal slices were evaluated under light microscope and expressed as positive (+) or negative (-) for TB staining. Medial eminence and choroids plexus staining were used as control of TB adequate perfusion. This method was adapted from Ikeda et al[11].

Evans blue test Evans blue (EB, Sigma Chemical Co. St. Louis MO. USA.) dye (25% in 0.9% NaCl solution) was intravenously injected at dose of 25 mg/kg in rats under ether anesthesia. One hour after the injection, animals were sacrificed by decapitation. Brains were weighed, clipped and individually placed within formamide p.a. (2mL/brain). These tubes were kept at 37°C for 48 h. The content of dye extracted from each brain was determined by spectrophotometer (Photometer 4010, Boehringer) at 620 nm and compared to standard graph created through the recording of optical densities from serial dilutions of EB in 0.9% NaCl solution[11,12].

Results were expressed as mean ± SE. For multiple com-parisons ANOVA, followed by Newman-Keuls or Student Newman Keuls tests were used. A P < 0.05 was considered significant. 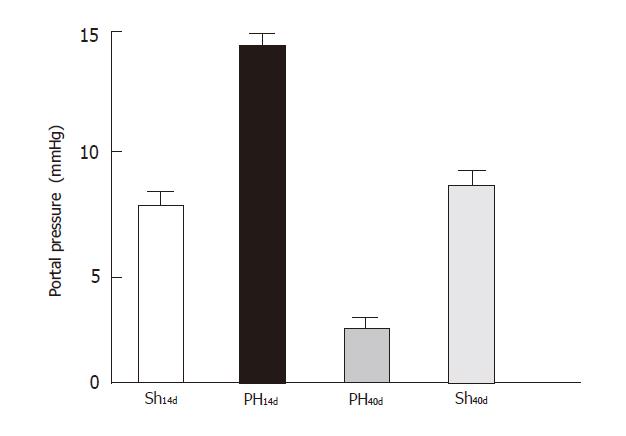 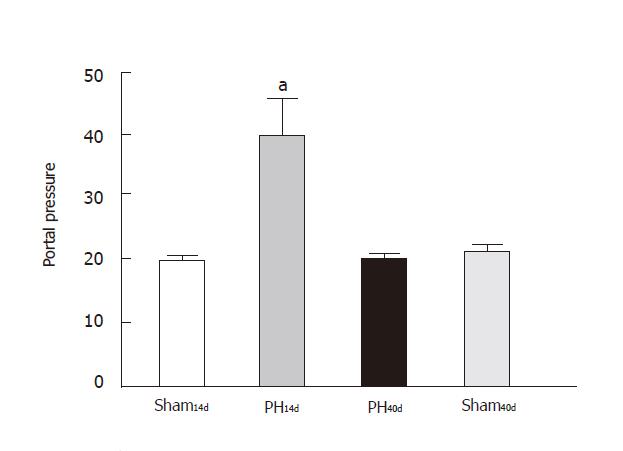 Figure 2 Protein content in cerebrospinal fluid. Hatched column corresponds to PH14d ham shows an increased protein filtration through the BBB. This increment is not present, in black column,corresponding to PH40d Results are expressed as mean ± SE.
Ammonia plasma levels (Figure 3) 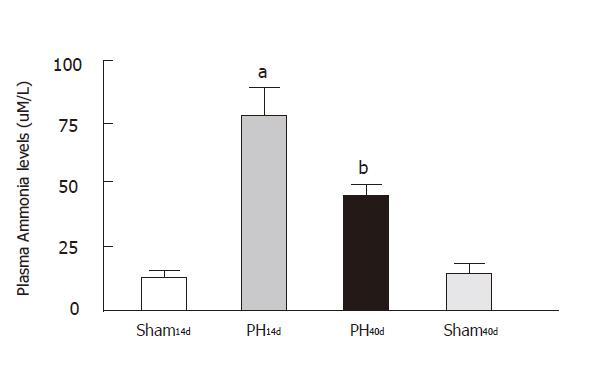 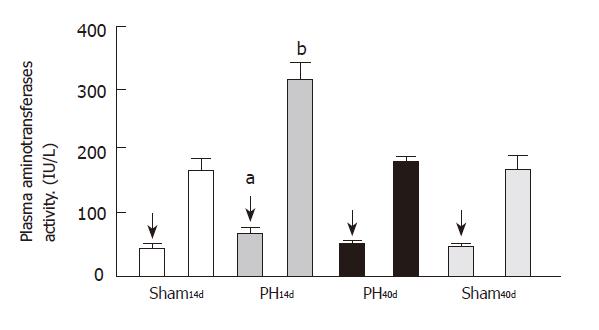 Figure 4 Plasma aminotransferases. The first column of each group corresponds to ALT activity (arrows) and the 2nd to AST activity. Both enzymes activities appear elevated in PH14d (hatched columns) when compared to Sham14d (bP <0.001; aP <0.05). 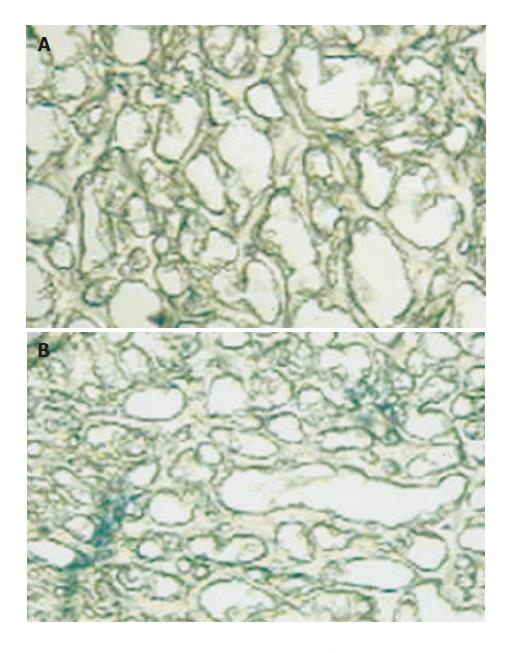 Figure 6 A: In the rest of the groups, including that were portal pressure normalized 40 days after portal vein stricture and Sham groups, the image is negative for Trypan blue dye (100 x); B: Light microscopy showed a marked Trypan blue dye diffusion in brain hippocampal of PH rats of 14 d (100 x). 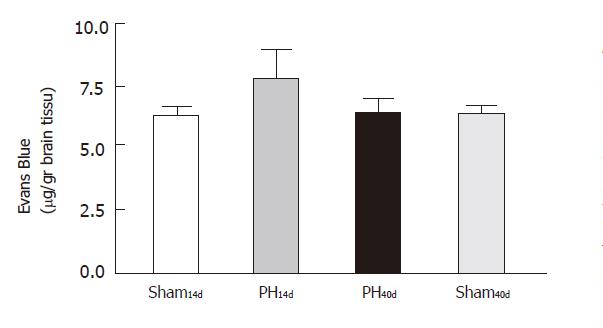 Figure 5 Evans blue test. The systemic injection of Evans blue showed a statistically significant increase of the dye presence in the hippocampal region in PH14d presence in the indicate p < 0.01 when compared with the other 3 groups.
DISCUSSION

The BBB is formed by complex tight junctions of the brain capillary endothelial cells in close relation with the astrocyte processes. These morphological and functional structures make possible a selective transport across BBB and a non-selective brain distribution of drugs(13). Three cellular components characterize BBB: Endothelial cells, astrocyte end feet and pericyte(14). Tight junctions present between cerebral endothelial cells form a diffusion barrier that restricts the influx of most blood-borne substances from entering the central nervous system (CNS). Dysfunction of BBB complicates a number of neurological diseases[15].

Alterations in astrocytes architecture as well as changes in its metabolism due to ammonia detoxification, osmotic balance and cell homeostasis are a well-known feature of hepatic or porto-systemic encephalopathy[16,17].

In previous publications, we described the alteration of BBB in this model of prehepatic portal hypertension, with or without acute acetaminophen intoxication[18,19]. In this paper, the addition of Evans blue technique confirms previous results and adds a quantitative measurement to morphologic findings.

Alterations of BBB permeability have been studied in different models of cirrhosis and porto-caval shunting, observing different kind of BBB changes like for some aminoacids but not others[20-22], Evans blue[23] , but not for 14C mannitol or 3H-glutamate[22].

Our results show an altered BBB permeability, qualitative and quantitative, in portal vein ligated rats 14 d after surgery (PH14d) and posterior normalization after 40 d of portal vein stricture (PH40d). This alteration is shown by significant differences observed in protein concentration in CSF and concentration of Evans blue dye in CNS and confirmed by microscopic observation of Trypan blue diffusion. It is interesting to stress out that in PH14d group, protein concentration in CSF is elevated despite a tendency to fall in plasma protein when compared to control (Sh14d). There were no differences in plasma or CSF protein content between Sh14d and PH40d or Sh40d, nor in the same groups when comparing Evans Blue concentration.

In this study, a decrease in portal pressure accompanies normalization of BBB permeability expressed as CSF protein content and diffusion of Evans blue and Trypan blue dyes. Despite these results, ammonia remains moderately elevated after 40 d, indicating the presence of some amount of portal systemic shunting and that some levels of increased ammonia may not interfere with BBB normal function. This presence of portal systemic shunting could also explain the fact that portal pressure is lower in PH40d, when compared to the sham operated group. In spleen-portographies done in the past, we observed in rats of more than 30 d of portal ligation, some cases of porto-portal collateral circulation shunted the silk ligature (personal observation, unpublished).

The fact that BBB altered permeability is resolved but plasma ammonia concentration is not completely normal remains unexplained. Further studies should be conducted to clarify the responsibility of vasoactive substances released in portal hypertension in BBB alterations in this rat model.

The elevated AST and ALT may indicate some kind of liver alteration present in this model with an otherwise almost normal liver function. Astrocyte changes and ammonia detoxification in the brain are probably some of the mechanisms implicated in BBB alteration and posterior normalization. Other factors have been implicated like cytokines and carbon monoxide[23-25].

We confirm the spontaneous tendency of this model to normalize portal pressure. No changes in cortical brain water content were found. Following the spontaneous decrease of portal pressure at 40 d, the BBB altered permeability reestablished its properties. Despite BBB permeability normalization, ammonia concentration remained moderately high, but significantly lower than the portal hypertension group 14 d after surgery. This could be a useful model to study BBB alterations and posterior normalization in portal hypertension with a low grade of encephalopathy.

We thank Dr. C. Taira and Dr. C. Ghanem for their kind advise.