We present a case of a 72-year-old man with a common bile duct cancer, who was initially believed to have multiple liver metastases based on computed tomography findings, and in whom magnetic resonance cholangiography (MRC) revealed a diagnosis of bile duct hamartomas. At exploration for pancreaticoduodenectomy, liver palpation revealed disseminated nodules at the surface of the liver. These nodules showed gray-white nodular lesions of about 0.5 cm in diameter scattered on the surface of both liver lobes, which were looked like multiple liver metastases from bile duct cancer. Frozen section of the liver biopsy disclosed multiple bile ducts with slightly dilated lumens embedded in the collagenous stroma characteristics of multiple bile duct hamartomas (BDHs). Only two reports have described the MRC features of bile duct hamartomas. Of all imaging procedures, MRC provides the most relevant features for the imaging diagnosis of bile duct hamartomas.

Multiple bile duct hamartomas (BDHs) are small benign neoplasms of the liver, pathologically containing cystic dilated bile ducts embedded in a fibrous stroma[1]. In almost all cases, these patients are believed to have multiple liver metastases following initial imaging[2], and diagnosis of BDHs is frequently not considered until after liver biopsy[3]. It is difficult to be certain that all of the lesions identified radiologically, such as ultrasonography (US), computed tomography (CT), are definitely BDHs, necessitating referral for open biopsy to exclude liver metastases. Although the magnetic resonance imaging (MRI) appearance has been reported in 14 cases previously, only two reports have been published for BDHs with illustration of magnetic resonance cholangiography (MRC) features[3,4]. In this report, MRC may be useful to allow accurate characterization of the liver lesions, thereby permitting the diagnosis of von Mayenburg complexes to be made with careful analysis of the MRI, and MRC images.

A 72-year-old man was admitted to our hospital in September 2003 with a history of epigastralgia. The physical examination was unremarkable. His serum levels of hepatobiliary enzymes were increased, however, that of total bilirubin (T Bil, 0.7 μmol/L) and direct bilirubin (D Bil, 0.3 μmol/L) were normal. Tumor markers, carbohydrate antigen19-9 (CA19-9) and carcinoembryonic antigen (CEA) were almost within normal range. Ultrasonography showed a dilatation of the common bile duct (CBD) and intrahepatic bile duct. Endoscopic retrograde cholangiography (ERC) showed the irregular stenosis of the lower CBD (1.5 cm in length) and upper part of CBD was dilated. Biopsied specimens from this tumor histologically revealed adenocarcinomas. On the basis of these findings, we diagnosed this tumor as a carcinoma of the CBD. Additionally, multiple, very small and hypodense nodules with ring-like enhancement in both hepatic lobes were found on early phase of enhanced CT (Figure 1). 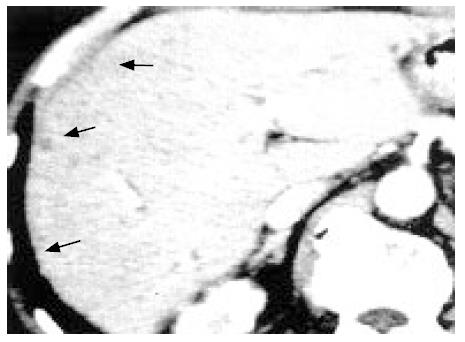 The lesions were too small to characterize accurately by either modality, but were consistent with disseminated liver metastases. On MRC images (TR 16 000 ms TE 107.8 ms), multiple irregularly delineated hyperintense nodules were seen, not communicating with the biliary tree (Figure 2). These findings suggested the bile duct hamartoma (BDH) (von Mayenburg complexes). 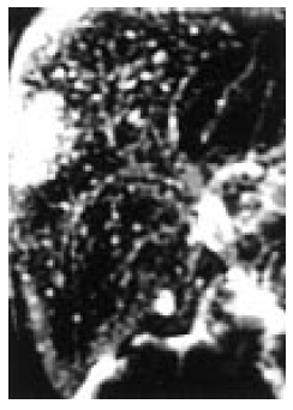 At exploration for pancreatoduodenectomy, liver palpation revealed disseminated nodules at the surface of the liver. These nodules showed gray-white nodular lesions (about 0.5 cm in diameter) scattered on the surface of the both liver lobes, which were looked like multiple liver metastases from the bile duct cancer (Figure 3). Frozen section of the liver biopsy disclosed multiple bile ducts with slightly dilated lumens embedded in the collagenous stroma characteristics of BDHs with no evidence of malignancy (Figure 4). 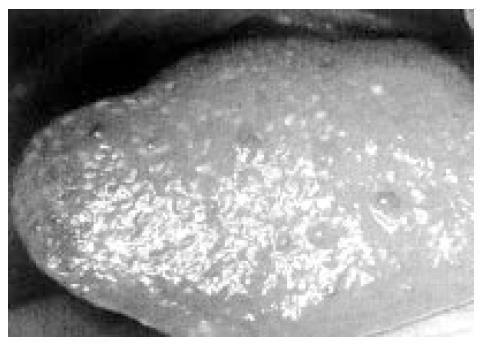 Figure 3 Intraoperative macroscopic view showing gray-white nodular lesions (about 0. 5 cm in diameter) scattered on the surface of the both liver lobes. 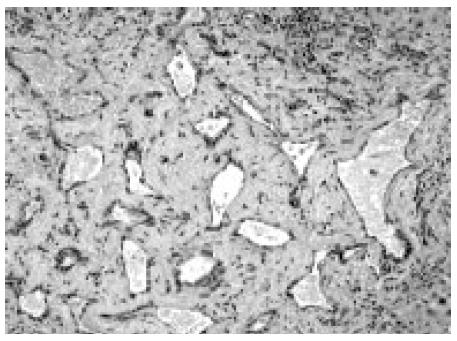 On gross pathology, Von Meyenburg complexes of the liver present as gray-white nodular lesions scattered throughout the liver parenchyma, usually measuring between 0.1 and 1.0 cm in diameter[3]. In this case, enhanced CT showed low density small nodules with ring-like enhancement, therefore multiple liver metastases were suspected. The major differential diagnoses, especially on frozen section, are intrahepatic cholangiocarcinoma and metastatic adenocarcinoma. The clinical importance of bile duct hamartomas is its ability to mimic metastatic disease of the liver. Chamlou et al[5] reported that, in the pancreatic cancer patient, the biliary duct hamartoma was erroneously confused intraoperatively with hepatic metastasis on frozen sections, and the pancreatoduodenectomy was therefore not performed at the first operation. Because of prevalence of biliary hamartomas, these entities should be considered as possibilities when liver lesions are noted intraoperatively.

MRI can aid in the differentiation of liver cysts and liver metastases by identifying the hyperintense signal from liver cysts on heavily T2-weighted sequences. To our best of knowledge, only two reports have described the MRC features of BDHs[3,4]. MRC can be extremely important in evaluating anomalies of bile ducts. Additionally, it allows differentiation between dilated biliary ducts, saccular dilatation of biliary duct system (Caroli's diseases), and periductal non-communicating cystic lesion, including polycystic disease, bile duct hamartomas and multiple abscess. In previous reports, MRC images showed multiple hyperintense cystic lesions of small diameter scattered in both liver lobes with normal appearance of the intrahepatic and extrahepatic bile ducts. No communication between the hamartomas and the intrahepatic bile ducts was observed. In this case, MRC findings are similar to the previous reports and compatible with BDHs. MRC offers the ability to characterize small liver lesions characteristics of BDH.