AIM: To evaluate the functions of a new bioartificial liver (BAL) system in vitro and in vitro.

MEHTODS: The BAL system was configurated by inoculating porcine hepatocyte spheroids into the cell circuit of a hollow fiber bioreactor. In the experiments of BAL in vitro, the levels of alanine aminotransferase (ALT), total bilirubin (TB), and albumin (ALB) in the circulating hepatocyte suspension and RPMI-1640 medium were determined during 6 h of circulation in the BAL device. In the experiments of BAL in vitro, acute liver failure (ALF) model in canine was induced by an end-side portocaval shunt combined with common bile duct ligation and transaction. Blood ALT, TB and ammonia levels of ALF in canines were determined before and after BAL treatment.

RESULTS: During 6 h of circulation in vitro, there was no significant change of ALT, whereas the TB and ALB levels gradually increased with time both in the hepatocyte suspension and in RPMI-1640 medium. In the BAL treatment group, blood ALT, TB and ammonia levels of ALF in canines decreased significantly.

CONCLUSION: The new BAL system has the ability to perform liver functions and can be used to treat ALF.

Acute hepatic failure (ALF) is a disease with a high mortality. Although significant improvements have been achieved in critical care therapy, the mortality rate of ALF patients is about 80%. In many patients liver failure is reversible and if short-term liver support is provided, the liver may regenerate. Survivors may recover full liver function and a normal life expectancy. For many years, liver transplantation has been the only curative treatment for this condition, subjecting many patients to replacement of a potentially self-regenerating organ, with the lifetime danger of immunosuppression and its attendant complications, such as malignancy. Additionally, because of the shortage of livers available for transplantation, many patients die before a transplant can be performed, or are too ill to undergo surgery at the time a liver becomes available. The survival of patients excluded from liver transplantation or those with potentially reversible ALF might be improved with temporary artificial liver support. Among a variety of liver support therapies, bioartificial liver (BAL) therapy is marked as the most promising solution. Some BAL devices are under trials in animals[1-4] and human beings[5-8]. The major problem is how to configure a BAL system. To attain enhanced efficacy of liver support, several BAL configurations have been proposed. The long-term maintenance of hepatocyte function is crucial for any BAL system. Some systems use hepatocytes attached to microcarrier beads or multicellular spheroid aggregates[9-11]. In regard to bioreactor design, various bioreactor configurations have been proposed that employ glass plates, hollow fiber membranes, encapsulation in biological matrices, and 3-dimensional carrier materials[12-15].

In this study, porcine hepatocytes were isolated by in situ recirculating collagenase perfusion method and cultured with spinner culture method to prepare hepatocyte spheroids. A new BAL system was configured by inoculating hepatocyte spheroids into cell circuit of a BIOLIV A3A hollow fiber bioreactor and the functions of the BAL system were evaluated in vitro as previously described[16,17]. At same time, the efficacy evaluation of the BAL system was conducted in a model of ALF canines induced by an end-side portocaval shunt combined with common bile duct ligation and transaction.

The BAL system was configured by inoculating the hepatocyte spheroids into the cell circuit of a hollow fiber bioreactor (BIOLIV A3A, Cell Biotech Limited, HK, China). The total cell circuit volume was 250 mL. Hepatocyte spheroids in serum-free RPMI-1640 medium containing 1.0×1010 primary porcine hepatocytes were infused into the outer space of the hollow fibers and the medium was circulated at 20 mL/min with continuous O2 input (2 L/min) (Figure 1). The bioreactor was kept at 37.5 °C in an incubator[16]. 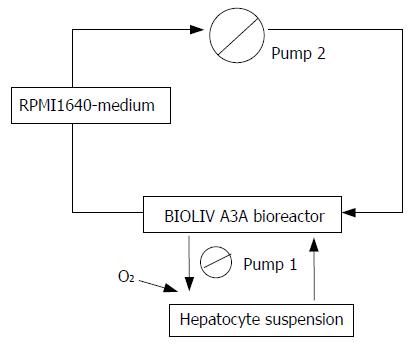 Determination of functions of BAL system in vitro

Independent experiments were performed 5 times with the BAL device. The RMPI-1640 medium flowed through the lumen of the hollow fibers at a rate of 30 mL/min. Samples of the hepatocyte suspension and RMPI-1640 medium were obtained at 2 h intervals during 6 h of circulation. Changes of alanine aminotransferase (ALT), total bilirubin (TB), and albumin (ALB) levels in the circulating hepatocytes and medium were determined with an automatic biochemical analyzer (Hitachi 7600, Japan).

Determination of functions of BAL system in vivo

Independent experiments were performed 8 times with the BAL device. Hemoperfusion was performed from femoral artery to femoral vein through the bioreactor at a rate of 30 mL/min. The ALF model canines were divided into two groups: the BAL treatment group (n = 8) consisiting of canine ALF models was perfused using the above serum-free medium inoculated with porcine hepatocyte spheroids for 6 h, and the control group (n = 8) consisting of the canine ALF model was perfused using the above serum-free medium without porcine hepatocytes for 6 h.

Results were expressed as mean±SD. Statistical differences were evaluated by analysis of variance (ANOVA). P < 0.05 was considered statistically significant.

Changes of biochemical parameters in ALF canines after BAL circulation

The ALF canines had no apparent signs of toxicity during and after BAL treatment.

Treatment of ALF is a formidable clinical challenge. Currently, liver transplantation is the most effective therapy. Although advances have been achieved in transplantation techniques, donor organ shortage remains a serious problem. The mortality of ALF is still high. However, many ALF patients can recover through liver regeneration after short-term liver support, which has prompted the design of an extracorporeal liver support device to “bridge” patients over until they either recover or receive a liver transplant. Among these devices, the BAL system is most promising. Various types of hepatocytes are inserted and different device designs have been proposed [23-25]. The BAL system differs from non-biologic artificial liver devices in the synthesis of essential metabolites and the selective removal of toxic substances, which are carried out by the cultured hepatocytes. An ideal BAL system can provide all the hepatic functions.

In this study, we configurated a new BAL system by inoculating porcine hepatocyte spheroids into the cell circuit of a hollow fiber bioreactor and evaluated its functions in vitro and in vivo.

Nagaki et al[26] demonstrated that primary hepatocytes are superior to transformed hepatocytes as a source of biotransformation functions in the BAL system. The BAL system we developed uses viable porcine hepatocytes in the bioreactor to exert liver functions.

Since 10-30% of hepatocytes in the normal human liver are needed to maintain normal hepatic functions[27], Matsmura et al[28] proposed that a BAL requires 150-450 g of liver. Our BAL device contains 1.0×1010 hepatocytes to meet the need of patients with ALF. The liver of an adult canine weighs about 335 kg and contains 3.35×109 hepatocytes. Therefore, the BAL device could be used in this experiment.

It has been reported that cell-cell interaction has an important role in maintaining the viability and the functions of hepatocytes[29]. In the present study, hepatocytes were incubated in serum-free medium and poly-HEMA-coated bottles by a continuous rotational method in order to restrict their attachment to the wall and promote the formation of hepatocyte spheroids. This method could not only facilitate cell-cell interaction and maintain cell functions, but it also meet the requirement of high-density culture in BA, thus reducing the possibility of immunoreaction by using serum-free medium with hormone and various growth factors[19].

The ideal bioreactor should provide a good environment for growth and metabolism of hepatocytes as well as the efficient exchange of substances. At present, the most commonly used device is a hollow fiber bioreactor with many small hollow fibers made from semipermeable membranes. The device has two independent compartments that are separated by hollow fiber semipermeable membranes. The intratubular space is used to perfuse blood, while the extratubular space is used to culture hepatocytes. The blood or plasma of patients flows into the bioreactor, exchanging substances with hepatocytes through the semipermeable membranes. The membranes also provide immuno-isolation. In view of the molecular weight of albumin (68 ku), a hollow fiber membrane with 200 nm pore size and a MWCO of 70 ku was chosen for this study. The membrane allows passage of some relatively small molecules such as albumin, but restricts the passage of lymph cells and high molecular weight proteins. Blood-borne toxins and metabolic precursors are free to diffuse across the membrane to hepatocytes where they are metabolized. Metabolic products and detoxified toxins are free to diffuse back across the membrane to the flowing blood. Hepatocytes in the bioreactor also synthesize molecules (proteins, coagulation factors, enzymes, carrier molecules) that pass across the hollow fiber cartridge into blood. Continuous O2 input could ensure hepatocytes to gain sufficient oxygen. Therefore, our BAL device has such a novelty as it uses hepatocyte spheroids and serum-free medium compared to previously reported BAL[13-16].

In the experiments of BAL in vivo, blood ALT, TBi and ammonia levels significantly decreased after 6 h of circulation in the BAL group. There were no significant differences in blood ALT, TB and ammonia between pre-circulation and post-circulation in the control group, though these indices were slightly decreased after circulation. These results suggest that our BAL system has the potential not only to protect against hepatocyte destruction but also to dilute excess ALT in the systemic serum, which is consistent with the previous report[30]. The survival rate was higher in BAL group than in control group, but there was no statistical significance, which may be related to the quantity of the samples. The viability of hepatocytes was about 90% at the end of BAL treatment, indicating that our BAL device has its advantages.

In conclusion, the new BAL system configurated in this research has a certain liver support effect and appears to have potential advantages for its clinical use in patients with ALF.