AIM: To explore the prevalence of gallstone disease (GSD) in Taiwan and condition-associated factors related to it.

METHODS: We studied a total of 2386 healthy adults (1235 males and 1151 females) voluntarily admitted to Cheng Hsin General Hospital for a paid physical check-up between January 2002 and December 2002. Blood samples and ultrasound sonography results were collected.

Gallstone disease (GSD) is one of the most common diseases in developed countries. Recent studies indicate varying prevalence of GSD with several predisposing factors in different study populations[1-9]. From a medical economic perspective, the direct and indirect costs of treating GSD patients were estimated at $16 billion and account for more than 800 000 hospitalizations yearly in the United States[9,10]. In Taiwan, the prevalence of GSD in the general population was 4.3% in 1989[8] while another voluntary screening revealed that the prevalence of GSD was 10.7% among healthy subjects in 1995[2]. For this reason, due to westernization of the diet and the environment, GSD is not rare in the Chinese population and has become one of the major health problems in Taiwan[7]. Without an appropriate and effective screening program for symptomatic GSD, the medical treatment of GSD and related complications contributes substantially to health care costs.

From the viewpoint of preventive medicine, it is not only important to be cognizant of the background prevalence of GSD regionally, but also to explore the complete spectrum of demographic and biological markers which may be related to development of GSD. Although most epidemiologic studies of GSD, demographic factors and biochemical markers have used case-control designs and cross-sectional data[1-9], to the best of our knowledge, some uncertainty still exists regarding the prevalence of the disease and the identity of the associated risk factors for the development of GSD. The present study was designed to explore potential associated risk factors and to improve understanding of the overall pathogenesis of GSD. The purpose of this study was to explore the context of associated risk factors for GSD prevalence amongst the general population aged 20 years or more, as determined by the application of a healthy volunteer subjects screening program at Cheng Hsin General Hospital, a fully certified regional hospital and teaching hospital in Taipei, Taiwan.

In the present study, GSD was diagnosed by a panel of specialists using real-time ultrasound sonography (TOSHIBA nemio SSA-550A, Japan) to examine the abdominal region after fasting for at least 8 h based on the presence of “movable hyper-echoic foci with acoustic shadow. Cases of GSD were classified as follows: single gallbladder stone, multiple gallbladder stones, and cholecystectomy, excluding gallbladder polyps. Cases were identified as any type of GSD study population.

In order to set up a consistent diagnosis of GSD between specialists, the Kappa statistic was used to assess the agreement of inter-observer reliability among study specialists. A pilot study was performed using 100 randomly selected healthy subjects other than the study participants. For inter-observer reliability, the Kappa value for diagnosis of GSD between specialists was 0.79 (95%CI: 0.61-0.95).

Statistical analysis was performed using SAS for Windows, (SAS version 9.0; SAS Institute Inc., Cary, NC, USA). A P-value of < 0.05 was considered statistically significant between two test populations. For univariate analysis, the two-sample, independent t-test method was adopted to assess differences in the mean value of continuous variables between subjects with and without GSD. Crude and adjusted odds ratios (adjustment for gender and age) were estimated and 95% confidence intervals were used. Multiple logistic regression was also performed in order to investigate the independence of risk factors associated with the prevalence of GSD. 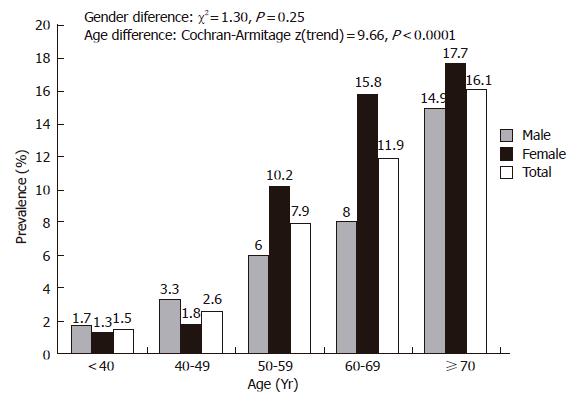 Figure 1 Gender- and age-specific prevalence of all types of gallstone disease among 2386 Chinese subjects.

DISCUSSION
Prevalence of gallstone disease in the general population

One of the important benefits of early screening for GSD is that ultrasonography can lead to the discovery of an increasing proportion of asymptomatic cases for which one can use therapeutic nonsurgical approaches, such as litholitic bile acids, local solvents, and lithotripsy[13]. However, it appears that only a few published studies have attempted to determine the prevalence and possible etiology of GSD prevalence for the general population of Taiwan[2,8,14], which also face a GSD burden. In the present study, GSD appeared to be fairly common for the test population, affecting an estimated 5.3% of the general population in Taiwan. The prevalence of GSD amongst different test populations appears to vary, differing among different studies conducted in different countries[1,3-6]. In addition to different methods of GSD assessment, this disparity might be due to differences between different population stocks. The prevalence of GSD for our study population (5.3%) was lower than the corresponding figure presented in a previous hospital-based study conducted in the Veterans General Hospital (VGH), Taipei, Taiwan, which was reported to be 10.7%[2]. The apparent lower prevalence rate in our study may have been due to younger age of the participants. Another possible reason for such differences between the results of the VGH study and our results may simply have been related to the fact that although the kappa value for agreement of interobserver reliability seemed good [14], non-differential misclassification-bias identification could still be occurring and could lead to underestimation of GSD prevalence.

The implications of associated risk factors for gallstone disease

Our results reveal that older age represents a significant risk factor for GSD. Such a finding is consistent with results of other hospital-based and community-based studies conducted elsewhere[2-5,7,8]. GSD is very seldom found in children, and in that age group is mainly associated with haemolytic causes[15]. The long-term exposure to many other risk factors among elder persons may also account for the increased probability of developing GSD. Cholelithiasis is also an acquired disease contributed to by chronic environmental factors plus an aging effect[7]. In addition, it has been suggested that among the elderly, larger amounts of cholesterol are secreted by the liver, and the catabolism of cholesterol to bile acid is decreased[16,17].

Most previous epidemiologic studies have shown that females have a higher prevalence of GSD than males in the Western world. However, the male to female ratio seems to have changed from early reports, which showed figures of 1:4-6 to more recent studies where the ratio is 1:2 or less[3,4,18]. Pregnancy and sex hormones could be involved by altering biliary secretion or gallbladder motility, or both may play an important role in sex-related differences in the prevalence of GSD[13]. Another possible reason might be that estrogen replacement therapy or oral contraceptives are used[19]. Our findings showed that, except for multiple stones, females do not have a significantly higher prevalence of all types of GSD than males. This result is similar to that from other hospital-based or population-based studies conducted in Taiwan[2,7,8].

After adjustment for confounding factors, the present study also suggests that obesity is highly correlated with GSD prevalence. Supersaturated bile is the linkage between obesity and cholesterol GSD. Obesity can raise the saturation of bile by increasing biliary secretion of cholesterol - the latter probably depending on a higher synthesis of cholesterol in obese subjects[7,13,20]. While cholesterol GSD is common in Western countries, pigment GSD is still the principal component in Taiwan[2]. Our results also implied that obesity may be an independent associated risk factor leading to prevalent pigment GSD in the Chinese population.

An increasing prevalence of cholecystolithiasis has been associated with the etiology and severity of chronic liver disease and cirrhosis[23]. Possible explanatory factors include overproduction and over-secretion of bilirubin due to increased extracorpuscular hemolysis, a reduction in the production and transportation of biliary salts and cholesterol secretion, stasis and changes in bile acidification, or even mucous hypersecretion and subtle alterations in gallbladder mucosal function[24,25]. However, although early liver dysfunction such as abnormal ALT, HBV, and HCV infection are endemic in Taiwan[12,26,27], the present study did not reveal liver function associated factors to be related to GSD prevalence. This finding is consistent with other hospital-based studies for the general population in Taiwan[2]. Further epidemiological and etiologic investigations are needed to clarify the pathophysiological mechanisms between early liver damage and pigment GSD among general Chinese populations.

A major limitation of the present study is the potential self-selection bias due to the hospital-based study design, that is, of it not being exactly representative of the whole general population. Second, it is well established that a large proportion of GSD patients remain asymptomatic and they are therefore often ignored for many years. Thus the present study may be representative of the clinical and not of the true prevalence. Thirdly, we do not detail to distinguish between cholesterol stones and pigment stones in this study, some measurement errors and different pathogenicity could occur. Fourthly, we did not consider how many individuals had progressive liver disease and explore the relationship between GSD and liver disease. Finally, our measurements were done only at a single time point and could not be able to be reflect long-term exposure to various demographic or biochemical aspects or factors, factors which might be important influencers of GSD. The solution to such a quandary is to conduct a number of prospective longitudinal analogous studies, the results of which would be expected to complement the cross-sectional findings of this study.

In conclusion, older age, obesity (BMI≥27 kg/m2), and type 2 diabetes (FPG≥126 mg/dL) are associated with GSD prevalence. Further studies are needed not only to elucidate the temporal sequence of events that typically lead to GSD, but also to further explore the pathogenesis of GSD in the general Chinese population.