METHODS: Cloning was accomplished after PCR amplification from strains NCTC64609 and C58-1 of the protective antigen genes of α-toxin and β-toxin. The fragment of the gene was cloned using plasmid pZCPAB. This fragment coded for the gene with the stable expression of α-β fusion gene binding. In order to verify the exact location of the α-β fusion gene, domain plasmids were constructed. The two genes were fused into expression vector pBV221. The expressed α-β fusion protein was identified by ELISA, SDS-PAGE, Western blotting and neutralization assay.

RESULTS: The protective α-toxin gene (cpa906) and the β-toxin gene (cpb930) were obtained. The recombinant plasmid pZCPAB carrying α-β fusion gene was constructed and transformed into BL21(DE3). The recombinant strain BL21(DE3)(pZCPAB) was obtained. After the recombinant strain BL21(DE3)(pZCPAB) was induced by 42°C，its expressed product was about 22.14% of total cellular protein at SDS-PAGE and thin-layer gel scanning analysis. Neutralization assay indicated that the antibody induced by immunization with α-β fusion protein could neutralize the toxicity of α-toxin and β-toxin.

In this study, α-toxin and β-toxin protective antigen genes were amplified by PCR from Clostridium perfringens type A strain NCTC64609 and type C strain C58-1 respectively. The recombinant plasmid pZCPAB carrying α-β fusion gene was constructed by transforming it into BL21(DE3). The fusion protein that could produce α-β was obtained. The expressed α-β fusion protein could resist the attack of α-toxin or β-toxin.

Clostridium perfringens strains were incubated in TYG medium at 37 °C overnight. Bacterium cells were harvested by centrifugation, dissolved in TE buffer containing lysozyme(2 g/L) and incubated at 37°C for 1 h. Then SDS(final concentration was 1%), EDTA(final concentration was 50 mmol/L) and proteinase K(final concentration was 150 mg/L) were added. The reaction mixture was incubated at 58 °C for 4 h and extracted three times with equal volume of saturated phenol. The aqueous phase was transferred to an Eppendorf tube. Then 0.2 volume of ammonium acetate(10 mol/L) and 2 volumes of ice-cold absolute alcohol were added, mixed well and deposited for 10 min at room temperature. Chromosome DNA deposition like clew was picked with a glass stick to another Eppendorf tube. Appropriate TE was added to dissolve DNA and stored at 4 °C.

Chromosome DNA of Clostridium perfringens was amplified by PCR from genomic DNA using forward primers designed from the available sequence.

One set of primers of α-toxin protective antigen gene (cpa906) was synthesized. The EcoRIand BamHIsites were inserted to the 5’ and 3’ ends of α-toxin genes via PCR. The sequence of α-toxin primers is as follows:

Another set of primers of β-toxin protective antigen gene was synthesed. The BamH I and Pst I sites were inserted to the 5’ and 3’ ends of β-toxin genes via PCR. The sequence of β-toxin primers is as follows:

The following components were added into a 500 μL microcentrifuge tube. Each PCR contained 0.1 μmol/L primer1, 0.1 μmol/L primer2, 0.25 mmol/L dNTP, 1.5 mmol/L MgCl2, 10 μL 10×PCR buffer and appropriate template DNA. Sterile distilled water was added into a 100 μL reaction system. After the tubes were heated at 95°C for 5 min, 5 u Taq DNA polymerase was added into each tube. Thirty cycles of PCR were performed (denaturation at 94 °C for 1 min, annealing at 55 °C for 1 min, and extension at 72 °C for 1 min) . The amplified α- and β-toxin genes were purified separately by agarose gel electrophoresis to remove primers and extraneous amplification products.

The α-toxin and β-toxin protective antigen genes were separated and purified by agarose gel electrophoresis alongside DNA marker DL2000 and sequentially ligated to the pMD18-T cloning vector. Sequencing was performed with ABI 377 sequencer from Takara Company.

The recombinant was transformed into E. coli BL21(DE3) and selected by agar plate containing ampicillin and confirmed by restriction enzyme mapping. E. coli BL21(DE3) cells transformed with the plasmids described above were grown in LB medium with 50 mg/mL ampicillin (1/50) at 30°C to OD600 = 0.4~0.6. The growth was conditioned at 42°C for 5 h in order to express α-β fusion protein.

The cultured cells were collected by centrifugation at 5000 r/min for 10 min at 4°C. The optimum time of maximum expression of proteins was analyzed through SDS-PAGE. The expressed protein was tested through Western blot with specific antiserum. SDS-PAGE and Western blotting were performed as previously described[6,7]. The antigen-binding activity of the α-β fusion protein was determined by ELISA as previously described[8]. For determination of protein expression, the absorption value at 560 nm was measured by thin-layer chromatogram scanner type CS-9000.

The 8-wk old Kunming mice were divided into 8 groups randomly, 10 mice in each group. In treatment groups, each mouse was inoculated with inactive recombinant strains that could express α-β fusion protein. In control groups, each mouse was inoculated with strains that could not express α-β fusion protein. After 4 wk, each mouse of 4 groups was treated with one minimum lethal dose (MLD) of α-toxin or β-toxin. Another 4 groups were treated with 2 MLD of α-toxin or β-toxin. The survived mice/total mice were counted in a week. The segments of liver, lung, heart, spleen and intestines of mice in treatment group and control group were tested by LM assay.

The α-toxin gene from Clostridium perfringens type A strain NCTC64609 was isolated from genomic DNA-extracted template by PCR amplification. The reaction yielded a single product. Electrophoresis of PCR products confirmed the length of PCR fragment, which was approximately 900 bp (Figure 1A). The α-toxin gene was purified with DNA fragment recover kit and evaluated by agarose gel electrophoresis. The α-toxin gene fragment was ligated to the cloning vector pMD18-T with T4 DNA ligase. The cloning vector containing the α-toxin gene was introduced into competent E. coli DH5αcells by CaCl2 transformation. Transformed E. coli were grown at 37°C in medium containing X-gal/IPTG and ampicillin. The positive plasmids were identified via sequential digestion with EcoR I and BamH I and α-toxin protective antigen gene about 900 bp was obtained (Figure 1B). Sequence of inserted DNA was analyzed with automatic sequence analyzer and about 906 bp in size and encoded 302 amino acid residues (Figure 2). The recombinant plasmid was named pMD 906. 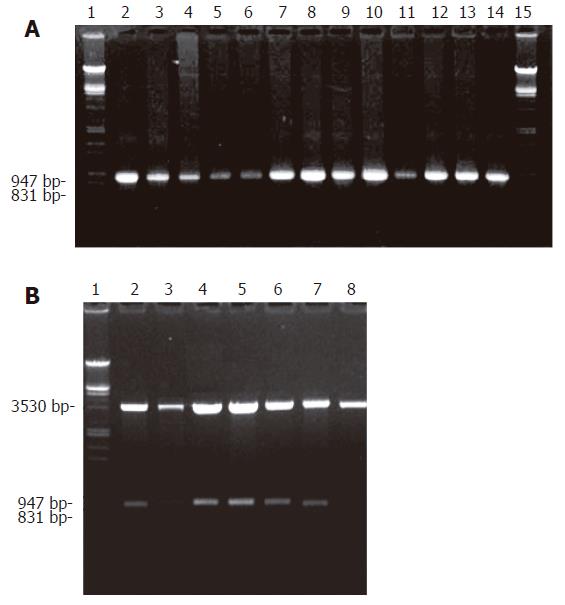 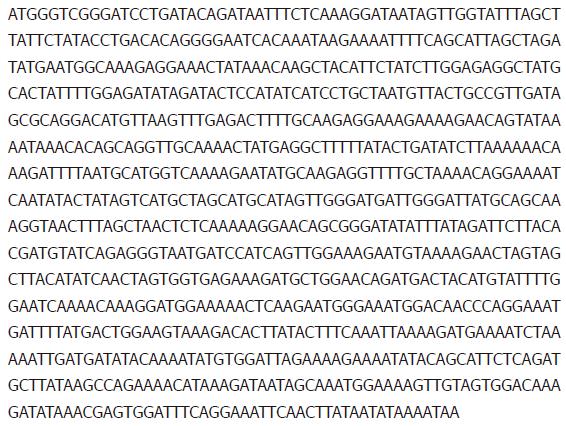 The β-toxin protective antigen genes were amplified from Clostridium perfringens type C and strain C58-1 by PCR. The PCR products were approximately 930 bp in length (Figure 3A). The β-toxin gene was purified and ligated to the cloning vector pMD18-T as α-toxin gene. The positive plasmids were identified via sequential digestion with Pst I and BamH I and about 930 bp β-toxin genes were obtained (Figure 3B). Sequence of inserted DNA was analyzed with automatic sequence analyzer and bout 930 bp in length and encoded 310 amino acid residues (Figure 4). The recombinant plasmid was named pMD 930. 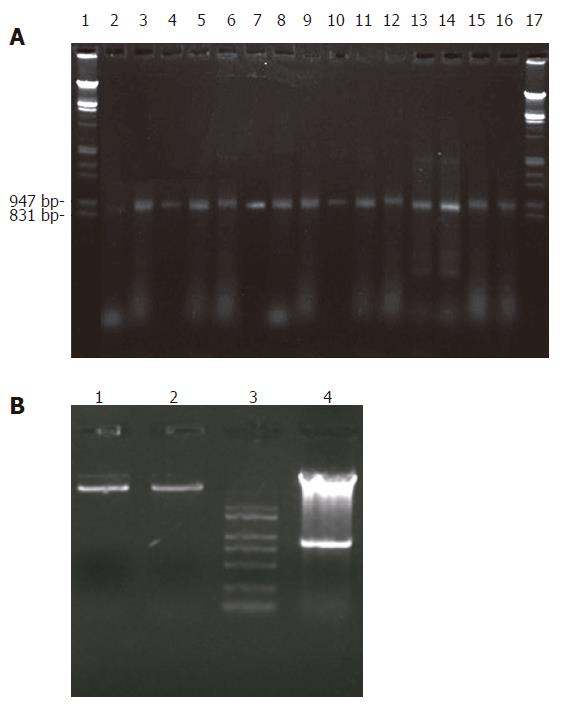 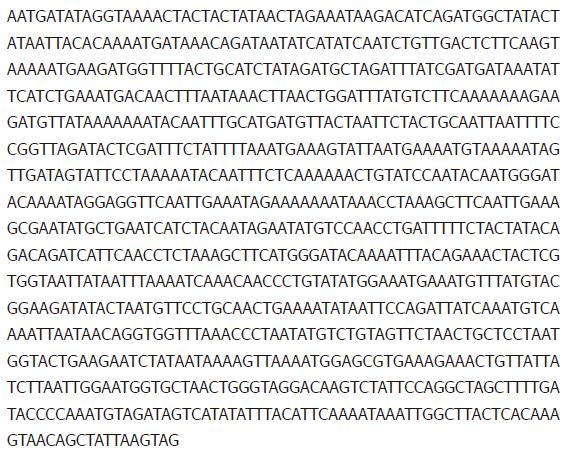 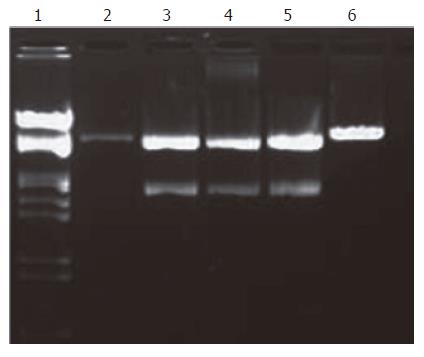 The recombinant plasmid pZCPAB carrying α-β fusion gene was transformed into E coli BL21(DE3) and the recombinant strain BL21(DE3)(pZCPAB) was obtained. SDS-PAGE and Western blotting of the bacterial protein showed that a specific protein band with a molecular weight of 66 kD emerged in the bacterial protein of E coli BL21(DE3)(pZCPAB). SDS-PAGE gel-scanning showed that the expressed α-β fusion protein accounted for 22.14% of the total bacterial protein (Figure 6). ELISA results indicated that the expressed fusion protein could be recognized by anti-α toxin antibody and anti-β toxin antibody respectively (Table 1). 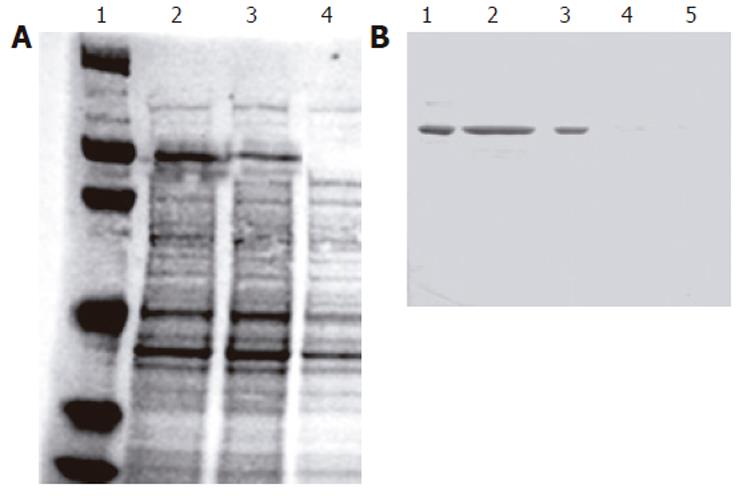 The expressed α-β fusion protein yielded in bacteria could provide protection of mice against the challenge of lethal doses of α-toxin or β-toxin of Clostridium perfringens (Table 2).

The segments of liver, lung, heart, spleen and intestine were sampled from the control group in which mice died of toxicosis and the treatment group in which survived mice were immunized with α-β fusion protein. Then they were observed by LM assay.

In treatment group, the structure of liver was seen clearly except that a few central veins of hepatic lobules were full of blood. The liver cytoarchitectures were intact (Figure 7A). In control group, the structure of hepatocytes was grain-like metamorphic. The nuclei of hepatocytes were concentrated and collapsed. Swollen hepatic sinusoids, veins of hepatic lobules and central veins were full of red cells or red thrombi, swollen Kupffer cells in the margin of hepatic sinusoids (Figure 7B).

There was no abnormal structure of spleen in treatment group (Figure 7G). The splenic cord was extruded and could not be seen clearly (Figure 7H).

The structure of duodenum and jejunum in treatment group was intact (Figure 7I). The capillary vessels of lamina propria of tunica mucosa had little bleeding. The epithelia of tunica mucosa were metamorphic and necrotic, one or many of intestinal villi fell into the enterocele (Figure 7J).

Clostridium perfringens is ubiquitous in the environment and has been found in soil, decaying organic matter and a member of the gut flora in humans and animals. Different strains of C perfringens can be classed into one of the five biotypes (A-E) according to the spectrum of toxins produced[9]. Clostridium perfringens is a Gram-positive anaerobic spore-forming bacterium which is widely found in the environment and also in the intestinal tract of humans and animals. Due to the production of several exotoxins, C perfringens is of great importance as a pathogen in humans, domestic animals and wildlife[10]. The production of four major toxins alpha (α), beta (β), epsilon (ε) and iota (ι) allows the discrimination into five types from A to E. In veterinary medicine, each of these types has been linked to specific diseases[11]. Clostridium perfringens enterotoxin (CPE) serves as an additional virulence factor which is believed to cause enteritis in pigs, cats and dogs[12]. The Gram-positive pathogen Clostridium perfringens is a major cause of human and veterinary enteric disease largely because this bacterium can produce several toxins when present inside the gastrointestinal tract[13].

Biotype A strains of Clostridium perfringens are of particular importance as the aetiological agents of gas gangrene in humans. Gangrenous disease is of increasing significance in elderly and diabetic population, especially in those who have undergone lower limb surgery, where impaired blood supply to tissues can lead to anoxic conditions suitable for proliferation of bacteria[14]. The disease can also arise in patients who have undergone surgery of the gastrointestinal tract when contamination of damaged tissues with gut contents can result in the establishment of disease[15]. Clostridium perfringensβ-toxin is known to be the primary pathogenic factor of necrotic enteritis in type C strains that produce β-toxin. Necrotizing enteritis is believed to be due to the production of β-toxin by Clostridium perfringens type C. Clostridium perfringensβ-toxin can also cause dermonecrosis and oedema in the dorsal skin of animals[16-18].