Liposarcoma is the most common soft tissue sarcoma in adult life while esophageal liposarcoma is an extremely rare tumor. In the world literature, only 14 cases of esophageal liposarcomas have been described. We report a 72-year old male patient who was urgently admitted to our hospital for acute epigastric pain with a burning retrosternal sensation, persistent nausea, vomiting and dysphagia. Barium swallow, upper gastrointestinal (GI) endoscopy, esophageal manometry and CT scan, failed to accurately diagnose the lesion. After surgical resection of an esophageal polypoid tumor, the histological examination revealed a well-differentiated grade I liposarcoma. Diagnostic and therapeutic tools were discussed and the results of literature were reviewed.

Liposarcoma is the most common soft tissue sarcoma in adult life and usually occurs in the retroperitoneum and deep soft tissues of the trunk and lower extremities[1-3] representing around 20% of mesenchymal neoplasms. It is very rare in the gastrointestinal (GI) tract, exceedingly in the esophagus. Esophageal liposarcomas grow as polypoid masses within the esophageal lumen, usually causing no symptoms until they reach a substantial size when impaired esophageal transit develops. The first case of a primary esophageal liposarcoma was reported by Mansour  et al [2] in 1983. The review of the literature revealed another 13 cases that have been reported since. We described a male patient who, to our belief, represents the 15th case reported in the literature, as he was found to have a well-differentiated esophageal liposarcoma arising from the wall of the lower thoracic esophagus exceeding down to the gastroesophageal (GE) junction.

A 72-year-old obese male (BMR > 30) was urgently admitted to our hospital because of an acute epigastric pain with a burning retrosternal sensation, persistent nausea, vomiting and complete dysphagia. He suffered from intermittent dysphagia in the last few years which was increasingly worsened in the last 2 mo. The day before his admission to our hospital he had an esophagogram and an esophageal manometry which showed a slightly dilated lower thoracic esophagus without any stricture and an achalasia like motor dysfunction. His past medical history revealed 5 mild episodes of a bleeding duodenal ulcer (from May 1962 to February 1995) which were treated with blood transfusions, antacids and PPIs. He was also under treatment with captopril and furosemide for arterial hypertension in the last ten years.

On initial urgent upper GI endoscopy, a smooth and unlcerated hemorrhagic tumor like protrusion in the lower thoracic esophageal mucosa down to the level of the GE junction was found (Figure 1). 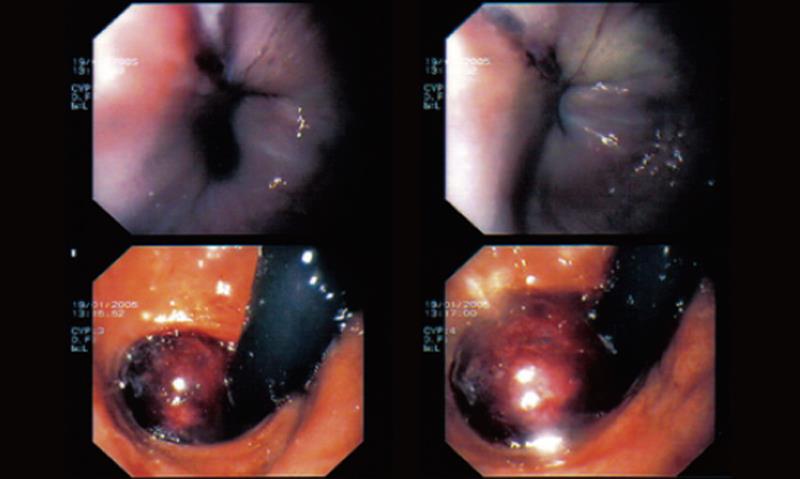 CT scan of the chest and upper abdomen demonstrated a well-circumfused mass at the lower thoracic esophagus with lipoma like density (-30.84 Hounsfield Units). No other lesions or enlarged lymph nodes at the lower mediastinum were found (Figure 2). 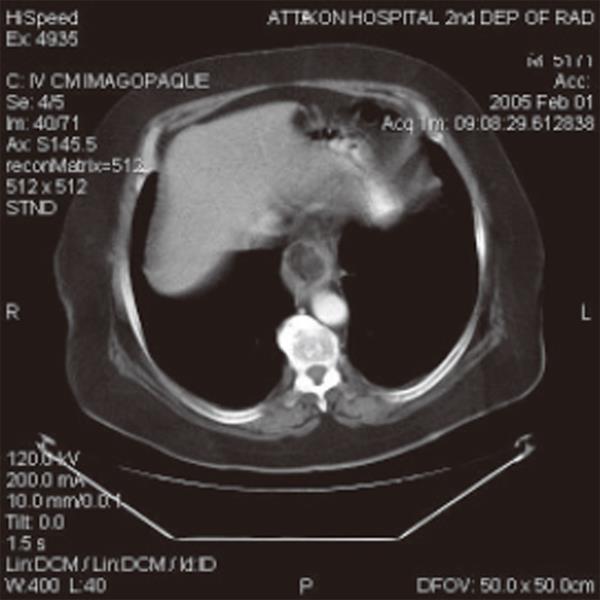 Figure 2 Intraluminal mass with a lipoma-like density in the lower esophagus.

The patient was put on parenteral nutrition and nil by mouth and on the 7th post admission day a second upper GI endoscopy clearly demonstrated an esophageal submucosal polypoid mass originating from the wall of the lower esophagus 4-5 cm above the GE junction. The tumor was covered by normal esophageal mucosa with central ulceration (Figure 3) and it seemed that it could be easily and intermittently intussuscepted through the GE junction into the stomach. A small sliding diaphragmatic hernia was also found. The stomach and the duodenum appeared to be normal. Multiple biopsies were taken especially from the ulcerated part of the tumor which failed to reveal any malignancy. 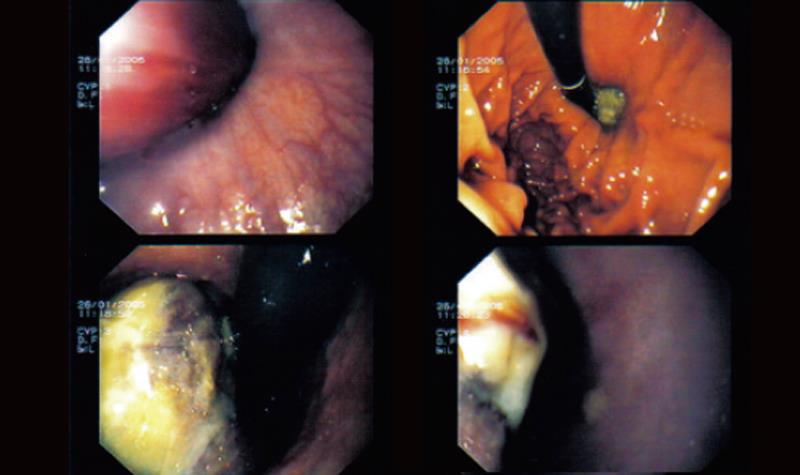 Figure 3 The lesion is covered by yellowish exudates at the second upper GI endoscopy.

The patient was scheduled for an operation. Through a left posterior-lateral thoracotomy, a dilated lower thoracic esophagus with edematous muscle wall layers was found. The sliding diaphragmatic hernia was also noted. After a longitudinal incision just above the GE junction, the esophageal lumen was entered which was almost completely obstructed by a big polypoid submucosal mass. A central necrosis of the overlaying esophageal mucosa revealed a lipoma like tumor which seemed to originate from the muscle layer of the esophageal wall, 5cm above the GE junction. We performed a local resection including a part of the esophageal muscle wall (Figures 4A and 4B). The esophageal incision was closed in 2 layers with interrupted absorbable sutures. 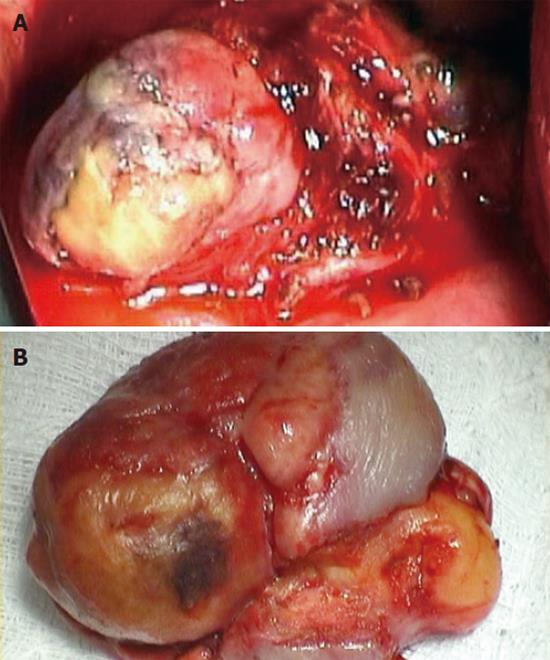 The postoperative period was uneventful, and the patient was discharged on the 8th postoperative day on a liquid - soft diet, with complete resolution of his preoperative symptoms.

Macroscopically the tumor was measured 5 cm × 3.5 cm x 2cm. Its surface was covered by normal esophageal mucosa measuring 3.5 cm × 1.5 cm with a central ulceration 1cm in diameter. The cut end of the mass revealed the adipocytic nature of the neoplasm and its color ranged from ivory to deep yellow with light brown areas. Histologically the neoplasm consisted predominantly of mature looking fat tissue which showed severe size and shape variation of adipocytic element with the presence of numerous multi vacuolated lipoblasts. It was divided by few focally sclerotic fibrous septa containing atypical stromal cells. Smooth muscle layer of the esophagus was extensively infiltrated close to the surgical margin (5mm). Surface epithelium was ulcerated. Areas of liponecrosis were often observed. The tumor had characteristic features of well-differentiated grade I liposarcoma with lipoma-like component (Figures 5A and 5B). 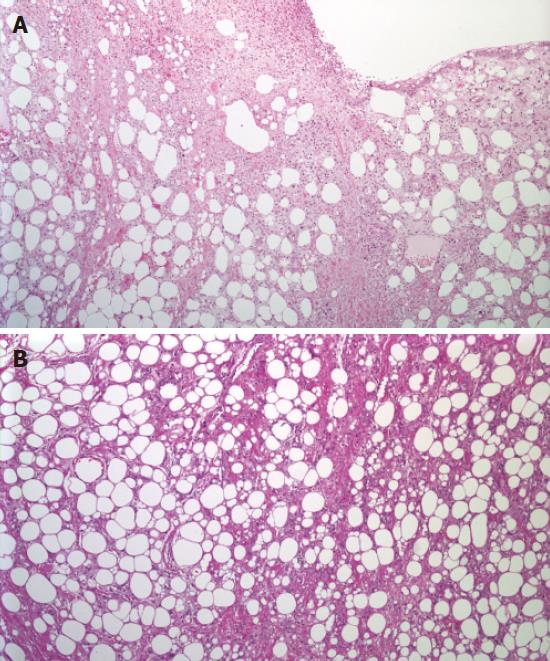 Figure 5 Neoplasm infiltrating smooth muscle layer of esophagus and ulcerating surface epithelium (A),HE 100x; and neoplasm consisting of differently-sized lipocytic element and multi-vacuolated lipoblasts (B), HE 400x. A small amount of sclerotic stroma was focally identified with the presence of atypical stromal cells.

The patient was followed up and 6 mo after the operation, CT scan of the chest and upper abdomen and upper GI endoscopy showed no tumor recurrence or distal metastases (Figure 6). 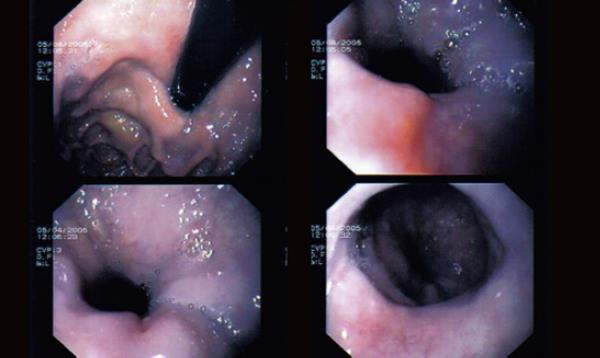 Figure 6 No evidence of tumor recurrence in gastrointestinal endoscopy after 6 mo of surgery.
DISCUSSION

Lipomatous tumors of the gastrointestinal tract are usually found in the distal ileum and the large bowel. Primary esophageal liposarcoma is exceedingly rare and slow growing tumor arising from mucosa and submucosa esophageal layers. The first case was described by Mansour et al  [2] in 1983. In the world literature 14 cases have been reported[2-15]. The mean age varies between 43 and 73 years with a male: female ratio of 1.16:1. The clinical symptoms of esophageal lipomatous tumors include progressive dysphagia, loss of weight, regurgitation, retrosternal pain, respiratory distress, odynophagia, sensation of a lump in the throat, hemorrhage, anemia, sudden death (asphyxia), vomiting (food or tumor fragments), fever and cough. The location of most tumors is the upper esophagus. There has been reported 5 myxoid, 1 pleiomorphic and 9 well-differentiated, with our case, esophageal liposarcomas[3,5,7,8,15].

Barium swallowing, esophageal manometry, radiological and endoscopic examinations could be confused with usual esophageal pathologies, such as megaesophagus, achalasia or bezoars. The only diagnostic methods for these tumors are surgical excision and histological examination[8,14,15].

Surgical treatment varies from simple enucleation or endoscopic resection to partial or total esophagectomy or trans-cervical, transthoracic, transgastric resections[2-15]. Local recurrences can be decreased with post-operative radiation. The most reliable prognostic factors are liposarcoma grade, histological subtype, location and adequacy of surgical treatment[8,10].

Our case presented with acute pain of epigastrium, retrosternal sensation of burning, persistant nausea, vomiting and dysphagia. The differential diagnosis of several studies (barium swallow, esophagomanometry and esophagogram) confused us and included megaesophagus, achalasia, mediastinitis, haematoma or trauma from esophagomanometry. The measurement of tumor density with CT scan and secondary upper GI endoscopy showed that this mass was an esophageal lipomatous tumor. Although the biopsies were negative for malignancy we proceeded to tumour enucleation. Only surgical removal and histologic examination could diagnose esophageal malignancies such as liposarcoma. Our patient was followed up and 6 mo post-operation the CT scan of the chest and upper abdomen and upper GI endoscopy showed no tumor recurrence or distal metastases.

We believe that our case is considerable because of the rarity of esophageal liposarcoma. Esophageal lipoma or liposarcoma can be diagnosed if a patient has a history of slow growing esophageal mass with a low tumor density in CT in combination with surgical resection and histologic examination.