AIM: To evaluate the effect of antisense vascular endothelial growth factor (VEGF) RNA (PCMV-FGEV) transfection on the profile of hepatocellular carcinoma (HCC) SMMC-7721 cells in vitro and in vivo.

METHODS: SMMC-7721 cells were transfected with PCMV-FGEV antisense, PCMV-VEGF sense and empty vector plasmid encapsulated by lipofectamine as antisense group, sense group and control group respectively. The positive cell clones were selected with G418. The stable transfection and expression of VEGF in the cells were determined by RT-PCR and immunohistochemistry. Cell proliferation was observed by MTT assay. FACS analysis was used to determine the effect of PCMV-FGEV transfection on cell apoptosis. The growth of transfected cells in vivo was also observed in nude mice.

RESULTS: VEGF expression was reduced in SMMC-7721 transfected with PCMV-FGEV, which was confirmed by RT-PCR and immunohistochemistry. No effect of PCMV-FGEV transfection was found on cell proliferation and cell apoptosis of SMMC-7721 in vitro. The growth of cells transfected with PCMV-FGEV was slow in nude mice and accompanied with obvious apoptosis. The latent time of tumors in the antisense group was 25.0 ± 1.8 d, which was longer than that in sense and control groups (F = 19.455, P < 0.01). The average tumor weight in antisense group (0.96 g ± 0.28 g) was the smallest among the three groups (F = 21.501, P < 0.01).

CONCLUSION: The expression of VEGF can be inhibited by antisense PCMV-FGEV. Antisense PCMV-FGEV has no effect on cell proliferation and apoptosis of SMMC-7721 in vitro but can inhibit tumor growth and induce cell apoptosis in vivo.

Angiogenesis plays an essential role in the proliferation and metastasis of tumor cells by supplying them with nutrition and oxygen and disposing waste products. Vascular endothelial growth factor (VEGF) is an important element in angiogenesis and permeability in normal and pathological tissue [1-6]. Hepatocellular carcinoma (HCC) with an extremely poor prognosis is known to have abundant blood supply. VEGF has been reported to play an important role in the angiogenesis of HCC[7-11]. Due to the high expression level of VEGF mRNA in HCC, antisense RNA is used to elucidate the possible therapeutic effects on HCC. Using this experimental approach, we explored the effects of antisense PCMV-FGEV transfection on the profile of HCC SMMC-7721 cells in vitro and in vivo.

Twelve female athymic BALB/c-nu/nu nude mice at the age of 4 - 6 wk were purchased from Chinese Academy of Sciences and maintained under conditions that met all requirements for use in an approved facility.

Guanidinium isothiocyanate-phenol single-step method was used to extract total RNA from cells using TRIzol following instructions of the kit. The integrity, purity and concentration of the extracted mRNA were detected with ultraviolet spectral photometer and agarose gel electrophoresis. The RNA extract dissolved in DEPC was stored at -70 °C. According to the sequences of human mRNA of VEGF, the primers were designed, synthesized and supplied by Boya Biotech, Shanghai, China (VEGF positive primer: 5’ -AATGCTTTCTCCGCTCTG-3’, negative primer:5’-TTGCTGCTCTACCTCCAC-3’ ; β-actin positive primer: 5’-TTGCGCTCAGGAGGAGCAAT-3’, negative primer: 5’-TTCCAGCCTTCCTTCCTGG-3’). First-strand cDNA was synthesized from 2μg RNA dissolved in water administered with DEPC, in which 0.2 μL oligo dT was added at 70°C for 5 min and placed on ice for 1 min, followed by 1μL M-MLV reverse transcriptase (200IU/μL), 0.5μL RNasin (40 IU/μL), 8μL 5×RT buffer, and 3μL dNTPs (10 mmol/L) at 42 °C for 60 min. The reverse transcriptase was inactivated at 95 °C for 5 min, then 5μL cDNA, 5μL 10×buffer, 3μL 2mmol/L dNTPs, 1μL 5 IU/L LA Taq enzyme and water were added to a volume of 40μL. The final concentrations of positive and negative primers were both 1uM/L. VEGF was amplified for 35 cycles at 94 °C for 1 min, at 55 °C for 1 min, at 72 °C for 2 min, and a final extension at 72 °C for 7 min. The area of electrophoresis bands （AREA）, the absorption of mean optical density (A) and product of AREA and A were quantitatively analyzed after the PCR product was detected with auto image manipulating system following agarose gel (2%) electrophoresis and stained with EB. The samples were controlled with blank and β-actin.

To investigate the influence of transfection on apoptosis, cells grown as a monolayer were incubated for 24 h, trypsinized, washed with PBS and fixed with 70% ethanol overnight at 4 °C. Then cells were intensively washed three times with PBS and incubated with 1% RNase for 30 min at 37 °C. Cells were measured with a FACScan flow cytometer (BD Biosciences) equipped with a 488 nm argon-ion laser and a Macintosh Power PC (G4). In general, 25 000 events were acquired using CellQuest Pro 4.0.1. Apoptotic cells were then calculated in percent using ModFIT Vers. 3.0 (BD Biosciences).

Cells were resuspended at the density of 5 × 107 cells in 400 μL of RPMI1640 and injected subcutaneously into the flank region of athymic nude mice. Twelve mice were distributed to antisense group, sense group or negative control group, 4 per group at random. All animals were observed for up to 10 wk following the injection, and then the tumor was excised.

For electron microscopy, small blocks of tumor tissue were fixed in 1% glutaraldehyde and 4% paraformaldehyde, postfixed in 1% osmium tetroxide and embedded in Epon 812, double-stained with uranyl acetate and lead citrate, and observed under a transmission electron microscope.

One-way analysis of variance (ANOVA) was used to compare the results between the different groups. All data were processed with SPSS10.0 statistical software. P < 0.05 was considered statistically significant. 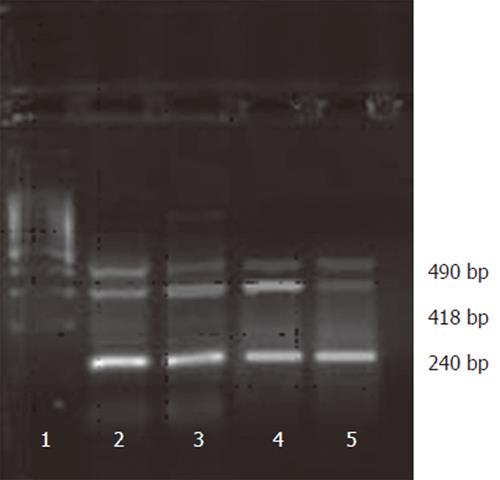 We used MTT assay to assess the proliferation of transfected SMMC-7721 cells in vitro. The difference in survival rates of the cells in sense group, antisense group, and control group was not significant (F = 0.869, P > 0.05). Further we used flow cytometry to compare the extent of cell apoptosis among the different groups and did not find the characteristic changes of cell apoptosis in each group.

Time of tumorigenesis in nude mice and weight of tumors 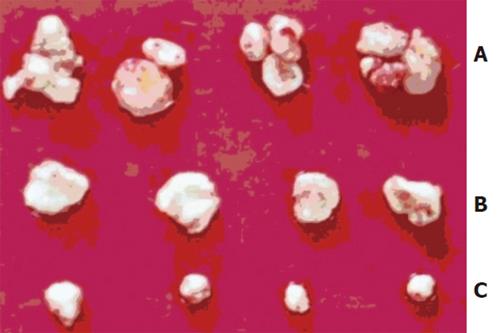 Electron micrographs of the tumor cells in antisense group showed characteristic chromatin condensation forming a crescentic-like cap, which was characteristic appearance of apoptosis. Comparatively, such chromatin change of the cells was not detectable in control or sense group (F = 24.548, P < 0.01).

Hepatocellular carcinoma (HCC) is one of the most common malignant neoplasms. All the treatment strategies used today have no good curative effect [12]. Gene therapy might be a promising way. Gene transfer is a key technique in gene therapy. Antisense gene technologies have been proven to be powerful tools for selective regulation of gene expression in experimental settings and are under evaluation for their therapeutic potential in clinic [13-16]. Antisense agents down-regulate the expression of specific target genes at mRNA level by pairing with their complementary RNA and preventing their translation into proteins. Theoretically, antisense molecules could be used to cure a variety of diseases, especially some cancers[17-20].

This study also demonstrated that antisense VEGF RNA could inhibit the growth of tumor in vivo. The secretion of VEGF and the vessels of tumor in antisense group were significantly decreased, leading to inhibition of tumor growth and metastasis. Becker et al[25] reported that transfecting the gene of soluble vascular endothelial growth factor receptor flk-1 to the prostate cancer nude model can inhibit tumor growth and metastasis. Zhang et al [26] found that angiogenic inhibition mediated by DNase targeting at vascular endothelial growth factor receptor -2 could inhibit the formation of vessels and the growth of tumor.

In conclusion, antisense VEGF RNA has inhibitory effect on the growth of HCC cells in vitro and in vivo and can be used in the treatment of HCC.