METHODS: We amplified HCV NS3 fragment from plasmid pBRTM/HCV 1-3011 containing the whole length of HCV genome, recombined it with expression vector pcDNA3.1(-) to form the eukaryotic expression vector pcDNA3.1(-)/NS3, and transfected human HL-7702 hepatocytes with the recombined plasmid by cationic polymers. The expressed HCV NS3 protein was detected and analyzed by immunohistochemical method and Western blot.

Hepatitis C virus (HCV) genome has only one open reading frame, which encodes for a precursor protein polymer containing 3000 amino acids. The protein products, including core, NS3, NS4B and NS5A, have an effect on hepatocellular carcinoma (HCC) induced by HCV. The non-structural protein 3 (NS3) segment plays a key role in replication of virus and is closely related with the growth of host cells. NS3 has attracted attention in many research fields of HCV. In this experiment, we constructed the eukaryotic expression vector containing HCV NS3 segment, which could express NS3 protein in normal human hepatocytes in vitro.

MATERIALS AND METHODS
Enzymes and reagents

HL-7702 cells were cultured and passaged in RPMI 1 640 medium supplemented with 10% fetal calf serum in an incubator containing 50 mL/L CO2 at 37 oC Cells were digested by 0.25% trypsin and seeded (2.5×104 cells per well) in 48-well culture plates. Cells were digested and counted at an interval of 24h with the average number of cells in 3 wells calculated per time.The detection was continued for 8 d. Then the population doubling time was calculated and growth curve of the cells was plotted.

We used S-P method to detect the expression of HCV NS3 protein in HL-7702 cells transfected with plasmid pcDNA3.1 (-)/NS3. Cells transfected with and without plasmid pcDNA3.1 (-) served as negative and blank control groups. Cells were cultured in 25-flasks till 85% convergence. The cells were washed three times with pre-cooled PBS before harvested. Then 1 milliliter lysis reagent containing 50 mmol/L TrisHCl (pH8.0),150 mmol/L NaCl，0.02％ sodium ajide, 0.1％SDS, 100 mg/LPMSF（dissolved in isopropyl alcohol, 1 mg/L aprotinin，1％Nonidet P-40, 0.5％ sodium deoxycholate) was added and incubated at 4 oC for 20 min. Then the lysis reagent mixed with broken cells was harvested and centrifuged at 12 000 r/min for 5 min. Twenty microliters of supernatant protein was resolved by SDS-8% polyacrylamide gel electrophoresis. After electrophoresis, the proteins were transferred onto a PVDF membrane, blocked in 5% skimmed milk for 1h, probed with monoclonal antibody to HCV NS3(1:1000) overnight at 4 oC. After washed three times with TBS containing 0.1% Tween 20, the membrane was treated with horseradish peroxidease-conjugated donkey anti-goat antibody for 3 h. Protein binding was detected by chemiluminescence reagent (ECL). Then the bands on X-film were assayed by densitometric scanning.

The PCR product of NS3 had correct molecule weight. Recycled PCR fragments were connected to T vector, E.coli was used to amplify the recombined vector pMD 18-T/NS3. Plasmid extracted from the positive clones could be digested by EcoRI and BamHI to two fragments (3000bp and 1900kb) as expected. DNA sequence analysis confirmed that the inserted fragment was a HCV NS3 segment containing 1893 nucleotides with right direction and reading frame. Initial codon, terminal codon and restriction sites of EcoRI , BamHI were successfully added to the ends. Vector pMD 18-T/NS3 was successfully recombined with plasmid pcDNA3.1(-). The length of the recombined vector pcDNA3.1(-)／NS3 was 7 300bp. After digested by EcoRI and BamHI, pcDNA3.1(-)／NS3 was cloven into two fragments (5 400 bp and 1900 kb) as expected (Figure 1A-1C). 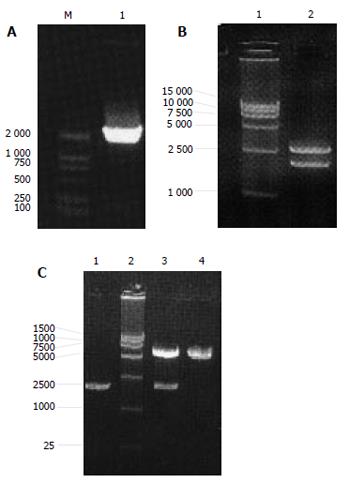 The incubation condition of HL-7702 cells and the cell growth curve were obtained (Figure 2 A, 2B) 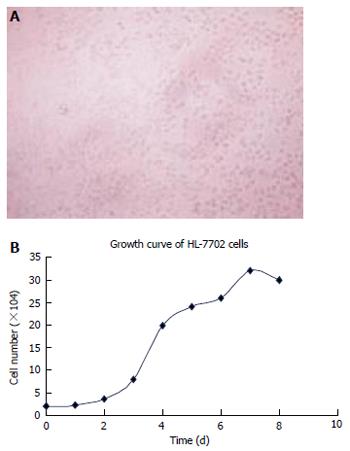 Hepatitis C virus(HCV) , the major etiological agent of non-A non-B hepatitis identified by the end of 1 980s, has infected more than 170 million persons worldwide and 85% of them could develop chronic hepatitis, liver function failure or hepatocellular carcinoma. Among all the gene segments of HCV, NS3 segment has many important physiological functions. Genetic variability of NS3 protein lies in different kinds of HCV-infected patients[2]. Nowadays little has been known about the nonstructural protein of HCV. NS3 protein contains many enzymes such as helicase , NTPase and serine protease, which can degrade the nonstructural segments of HCV polyprotein[3-5]. HCV core, NS3, NS5A and NS5B proteins can modulate cell proliferation independently by expressing p53[6]. Chronic hepatitis C induced by HCV could do great harm to human body, yet little has been known about the pathogenetic mechanism. HCV can impair the innate immunity system. It was reported that interaction between HCV NS3 protein and host TBK1 protein leads to inhibition of cellular antiviral responses[7] . Conserved C-terminal threonine of HCV NS3 can regulate autoproteolysis[8]. NS3 protein can down-regulate activities of protease peptide which could interfere with the activity of viral antigens, which may protect HCV from host immune surveillance, leading to persistent viral infection[9]. Besides, NS3/4A- mediated cleavage of TIR domain-containing adaptor protein potentially limits expression of multiple host defense genes, promoting persistent infections with this medically important virus [10].

Dolganiuc et al [11] showed that core protein and nonstructural protein 3 of HCV can induce production of IL-10 and mediate immunosuppression of against HCV. Some HCV proteins, such as core protein, NS3 and NS5A, not only regulate cell growth and interact with other cellular proteins, but also participate in programmed cell death under certain circumstances[12] . HCV can interfere with JAK/STAT signal pathway, leading to IFN production by down-regulating the expression of STAT1[13]. Additionally , NS3 can bind to a host protein (Sm-D) which interferes with the formation of small nuclear ribonuclear protein (snRNP) complexes ,so that occurrence of auto immune disease can be reduced[14].

In this experiment, we used pcDNA3.1(-) vector to construct the eukaryotic expression vector pcDNA3.1(-)/NS3 . DNA sequence analysis revealed that the inserted NS3 gene had correct reading frame and length(1893nt). Initial and terminal codons were successfully inserted into the ends of NS3 segment, which assured the correct expression of NS3 protein. We chose adult human HL-7702 hepatocytes as the host cells. The cells originate from embryonic liver, and were continuously cultivated in vitro. HL-7702 cells are slightly larger than normal human hepatocytes in vitro. The nuclei/cytoplasm ratio is high and cells are joined to each other tightly[29]. We transfected the constructed eukaryotic plasmid pcDNA3.1(-)/NS3 to HL-7702 cells, and detected the expressed protein by immunohistochemical staining. NS3 protein was expressed in the transfected cells, but not in blank cells and cells transfected with pcDNA3.1 (-). Western blot analysis showed that the expressed NS3 protein had correct molecular weight (70 000). The successful construction of eukaryotic plasmid pcDNA3.1 (-)/NS3 and correct expression of HCV NS3 protein in HL-7702 cells may contribute to the establishment of a system that can produce NS3 protein. These results may help further investigation of how NS3 protein affects immunity against virus.