AIM: To present our clinical experience with gallbladder perforation cases.

METHODS: Records of 332 patients who received medical and/or surgical treatment with the diagnosis of acute cholecystitis in our clinic between 1997 and 2006 were reviewed retrospectively. Sixteen (4.8%) of those patients had gallbladder perforation. The parameters including age, gender, time from the onset of symptoms to the time of surgery, diagnostic procedures, surgical treatment, morbidity, and mortality were evaluated.

Gallbladder perforation (GBP) is a rare but life threatening complication of acute cholecystitis. Sometimes GBP may not be different from uncomplicated acute cholecystitis with high morbidity and mortality rates because of delay in diagnosis[1-3]. Thus GBP still continues to be an important problem for the surgeons. Most cases can only be diagnosed during surgery[1,4]. Male acute cholecystitis cases with high fever, high white blood cell (WBC) count, and associated systemic diseases should be meticulously investigated[1,5,6].

Niemeier[7] in 1934, classified free gallbladder perforation and generalized biliary peritonitis as acute or typeIGBP, pericholecystic abscess and localized peritonitis as subacute or type II GBP, and cholecystoenteric fistula as chronic or type III GBP. This classification is still in use. We aimed to present our clinical experience with GBP in this study.

Records of 332 patients who received medical and/or surgical treatment with the diagnosis acute cholecystitis in our clinic between January 1997 and February 2006 were reviewed retrospectively. Sixteen (4.8%) of those patients were found to have gallbladder perforation. Perforations due to trauma, iatrogenic causes, and gallbladder (GB) carcinoma were excluded.

The original classification of Niemeier[7] was used to identify the patients. The parameters including age, gender, time from the onset of symptoms to the time of surgery, diagnostic procedures, surgical treatment, postoperative morbidity and mortality were evaluated. Direct abdominal X-ray series, abdominal ultrasound scanning (US), abdominal contrast-enhanced computerized tomography (CT), routine blood cell count, and blood chemistry tests were performed. Peritoneal spaces were lavaged thoroughly with isotonic saline and drains were placed for postoperative drainage in all of the patients.

Enlarged gallbladder, irregularity of the gallbladder walls at the fundic region, air density lateral to the fundus and corpus, and increased density of the mesentery anterior to the fundus suggesting free fluid on CT image of a patient with typeIIgallbladder perforation are shown in Figure 1. The abdominal CT image of a patient with hepatic abscess adjacent to the superior part of GB is shown in Figure 2. 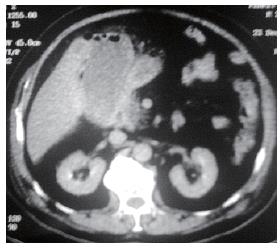 Figure 1 Contrast-enhanced CT image at the level of gallbladder. 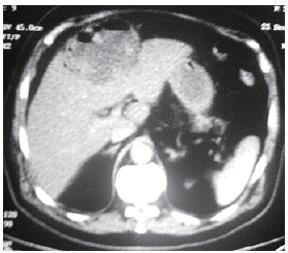 The patients underwent surgery after administration of intravenous crystalloid solutions, and were treated with analgesics and antibiotic (third generation cephalosporins) within the first 36 h (mean 9 h) after admission. The patients who had associated diseases such as diabetes, chronic obstructive pulmonary disease (COPD), and AHD underwent surgery after specific medical treatment was started. Antibiotic treatment was changed when required, according to the results of microbiological assessment of the infected bile specimens obtained from the gall bladder. The most common preoperative diagnoses were perforated cholecystitis in patients with typeIgallbladder perforations, and acute cholecystitis in patients with typeIIgallbladder perforations. Laparoscopic cholecystectomy was performed in 6 patients, two of them had typeIgallbladder perforation, and four typeIIgallbladder perforation. Conversion was required in 2 of them due to unclear anatomy. Laparotomy was performed in the remaining 10 patients. Perforations were recognized intraoperatively in 11 patients. The perforated site of the GB was the fundus in 9 patients, the corpus in 3 patients, the infundibulum in 3 patients, and the cystic duct in 1 patient. Two patients with typeIIgallbladder perforation also had hepatic abscesses, which were covered by the omentum. Hepatic abscesses were also drained in these patients. All of the patients received a cholecystectomy. Common bile duct exploration was performed, gall stones were extracted, and a T-tube was placed into the common bile duct in addition to cholecystectomy in 1 patient with obstructive jaundice. One of the 2 patients had a cholecystoduodenal fistula (type III gallbladder perforations) underwent surgery for gastrointestinal tract obstruction due to bile stones in the jejunum, which were removed through an enterotomy. Gall stones were also found in the duodenum of the other patient with type III gallbladder perforation and removed through a duodenotomy.

The median hospital stay was 15 d (4-26 d). Two patients (12.5%) died of sepsis and multiple organ failure in the early postoperative period. One was a female patient at the age of 79 with type III gallbladder perforation and COPD. The other was a 84 year-old male patient with delayed typeIIgallbladder perforation and pericholecystic abscess associated with AHD and diabetes. Subhepatic abscess, pelvic abscess, pneumonia, pancreatitis and acute renal failure were found in 6 patients (Table 2). Subhepatic and pelvic abscesses were drained percutaneously under ultrasound guidance. The other diseases were treated conservatively.

Inflammation may progress and cause ischemia and necrosis, thus resulting GBP in 2% to 11% of acute cholecystitis patients[6,8,9]. GBP also develops following acalculous cholecystitis, although rare[10,11]. GB fundus, the most distal part with regard to blood supply, is the most common site of perforation[8,12]. The incidence of GBP was 4.5% and the most frequent site of perforation was the fundus (60%) in our study. Six of the 7 typeIgallbladder perforations and 3 of 7 typeIIgallbladder perforations were at the fundus. When GB is perforated at the fundus, it is less possibly covered by the omentum, thus the bile drains into the peritoneal space. If the perforation site is not at the fundus, it is easily sealed by the omentum or the intestines and the condition remains limited in the right upper quadrant with formation of a plastrone and pericholecystic fluid. This observation suggests that if the perforation site is at the fundus, it is more likely to end up with a typeIperforation. The relation between the site and the type of GBP has not been defined. Although statistical analysis was not possible because of the insufficient number of patients in this series, this observation may be supported by larger series.

US findings in acute cholecystitis, such as the GB wall thickening, GB distension, pericholecystic free fluid, and positive sonographic Murphy sign, may also be present in gallbladder perforation cases[2,9,20]. Sood et al [2] noted that the sonographic hole sign, in which the defect in GB wall is visualized, is the only reliable sign of gallbladder perforation. They reported that GB wall defect could be shown with a high resolution ultrasound scanner device in 70% of patients[2]. However, Kim et al[21] reported that the site of defect could not be visualized on US in any patients, which is similar to our study. On the other hand, CT can show more accurate signs of free intraperitoneal fluid, pericholecystic fluid, and abscess[1,2,22]. CT can also show GB wall thickness and the defect on the wall due to perforation[2,20]. In our study, all of the 5 patients who had the diagnosis of gallbladder perforation preoperatively were diagnosed by CT. Since the patients were admitted for acute abdominal pain, standard pelvic CT rather than upper abdominal CT was applied. Kim et al[21] reported that the defect could not be visualized on CT in 54% of patients. Doppler ultrasound, magnetic resonance imaging and radionuclide methods have been used in the diagnosis of gallbladder perforation[23-25]. The majority of our patients with typeII gallbladder perforation were initially treated conservatively and then underwent surgery as no improvement was observed during the first 3 d.