Cell proliferation is an important process in life for growth of normal and cancer cells. The signal transduction pathways activated during this process are strictly regulated. This editorial focuses on the role of nicotine, a mitogen, in the induction of signaling pathways resulting in proliferation of pancreatic tumor cells and compares these events with those in normal acinar cells isolated from the rat pancreas. The data shows striking similarities between these two cellular systems. In addition, the editorial reviews very recent literature of the contribution of MAPK signaling in cell lines associated with human diseases. A prospective cellular model of nicotine induced activation of MAPK cascade is presented.

Cell proliferation is a strictly regulated event. The rate of cell division depends upon instructions by which the cell responds to mitogenic or other stimuli in order to enter the cell cycle substantiated by cyclin dependent kinases (CDKs) which are activated by cyclins. In a normal resting cell the intracellular signaling proteins and genes, activated by extracellular growth factors, are quiescent. However, when stimulated by growth factors, the cells undergo proliferation. In cancer cells, intracellular signaling proteins and oncogenes activated by the growth factors remain constitutively active[1]. In response to growth factors or other mitogenic stimuli, three major types of signal transduction pathways are activated in a cell: mitogen activated protein kinase (MAPK) pathways, protein kinase C (PKC) pathways and JAK/STAT pathways. Activation of each of these pathways requires a phosphorylation step that regulates cell proliferation and differentiation[1].

Understanding of the complex molecular mechanisms involved in the regulation of cell proliferation in normal and cancer cells will provide us with tools to intervene in the regulation and control of the cell cycle in the presence of a mitogen. Qualitatively speaking, the biochemistry of growth of tumor and normal cells appear similar[2]. The fundamental difference most probably lies in a relaxation of regulation of cell growth[3,4]. Here we will discuss the role of nicotine in cell proliferation in reference to AR42J cells (a rat pancreatic tumor cell line) and look further into extended observations from our recent findings using primary cells derived from the normal rat pancreas when exposed to nicotine in culture.

Nicotine is a major component of cigarette smoke and is a known risk factor for the development of numerous diseases[5-9]. The role of nicotine/smoking as a risk factor for the induction of pancreatic inflammation and pancreatic cancer has been reported recently[10,11]. The mechanism by which nicotine induces such pathologies is as yet unknown. Understanding of the proliferative potential of nicotine in primary and tumor cells of the pancreas will allow us to develop measures that will ultimately lead to intervention, prevention and treatment.

AR42J is a stable, rat pancreatic tumor cell line derived from the hyperplastic pancreatic nodules of male rats following the administration of azaserine[12]. Because of their unique properties of stability, secretory capacity, and growth potential[13], these cells have been extensively used as an in vitro model for studying exocytotic secretory processes and activation of signal transduction pathways[14-16]. In response to regulatory peptides, AR42J cells can be stimulated to secrete enzymes and induce proliferation[13,17,18].

MAPK enzymes play critical roles in the regulation of cell proliferation, differentiation, and apoptosis, and are comprised of a ubiquitous family of tyrosine/threonine kinases that include the extracellular signal-regulated kinases (ERK1/2), c-jun NH2-terminal kinases (JNK1/2), and p38 MAPK. Cytokines and mitogens trigger signaling cascades that lead to the activation of MAPK, as reported in studies with different cell lines[19-24].

Activation of ERK has been primarily implicated in cell proliferation and survival, whereas activation of JNK and p38 are associated with growth arrest and apoptosis[25-27]. Induction of MAPK’s leads to the phosphorylation and activation of a variety of proteins, including a number of transcription factors involved in regulating the expression of genes controlling cellular proliferation[28-30]. ERK1/2 is found in most tumors and is involved in gastric carcinogenesis[31]. Differential activation of MAPK by cholecystokinin (CCK) and bombesin has been reported in AR42J cells[17].

ACTIVATION OF SIGNALING PATHWAYS BY NICOTINE

Nicotine is known to activate several MAPK signaling pathways in a variety of tissue and cell types[32-37]. It also behaves like a growth factor promoting survival of human lung cancer cells[38]. Studies show that nicotine can increase the cell numbers of certain cancer cell lines[39-41]. This suggests that nicotine exposure can lead to the disruption of the dynamic balance between cell death and proliferation, which is required for normal functioning of cells.

In pulmonary neuroendocrine cells, nicotine binds to nicotinic receptors, resulting in the phosphorylation of ERK and stimulation of DNA synthesis[32,42]. Furthermore, nicotine induces Ca2+ influx and stimulates the Ras/ERK cascade that promotes cell survival in neuronal cells[43]. Thus, ERK1/2 is one of the possible signaling pathways involved in nicotine-induced cell proliferation. Studies by Bose et al[44] on the mitogenic effect of nicotine on AR42J cells show that nicotine activates ERK1/2 in AR42J cells and induces proliferation without affecting basal and stimulated enzyme secretion. These data suggest that MAPK signaling by nicotine in AR42J cells is independent of the secretory response.

ACTIVATION OF SIGNALING PATHWAYS BY NICOTINE IN PRIMARY CELLS: EFFECTS ON PROLIFERATION

Primary cells are normally derived from intact rat pancreas. The functional status of the primary acinar cells exposed to nicotine under basal and stimulated conditions has been reported[45,46]. However, the ability of nicotine to activate MAPK signaling pathways and subsequent proliferation has not yet been reported. It has been shown that p42 MAPK is fully activated at 5 min by cholecystokinin (CCK) in freshly isolated pancreatic acini, and JNK is activated maximally at 30 min and remains significantly elevated at 60 min[47,14]. Unpublished studies from our laboratory show that exposure of primary cells to nicotine in short term culture activates ERK1/2 MAPK with very little or no effect on JNK and p38 MAPK. The results on primary cells from this study and the studies cited above thus demonstrate that some parallelism in the time-dependent activation of ERK by CCK and nicotine exists, although these two secretagogues are completely different from one another in terms of their biological actions on the pancreas[15,14,48]. Further, cell proliferation studies conducted and monitored with three independent methods (MTT assay, BrdU assay and flow cytometry) confirmed the proliferative ability of primary cells in the presence of nicotine. This response is reversed in the presence of the ERK1/2 inhibitor UO126, suggesting that the proliferation induced by nicotine in primary cells is MAPK-dependent. Activation of these signals and application of their inhibitors in the presence of nicotine had no effect on the stimulated enzyme secretion by these cells (unpublished observations). The proliferation of primary cells by nicotine thus appears to be independent of the stimulus-secretion coupling response of amylase secretion.

Recently Li et al have shown that anti-apoptotic human phosphatidylethanolamine-binding protein (hPEBP4) silencing, promotes tumor necrosis factor related apoptosis-inducing ligand (TRAIL)-induced apoptosis of human ovarian cancer cells by activating ERK and JNK pathways[57]. Mutant huntingtin, a protein derived from Huntington disease (HD) affects signaling at upstream points activating ERK and JNK, suggesting that pharmacological intervention of MAPK pathways may be an appropriate approach to HD therapy[58]. ERK 1 expression has been shown to be an early marker of cervical carcinogenesis[59]. In human glomerulopathies, activation of ERK pathways has been correlated with cell proliferation, histologic lesions, and renal dysfunction[60]. In human neutrophils, Rac/Cdc-dependent activation of MAPK/ERK is a critical event in the immediate phagocytic response of PMNs to microbial challenge[61]. IL-1 beta stimulated human airway smooth muscle cells demonstrate activated p38 MAPK, JNK kinase and p42/p44 ERK suggesting their role in the inflammatory process in asthma[62]. In the human myeloma cell line SKO-007, activation of ERK in the Ras/MAPK signaling pathway has been shown to play important differences in their responsiveness to IFN-alpha[63]. Signaling through SAPK/MAK pathways is shown to be a typical feature of chronic synovitis in rheumatoid arthritis, but not in degenerative joint disease. SAPK/MAPK signaling is found at distinct sites in the synovial tissue and is induced by proinflammatory cytokines[64].

The possible signaling pathways leading to cell proliferation by nicotine are shown in Figure 1 below. The schematic shows that nicotine enters the cell either by diffusion or via a calcium regulated pathway as demonstrated earlier[65]. Entry of nicotine induces the activation of Ras-Raf-MEK-ERK pathways inducing phosphorylation of the MAP kinase cascade. Substrates of ERK in the cytosol include tyrosine kinase receptors among others. Substrates of ERK in the nucleus include transcription factors such as ELK-1 and others. The endpoint of ERK phosphorylation leads to the assembly of transcription factors which stimulate the production of proteins causing cells to proliferate and grow. 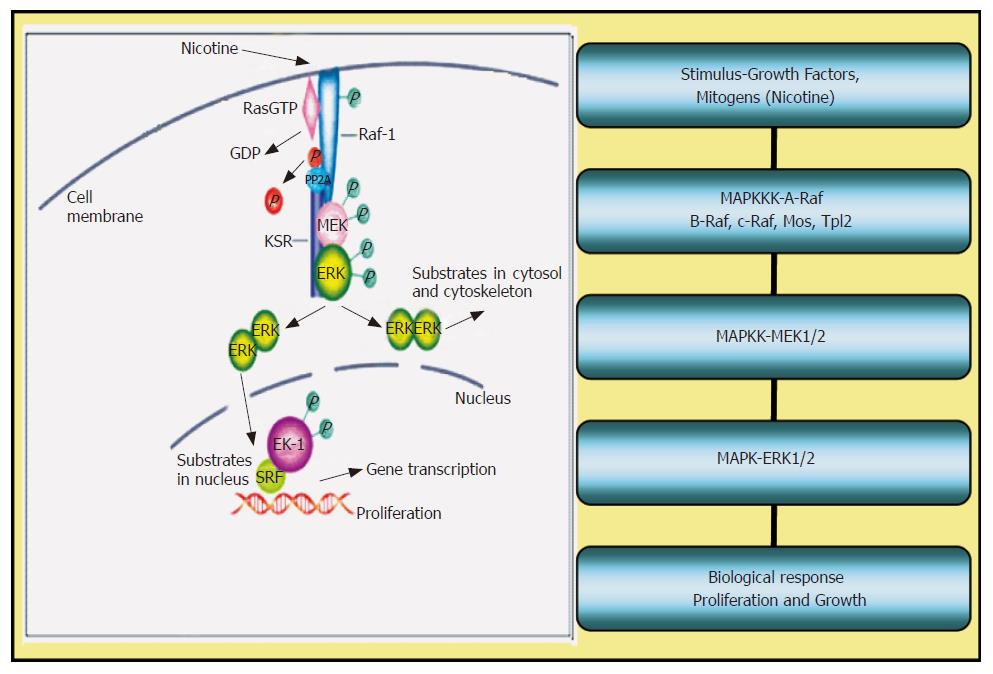 Figure 1 The possible organisation of the Ras-Raf-MEK-ERK pathway by nicotine.

The parallelism observed in nicotine-induced cell proliferation studies conducted in a mutant pancreatic cell line and freshly isolated pancreatic acinar cells suggest the possibility that this stable mutant line can be used for extensive evaluation of signal transduction pathways mediating oncogenesis. The data gathered from these studies can be extended to assess the mechanisms of development of pancreatic diseases induced in animal models exposed to chronic/sub-chronic exposure to nicotine or cigarette smoking.