METHODS: Thirty-one patients who had underwent a potentially curative resection for Stage III and IV (M0) gastric cancer were enrolled. Therapy consists of one cycle of FP (continuous infusion of 5-FU 1000 mg/m2 on d 1 to 5 and cisplatin 60 mg/m2 on d 1) followed by 4500 cGy (180 cGy/d) with capecitabine (1650 mg/m2 daily throughout radiotherapy). Four wk after completion of the radiotherapy, patients received three additional cycles of FP every three wk. The median follow-up duration was 22.2 mo.

RESULTS: The 3-year disease free and overall survival in this study were 82.7% and 83.4%, respectively. Four patients (12.9%) showed relapse during follow-up. Eight patients did not complete all planned adjuvant therapy. Grade 3/4 toxicities included neutropenia in 50.2%, anemia in 12.9%, thrombocytopenia in 3.2% and nausea/vomiting in 3.2%. Neither grade 3/4 hand foot syndrome nor treatment related febrile neutropenia or death were observed.

CONCLUSION: These preliminary results suggest that this postoperative adjuvant chemoradiation regimen of FP before and after capecitabine and concurrent radiotherapy appears well tolerated and offers a comparable toxicity profile to the chemoradiation regimen utilized in INT-0116. This treatment modality allowed successful loco-regional control rate and 3-year overall survival.

Numerous trials of postoperative chemotherapy or immunotherapy for advanced gastric cancer have shown no conclusive benefits[1,2]. The use of adjuvant radiation therapy in the treatment of gastric cancer has been investigated owing to the substantial incidence of local and regional failure after primary surgical resection. Following a potentially curative resection of the gastric cancer, a United States Intergroup study (INT-0116) demonstrated superior survival for patients who received a chemoradiotherapy[3]. These results established a new standard care for patients following curative resection of gastric cancer. However, the principal benefit associated with postoperative 5-FU/leucovorin (LV), and radiotherapy was reduction of the loco-regional failure; differences in the rate of distant failure were less pronounced.

We conducted a pilot study to examine the efficacy of chemotherapeutic regimens FP (Cisplatin and continuous infusion of 5-FU) that replaced 5-FU/LV and capecitabine for the radiosensitizer during external radiotherapy in patients with advanced gastric cancer.

MATERIALS AND METHODS
Patients and evaluation

Three wk after surgery, all patients received one cycle of FP chemotherapy (5-FU 1000 mg/m2 continuous infusion on day 1-5, cisplatin 60 mg/m2 on d 1) followed by regional radiotherapy with capecitabine (1650 mg/m2 daily during the entire radiotherapy course) in three wk. Four wk after completion of radiotherapy, patients received three additional cycles of FP regimen every three wk (Figure 1). According to phase I trial evaluating the concurrent combination of radiotherapy and capecitabine in rectal cancer[6], oral capecitabine was given at a dose of 1650 mg/m2 daily, which was divided into two doses given 12 h apart. A total dose of 4500 cGy in 25 fractions over five wk was delivered to the target volume that included the gastric bed, anastomosis, stump, and regional lymph nodes areas. We used the definition of the Japanese Research Society for Gastric Cancer for the delineation of the regional node areas[7]. The tumor bed was defined by preoperative computed tomographic (CT) imaging, and in some instances, surgical clips[8]. Radiation was delivered with 15 MV photons. Typical anterior-posterior/posterior-anterior (AP-PA) portals extended from the hemidiaphragm to the L3 body, and laterally, from the external border of the postoperative gastric remnant to include the whole gastric area, duodenum, and porta hepatis. Doses were limited so that less than 3000 cGy of radiation of the hepatic volume. The equivalent of at least two thirds of one kidney was spared from the field of radiation. 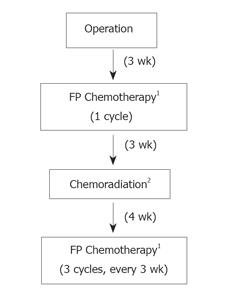 All patients were followed up every 3 mo for the first year and then every 4-6 mo for at least 3 years. The regular follow-up program entailed a physical examination, chest radiography, complete blood count, liver function tests, abdominopelvic computed tomography and gastroscopy as clinically indicated. Toxicities were recorded according to the National Cancer Institute Common Toxicity Criteria[9]. Disease relapse or progression was documented by biopsy or cytology reports or by clinical evidence of radiographic studies. Survival, as well as loco-regional and distant relapse, was analyzed with the Kaplan-Meier product limited method. The site and date of first relapse, and the cause and date of death were recorded. The sites of relapse were classified as follows: the relapse was coded as loco-regional if tumor was detected within the radiation fields (including gastric bed, remnant stomach, and surgical anastomosis); as peritoneal if tumor was detected in the peritoneal cavity; and as distant if the metastases were diagnosed outside the peritoneal cavity or there was liver metastasis.

Of the 31 patients assigned to this study, 23(74.2%) completed treatment as planned. Treatment was interrupted in 6 patients (19.3%) because of toxic effects. Two patients (6.4%) declined further treatment. All patients, including those who stopped treatment, were reviewed (Table 2).

Toxicities of grade 3/4 are summarized in Table 3. The most common toxicity was neutropenia (50.2%). Anemia (12.9%), thrombocytopenia, nausea and vomiting, diarrhea and abdominal pain were also detected, and symptomatic treatments were performed as appropriate. There was no grade 3/4 hand foot syndrome, and there have been no treatment related febrile neutropenia. Most patients with grade 1/2 hand-foot syndrome were managed with vitamin B6 administration and supportive care. Two patients (6.4%) underwent re-laparotomy for intestinal obstruction unrelated to tumor recurrence but of intestinal adhesion. No toxic death was observed.

During a median follow-up period of 22.2 mo, 3(9.7%) patients died of recurrence. The 3-year disease free and overall survivals in this study were 82.7% and 83.4%, respectively (Figure 2). Four patients (12.9%) were relapsed during follow-up. Loco-regional recurrence occurred in 3(9.7%) of the relapsed patients. Peritoneal relapse was reported in 2(6.4%) patients and 3(9.7%) had distant metastases. Patients had relapses at multiple sites, and the total number of relapse was greater than the numbers of relapsed patients (Table 4). 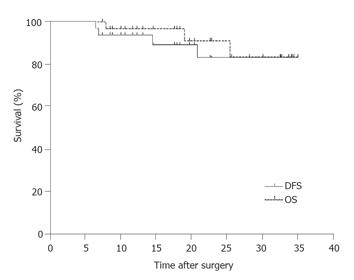 The major change in adjuvant therapy for gastric cancer comes from the results of the INT-0116 trial[3], which used two cycles of 5-FU and leucovorin followed by concurrent chemoradiotherapy with 4500 cGy radiation given using fields that encompassed the entire gastric bed. This study demonstrated a major advantage in overall survival, disease-free survival, and loco-regional control with the use of adjuvant chemoradiotherapy. These data suggest that the primary effect of postoperative chemoradiotherapy was a reduction in local and regional recurrence rates without apparent differences in distant relapse rates. However, questions have been raised about the adequacy of the chemotherapy and surgery of the study. The essential weakness of the INT-0116 study is that they performed D2 lymph node dissection in only 10% of patients. Hence, comparable local control might be achievable with optimal surgery that includes D2 lymph node dissection and the addition of more active chemotherapy.

The majority of trials using older systemic regimens for postoperative adjuvant chemotherapy for advanced gastric cancer failed to demonstrate a consistent reduction in the risk of recurrence[1,2,10]. A modest but statistically significant survival benefit appeared to be confined to the Asian studies only in the postoperative chemotherapy group[11-13]. The combination of cisplatin and 5-FU has also been extensively studied in gastric cancer. Phase II studies have indicated substantial activity with acceptable toxicity. Prospective randomized studies in patients with stage IV disease have not consistently demonstrated a significant improvement in survival for patients receiving cisplatin-containing regimens when compared to other combination or single agent[10,14]. However, response rates have been in general higher when cisplatin was included. Therefore, there has been substantial interest in the use of cisplatin-containing regimens in the adjuvant setting.

Capecitabine is oral prodrug of 5-FU and it would be a reasonable alternative when 5-FU or biomodulated 5-FU alone is being considered. Interest has also been shown in the use of oral agents instead of continuous-infusion 5-FU. Capecitabine has generated a great deal of interest as a simpler method of drug delivery. It is absorbed intact through the gut and then activated by a series of enzymatic alterations[15]. Phase II studies demonstrated that capecitabine had substantial activity in colorectal cancer, with an acceptable toxicity profile[16]. Phase III randomized clinical trials performed both in the United States and Europe have now shown that this oral agent is at least as effective as intravenous 5-FU/leucovorin, and the toxicity profile of capecitabine is more favorable than that of the Mayo Clinic schedule of 5-FU[17-19].