AIM: To evaluate the role of microcirculatory disorder (MCD) and the therapeutic effectiveness of tetramethylpyrazine (TMP) on intestinal mucosa injury in rats with acute necrotizing pancreatitis (ANP).

CONCLUSION: MCD is an important factor for intestinal injury in ANP. TMP can ameliorate the condition of MCD and the damage to pancreas and intestine.

Acute pancreatitis (AP) is often complicated by intestinal injury. However, its pathogenesis remains unclear. As we know, AP involves a complex array of mediators initiating and amplifying the systemic inflammatory response and therefore leads to failure of the distant organ systems, such as the lungs, intestine and kidneys[1-3]. Failure of intestinal barrier function often occurs in acute necrotic pancreatitis (ANP), resulting in the increased intestinal permeability and subsequent translocation of bacteria or/and endotoxin from gut[4]. Recent studies indicate that during the pathogenesis of ANP, changes in microcirculation play an important role in the worsening of pancreatitis[5]. A number of agents have been tried for preventing or ameliorating this destructive effect on intestine in experiment conditions. Pharmacologic studies have demonstrated that tetramethylpyrazine (TMP), an intravenous drug made from traditional Chinese herbs, is able to inhibit release of intracellular calcium and to scavenge oxygen free radicals[6,7]. The significant efficacy of TMP in cerebral ischemia and reperfusion injury has been confirmed. This study was to evaluate the role of microcirculatory disorder (MCD) in ANP of rats and the therapeutic effectiveness of TMP on intestinal injury in ANP.

Adult Sprague-Dawley rats of both sexes weighing 250-300 g were provided by the Laboratory Animal Center of Jiangsu University. The animals were fed with standard rat chow and water ad libitum. The rats were allowed to acclimatize to our laboratory conditions for 1 wk and then subjected to mesh stainless-steel cages at a constant temperature (21 ± 1°C) in a 12 h day/night cycle. Prior to experiment, the rats were fasted overnight with free access to water.

The animals were randomly divided into control group (C group), ANP group not treated with TMP (P group), ANP group treated with TMP (T group) with 64 rats in each group. Each group was further divided into 0.5, 2, 6 and 12 h subgroups, respectively. The rats were anaesthetized with sodium pentobarbital (50 mg/kg, ip) and operated under aseptic conditions. The rats were infused with sodium taurocholate (50 g/L, 4 mL/kg, Ward Blen Kinsop CO) through the pancreatic membrane to induce ANP model as previously described[8]. After 5-10 min, pancreatic edema and dotted bleeding occurred. The rats in T group were infused with sodium taurocholate. Then 6 g/L TMP (Wuxi No. 7 Pharmaceutical Factory, China; batch number: 0008241) was infused via femoral vein (10 mL/kg). The rats in C group received isovolumetric injection of 9 g/L physiological saline solution. The abdominal wounds were closed and all the rats were returned to their cages. Thirty-four animals in each group were sacrificed at 0.5, 2, 6 and 12 h after infusion for further examination. Part of distal ileum was removed immediately and fixed in paraformaldehyde solution for 12-24 h and paraffin-embedded for routine histopathologic analysis and measurement of myeloperoxidase (MPO) activity. The histopathologists were blinded to routine histopathologic analysis. The other rats in each group were used for intestinal blood flow determination by intravenous injection of radioactive microsphere technique (RMT).

At 0.5, 2, 6 and 12 h after infusion, intestinal blood perfusion values were determined using RMT as previously described[9] and modified by Chen and Dai[10]. 99Tcm-labeled microspheres (99Mo-99Tcm generator preparation provided by Chinese Institute of Nuclear Power) with a specific activity of 74 MBq/mL were used for measurement of blood flow. The right carotid artery was catheterized with the tip of the catheter placed in the left ventricle for infusion of 99Tcm-labeled microspheres. One mL 99Tcm radioactive microspheres (approximately 500 000 microspheres) was injected for 10 s via the catheter with its tip in the aortic ventricle of heart. A reference blood sample was obtained from the femoral artery catheter for 60 s at a constant rate of 1 mL/min with a continuous-withdrawal pump. The microsphere animals were killed by intra-arterial injection of 2 mL 100 g/L KCL.The distal ileum was removed, weighed and cut into small pieces and placed in a γ counter (GC-1200 gamma radioimmunoassay counter was from USTC Chuangxin CO.Ltd) to determine the radioactivity. Samples from each animal were counted and expressed as counts per minute (CPM). The blood flow values were calculated according to the following formula:

Sequestrations of neutrophils within the intestinal mucosa were evaluated by quantifying tissue MPO activity as previously described[11]. Intestinal tissue was removed and immediately frozen and stored at -80°C until MPO assay with a 753 UV-Vis spectrophotometer (Shanghai Optical Instrument Factory). The results were expressed as nKat/g of tissue.

The rats were killed by intra-arterial injection of 2 mL 100 g/L KCl. The whole pancreas and parts of distal ileum were obtained and promptly fixed in 40 g/L phosphate-buffered formaldehyde for further studies. Paraffin-embedded tissue sections (5-7 μm thick) were stained with hematoxylin and eosin. Histological evaluation was performed under light microscope by two blinded observers on two separate occasions. Mucosal damage was assessed according to the standard scale of Chiu et al[12]. Grading was performed and classified as: 0 = normal mucosa; 1 = development of subepithelial space at the tip of the villus; 2 = extension of the space with epithelial lifting; 3 = massive epithelial lifting; 4 = denuded villi; 5 = disintegration of the lamina propria (Figure 1) . 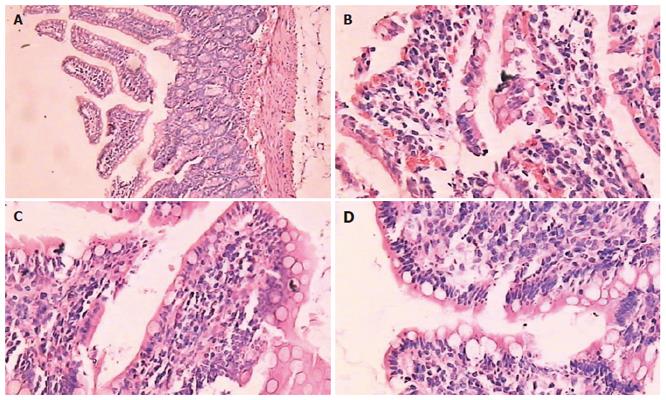 After induction of ANP model, pancreas showed mild edema and congestion. Two hours after introduction of the model, typical pathologic changes were found in ANP, such as a large number of inflammatory cells, necrosis of adjacent fat tissues, interstitial edema, parenchyma hemorrhage and necrosis, large amount of ascites. The results had a concordance of 100% of the readings by 2 pathologists. The degree of intestinal pathological injury is shown in Table 3. The grades of P group were significantly higher than those of control group (P < 0.01).The histopathological grades of T group were significantly lower than those of P group (P < 0.05) (Figure 1).

Microcirculatory mechanisms are involved in the develop-ment of acute pancreatitis[13,14]. Changes in microcirculation is an important factor for the development of ANP. It can damage the pancreas and extra pancreatic vital organs[15,16], leading to a series of changes including vasoconstriction, ischemia, increased vascular permeability, impairment of nutrient tissue perfusion, ischemia/reperfusion injury, leukocyte adherence. RMT provides an efficient method for estimating blood flow to various organs in the body. Our results revealed that, at the early stage of ANP, intestinal mucosal blood flow decreased significantly 0.5 h after injection of 50 g/L sodium taurocholate as compared with control group (P < 0.01). Intestinal mucosal injury occurred at the same time which might result from ANP and release of inflammatory mediators. Changes in the nerve endocrine system bring about redistribution of viscera blood flow, producing a sharp decrease in intestinal blood flow. Intestinal mucosa is sensitive to the shortage of blood and oxygen. Due to the further decrease in circulatory blood and over activation of inflammatory mediators, much lower intestinal blood flow further damages the mucosa, suggesting that microcirculation disturbances may contribute to intestinal mucosal damage.

TMP is widely used in traditional Chinese medicine, often in combination with other herbal medicines. It is traditionally used to treat a diversity of ailments, particularly cardiovascular disorders such as atherosclerosis or blood clotting abnormalities. TMP can intervene in hemorheological events in the organs, such as blood flow, erythrocyte deformation, leukocyte adhesion, platelet aggregation and thrombolysis[17]. TMP protects against vascular endothelial cell injuries induced by hydrogen peroxide[18] and tissue injuries caused by activated neutrophils by scavenging oxygen radicals[19], as well as enhances the action against free radicals and inhibits ca function, which may be one of the mechanisms underlying the protection of cells against intestinal ischemic reperfusion injury[20].