Most of the foreign bodies detected in adult gastrointestinal systems are accidentally swallowed pins. In this study, we presented a case with intracolonic multiple pebbles. A 20-year-old man was admitted to emergency surgery policlinic for abdominal pain for 2 d without any alleviation or aggravation. His upright plain abdominal radiographic imaging revealed about 30-40 overt dense opacities in lumen of colonic segments, with oval and well shaped contours, each approximately 1 cm x 1 cm in size. The multiplanar reconstructions and three-dimensional images combined with sectional screening showed that all pebbles had passed completely into the colon and no foreign bodies had remained in the ileal segments. On psychiatric assessment, he was found to have immature personality features, difficulty in overcoming stressors and adaptation disorder. He recovered by conservative management and radiographic monitoring applied during his follow-up. Thus, it can be concluded that, in differential diagnosis of abdominal pain in adult ages, though less frequently seen than in children, gastrointestinal system foreign bodies should always be kept in mind and it should be considered that ingestion of pebbles may be one of the factors contributing to abdominal pain particularly in young adults with psychiatric problems. In such cases suspected of having foreign bodies which cannot be detected by plain films, abdominal tomography can be an alternative for diagnostic imaging.

The frequency of foreign body detection in gastrointestinal system is less in adulthood compared to childhood. Accidentally swallowed pins account for most of the foreign bodies found in adult gastrointestinal systems. Oral dental implants, bezoars, chicken-fish bones, packages of medications and drugs are among the other foreign bodies commonly seen to be swallowed[1]. Incidence of foreign bodies swallowed by an individual with mental defect or due to conversive reaction is relatively rarer. Regardless of the types of the objects, foreign bodies are very rare to result in a serious clinical condition in intestinal lumen. If it does not develop an emergency surgical indication, there is no need to hospitalize the cases. Conservative follow-up approach is a generally preferred method. Out-patient follow-up through serial physical examination and plain films will be enough. A good observation and quick radiographic monitoring is suggested for the follow-up of such patients. As long as the objects do not get stuck in intestinal transition points such as pylorus or ileo-caecal valve, they are generally passed rectally out within a few days[2]. We present herein a young adult case of intracolonic multiple pebbles, who was managed successfully by serial radiographic imaging and conventional approach, without surgical intervention.

A 20-year-old male presented in a peripheral hospital with the complaint of abdominal pain. With a provisional diagnosis of “intestinal foreign body”, based on his upright abdominal plain film, he was referred to our hospital. The abdominal pain had been continuing for 2 d, with mild severity without any alleviation or aggravation. His physical examination revealed soft abdomen, no guarding and rebound tenderness, and normal bowel sound. However, tenderness was found at right lower quadrant on deep palpation. No abnormality was detected in rectal examination. Complete blood count and urine test were within normal limits. His upright abdominal plain film showed about 30-40 overt dense opacities in the colonic segments, with oval and well shaped contours, each approximately 1 cm × 1 cm in size (Figure 1). In addition to these multi-opacities, an image of a pin was detected in the region consistent with the right lower quadrant. In abdominal ultrasound, there were not any obvious abnormalities supporting the findings of the plain film. However, a minimal amount of smear-like fluid was present around the ileal segments in right lower quadrant. Low-dose computed abdominal tomography was applied without administering contrasting substance to see whether there is a foreign body which is unable to pass into the colon and poses the risk of obstruction, to be able to detect other foreign bodies which might not show any opacity, to evaluate the ileo-caecal valve better, and to better analyze the smear-like fluid shown by ultrasonography. In the lumen of colon, about 30-40 hyperdense images, suspicious of being pebbles, were detected (Figure 2). The multiplanar reconstructions and three-dimensional images combined with sectional screening revealed that all pebbles had passed completely into the colon and no foreign bodies had remained in the ileal segments (Figure 3). After computed abdominal tomography, rectal enema was applied to the patient and a few pebbles were passed out the body through defecation. He was managed conservatively and monitored with physical examination and abdominal plain film on follow-up in surgical out-patient clinic, until all the pebbles and pin were discharged within one week via defecation without any difficulty. 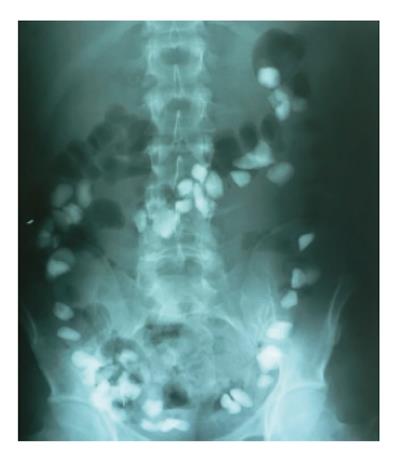 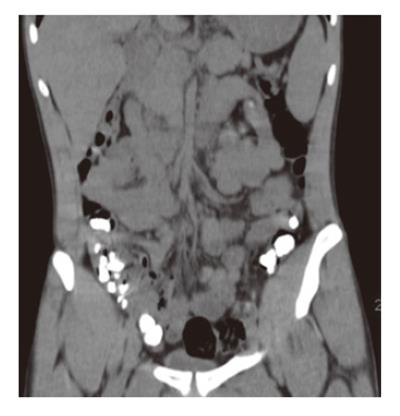 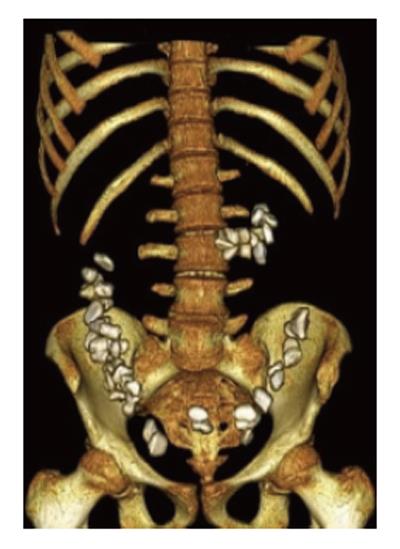 Figure 3 A multiplanar reconstruction and three-dimensional image combined with sectional screening showing all pebbles had passed completely into the colon and no foreign bodies were remained in the ileal segments.
DISCUSSION

Intestinal foreign body cases resulting from foreign body ingestion accidentally or due to a conversive reaction are seen less frequently in adulthood when compared to childhood. Types of the intestinal foreign bodies taken orally by adults differ from those taken by children. In literature, plastic pipe, metal pin, nail, screw, spoon, bamboo stick and paper clip have been reported in adults as gastrointestinal system foreign bodies[3-5]. Some case reports are available regarding Meckel’s diverticulum perforations caused by swallowed fish bone[6-8], foreign bodies[9-11], chicken bone[12] and alkaline battery[13]. In the relevant literature, Selivanov et al[14] published a series of 101 and Steven et al[15] a series of 75 foreign body ingestion cases. In addition, Losanoff et al[5] presented a series of 9 prisoners who swallowed metal parts shaped like a cross.

Orally ingested foreign bodies are the cases that are not seen frequently in emergency surgery policlinic. The basic approach is physical examination and imaging techniques. Patients considered not having acute abdominal syndrome after physical examinations are followed up with a serial upright abdominal plain film and physical examination. In case the foreign body cannot be visualized in conventional films, it should be kept in mind that the patient did not swallow the object or conventional techniques remained inadequate to visualize it. When the presence of other foreign bodies is suspected although one is observed on plain films, computed abdominal tomography can be considered as a proper alternative[16-20]. Plain film findings of our case were evaluated in accordance with literature. Abdominal ultrasonography was applied considering that there might be foreign bodies which cannot be seen on plain films. Pebbles and the pin detected on plain films could not be seen on ultrasonography. Then computed abdominal tomography was applied to the case, which revealed multiple opacities that were suspected of being pebbles with intracolonic localization.

Intestinal foreign body cases, regardless of being in adulthood or childhood, do not reveal any symptoms as long as the object does not cause obstruction. If they lead to any obstruction or perforation, the main symptom to emerge will be abdominal pain, as was found in our case. Data have shown that majority of the cases are normal adults who swallowed fish or chicken bones while eating or mentally retarded patients who swallowed foreign bodies unconsciously.

His physical examination revealed soft abdomen, no guarding and rebound tenderness, and normal bowel sound. However, tenderness was found at right lower quadrant on deep palpation. No acute abdominal symptom or a clinical condition requiring an emergency surgical intervention could not be obtained in the case. The swallowed foreign bodies were clearly seen on his upright abdominal plain film. Literature points out that metal and glass objects can be seen on plain films, but not wooden objects, so abdominal USG may be obtained when deemed necessary[21]. It will be very helpful to evaluate the abdomen through computed tomography in addition to plain films particularly in cases with psychiatric problems, suspicious of swallowing objects such as drugs, posing the risk of harming themselves and in those trying to conceal the truth, as seen in our case. Computed tomography and three-dimensional imaging were applied to the case in order to reveal other foreign bodies that might be present although they could not be monitored on plain films and to eliminate the foreign bodies that might remain in ileal segments and lead to ileo-caecal obstruction. Since there might be some other foreign bodies that cannot be detected by plain films, computed tomography and three-dimensional imaging are applied as the appropriate alternative for the detailed assessment of the intestinal lumen in suspected problematic cases and in the elimination of probable future complications.

While approaching to the intestinal foreign body cases, location of the foreign body has a great importance in terms of management. According to the localization and shape of the object, it is decided on whether an out-patient treatment or surgical intervention will be applied[17,20,21]. Although sharp objects pass through gastrointestinal tract without difficulty in 90% of the cases, they may also be removed using fiberoptic gastroscopy without waiting. Early endoscopic intervention, in general, may be required and applied for objects wider than 2 cm and longer than 6 cm, since their passage through pylorus and duodenum will become difficult. Once these foreign bodies pass beyond pylorus and ileo-caecal valve, they are easily removed out of the lumen[2]. Losanof et al[12] operated all cases since the foreign bodies have pointed and sharp edges. Our case was managed conservatively and monitored on out-patient policlinic follow-up, in the light of the literature. He was informed about the probable progress of his condition and suggested to be admitted to the clinic as soon as possible in case of acute abdominal pain and/or any other complaints.