METHODS: Blood samples were collected from patients visiting the Can Tho General Hospital for upper gastrointestinal endoscopy. DNA was isolated from whole blood, the repeated section was cut out using a restriction enzyme (PvuII) and the length of the allele fragments was determined by Southern blotting. H pylori infection was diagnosed by 14C urea breath test. For analysis, MUC6 allele fragment length was dichotomized as being either long (> 13.5 kbp) or short (≤ 13.5 kbp) and patients were classified according to genotype [long-long (LL), long-short (LS), short-short (SS)].

H pylori has the unique ability to colonize the human stomach. Infection with H pylori invariably leads to gastritis and in many instances to peptic ulcer disease[1]. Additionally, H pylori infection has been associated with gastric cancer[2]. It is a common infection throughout the world, with prevalence ranging from below 20% in developed countries to over 80% in developing countries. Some risk factors for H pylori infection have been identified, such as low socio-economic status or poor hygiene[3]. However, there is remarkable inter-individual variability in susceptibility to the infection that cannot be explained by differences in environmental factors.

Another factor that may be related to H pylori infection susceptibility is the composition of the mucus gel layer in the stomach, in which H pylori resides. This layer protects the underlying epithelium from acid, proteases, mechanical trauma, and pathogenic micro-organisms and its main constituents are high molecular weight glycoproteins named mucins. These mucins consist of a polypeptide backbone with O-linked oligosaccharide side chains, which largely determine the properties of the mucins[4]. Interestingly, there is substantial inter-individual variation in the number of these side chains. This is caused by a variable number tandem repeat (VNTR) polymorphism in the genes encoding for the mucins. VNTRs consist of repeated DNA sequences and the number of repeats is highly variable. The resulting repeated amino acid sequences are located in the central part of the mucin polypeptide backbone, to which the oligosaccharide side chains are attached[5]. Therefore, this polymorphism leads to the production of mucin polypeptides that substantially differ in both length and glycosylation[6,7]. Thus, this VNTR polymorphism may affect the protective properties of the mucins and consequently the susceptibility to H pylori infection.

Normal gastric mucosa is characterized by the expression of mucins MUC1, MUC5AC and MUC6. MUC1 is of the membrane-bound type, whereas MUC5AC and MUC6 are of the secreted, gel-forming type[8]. MUC6 and MUC1 show extensive VNTR variation, MUC5AC only moderate[6,9]. Furthermore, the length of the repeated sequence differs: a single MUC6 tandem repeat sequence consists of 507 base pairs whereas single MUC1 and MUC5AC tandem repeat sequences consist of only 60 and 24 base pairs, respectively[6]. Therefore, the VNTR polymorphism has the most profound impact on allele length and protein structure of MUC6.

Despite the significant structural consequences of these VNTR polymorphisms, few studies investigated their pathophysiological consequences. In a study comparing gastric cancer patients with healthy blood donors, shorter VNTR sections were associated with gastric cancer for MUC6[10] and MUC1[11]. This effect may be mediated by an altered susceptibility to H pylori infection which is an important factor in gastric carcinogenesis, since Vinall et al[9] showed that short VNTR sections were associated with H pylori infection for MUC1. However, there are no data available regarding the relationship between H pylori infection and VNTR polymorphism in MUC6, which is abundant in the stomach and has the most extensive VNTR variation[12].

Therefore, the aim of this study was to investigate the hypothesis that susceptibility to H pylori infection is related to MUC6 VNTR length. We studied a sample of 160 patients referred for upper gastrointestinal endoscopy and found that patients with short MUC6 allele fragments have a significantly higher risk of being infected with H pylori, which suggests that mucin 6 protein length modifies susceptibility to H pylori.

From September to December 2003, all patients with upper gastrointestinal symptoms visiting the Gastroenterology Outpatient Clinic of the Can Tho General Hospital for upper gastrointestinal endoscopy were asked to participate in this study. Patients who had not been treated for H pylori infection in the past and who gave written informed consent were included in the study. At baseline, data regarding age, gender, smoking habits and alcohol consumption were registered.

All patients had a 14C urea breath test (HeliprobeTM, Noster system AB, Stockholm, Sweden). Patients were not allowed to use proton pump inhibitors/H2-receptor antagonists or antibiotics during the two weeks preceding the breath testing. After an overnight fast patients took a HeliCapTM capsule (containing 1 μCi of 14C urea) with 50 mL of water. Ten minutes later, a breath sample was collected (BreathCardTM) and analyzed during 4 min. Measuring more than 50 counts was regarded as proof of H pylori infection, measuring fewer than 25 counts was regarded as proof of absence of H pylori infection[13].

The primary outcome of this study was the presence or absence of H pylori infection. For analysis, MUC6 allele fragment length was dichotomized as being either short (≤ 13.5 kb) or long (> 13.5 kb) and patients were classified according to genotype [long-long (LL), long-short (LS), short-short (SS)]. Baseline characteristics for H pylori positive and negative patients were compared. MUC6 genotype and baseline characteristics were related to H pylori infection by means of unadjusted and adjusted logistic regression analyses, using the SAS® statistical software package (SAS Institute Inc., USA). Statistical significance was defined as a P < 0.05. Missing values were excluded from analysis.

Using the restriction enzyme PvuII, a clear length polymorphism was detected. Minimum fragment length difference was 0.5 kb, reflecting the length of a single MUC6 tandem repeat that consists of 507 base pairs. MUC6 was found to be highly polymorphic with PvuII-restricted fragment lengths ranging from 7 to 19 kb [mean 13.8 kb (SD: 2)] (Figure 1). 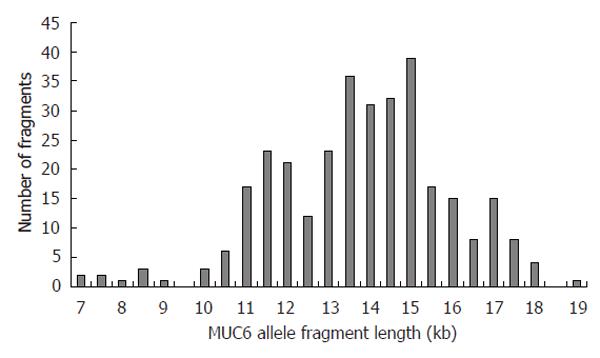 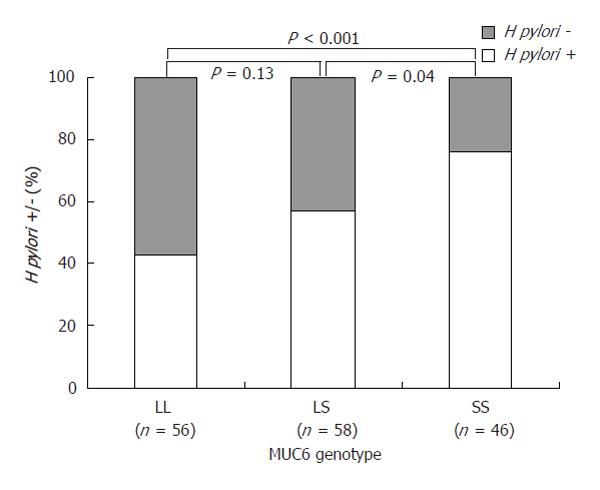 Additionally, Table 2 shows that of the other patient characteristics measured, only age was associated with

H pylori infection, and that the influence of MUC6 genotype remained virtually unchanged after adjusting for age group, gender, smoking and alcohol consumption.

Few other studies investigated the MUC6 VNTR polymorphism. Vinall et al[6] found 11 different allele fragment lengths for MUC6, ranging from 8 to 13.5 kb. This degree of variation is considerably lower than in our study. It is unlikely that this difference in VNTR length variation is inherent to the Southern blotting technique, as we used the same restriction enzyme. However, the aforementioned study used the Centre d’Étude du Polymorphisme Humain (CEPH) series of families in France and these may be much more homogeneous than our study population.

The relationship between H pylori infection and mucin VNTR length has been investigated for another mucin gene, MUC1, and the results were similar to ours. Like other mucins, MUC1 lubricates epithelial structures and constitutes a barrier against acid, proteases and pathogenic organisms. Vinall et al[9] showed that short MUC1 alleles were associated with H pylori-induced gastritis. Therefore, MUC1 and MUC6, although arising from different families of mucins, may be involved in the same mechanism regarding H pylori infection[14].

However, other researchers claimed that MUC5AC, and not MUC6, is important in H pylori infection: Van den Brink et al[15] stated that H pylori co-localised with MUC5AC but not with MUC6, and Van de Bovenkamp et al[16] stated that MUC5AC, and not MUC6, was the most important receptor for H pylori. However, in the study by Van den Brink et al, antibodies recognizing the MUC6 precursor rather than mature MUC6 were used. Therefore, it seems plausible that the precursor MUC6 is only found in neck and gland cells, where MUC6 is synthesized. However, the mature MUC6, which is secreted, may be found throughout a much larger area. In fact, Ho et al[17] recently confirmed that the mucin within the glands consisted entirely of MUC6, but they also showed that, although the mucus layer on the gastric surface consisted primarily of MUC5AC, layers of MUC6 were interspersed between the layers of MUC5AC.

Regarding the receptor function of the mucins, MUC5AC is the primary source of Lewis B (Leb), a terminal carbohydrate chain that acts as a ligand for the bacterial adhesion molecule BabA[16,18]. However, although other receptor sites may be present on MUC6[19], mucins may be involved in many other processes besides bacterial binding.

In fact, recently, Kawakubo et al[20] showed that secretions from the glands (consisting of MUC6) may have an antibiotic effect on H pylori, while secretions from the superficial epithelium (primarily consisting of MUC5AC) may have a pro-biotic effect, thereby limiting H pylori infection to the superficial epithelium and protecting the deeper layers of the gastric mucosa. This is consistent with the geographical distribution of H pylori described by Van den Brink et al[15]. The antibiotic effect was mediated by terminal α-1, 4-linked N-acetylglucosamine (α-1,4-GlcNAc) residues, which are present on the variable region of MUC6. Furthermore, the presentation of multiple terminal α-1,4-GlcNAc residues as a cluster may be important for achieving optimal activity. This may explain our finding that shorter MUC6 molecules, which have fewer α-1,4-GlcNAc residues and therefore lower antimicrobial activity, are associated with H pylori infection. More research is necessary to further elucidate the functions of the mucins.

The authors would like to thank Saskia Bergevoet for performing the Southern Blots and the American Gastroenterology Association for the opportunity to present this paper at the Digestive Disease Week (May 2005, Chicago).