AIM: To study the relationship between the patterns of postprandial peristalsis and transduodenal bolus transport in healthy subjects.

METHODS: Synchronous recording of chyme transport and peristaltic activity was performed during the fasting state and after administration of a test meal using a special catheter device with cascade configuration of impedance electrodes and solid-state pressure transducers. The catheter was placed into the duodenum, where the first channel was located in the first part of the duodenum and the last channel at the duodenojejunal junction. After identification of previously defined chyme transport patterns the associated peristaltic patterns were analyzed.

CONCLUSION: Combined impedancometry and manometry improves the analysis of the peristaltic patterns that are associated with postprandial transduodenal chyme transport. Postprandial transduodenal bolus transport is regulated by propulsive peristaltic patterns, which are frequently complex but well organized. This finding should be taken into consideration in the analysis of intestinal motility studies.

The spatial and temporal organization of gastrointestinal contraction waves seems to be a more important determinant of the flow of luminal contents than their number and amplitude[1,2]. Therefore, significant advances in understanding intestinal motility disorders could be made by analysis of bolus movement together with peristaltic activity within the gastrointestinal lumen. With manometry alone small intestinal motility patterns can be obtained[3]. However, up to date there are limited observations on the relationship between intestinal chyme transport and peristaltic activity in humans because fluoroscopic studies are limited due to radiation exposure.

In previous studies we have characterized postprandial duodenal chyme transport patterns[5,6]. Recently, we developed the technique of combined impedancometry and manometry (CIM)[12] and applied it for motility testing in healthy subjects and reflux patients[13-15]. In the present study we used this approach in order to systematically study the relationship between intestinal chyme transport patterns and peristaltic patterns and to obtain detailed information about peristaltic mechanisms regulating postprandial transduodenal bolus transport.

Ten subjects (7 males and 3 females, mean age 34 years, range 26-36 years) were studied after written informed consent. All healthy volunteers were recruited from the medical staff. They took no medication and had no history of gastrointestinal disease. The study protocol was approved by the local ethical committee of Aachen University.

Combined impedance and pressure recording: A custom-made combined catheter consisting of 11 impedance segments (each 2 cm long) and 4 semicon-ductor pressure transducers was used (prototype developed by Dr. Nguyen RWTH-Aachen, Ref. 13). The pressure transducers were located between the impedance channels 1-2, 4-5, 7-8 and 10-11 (intertransducer distance 6 cm) (Figure 1). The cascade configuration of the impedance electrodes allows continuous monitoring of chyme movement and is particularly suitable for analysis of chyme transport patterns[5,6]. 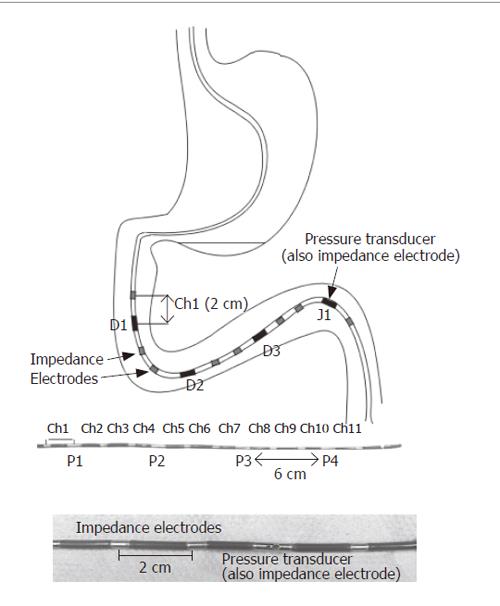 Synchronous recording of chyme transport and peristaltic activity was started after a resting period of at least 20 min following catheter placement. After identification of a phase 3 migrating motor complex, a standard test meal consisting of 500 g of commercially available yogurt with small pieces of fruit (450 kcal, 400 mL, 5.5 g fat, 12.5 g protein, 75 g carbohydrate) was administered, and data were collected for a further 2 h.

Impedance and manometry tracings were reconstructed on screen and the patterns were consecutively analyzed. Since we studied transduodenal bolus transport, only impedance signals related to a complete chyme transport over at least 6 cm beginning at the first impedance channel were included and analyzed as previously described as a bolus transport event (BTE)[5,6]. This definition was used to exclude transpyloric movement of gastric contents into the duodenum bulb without initiation of duodenal peristaltsis. BTE were classified according to (a) site of onset (proximal vs distal), (b) propulsion direction (propulsive vs retropulsive), (c) propagation distance (short-spanned ≤ 8 channels or ≤ 16 cm vs long-spanned > 8 channels or > 16 cm), (d) number of components (simple = one component vs complex = multiple components). Thus the transport patterns were: (a) short-spanned propulsive, (b) retrograde, (c) long-spanned propulsive, and (d) complex propulsive[5,6,8]. Of note, our previous validation study[6] demonstrated that long-spanned BTE are associated with a significant drop of intraluminal pH and change of electrical conductivity, thus indicating real chyme movement originating from the stomach. 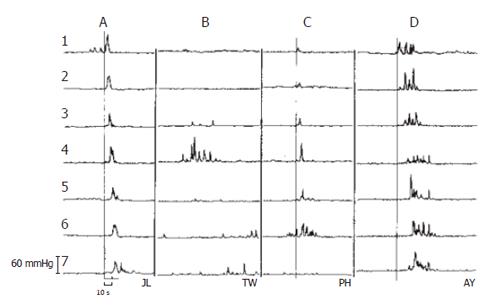 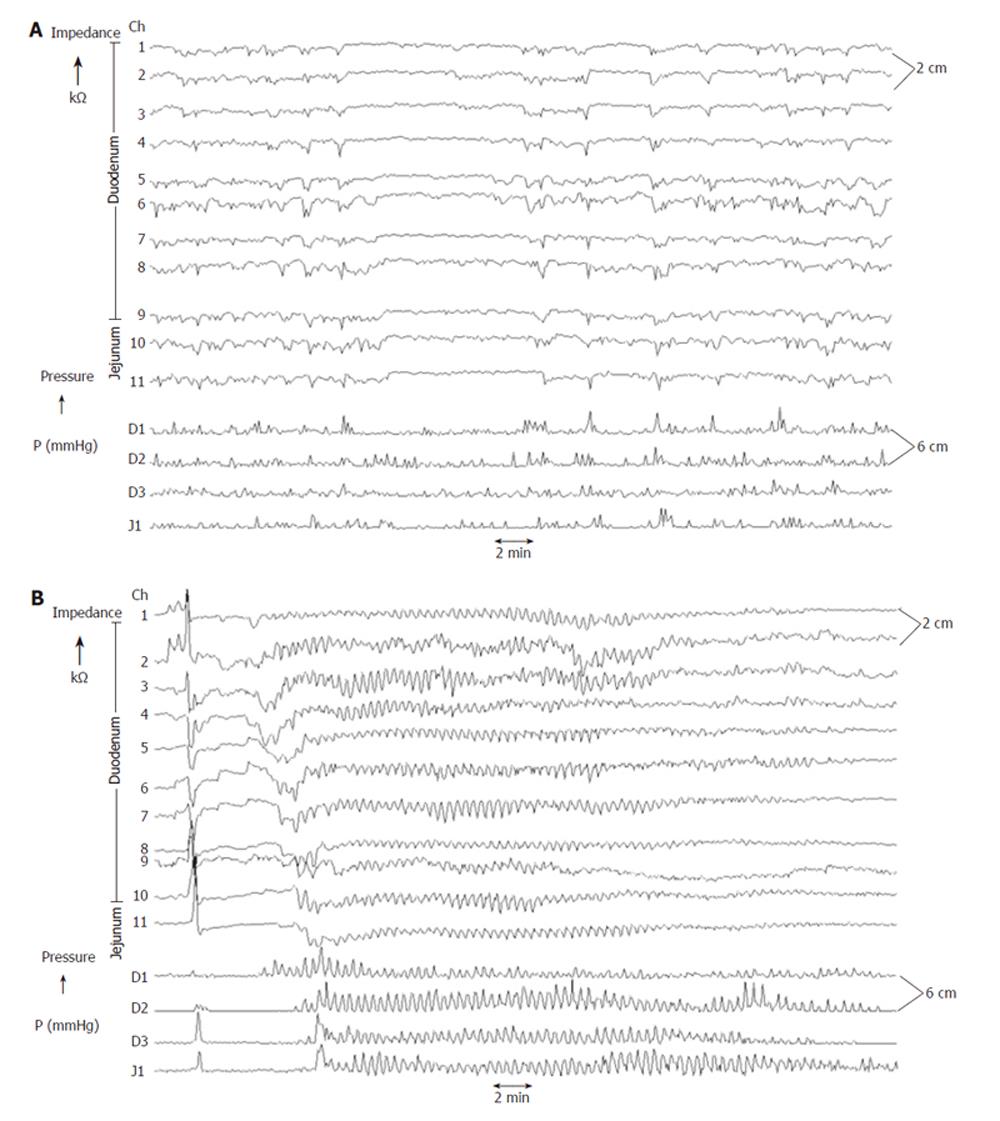 The postprandial manometry tracings showed irregular peristaltic activity, which is difficult to analyse (Figure 4, upper panel). However, with combined impedance and manometry the relationship between transduodenal bolus transport event and associated peristaltic activity could be investigated in more detail (Figure 4, middle panel). Plotting the tracings at high resolution, the patterns of chyme transport as recorded by impedance and of peristalsis as recorded by manometry were analysed systematically (Figure 4, lower panel). 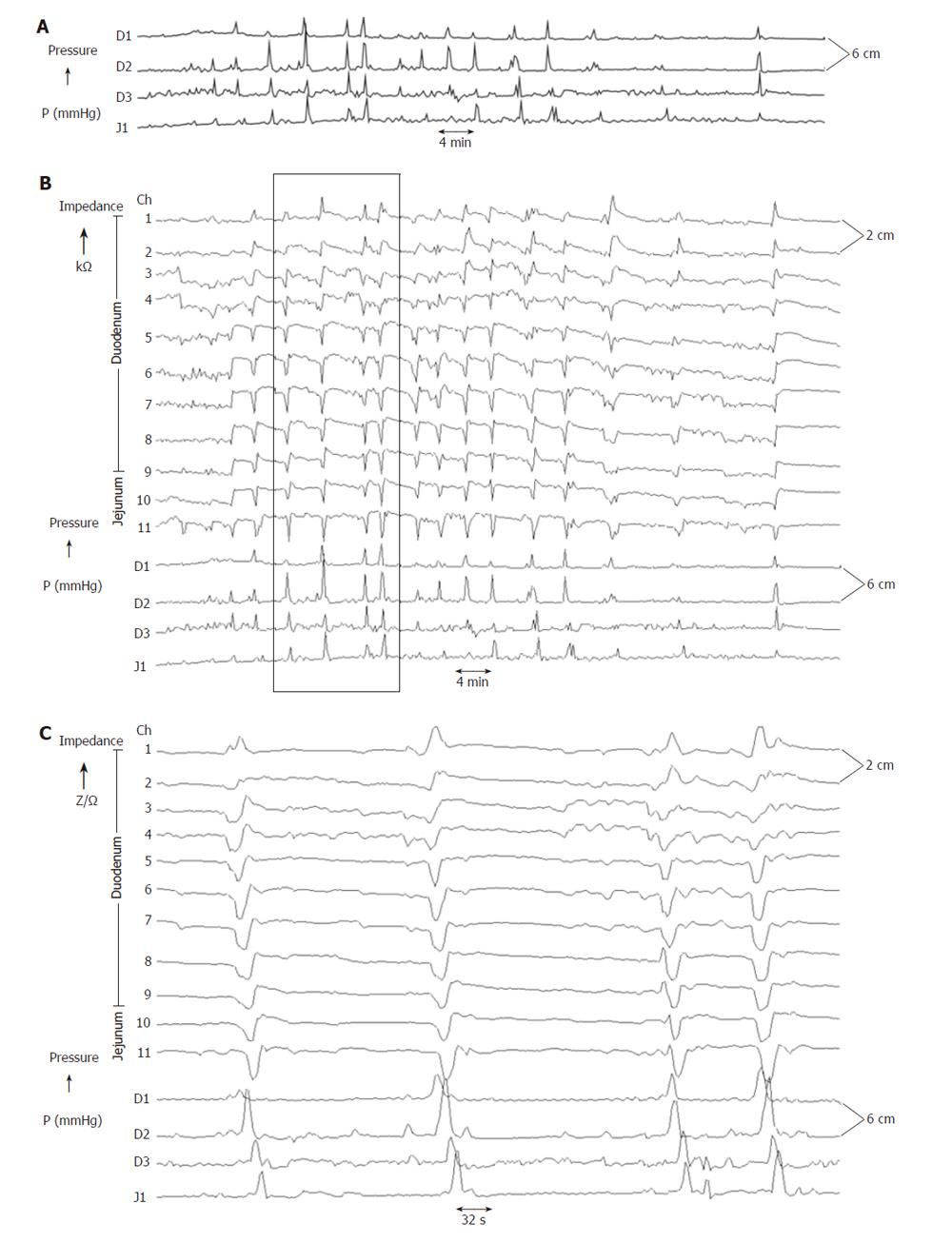 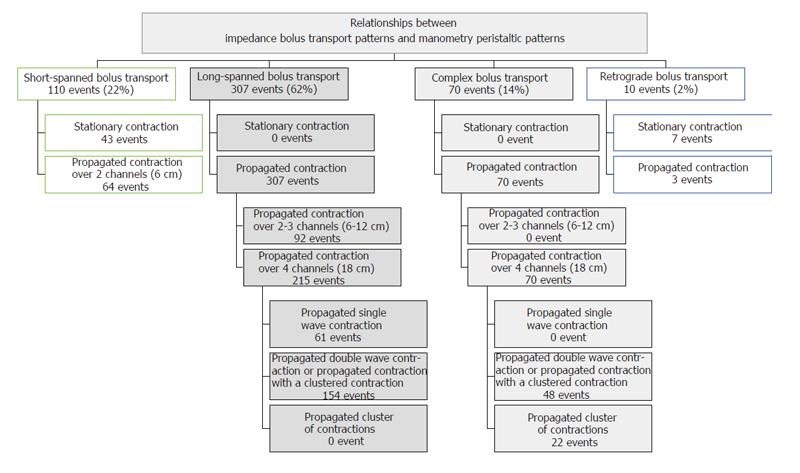 Examples of the bolus transport events and their associated peristaltic patterns are shown in Figures 6-8. 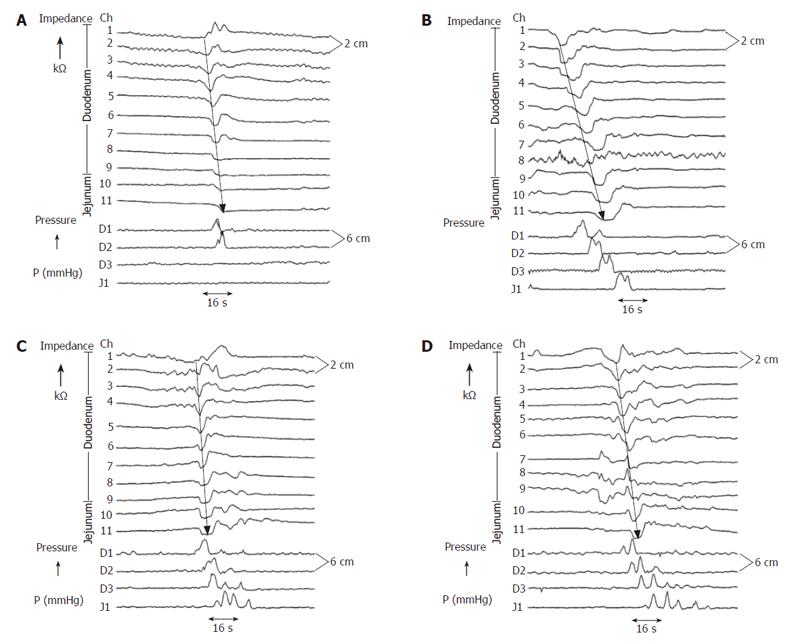 Only few studies in man have directly analysed the spatial and temporal relationship between the patterns of chyme flow and patterns of peristaltic contraction waves in the duodenum, particularly during the postprandial state and in details. This study was performed to directly address this issue using the newly developed and validated technology of combined impedance and manometry for motility testing[12-15]. The daisy-chained configuration of the impedance electrodes in the present system differ significantly from other systems[17-19], where the impedance electrode pairs are located far from each other. As shown in previous impedance studies[5,6] this catheter configuration offers a high spatial resolution for detailed monitoring of bolus transport patterns. The incorporated solid state pressure transducers allow the concurrent analysis of the corresponding contractile events.

As shown in Figure 3, the phase 3 complex is recorded identically by both techniques, showing the well-known characteristics of the migrating motor complex, similar to recent findings by Imam et al[17]. During the postprandial phase, chyme transport and associated peristaltic activity can be accurately monitored, and thus a large number of bolus transport event (BTE) was obtained for detailed analysis.

Considering the manometry tracings alone, it has been shown to be difficult to characterize contraction waves to be stationary or propagated[20]. As shown in Figure 4 this problem can be overcome by the combined technique as shown in the recent study. After a bolus transport event (BTE) had been identified with impedance in the present study, the organization of the associated contraction waves could be analyzed. We did not include contraction waves that occurred between the bolus transport events, as compared to previous studies[1,3,20], which analyzed the overall motility activity. Therefore, the results are not comparable. As only impedance events representing a bolus transport over at least 6 cm were analysed, the present results provide data about the postprandial organization of peristaltic activity in association with a transduodenal bolus transport. Transpyloric chyme movement was not included in the present studies.

A major finding of the present study is the close relationship between transduodenal bolus transport patterns and peristaltic contraction patterns. The results showed that long-spanned chyme transport patterns are predominantly associated with propagated peristaltic patterns, whereas short-spanned chyme transport patterns are frequently related to stationary contractions or propagated contractions over short distance (6 cm). The data are consistent with results of a recent study[17] showing that impedance corresponds better with fluoroscopic flows than manometry and that recording of pressure events can underestimate even flow events of substantial length. However, the quantitative data of this study are not comparable to ours because there are important differences with respect to study design and analysis algorithm: (a) in this study the impedance segments were spaced 5 cm apart from each other as compared to the cascade configuration in our study, thus, the recording of impedance patterns differs substantially; (b) all impedance events with a drop of 12% or more below baseline, even if detected in only one impedance segment (spread distance < 5 cm), were included as compared to impedance signals of a complete bolus passage over 6 cm in our study. Since an impedance drop only indicates arrival of a bolus front but not always a complete bolus passage, it might represent transpyloric chyme movement into the proximal duodenum, which is detected at the first duodenal channel as compared to a transduodenal bolus transport over at least 6 cm.

The answers about the question regarding how complex peristaltic sequences can be regenerated during a bolus transport can be sought in results of electrophysiological studies. Intestinal motility is considered to be controlled by interaction between myogenic, neural and humoral factors[34-35]. In recent studies several motility patterns have been characterized as peristaltic or pendular, stationary or propagating, or twitch or segmental[36-37]. Furthermore, several electrical signals have been shown to be associated with different types of contractions including slow waves, spikes, or bursts[36-38]. Therefore, peristalsis with associated propagated peristaltic waves should not be regarded as a simplex reflex, bur rather as a co-ordinated locomotor pattern, which can be induced either by fluid distension, local stretch, or mucosal stroking[36]. Careful examination of the spatial and temporal relationship between spontaneous slow waves and peristaltic waves showed that they seem to constitute two separate electrical events that may drive two different mechanisms of contractions[39]. Slow waves are not in rhythm with peristaltic waves and they may occur in different groupings and patterns. These waves may travel in the same or in opposite directions from each other and may propagate in the oral or caudal direction, and therefore, may modulate each other. Similarly, slow waves and spikes seem to be propagated by different mechanisms through different cell networks[32]. Thus, the spatial and temporal characteristics of contraction in the small intestine seem to be determined not only by the direction of the slow wave but also whether or not spikes are generated after these slow waves[32,40].

There are 2 limitations of the recent studies, which should be evaluated in further studies: (a) since the composition of the test meals significantly affect small intestine motility, it remains to be determined, if the recent bolus transport and peristaltic patterns will be the same by using different test meals; (b) since the intertransducer distance significantly affect the recognition of propagated pressure waves, it remains to be determined, if more closely spaced recording points with 1-2 cm apart may provide more accurate data.

In summary, combined impedancometry and manometry in human duodenum provides detailed data about the relationship between the organization of contraction waves and the patterns of chyme flow during the postprandial state. This technique improves the analysis of intestinal motility. Several postprandial peristaltic patterns associated with transduodenal bolus transport have been identified showing that cluster of contractions constitutes an integral part of the peristaltic sequence associated with transduodenal bolus transport. The results provide new insights into the peristaltic mechanisms that are associated with transduodenal chyme transport and maintain the physiological function of the duodenum. The present results clearly indicate that comprehensive motility testing in the small intestine, particularly during the postprandial state, should be performed using the combined technique. The present data will serve as basis findings forwarding clarifying small intestinal motor dysfunction.

Preliminary data were presented in part at the Digestive Disease Week, May 2004, New Orleans. Dr. Domingues is a Fellowship holder of CNPq-Brazil.