AIM: To explore the mechanism by which H pylori causes activation of gastric epithelial cells.

METHODS: A VacA (+) and CagA (+) standard H pylori line NCTC 11637 and a human gastric adenocarcinoma derived gastric epithelial cell line BGC-823 were applied in the study. MTT assay and 3H-TdR incorporation test were used to detect the proliferation of BGC-823 cells and Western blotting was used to detect the activity and existence of related proteins.

H pylori is an important pathogen associated with gastritis and peptic ulcers[1]. It has also been defined as a carcinogen[2]. The mechanisms of pathogenic and carcinogenic effects of H pylori infection are under intensive investigation. Research data suggest that H pylori might stimulate the proliferation of gastric epithelial cells both in vitro and in vivo[3-5]. This effect of H pylori has an important pathogenic significance because increased cell proliferation may elevate the gastric mutation rate and is a predisposing factor for neoplasia. The mechanism, especially the intracellular signal transduction pathway associated with the stimulating effect of H pylori on the proliferation of gastric epithelial cells, is under extensive study.

Protein kinases, which regulate the protein phospho-rylation, are considered to play the most important role in regulating protein function and cell activity. Mitogen-activated protein kinase (also known as MAP Kinase) is a crucial member of the protein kinase family. So far, four MAP Kinase cascades have been characterized in mammalian cells. Among them, extracellular signal-regulated protein kinase (ERK) cascade is most well characterized. The activation of signal transduction pathways by growth factors, hormones and neurotransmitters is mediated through ERK cascade[6,7]. It is the basic signal transduction pathway regulating cell proliferation and differentiation. Recent research data indicate that activation of ERK cascade is involved in

H pylori- induced proliferation of gastric epithelial cells[8-10]. However, more details of H pylori-induced activation of ERK cascade are needed to be explored.

Human gastric cancer cell line BGC-823 was kept in DMEM containing 100 mL/L serum and incubated in 5% CO2 at 37°C. The medium was changed every second day and the cells were sub-cultured at 80%-90%

Healthy H pylori was scraped down from horse serum agar plate and transferred into Brucella broth containing 100 mL/L serum. The bacterial suspension was incubated in micro-oxygen environment (80% N2, 15% CO2, 5% O2) at 37°C for 24 h with continuous shaking. The growth of H pylori was confirmed by Gram staining before harvest. H pylori cells were precipitated by centrifugation at 5000 r/min for 15 min at 4°C and washed with PBS. The bacteria were re-suspended in serum free cell culture medium (DMEM) and sonicated (100 W, 15 s × 6, at 30 s interval). The breakdown of the bacteria was confirmed by microscopy. The suspension was centrifuged at 10 000 r/min for 30 min at 4°C. The supernatant (H pylori extract) was adjusted to protein concentration of 1 g/L and kept at -20°C until use.

The protein sample was loaded with 30 μg protein per lane on SDS-PAGE gel. After electrophoresis, the proteins on the gel were transferred onto nitrocellulose (NC) membrane as described previously. The NC membrane was blocked with 50 g/L milk in TBS-T for 1 h at room temperature (RT), incubated with first antibody for 2 h and with secondary antibody for 50 min at RT and finally washed three times after each incubation. ECL chemoluminescence reagent was used to show the positive bands on the membrane.

A total of 1 × 104 trypsin-dispersed BGC-823 cells in 0.1 mL culture medium were seeded into each well of the 96-well plates and cultured for 24 h. Then, the cells were incubated with medium alone or with medium plus H pylori extract at different concentrations. After 24 h of further incubation, 10 μL of MTT (6 g/L, Sigma) was added to each well and the incubation was continued for 4 h at 37°C. Finally, the culture medium was removed and 200 μL of dimethylsulphoxide (DMSO) was added to each well. The absorbance was determined with an ELISA reader at 570 nm. The “change percentage” of the absorbency (A) value of the cells treated with H pylori extract compared with A value of the cells without treatment was calculated as:

The cells were cultured in the same way as described in MTT assay. When the culture medium was changed and H pylori extract was added, 0.2 μCi of 3H-TdR was also added into each well. After further incubation for 24 h, the medium was discarded and the cells were trypsin-dispersed and collected onto a membrane. The membrane was heated dry at 65°C and put into a plastic vial containing 6 mL of scintillation liquid. The count per minute (CPM) was calculated with a Beckman scintillation counter. The “change percentage” of CPM of the cells treated with H pylori extract compared with CPM of the cells not treated with H pylori extract was calculated as:

The results of MTT assay, 3H-TdR incorporation test and reporter gene assay data were expressed as means ± SD. The significance of the difference between control group and experimental group was evaluated by Student’s t-test. 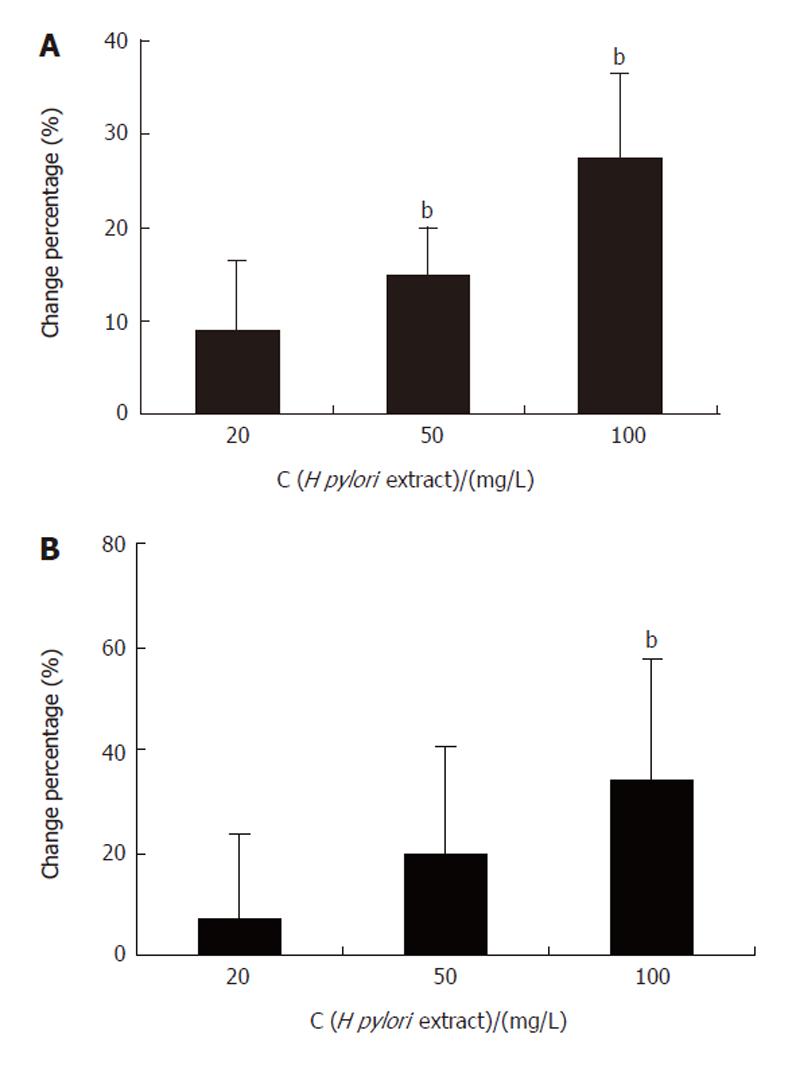 The separated protein samples from cells incubated with 50 mg/L H pylori extract for different periods of time were first probed with antibody against phosphorylated ERK to analyze the activity of ERK and re-probed with anti-ERK2 antibody to show the protein content of this kinase. The results showed that in serum-starved cells, the activity level of ERK was very low. During incubation with H pylori extract, the activity of ERK increased obviously within 20 min and stayed at a high level (about 5 times of control) for more than 8 h ( Figure 2). 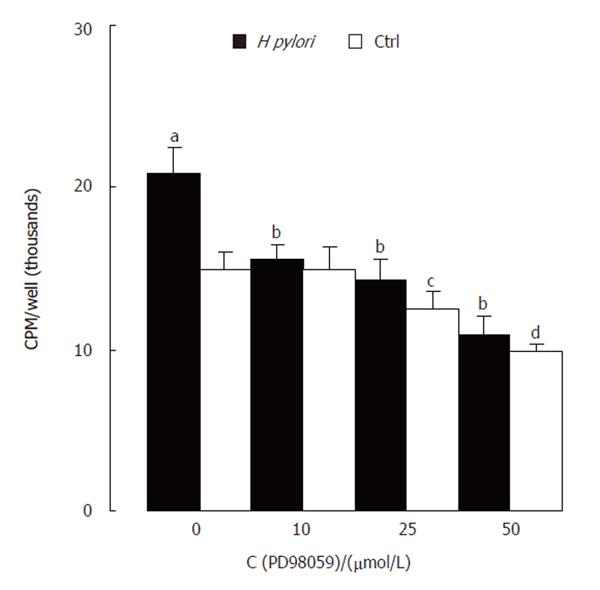 Genistein is an inhibitor of tyrosine kinase. Western blotting with antibody against phosphorylated ERK showed that treating the cells with genistein inhibited the ERK activation induced by H pylori extract (Figure 5). 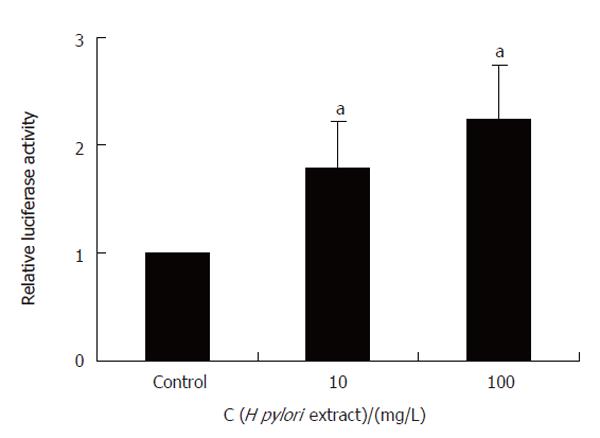 Gastric H pylori infection is the most common infection in humans. It is responsible for virtually all cases of gastritis and most cases of peptic ulcers[1]. Moreover,

H pylori is defined as a group 1 carcinogen in humans by International Agency for Research on Cancer, a working party of WHO[2]. The conclusion is, however, mainly based on the epidemiological data and clinical investigations. Even though laboratory data on carcinogenesis of H pylori are accumulating during recent years[11-13], more efforts are still needed to elucidate the mechanism of H pylori-induced malignant diseases. Gastric carcinoma develops through a sequence of events from normal mucosa to gastric carcinoma[14]. H pylori might be closely associated with this process. Several mechanisms have been proposed by which H pylori infection might lead to predisposition for gastric cancer[15]. One explanation is that H pylori- associated chronic inflammation may increase the rate of cell turnover in gastric mucosa. Rapidly replicating DNA is more susceptible to damage. Alongside increased reactive oxygen species and decreased ascorbic acid content during inflammatory reactions, H pylori -induced proliferation may be the major factor for gastric dysplasia and gastric cancer[16,17]. In H pylori hosts with gastritis, increased proliferation of gastric epithelial cells has been confirmed[3,4]. Laboratory data have also shown that H pylori might directly stimulate proliferation of gastric epithelial cells[5,10,11]. The former reveals an increased cell turnover rate in H pylori host and the latter suggests that increased proliferation of gastric epithelial cells might be a direct effect of H pylori.

Probing separated proteins with anti-phosphorylated ERK antibody and re-probing them with anti-ERK2 antibody provide a sensitive way to detect ERK activity[18]. With this method, our study showed that during incubation with H pylori extract, the activity of ERK increased obviously in serum-starved cells and the activation of ERK was a sustained event. This is significant because sustained activation of ERK appears to be required for many cells to pass the gastrointestinal restriction point to enter S phase, in which cellular DNA is replicated[19,20]. MTT assay and 3H-TdR-incorporation test confirmed the stimulating effect of H pylori extract on cell proliferation in our study. Since ERK-mediated cascade is the basic signal transduction pathway regulating cell proliferation, this pathway can mediate proliferation-stimulating effects of

ERK is in the middle of the signal transduction pathway. Currently, it is believed that ERK may be activated through several pathways[21]. One is the receptor tyrosine kinase-Ras-MEK pathway. Growth factor ligand binds to membrane receptor and causes tyrosine-phosphorylation of the receptor. Consequential action of Ras and then Raf, which are components of the cascade, causes the activation of MEK (also known as MAP kinase), a direct upstream regulator of ERK[22]. PD98059 is a specific inhibitor of MEK[23]. Our results showed that PD98059 could block both ERK activity-stimulating and proliferation-stimulating effects of H pylori extract. Ras activity was not investigated in this experiment. However, we used tyrosine kinase inhibitor genistein to explore the possible involvement of tyrosine kinase in H pylori extract-induced signaling. The results showed that genistein inhibited H pylori extract-induced activation of ERK. Then, we used antibody against pan-tyrosine phosphorylation to detect tyrosine phosphorylation in both whole cell lysate and membrane protein from the cells. The results showed that in samples from the cells treated with H pylori extract, there was obvious tyrosine phosphorylation of a membrane protein with molecular size around 97.4 kDa, suggesting that it is very likely that H pylori extract activates ERK through receptor tyrosine kinase-Ras-MEK pathway.

As to the down-stream events of ERK activation, it was reported that some ERK activated by MEK can translocate to the nuclei and phosphorylate at least two transcription factors, c-Myc and Elk-1[24,25]. The phosphorylated factors may lead to increased production of c-Fos mRNA and finally lead to cell activation[26]. Mitsuno et al[27] reported that co-culturing human gastric cancer cells with Cag-positive H pylori strains can activate c-fos gene through SRE. Our results showed that H pylori extract stimulated SRE-dependent gene transcription and increased the expression of c-Fos protein, indicating that the signaling process behind activation of ERK by H pylori can derive biological elements.

Several methods, including co-culture of live H pylori with target cells, use of water extract and sonication extract to stimulate target cells, have been used to study the effect of biologically active components of H pylori on the activity of target cells. For example, during co-culture, H pylori may secrete active factors or act on the target cells through type IV secretion system[28], water extracting can get the surface component of the bacteria[29], and sonication extracting can efficiently release active components from the body of bacterial cells[30,31]. In this experiment, sonication of H pylori extract showed that soluble component from the bacteria activated the MAPK cascade of gastric cells. Further work is needed to identify the molecular features of the component in our laboratory.

H pylori contribute to the tumorigenesis effect of the bacteria.

We sincerely thank Professor Renate B Pilz in University of California, USA, for her kind gift of DNA constructs.