A 61 year old man with cirrhosis and hepatocellular carcinoma developed on the background of chronic hepatitis B was admitted because of acute and gradually intensified right thigh pain and swelling, which, within a few hours, was expanded to his right foot. The patient, due to ascites refractory to diuretics, was almost weekly subjected to large volume paracentesis of ascitic fluid for the last six months; meanwhile he has developed a left inguinal, a right femoral and an umbilical hernia. It should be noted that 48 h before admission, the patient was referred to the emergency room because of dyspnoea and 5 L of ascitic fluid were removed.

Physical examination was notable of tense ascites and his right lower extremity was profoundly more edematous (thigh, calf and foot) compared to his left leg (Figure 1), without signs of inflammation. Inguinal lymph nodes were not enlarged, Homan’s sign was absent, and peripheral arteries were palpable. There was also a left inguinal hernia and an umbilical hernia containing fluid in the sac, while there was no edema in the scrotum. 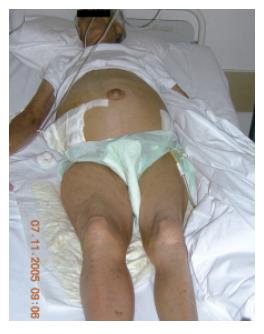 Figure 1 Significant edema of the right leg without signs of inflammation in our cirrhotic patient with tense ascites.

The patient was initially subjected to duplex ultrasono-graphy of his right leg, which turned negative for deep venous thrombosis. Subsequently, a CT scan of the right thigh and abdomen was performed, revealing an enormous fluid collection within the peritoneal cavity (Figure 2A) and a notable fluid collection within the lateral aspect of the right thigh (Figure 2C). The fluid in the right thigh exhibited approximately the same density with ascitic fluid (Figure 2A and C). No masses were detected in the pelvis. In addition, fluid was also seen in the left inguinal canal, but not in the scrotum, while no hernia was seen in the right femoral ring (Figure 2B). What could be the etiology of the patient’s right lower extremity edema 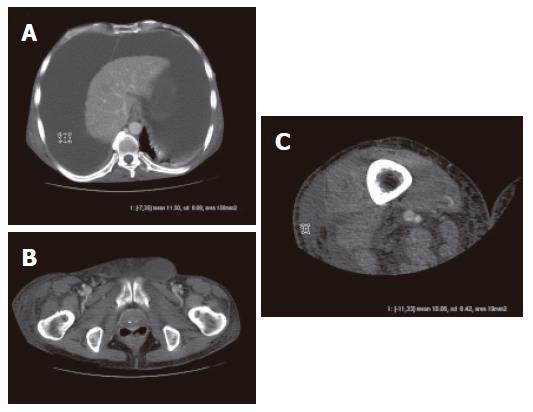 According to the diagnostic evaluation performed, the possibility of deep venous thrombosis of the right leg was practically excluded based on negative duplex, increased international normalized ratio (INR) (2.2) and low platelet count (70 000/mm3) that our patient exhibited in the text of his cirrhosis. Also any mechanical reasons that could induce unilateral venous or lymphatic stasis were ruled out. However, according to the CT scan findings, it seemed that the patient’s lower extremity edema was caused by accumulation of ascitic fluid, which somehow passed from the peritoneal cavity to the right thigh. Interestingly, the known right femoral hernia was detected neither by physical examination, nor by CT scan, tempting us to speculate that drainage of fluid contained within the femoral hernial sac to the thigh might have occurred.

Asking in more detail the patient’s history we were informed that in his prior admission to the emergency room (48 h ago), he was subjected to right femoral vein puncture for blood sampling. A potential mechanism of ascitic fluid accumulation in the right thigh could be the injury of the right femoral hernial sac during femoral vein puncture. The femoral hernial sac and its content pass through the femoral ring and are generally localized between the external femoral vein and Gimbernat’s lacunar ligament medially. These hernias, having penetrated Scarpa’s triangle, through stretching of the cribrate lamina, are visible subcutaneously in the thigh. Reasonably, perforation of the femoral hernial sac would permit the drainage of ascitic fluid to the subcutaneous tissue of the right thigh, forced by the high intraabdominal pressure, whereas the scrotum would remain unaffected (unlike the case of an inguinal hernia perforation). The patient was subjected to repeated large volume paracentesis and along with ascites improvement his right leg edema was significantly decreased.

This case presents a rare complication of femoral vein puncture in a patient with tense ascites, which raised diagnostic dilemmas and led to expensive diagnostic evaluation. Clinicians handling cirrhotic patients should be aware of this potential complication and perform femoral vein or artery puncture with caution or ideally under scan control in case of coexistence of ascites and femoral or inguinal hernias.