Necrotizing fasciitis is a devastating soft tissue infection affecting fascias and subcutaneous soft tissues. Literature reviews have identified several related risk factors, including malignancy, alcoholism, malnutrition, diabetes, male gender and old age. There are only scanty case reports in the literature describing its rare association with colorectal malignancy. All published cases are attributed to bowel perforation resulting in necrotizing fasciitis over the perineal region. Isolated upper or lower limb diseases are rarely identified. Simultaneous upper and lower limb infection in colorectal cancer patients has never been described in the literature. We report an unusual case of multi-limb necrotizing fasciitis in a patient with underlying non-perforated rectal carcinoma.

A 56-year-old male patient, who had a medical history of alcoholic cirrhosis, poorly-controlled diabetes mellitus and mild renal impairment, presented with an one-month history of per rectal bleeding. Digital rectal examination revealed a non-obstructing rectal tumour situated at 8 cm above the anal verge. Tumour biopsy was taken through proctoscope and the histology confirmed it to be an adenocarcinoma. No abdominal discomfort or increase in per rectal bleeding was reported after the procedure. However, one day after the tumour biopsy, he complained of bilateral lower limb pain over the pre-existing ankle edema. He denied any previous history of trauma. No wound or skin abrasions could be identified over both lower limbs. In addition to the swollen lower limbs, he was noticed to have unexplained sinus tachycardia (pulse rate 100 per min) despite normal haemodynamic status and oxygen saturation. Examination of other organ systems was unremarkable. The arterial blood gas, white cell counts, chest radiograph and electrocardiogram were normal. Though Doppler ultrasound did not show any evidence of deep vein thrombosis in both lower limbs, low molecular weight heparin was commenced as pulmonary embolism was not excluded.

His clinical condition rapidly deteriorated over the next 24 h when he developed acute on chronic renal impairment, hypotension and worsening metabolic acidosis that necessitated inotropes and hemodialysis support in the intensive care unit. Urgent ultrasound of the abdomen did not reveal any evidence of obstructive uropathy. He became hypothermic (core temperature 32°C), drowsy and mentally confused. Blood parameters revealed marked leukocytosis and disseminated intravascular coagulation. Empirical intravenous antibiotics including augmentin (amoxycillin and clavulanate), clindamycin and metornidazole were commenced in view of the clinical features of sepsis. Shortly after his stay in the intensive care unit, blisters (Figure 1) were discovered on both swollen lower limbs. Necrotizing fasciitis was suspected and ultimately confirmed with surgical exploration 12  h after the appearance of blisters. Initially, fasciotomy and excisional debridement were endeavored in an attempt to preserve the lower limbs. Meanwhile, high dose penicillin was introduced to replace augmentin. Nevertheless, the worsening clinical sepsis and migratory soft tissue necrosis inevitably resulted in bilateral above knee amputation. Microbiological cultures of blood and necrotic tissues invariably grew group G streptococcus only. Histological examination of the excised tissue also confirmed the diagnosis of necrotizing fasciitis. One day afterwards, similar features of skin changes developed over both upper limbs (Figure 2) that required repeated excisional debridements. In spite of limb amputation, surgical debridement and parenteral antibiotics, he developed fulminant group G streptococcal septicaemia and deteriorated rapidly until he succumbed to multi-organ failure six days after the onset of sepsis. Throughout his disease course, the perineum, groin and abdominal wall remained uninvolved. 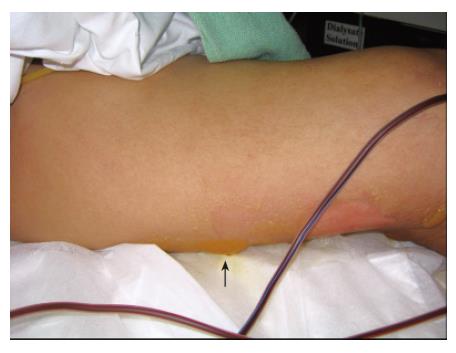 Figure 1 Enlarging blisters over the thigh. One of the blisters is indicated by black arrow.

In the English literature, there are only six reported cases of necrotizing fasciitis associated with colorectal malignancy (Table 1). In these cases, necrotizing fasciitis was all preceded by perforation of colorectal tumours. All except two cases[8,10-12] presented as Fournier's gangrene. One case manifested as psoas abscess with spreading infection to the thigh after retroperitoneal perforation of a sigmoid tumour[9]. The other one involved the anterior abdominal wall as a result of direct tumour invasion and perforation from the transverse colon[13]. In essence, perforated colorectal tumours represent an entry focus for bacterial translocation that might penetrate the subcutaneous soft tissues, leading to necrotizing infection[14]. To our knowledge, our patient is the first reported case of disseminated necrotizing fasciitis affecting all limbs in a non-perforated rectal tumour.

With regard to its etiology, we postulate three causes for such a fulminating disease in our patient. First, chronic subcutaneous tissue edema due to cirrhotic hypoalbuminaemia predispose him to subcutaneous tissue infection[6]. In addition, systemic immunosuppression could well be secondary to the cumulative effects of malignancy, diabetes mellitus and cirrhosis[7]. Lastly, transient bacteraemia might have arisen as a consequence of bacterial translocation emanated from occult necrosis of his rectal tumor[14]. Interestingly, there was a close temporal association between tumour biopsy and the onset of necrotizing sepsis in our patient. Transient bacteraemia following endoscopic tissue biopsy has been reported[15]. However, Gram negative organisms were the main bacteria retrieved and it was elusive to verify the causative association between rectal biopsy and necrotizing soft tissue infection in our patient.

So far as the bacteriological origin was concerned, group G streptococcus was the only culprit in our patient. In 1935, Lancefield, an American microbiologist, first described a Gram positive facultative anaerobic coccus as group G streptococcus that constitutes parts of the normal flora of human skin, respiratory tract and gastrointestinal tract[16-18]. Although it has been rarely implicated in necrotizing fasciitis[19], its associated mortality could be comparable to those induced by streptococcus pyogenes[20], suggesting that group G streptococcus, being a normal flora of the gastrointestinal tract, could represent a potentially life-threatening pathogen for all patients[20].

Regardless of the disparity in pathological and microbiological etiologies, the mortality rate of necrotizing fasciitis remains high. High index of suspicion and prompt surgical intervention are the cornerstone of treatment for improving the disease outcome[7]. We believe that delay in diagnosis and surgical treatment contributes to the demise of our patient.