A 56-year-old woman with a 29-year history of rheumatoid arthritis (RA) was admitted to the hospital, complaining of high fever, abdominal pain and severe bloody diarrhea. Colonoscopy revealed friable and edematous mucosa with spontaneous bleeding, diffuse erosions and ulcers extending from the rectum to the distal transverse colon. Histopathological findings of rectal biopsies were compatible with ulcerative colitis (UC). Being diagnosed as having severe active left-side UC, she was successfully treated with intravenous methylprednisolone followed by prednisolone and leukocytapheresis. Laboratory tests revealed low serum and saliva IgA levels, which might play a role in the development of UC. To our knowledge, this is the first case of UC occurring during the course of RA, accompanied by selective IgA deficiency.

Recent case reports described the development of ulcerative colitis (UC) in patients with rheumatoid arthritis (RA)[1,2]. Although UC is commonly associated with arthritic manifestations such as ankylosing spondylitis and sacroilitis[3], RA complicated by UC is uncommon[4], hence the underlying mechanisms of the association between UC and RA remain unclear. Differentiation between UC and colitis, primarily or secondarily related to RA or drug-induced colitis associated with medications for RA, can be difficult sometimes[5].

Selective deficiency of immunoglobulin A (IgA) is the most frequent hypogammaglobulinemia[6]. It is associated with increased risk of autoimmune diseases including RA[6,7]. One might speculate that IgA deficiency plays a role in the mucosal immune and inflammatory responses of UC[6]. Herein, we describe the development of UC in a patient with longstanding RA and selective IgA deficiency. To the best of our knowledge, this is the first case report on the association of RA with UC and IgA deficiency.

A 56-year-old woman who had been diagnosed with UC at a local clinic 5 mo earlier, was admitted to our hospital, complaining of high fever, exacerbated lower abdominal pain and a 4-wk duration of bloody diarrhea, despite treatment with 30 mg/d of oral prednisolone. She had suffered from RA for 29 years and the current stage and class of RA, based on Steinbrocker’s classification, was IV and II, respectively. RA had been stable for the last 5 years under continuous treatment consisting of bucillamine (100 mg/d), prednisolone (5 mg/d) and D-penicillamine (600 mg/d). She had a history of adverse events of proteinuria and skin eruption with itching against bucillamine and mesalazine, respectively. She had not taken any other medications such as antibiotics, non-steroid anti-inflammatory drugs (NSAIDs) or gold salts, prior to the development of UC. She was a non-smoker, did not drink alcohol and had not undergone pervious gastrointestinal surgery.

On admission, physical examination revealed body weight of 32 kg, height of 146 cm, body temperature of 37.9°C, regular pulse rate of 96/min and blood pressure of 148/76 mmHg. Conjunctiva palpebra and bulbus were normal without pallor or jaundice. Heart sounds were clear with regular sinus rhythm and no rales were audible in the lung fields. The abdomen was tender on palpation in the lower quadrant with weak bowel sounds, but neither muscular guarding nor Blumberg’s sign was noted. Digital rectal examination revealed dark red blood. There was no edema on the face or extremities and there were no signs of motor or sensory disturbances. Typical joint deformities and morning stiffness of RA were noted in both hands.

Chest X-ray revealed no abnormalities such as pneumonia and interstitial pneumonitis. Abdominal plain X-ray revealed a small amount of bowel gas without formation of air-fluid level or free air and no toxic dilation of the colon was seen. Hand X-rays revealed bilateral involvement of most metacarpal phalangeal joints with destruction and deviation, whereas systemic skeletal X-ray study showed no abnormalities in cervical and lumbar spine and hip joints. Barium enema showed disappearance of haustra coli, narrowing and shortening of the affected colon, and uneven surface with spiculation, extending from the rectum to the distal transverse colon (Figure 1). The terminal ileum and the ascending and proximal transverse colon were intact. Barium study of the small intestine and upper gastrointestinal endoscopy were normal. Contrast computed tomography of the abdomen and pelvis showed diffuse mural thickening of the affected colon. Initial sigmoidoscopy performed on the next hospitalization day revealed friable, edematous mucosa with granularity, mucous exudates and spontaneous bleeding throughout the rectum and sigmoid colon. Diffuse erosions and punctate ulcers were noted with lack of normal-appearing intervening mucosa (Figure 2A). Histopathology of colorectal biopsies showed diffuse mucosal infiltration of inflammatory cells, deformed atrophic crypts, goblet cell depletion and crypt abscess (Figure 3). No granulomas, inclusion bodies, vasculitic lesions or amyloid deposits were detected under microscopic examination of hematoxylin-eosin and Congo-red stained sections (data not shown). Based on the clinical, radiological, endoscopic, and histopathological findings, the patient was diagnosed as having severe active, left-sided UC. 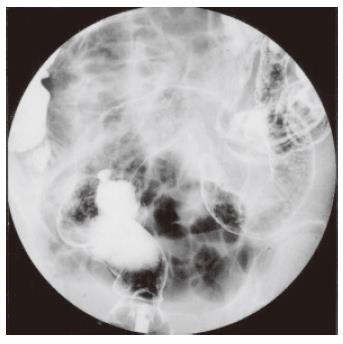 Figure 1 Barium enema shows loss of mucosal pattern with speculation, absent haustration, narrowing and shortening of the bowel, extending from the rectum to the distal transverse colon.

Figure 2 (A) Sigmoidoscopy revealed friable, edematous mucosa with granularity, mucous exudates and bleeding throughout the rectum and sigmoid colon. Multiple erosions and punctate ulcers were observed without normal-appearing intervening mucosa. (B) Repeated colonoscopy before discharge revealed almost normal mucosa from the distal transverse colon to the rectum. 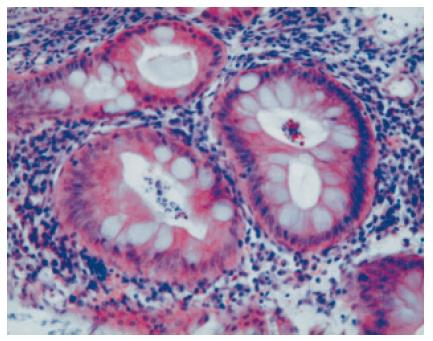 She also received leukocytapheresis (LCAP) therapy, employing a commercially available leukocyte removal column (Cellsorba, Asahi Medical, Tokyo) once a week for 10 successive weeks. Such intensive treatment led to dramatic improvement of clinical symptoms and signs without any adverse reaction and to normalization of laboratory tests. Follow-up colonoscopy 3 wk later revealed marked improvement, and normal colonic mucosa at discharge from the hospital three months after admission (Figure 2B). The RA disease status was unchanged during hospitalization and thereafter. At the last visit to the outpatient clinic, 6 mo after discharge, the patient was still in complete remission of colitis under 10 mg/d of oral prednisolone.

When colitis appears in RA patients, drug-induced colitis, ischemic colitis due to vasculitis associated with RA and secondary amyloidosis must be ruled out first [8-12]. It is known that therapeutic agents for RA such as NSAIDs, gold salts and D-penicillamine give rise to various types of gastrointestinal complications, evidences indicate that colitic lesions are associated with these anti-RA drugs[8-10]. Although Langer et al[9] reported a case of gold salts-induced colitis resembling UC, our patient was not treated with gold salts or NSAIDs. There are also reports on D-penicillamine-induced colitis[10], with rapid recovery after cessation of the agent. Although the patient had used penicillamine for 6 years, colitis had never appeared. Moreover, her colitis improved despite continuous use of this drug. Thus, anti-RA medications are unlikely to be the underlying cause of colitis in our patient.

Rheumatoid vasculitis (also known as malignant RA) affects a variety of organs including kidneys, lungs and gastrointestinal tract[13]. Previous studies indicate that clinically apparent rheumatoid vasculitis occurs in less than 1% of RA patients and intestinal involvement is noted in about 20% of such cases[11]. The gastrointestinal lesions associated with rheumatoid vasculitis are characterized by multiple sharply-defined ulcers, typically spared by normal-appearing mucosa, with a predilection for the small intestine, the sigmoid colon and cecum[8,11]. Burt et al[11] described a patient with RA who had colonic vasculitis presenting as pancolitis similar to UC. In that patient, however, repeated colonoscopy following treatment with prednisolone showed that the intervening mucosa among superficial ulcers was normal, allowing differentiation of colitis due to RA-related vasculitis from idiopathic UC. Histopathological examination of multiple biopsies taken from colorectal mucosa identified no vasculitic lesions in our patient, who showed no other vasculitic diseases such as scleritis and interstitial pneumonitis[13,14].

Recent clinical studies have indicated that the incidence of amyloidosis confirmed by biopsies in RA patients is about 10%[12]. Kato et al[15] reported a suggestive case of gastrointestinal amyloidosis secondary to RA manifested as pancolitis resembling UC. In our patient, however, rectal biopsy specimens showed diffuse infiltration of mono- and poly-nuclear leukocytes and crypt abscess, which were compatible with UC, but no intramucosal amyloid deposits. In addition, neither microbiological nor histopathological examinations showed any pathognomonic findings in this case, thus allowing differentiation between UC and other possible inflammatory bowel conditions.

Being diagnosed as having severe active UC extending to the left-side colon, the patient was treated with intravenous methylprednisolone and subsequently with prednisolone. Given that the patient had already received oral prednisolone even at 30 mg/d with exacerbation of UC, she was also treated with LCAP. In previous studies, LCAP frequently led to significant improvement of UC that had been intractable to steroids[16,17]. A recent open-label multicenter study demonstrated that LCAP can be more effective than high-dose steroid treatment with fewer adverse effects[17]. Currently, LCAP is used as a treatment modality for active UC. Although histopathological examination of colorectal biopsies showed no inclusion bodies, cytomegalovirus antigenemia was detected, allowing our patient to undergo additional treatment with intravenous gancyclovir. We believe that the intensive combination therapies led to complete clinical and endoscopic remission of severe and steroid-refractory colitis.

Arthritic manifestations represent the most common extraintestinal manifestations of inflammatory bowel diseases, affecting 31% and 36% of patients with UC and Crohn’s disease, respectively[5]. Coexistence of RA and UC is, however, rare and no more than 0.14% to 0.8% of UC patients suffer from RA[4,18]. Larger population-based studies are warranted to unravel the mechanisms underlying the association between UC and RA. In this regard, accumulation of HLA data may provide a potential clue for this relationship[19].

In the present case, serum concentrations of IgA, but not IgG or IgM, were constantly low ranging from 1 to 20 mg/dL and reduction of secretory IgA in saliva was also noted during hospitalization. Systemic and local reduction of IgA might result in weakening of the mucous barrier against intestinal flora and enhance exposure of the mucosal immune system to intestinal bacteria or the toxic components, eventually leading to sustained inflammation within the colorectal mucosa[4]. However, the precritical serum IgA level had not been estimated in our patient, and the etiology of selective IgA deficiency remains elusive as to whether it occurred primarily or not. In fact, secondary IgA deficiency may be caused by such anti-RA drugs as D-penicillamine, steroids, both of which had been prescribed for her RA, sulfasalazine and gold salts[7,20].

In conclusion, we described the first case of RA, complicated with UC and selective IgA deficiency. Underlying immune dysfunction, possibly in addition to genetic predisposition, might play a role in these associations.