AIM: To estimate the serum α1-antichymotrypsin (ACT), α1-acid glycoprotein (AGP) and transferrin (Tf) concentrations and to evaluate the microheterogeneity of these acute phase proteins in patients with ulcerative colitis.

In ulcerative colitis, a chronic inflammatory disease of unknown etiology, proinflammatory cytokines, such as tumor necrosis factor (TNF), interleukin-1 (IL-1), IL-6 and IL-2, play a major pathophysiological role[1-5]. Acute phase response is a systemic answer to mechanical injuries, infections as well as an unspecific inflammation. Acute phase proteins (APP) play an important role in this non-specific immune reaction. These proteins are produced by the liver in answer to cytokine mediation. The concentrations of many APP have been studied in ulcerative colitis patients[6-8]. Measurement of APP serum concentrations offers a valuable means of assessing the intensity of inflammatory bowel disease. Unsurprisingly, various studies have shown the correlation between these inflammatory mediators and acute phase proteins, such as C-reactive protein (CRP), α1-acid glycoprotein (AGP), α1-antichymotrypsin (ACT) and serum amyloid A (SAA)[9-11]. A acute phase proteins and clinical signs are also of a high value for the treatment and remission of ulcerative colitis. However, the etiological and clinical importance of these proteins is still not completely revealed.

Except for CRP, albumin and SAA, all acute phase proteins are glycoprotiens. Glycosylation is the primary cause of microheterogeneity in proteins. It is an enzyme-directed and site-specific process. Protein sugar prints are conserved, not random and determined independently from the synthetic rate of protein. There is O-linked glycosylation to the hydroxy oxygen of serine and threonine side chains and N-linked glycosylation to the amide nitrogen of asparagine side chains. The N-glycan chains of α1- AGP, α1- ACT and Tf differ in their branching, showing bi-, tri-, and tetra-antennary structures[12-14]. These serum N-glycoproteins physiologically occur in few variants, called microheterogeneity. During acute phase response both concentrations and percentage of individual variants are changed.

Glycosylation may play a role in cell-cell adhesion. The highly branched and sialylated form of AGP which is the ligand for cell adhesion molecules such as E-selectin and P-selectin, inhibits migration of neutrophils, monocytes and T-cells, and ameliorates complement activity[15]. The asialylated carbohydrate-deficient variant of AGP appears mainly in sera of patients after acute inflammation, infection, burn or other severe tissue damage or necrosis[16]. The immunomodulatory properties of AGP have been shown to depend on its glycosylation. The inhibition of lymphocyte proliferation depends on the branching degree of the glycans of AGP[17]. The sialylated acute phase proteins protect against immune complex-induced injury[18]. An increase of sialyl-variants of APP seems to be a mechanism responsible for feedback inhibition of leucocyte migration to inflamed tissues. The heterogeneity of the glycosylation pattern of AGP that has been found in patients with ulcerative colitis reflects changes in response to inflammation[19].

The changes in patterns of glycosylation of transferrin have been observed in iron deficiency anaemia, rheumatoid arthritis, liver cirrhosis or in physiological status such as pregnancy[20]. The microheterogeneity pattern of Tf shifts under inflammatory conditions towards highly branched glycans. Differences in glycosylation of Tf seem to alter the iron metabolism.

The aim of this study was to estimate the changes in microheterogeneity in glycosylation patterns of α1-AGP, α1-ACT and Tf in sera of patients suffering from ulcerative colitis.

The sera were separated by centrifugation after clotting and stored at -70°C. Rocket immunoelectrophoresis was used to determine the total serum concentrations of AGP, ACT, Tf, and CRP.

Microheterogeneity of ACT, AGP and Tf was analysed by crossed immunoaffinity electrophoresis (CIAE) with lectin-concanavalin A. The lectin-concanavalin A was included in the first-dimension gel as the diantennary-specific affinocomponent. Separation of different glycoforms of proteins in sera was done via electrophoresis of these fluids with a concanavalin A-containing (Con A) polyacrylamide slab gel. Proteins lacking glycans of the diantennary type are not retarded by Con A, whereas proteins containing one or more diantennary glycans bind to Con A, and are electrophoretically retarded in the gel. Detection of the separated glycoforms was achieved through electrophoresis in the second dimension, using the polyclonal protein-specific anti-IgG antibody. The resulting precipitation lines were stained, and the relative occurrences of lectin-retarded and lectin-nonretarded glycoforms were calculated from the areas under the curves. 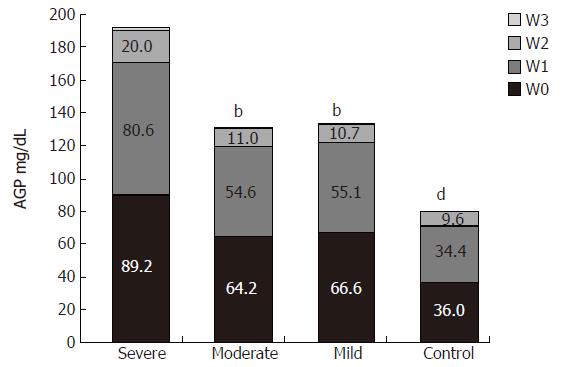 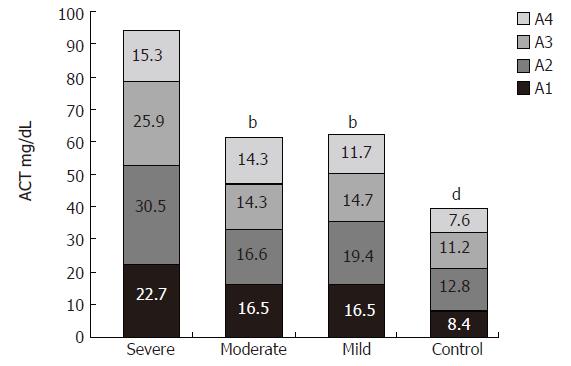 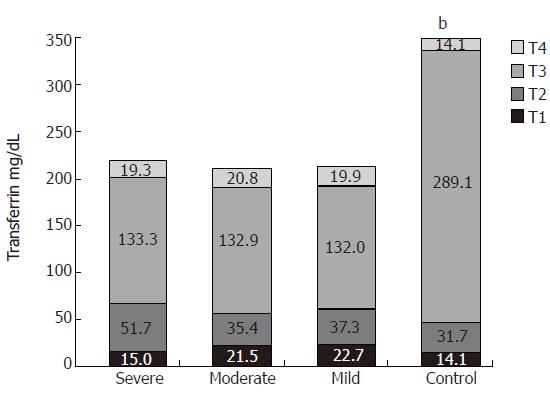 The increased concentrations of AGP and ACT were not associated with a large shift in the microheterogeneity patterns.

Decreased serum transferrin concentration in ulcerative colitis patients was accompanied with redirection of glycan synthesis to the highly branched and sialylated glycan. We noticed that the percentage of T2 (bi-, tri- and tetra-antennary) and T1 (tetra- and more antennary) fractions of transferrin were significantly higher in the investigated groups than in healthy subjects, while the percentage of T3 (biantennary) and T4 (asialylated, carbohydrate-deficient) fractions were lower.

Measurement of acute phase proteins may bring new insights into the mechanisms of inflammatory reactions occurring in ulcerative colitis. In our study, both during remission and exacerbation of ulcerative colitis the glycosylation profiles of AGP and ACT were altered. AGP variant W3 was not present in sera of both healthy individuals and ulcerative colitis patients during remission. However, it appeared in sera of the same patients during exacerbation. This variant is always present in the sera of patients after inflammation, infection, burn or other severe tissue damage. Its presence in the sera of our studied patients was probably caused by the active necrotizing and inflammatory processes in the gut. The high concentration of ACT demonstrated in our patients, is also characteristic for disorders where tissue necrosis occurs (e.g. in burns).

Though the clinical image can confirm ulcerative colitis (UC) is a chronic inflammatory disease, alternations in APP concentrations and microheterogeneity depict rather a domination of “acute inflammatory image” that is probably caused by IL-6. Even in remission of UC the glycosylation profile of the best described AGP does not return to normal but remains altered, with a relative increase of Con A reactive (thus: biantennary) glycoforms. This constant inflammatory stimulation probably contributes to altered Tf glycosylation and, as a consequence to deteriorated iron metabolism and anaemia. In our study, the concentration of transferrin, a negative acute phase protein, was markedly decreased in the acute phase of ulcerative colitis, suggesting that low concentration and especially changes of the glycosylation profile of Tf may be responsible for the impaired iron metabolism in patients suffering from ulcerative colitis.

In sera of healthy individuals, transferrin separates into four variants: T1 weakly reacting with Con A (with mainly triantennary glycans), T2 (with one biantennary glycan and one triantennary glycan), T3 (with two biantennary glycans) and T4 (with probably defective sugars). The variant T3 covers about 80% of the total protein and is the main fraction able to bind to iron, consisting mainly of apotransferrin. Our study showed the alterations of Tf glycosylation in sera of patients suffering from ulcerative colitis. It is well known that existing anaemia in UC patients is not only to the blood loss with a stool, but also due to the chronic inflammatory process. It is possible that the different glycoforms of Tf have a different iron affinity that may affect the iron balance in the organism.

A correlation was shown between the concentration of transferrin T2 variant, bearing partially triantennary glycans and platelet count as well as α-2 protein electrophoretic fraction, whereas a negative correlation was shown between T2 variant and albumin concentration. We are thus able to show that inflammation influences the microheterogeneity of transferrin. The higher intensity of the inflammatory process is combined with deteriorated iron transport ability to transferrin, which may intensify anaemia.