Recent advances in techniques of therapeutic endoscopy for stomach neoplasms are rapidly achieved. One of the major topics in this field is endoscopic submucosal dissection (ESD). ESD is a new endoscopic technique using cutting devices to remove the tumor by the following three steps: injecting fluid into the submucosa to elevate the tumor from the muscle layer, pre-cutting the surrounding mucosa of the tumor, and dissecting the connective tissue of the submucosa beneath the tumor. So the tumors are resectable in an en bloc fashion, regardless of the size, shape, coexisting ulcer, and location. Indication for ESD is strictly confined by two aspects: the possibility of nodal metastases and technical difficulty, which depends on the operators. Although long-term outcome data are still lacking, short-term outcomes of ESD are extremely favourable and laparotomy with gastrectomy is replaced with ESD in some parts of therapeutic strategy for early gastric cancer.

Endoscopic resection of stomach neoplasms has been originated from the development of a polypectomy technique using the high-frequency current to gastric polyps in 1968[1,2], and it has become popular as endoscopic mucosal resection (EMR) since the birth of a strip biopsy method in 1984[3] and a cap technique in 1993[4]. Endoscopic submucosal dissection (ESD) technique is a new endoscopic treatment using cutting devices, which has developed from one of the EMR techniques, namely endoscopic resection after local injection of a solution of hypertonic saline-epinephrine (ERHSE)[5]. ESD consists of the following three steps: injecting fluid into the submucosa to elevate the tumor, pre-cutting the surrounding mucosa of the tumor, and dissecting the connective tissue of the submucosa beneath the tumor[6-10]. Major advantages of this technique in comparison with conventional EMR are as follows. The resected size and shape can be controlled, en bloc resection is possible even in a large tumor, and tumors with ulcerative findings are also resectable. So this technique can be applied to the resection of complex tumors such as large tumors, ulcerative non-lifting tumors, and recurrent tumors. The disadvantages of this technique are requirement of 2 or more assistants, time-consuming, much more bleeding and a little higher perforation rate than conventional EMR[11]. It is still controversial whether the esophageal or colorectal neoplasms in an early stage should be resected in an en bloc fashion by using ESD, considering the technical difficulty, associated risks, and favorable outcomes by conventional EMR[12-16]. However, in case of the stomach neoplasms, especially when large or ulcerative tumors are targeted as the subjects of endoscopic resection, necessity of en bloc resection is emphasized, because multi-fragmental resection causes insufficient histological evaluation and local recurrence of multi-fragmental resection becomes significantly higher than that of en bloc resection[17]. So in Japan, ESD is now gaining acceptance as the standard endoscopic resection techniques for stomach neoplasms in an early stage, especially for large or ulcerative tumors.

ESD requires special cutting knives, such as a needle knife[5], an insulation-tipped electrosurgical (IT) knife[6,21-24], a hook knife[25,26], a flex knife[8-10], and a triangle-tip (TT) knife[27,28], or special devices such as a small-caliber tip transparent (ST) hood[29] (Figure 1). As another approach to successful ESD, investigations of submucosal injection solutions have been actively done. It was reported that a hyaluronic acid solution makes a better long-lasting submucosal cushion without tissue damage than other available solutions[29-33]. As a further improvement of hyaluronic acid solution, usefulness of a mixture of high-molecular-weight hyaluronic acid, glycerin, and sugar has also been reported[34,35]. A representative case of ESD procedure using a flex-knife and a mixture of high-molecular-weight hyaluronic acid, glycerin, and sugar is shown in Figure 2[36]. 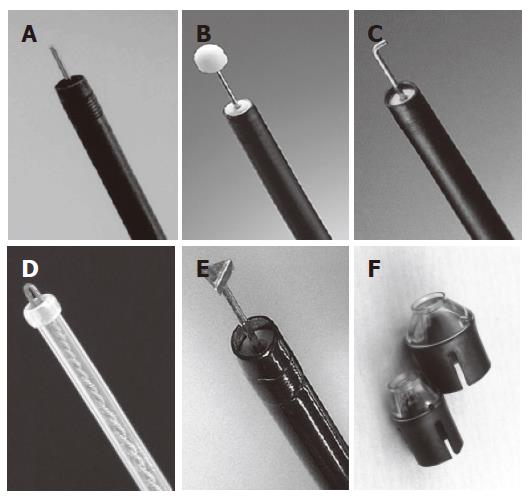 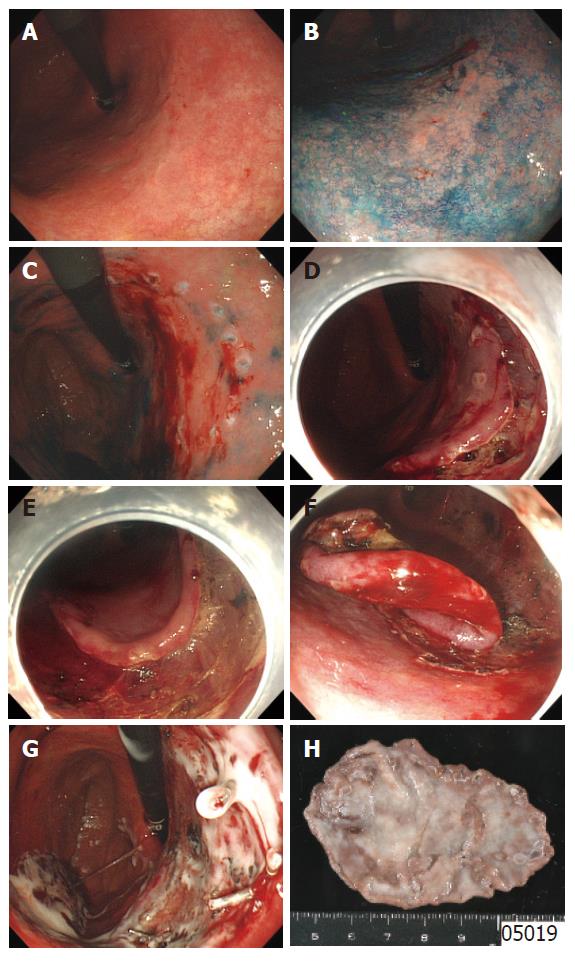 After chromoendoscopy using 0.25% indigo carmine to clarify the border of the tumor, circumferential markings are made by using a flex-knife, which is set to about 1 mm in length of the knife, at about 5 mm outside of the tumor with 2-mm intervals between each marking.

Solutions prepared for submucosal injection are a 10% glycerine with 0.9% NaCl plus 5% fructose solution (glyceol, Chugai Pharmaceutical co., Tokyo Japan) alone for small distal gastric tumors without ulcer findings and a mixture of glyceol and 1% 1900 ku hyaluronic acid preparation (suvenyl, Chugai Pharmaceutical co. Tokyo Japan) for complex or proximal gastric tumors. The mixing ratio of glyceol and suvenyl is 7:1 for complex or proximal gastric tumors. A small amount of epinephrine to make a concentration of 0.0005% is added to obtain vasoconstriction for hemostasis and indigo carmine is also added to find out the seeping area of the submucosal injection solution as operators’ preference. Injection of these solutions is performed into the submucosal layer just outside the markings where mucosal incision intends to be made at first. The volume of injection is about 2 mL once, and injection is repeated several times before starting mucosal incision until the targeted area is lifted enough. After exposure of the submucosal layer, injection is applicable from the exposed submucosal layer to lift up the submucosal layer intended to be cut.

After the tumor is lifted, mucosa outside the markings is incised circumferentially by using the same flex-knife, which is set to about 2 mm in length of the knife. The starting point for cutting is principally a distal part from the mouth. Retroflex position of the endoscope is usually used if applicable when the distal part of the tumor is cut.

Small tumors can be resected by an electrosurgical snare only after mucosal incision around the markings without submucosal dissection. However, large tumors and tumors with ulcer findings or located in a tortuous area cannot be resected by an electrosurgical snare, dissecting the submucosa completely is thus needed. A flex-knife, which is set to about only 1 or 2 mm in length of the knife is also used for dissecting the submucosa. If the target to be dissected cannot be seen directly by any way, a transparent attachment on the tip of the endoscope is useful to stretch the connective tissue and improve the field of viewing in the submucosa. Because the submucosal cushion flattens down as time is passed, it is also important to start dissecting the submucosa immediately from the incising part of the mucosa before further marginal mucosal cutting and to inject the prepared solution into the submucosa repeatedly if a security cushion is necessary to be kept.

Effective control of bleeding during the procedure, especially in the step of submucosal dissection is important for safer, faster, and more reliable ESD. It is more desirable to prevent bleeding than to stop it after its occurrence. For vessels, which are smaller than the tip of the knife, noncontact electrocoagulation of the vessels with a flex-knife is usually enough to prevent or stop bleeding without changing to another device. Bleeding from large vessels also can be prevented or stopped by using a hemostatic forceps.

After total removal of the tumor, all visible vessels located in the post-ESD ulcer base are treated using hemostatic forceps. Finally, 20 mL of sucralfate liquid is sprayed using the outer sheath of a rotational endoscopic clip device to confirm the achievement of correct hemostasis and to coat the post-procedure ulcer base[37].

After ESD, patients are prohibited from eating and drinking until the next day of ESD. If laboratory findings and chest and abdominal X-ray remain unremarkable, the patients are permitted oral soft foods. Follow-up endoscopy is performed within 1 wk to check up post ESD ulcer healing before the patient is discharged from the ward. Proton pump inhibitor and sucralfate are administered until confirmation of healing of the post ESD ulcers. All patients with ESD also undergo a follow-up endoscopy 2 mo after ESD to confirm the healing and exclude recurrence[38-40]. In case of curative ESD en-bloc resection, annual endoscopies are performed to detect new metachronous tumors rather than recurrent tumors, since the local recurrence rate is very low[17]. For tumors with non-curative or non-evaluable resection margins, but fulfilling the criteria of node-negative tumors, endoscopy is performed every 6 mo to detect local recurrent tumors, at least for the first three years of follow-up.

Complications of endoscopic resection include pain, bleeding, perforation, stricture formation, etc. Bleeding is the most common complication, which is typically minor and treatable with endoscopy. The risks vary according to the definition of bleeding (Table 2). Most bleeding occurs during the procedure or within 24 h and predominantly in tumors located in the upper third during the procedure or the lower third of the stomach after the procedure[42]. Our preliminary data show that 13 of 382 resections (3.4%) are complicated by post-ESD bleeding. Eight bleedings (62%) occur from the post-ESD ulcers located in the lower third, 4 from the middle third and 1 from the upper third of the stomach. Eight bleedings (62%) also occur within 24 h after ESD, 2 d after ESD, 3 between 6 d and 10 d after ESD. These findings indicate that post-ESD bleeding should be especially checked for within a day after ESD when the tumors are located in the lower third of the stomach.

Perforation is another major complication related to ESD. As a result of the techniques, the perforation rate of ESD has decreased to 0%-8%[7,22,25,28,35,42,43] (Table 2). Furthermore, recent case series suggest that immediately recognized perforation can be successfully sealed with endoclips as conservatively observed without emergency laparotomy by endoscopic clipping, nasogastric suction, decompression of pneumoperitoneum, and antibiotics [46].

Endoscopic resection has become a reasonable and convenient diagnostic and treatment modality, because histological information about the whole tumor can be obtained and furthermore, a curative treatment is achieved in case of localized tumors without lymph node metastasis, preserving the whole stomach. From this point of view, ESD enables us to resect not only small tumors, but also large or ulcerative tumors endoscopically. ESD has also brought us the concept of diagnostic endoscopic resection for some tumors clinically diagnosed as submucosal invasive cancers, because histopathological diagnosis of submucosal invasive cancers lacks consistency with clinical diagnosis in 66% of cases[47]. If we can perform thorough and precise histopathological investigations using the resected specimens in an en bloc fashion, there is no way to deny the application of endoscopic resection as the first step before gastrectomy, which would consequently avoid unnecessary gastrectomy. However, some complications related to ESD are still a matter of concern. Further refinements of the technique will ultimately help to achieve the goal of eradication of stomach neoplasms.