RESULTS: CAPE displayed a strong inhibitory effect in a significant dose- and time-dependent manner on SW480 cell growth. FCM analysis showed that the ratio of G0 /G1 phase cells increased, S phase ratio decreased and apoptosis rate increased after SW480 cells were exposed to CAPE for 24 h. Pretreatment of SW480 cells with CAPE significantly suppressed β-catenin, c-myc and cyclinD1 protein expression. CAPE treatment was associated with decreased accumulation of β-catenin protein in nucleus and cytoplasm, and concurrently increased its accumulation on the surface of cell membrane.

Caffeic acid phenethyl ester (CAPE) is a phenolic antioxidant. As an active component of propolis, CAPE has many biological and pharmacological functions including immunoregulation, anti-inflammatory, antiviral, antibacterial and antitumor activities. Several studies have demonstrated that CAPE has antiproliferative effect, apoptosis-inducing effect in various tumor cells in vitro[1-4] and in vivo[5,6]. CAPE also inhibited the development of azoxymethane-induced aberrant crypts in the colon of rats[7]. Furthermore, a number of studies reported that CAPE elicits apoptosis and suppresses the growth of transformed cells, and the cytotoxicity of CAPE to transformed cells is sensitive and selective[8-10]. Multiple molecular mechanisms seem to be involved in the tumor suppressive effects of CAPE. It was reported that CAPE could inhibit NFκB and induce apoptosis via Fas signal activation in human breast cancer MCF-7 cells[11]. Additionally, Carrasco et al[12] found an 85% decrease in nuclear localization of the p65 subunit of NF-kappa B. While in C6 glioma cells, the tumor suppressor proteins P53 and p38 mitogen-activated protein kinase (p38 MAPK) are involved in CAPE-induced apoptotic cell death[13].

Here we report the anti-tumor effect of CAPE in association with β-catenin associated signaling in SW480 colorectal cancer cells. These studies have important implications for CAPE to be used as a potential therapeutic agent for colorectal cancer.

The human CRC cell line SW480 was purchased from the American Type Culture Collection (ATCC). The cells were cultured in RPMI-1640 medium supplemented with penicillin G (100 U/mL), streptomycin (100 μg/mL) and 10% fetal calf serum. Cells were grown at 37°C in a humidified atmosphere of 50 mL/L CO2 and were routinely sub-cultured using 0.25% (w/v) trypsin-EDTA solution.

Cell density was adjusted to 0.3-1.0 × 107 cells/mL. Cells were serum-starved for 24 h and then treated with different concentrations of CAPE (2.5, 5 and 10 mg/L) for 24 h. Then the cells were harvested with trypsin-EDTA to produce a single cell suspension. The cells were pelleted by centrifugation and washed twice with phosphate-buffered saline (PBS). Then, the cell pellets were resuspended in 0.5 mL PBS and fixed in 5 mL ice-cold 70% ethanol at 4°C. The fixed cells were spun down by centrifugation and the pellets were washed with PBS. After resuspension with 1 mL PBS, the cells were incubated with RNase A (20 mg/L) and PI (50 mg/L) and shaken for 1 h at 37°C in the dark. The stained cells were analyzed using a FACScan flow cytometer in combination with BD analysis II software (Becton Dickinson).

The cells were treated and harvested in the same way as mentioned above. Analysis of apoptosis was performed using the Annexin-V and PI double staining kit according to the manufacturer’s protocol. After treatment with CAPE, the cells were immediately analyzed by flow cytometry. The apoptotic cells were localized in the right lower quadrant of a dot-plot graph by using Annexin-V-fluorescein versus PI.

Cells were placed in serum-free medium with or without CAPE (2.5, 5 and 10 mg/L) for 24 and 48 h, then were lysed in solubilization buffer containing sodium dodecyl sulfate(SDS) and β-mercaptoethanol. After centrifugation, the supernatant was collected and the protein concentration determined by the BioRad DC kit. Equal amounts of protein (50 μg) in each sample were resolved in 10% SDS polyacrylamide gel electrophoresis (SDS-PAGE) and transferred to a polyvinylidene difluoride (PVDF) membrane. After blocked with 2% skim milk, the membranes were incubated with primary antibodies at appropriate dilution (β-actin, 1/1000; β-catenin, c-myc and cyclinD1, 1/500) overnight at 4°C. Horseradish peroxidase-conjugated secondary antibody was diluted 1/5000 and incubated for 1 h at 20°C. Immunoreactive proteins were detected with an ECL system, and light emission was captured on Kodak X-ray films. Product bands were quantitated by scanning densitometry.

SW480 cells grown on glass coverslips were treated for 48 h with CAPE (2.5, 5 and 10 mg/L) or an equivalent dilution of DMSO, under standard culture conditions as described above. Then cells were washed with PBS and fixed with methanol for 20 min. Incubation with monoclonal anti-β-catenin antibody (1:200) was carried out overnight at 4°C. This was followed by incubation with FITC-conjugated secondary antibody (1:200) for 1 h at room temperature. Omission of the primary antibody was used as a negative control. Images were collected using laser scanning confocal microscopy. 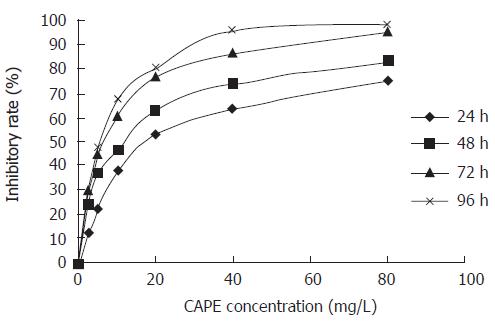 Figure 1 Effect of CAPE on SW480 cell proliferation. SW480 cells were treated with CAPE at indicated concentrations for 24, 48, 72 and 96 h. The cell viability was determined by MTT assay.
Effects of CAPE on cell cycle progression

In order to examine the effects of CAPE on cell cycle progression, SW480 cells were treated with designated concentrations of CAPE for 24 h. The distributions of cells in each of the cell cycle phases were determined by FCM. As shown in Figures 2 and 3, the percentage of cell population of the G0/G1 phase significantly increased, while those in S and G2/M phase decreased. CAPE caused cell cycle arrest in G0/G1 phase in a dose-dependent manner. 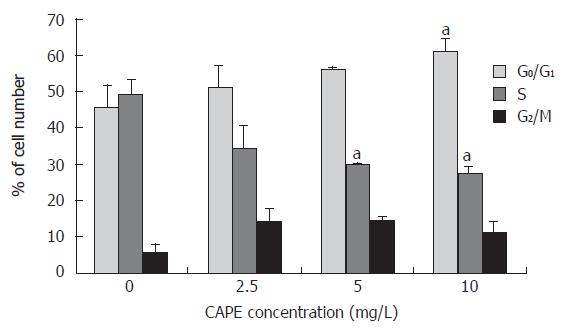 Figure 2 Effect of CAPE on SW480 cell cycle distribution. The percentage of cells in each phase of the cell cycle, G0/G1, S, and G2/M was determined by FCM after cells were treated with indicated concentrations (2.5, 5 and 10 mg/L) of CAPE for 24 h. aP < 0.05 vs the control group, treated with vehicle, DMSO only. 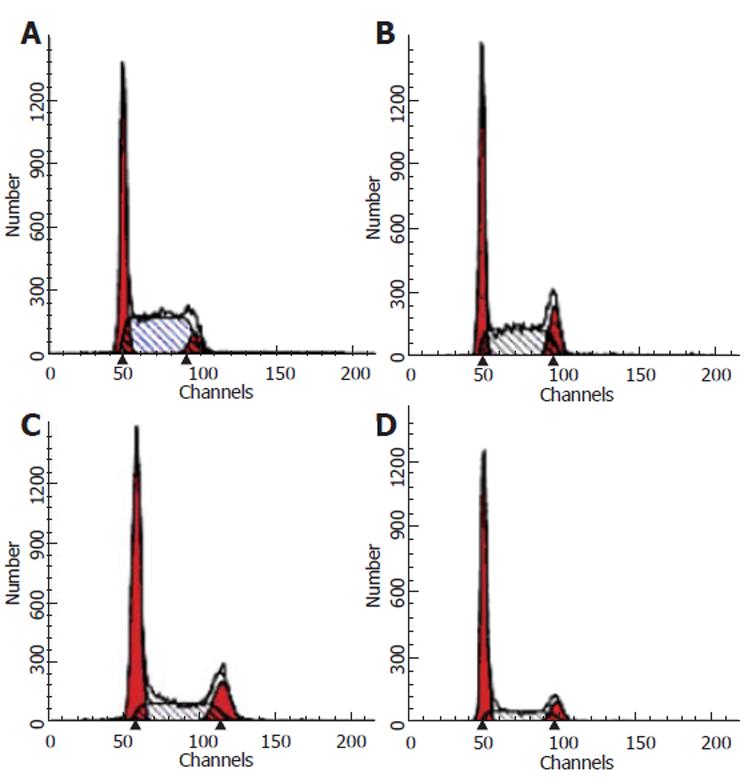 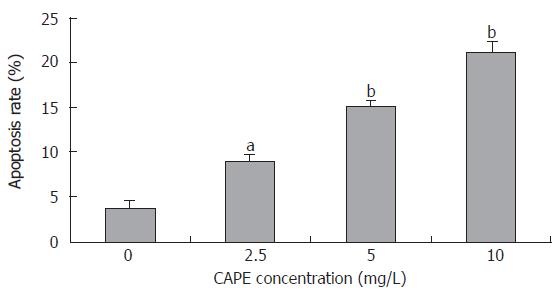 Figure 4 Effect of CAPE on SW480 cell apoptosis. After treated with CAPE at indicated concentrations for 24 h, the SW480 cell apoptosis rates were analyzed by Annexin-V and PI double-staining flow cytometry. aP < 0.05, bP < 0.01 vs the control group. 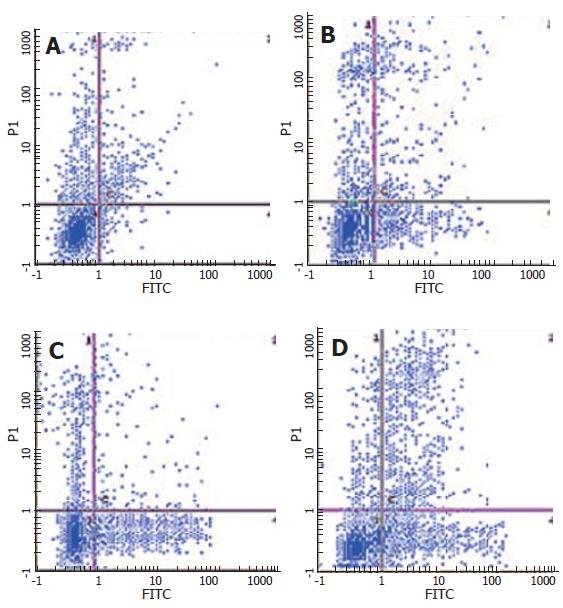 To investigate the mechanisms underlying CAPE induced apoptosis, we examined the effect of CAPE on the expression of β-catenin signaling pathway related genes. After SW480 cells were exposed to CAPE (2.5, 5 and 10 mg/L) for 24 and 48 h, Western blot analysis showed that CAPE significantly suppressed β-catenin protein expression in a dose and time-dependent manner. CAPE treatment after 48 h markedly decreased the expression of c-myc and cyclin D1, two of the β-catenin associated signaling pathway target genes (Figure 6). 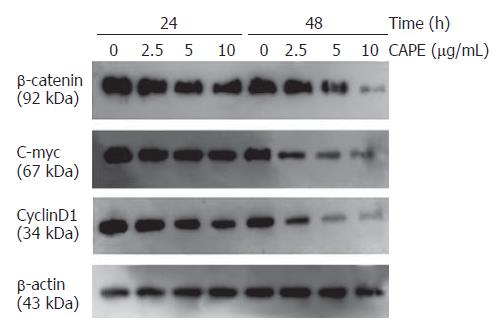 Indirect immunofluorescence studies of β-catenin localization in SW480 cells revealed that CAPE treatment decreased the accumulation of β-catenin protein in nucleus and cytoplasm, and concurrently increased its accumulation on the surface of cell membrane (Figure 7).

Propolis has been used since ancient times in folk medicine. Researches indicate that propolis exhibits immunoregulation, anti-bacterial, anti-inflammatory and anti-tumor activities[18-20]. As an active component of propolis, CAPE is receiving much attention in the medical research community because of its potential for the treatment of a number of disorders, including cancer. Recent studies demonstrated that CAPE has antiproliferative and apoptosis-inducing effects in various tumor cells. An in vivo study showed that CAPE decreased the growth of the xenografts of C6 glioma cells in nude mice[6]. Also, dietary intake of CAPE decreased tumor formation in the enterocytes of the Min/+ mouse[21].

In the present study, we investigated the effect of CAPE on cell proliferation, cell cycle and apoptosis of SW480 CRC cells. Our data demonstrated that CAPE treatment could significantly inhibit cell growth in a dose- and time-dependent manner, along with induction of G0/G1 arrest and apoptosis in SW480 cells.

Multiple molecular mechanisms seem to be involved in the tumor suppressive effect of CAPE. Recently, it was reported that CAPE could inhibit NFкB, inducing apoptosis via Fas signal activation in human tumor cells[11,12]. Hung et al[22] reported that down-regulation of Mcl-1 gene expression and activation of caspase-8 are associated with CAPE-triggered cell apoptosis. Moreover, tumor suppressor proteins P53 and p38 MAPK play a prominent role in the CAPE-induced apoptotic cell death in C6 glioma cells, which might contribute to the anti-tumor effect in these cells[13].

In summary, we have shown that CAPE can inhibit the growth of human SW480 colorectal cancer cells by inducing cell cycle arrest and apoptosis. Decreased β-catenin and the β-catenin associated signaling pathway target gene expression might mediate the anti-tumor effects of CAPE. These findings have strong implications for CAPE as a potential therapeutic agent for colorectal cancer.