METHODS: Peripheral blood monocytes were isolated from blood of healthy individuals by Ficoll£Hypaque sedimentation and cultured in complete medium containing rhGM-CSF and rhIL-4. Cells were cultured for seven days, with cytokine addition every two days to obtain immature DCs. Characteristics of the cultured cells were observed under light and scanning microscope, and the expression of DC-SIGN was detected by immunofluorescence staining.

RESULTS: After seven-day culture, a large number of cells with typical characteristics of DCs appeared. Their characteristics were observed under light and scanning electron microscope. These cells had a variety of cell shapes such as those of bipolar elongate cells, elaborate stellate cells and DCs. DC-SIGN was detected by immunofluorescence staining and its expression level on cultivated dendritic cells was high.

CONCLUSION: DCs with a high expression of DC-SIGN can be generated from human peripheral blood monocytes in complete medium containing rhGM-CSF and rhIL-4.

Dendritic cells (DCs) are professional antigen presenting cells (APCs) critically involved in the initiation of T cell-dependent immune responses as a consequence of their high expression of MHC and co-stimulatory molecules. However, it is becoming increasingly clear that some pathogens subvert DC functions to escape immune surveillance[1]. Many cell-surface molecules of DCs can bind to viral envelope glycoproteins without mediating entry. Instead, they serve as capture receptors that disseminate viral particles to target organs or susceptible cells. The C type lectin of DC-SIGN, one of the cell-surface molecules of DCs, functions as a capture receptor for several viruses, such as HIV type 1 (HIV-1)[2], hepatitis C virus (HCV)[3] and dengue virus[4]. Therefore, further investigations of the function of DCs and the interactions between DC-SIGN and pathogens are helpful in determining their importance in vivo. In this study, we generated dendritic cells from peripheral blood mononuclear cells (PBMC) from normal donors and high DC-SIGN expression was detected on the surface of dendritic cells by immunofluorescence staining.

MATERIALS AND METHODS
Medium and reagents

Human peripheral blood mononuclear cells (PBMC) were isolated from buffer coat from normal donors by Ficoll-Hypaque density gradient centrifugation according to standard procedures. Monocytes were re-suspended in RPMI-10% FCS at 1×106 cells/mL, and allowed to adhere to 6-well plates (Costar Corp., Cambridge, MA). After a 2h adherence step at 37 °C in complete medium, nonadherent cells were washed with PBS and the remaining adherent cells were immediately subjected to the DC differentiation protocol. Briefly, monocytes were re-suspended and cultured in RPMI 1640 supplemented with 10% FCS, 25 mmol/L HEPES, and 2 mmol/L glutamine (complete medium) containing 1000 U/mL rhGM-CSF and 1000 U/mL rhIL-4. Cells were cultured for seven days, with cytokine addition every two days to obtain DCs (before incubation, a piece of 12mm × 12mm sterile coverslip was put into one of the plates and used for scanning electronic microscopy)

Cells were observed under light microscope during incubation. After seven-day culture, the coverslip was covered with DCs and prefixed with a 2% glutaraldehyde solution for 1 h at 4 °C. Post-fixation was done with a 2% osmium tetroxide solution for 30 min at 4 °C. After each fixation, the samples were washed twice in PBS containing BSA, dehydrated in graded ethanol and dried at “critical point” in liquid CO2 under 95-bar pressure. Then, the coverslip was covered with gold by cathodic spraying. Finally, the samples were examined under scanning electron microscope (S-520, HITACHI).

Cells to be used for staining with antibody were Fc- blocked cells by treatment with 1μg of BSA/105 cells for 15 min at room temperature, without washing the excess blocking BSA from this reaction. Then 25 μL of the Fc-blocked cells (1×105 cells) was transferred to a 5 mL tube, and 10 μL of PE-conjugated anti-DC-SIGN reagent was added. After incubated for 30-45 min at 4 °C in the dark, un-reacted anti-DC-SIGN reagent was removed by washing the cells twice in 4 mL of isotonic phosphate buffer supplemented with 0.5% BSA by centrifugation at 500 r/min for 5 min. The cell pellet was re-suspended in 100 μL of PBS buffer and allowed to adhere to poly-L-lysine-coated coverslips for 30 min at 4 °C in darkness for final immunofluorescence. The representative fields of cells were photographed through an oil immersion lens on a Leica DM 6000B microscope (Leica Microsystems, Wetzlar, Germany).

Phase-contrast observation: Three cellular aggregates were attached to a layer of adherent cells (Figure 1A). Some of the profiles in the aggregates had veil- or sheet-like processes of DCs. On d 7 of culture, these adherent cells emigrated from the clusters, came off the surface and many typical DCs were seen floating in the culture medium (Figure 1B). 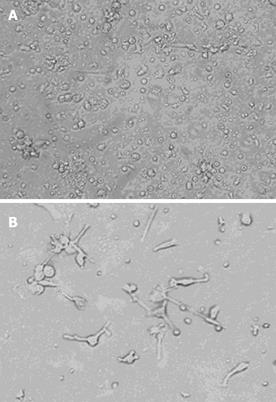 Scanning electron microscopy: Further morphological observations were carried out under scanning electron microscope (SEM). These cells had a variety of cell shapes such as bipolar elongated cells, elaborate stellate cells and DCs. Most pseudopods were long and uniform in width with blunt terminations, but smaller spinous processes were also evident (Figure 2). This phenomenon indicated that DCs had a variety of branching forms, and constantly extended and retracted many fine cell processes. The adjective “dendritic” might be appropriate for this particular cell type(Figure 3). 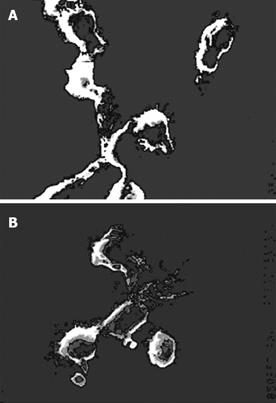 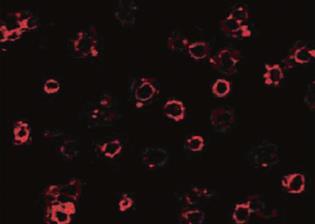 The DC-SIGN expression was detected by immunofluorescence staining with monoclonal anti-human DC-SIGN phycoerythrin. Most of the cultured cell surfaces were stained red, exhibiting a high level of expression of DC-SIGN on the surface of DCs.

In this study, we generated DCs from human PBMC with 10% FCS-RPMI 1640 supplemented with rhGM-CSF and rhIL-4. DC-SIGN expression was found on the surface of DCs.

DCs are specialized and co-stimulatory cells which play an important role in the induction of cellular immune response to antigens. DCs interact with pathogens using conserved pattern-recognition receptors, which recognize characteristic molecular arrangements within microbial carbohydrates, lipids and nucleic acids[5]. Receptors of this type include Toll-like receptors (TLRs)[6,7] and C-type lectins[8]. TLRs can transfer information about the interacting pathogens into DCs through intracellular signaling cascades, thereby eliciting appropriate cellular processes, such as DC maturation and induction of anti-inflammatory cytokines[5,6,9]. By contrast, C-type lectins recognize pathogens through their carbohydrate structure and internalize the pathogens for antigen processing and presentation[10,11]. Pathogens survive and evade the anti-microbial defense system of the host by subverting the function of these pattern-recognition receptors. Hence, an understanding of the interaction of pathogens with these receptors is essential for the design of approaches to combat infections.

DC-SIGN is a type II membrane protein with a C-type lectin extracellular domain[12]. DC-SIGN plays an important role in establishing the initial contact between DCs and resting T lymphocytes through its recognition of ICAM-3, and mediates DC trafficking through interactions with endothelial ICAM-2[13]. Therefore, DC-SIGN appears to be a critical mediator of the migratory cell and T cell-interacting capabilities. It has been identified that DC-SIGN helps HIV-1 to subvert DC functions and infect the host.

Recently, it was found that DC-SIGN is also an HCV envelope binding receptor and the HCV envelope glycoprotein E2 can bind to DC-SIGN through high-mannose N-glycans[14]. It is becoming increasingly clear that other pathogens including cytomegalovirus (CMV), Ebola, SARS coronavirus, Helicobacter pylori, mycobacterium tuberculosis, Leishmania, schistosoma mansoni, etc, can subvert DC functions to escape immune surveillance[15]. Therefore, investigation of the mechanisms of DC-mediated T lymphocyte priming, tolerance, effector cell migration and function may be helpful in restricting HCV dissemination and infection.