AIM: To study the effects of extract from Ginkgo biloba (EGb) containing 22% flavonoid and 5% terpenoid on chronic liver injury and liver fibrosis of rats induced by carbon tetrachloride (CCl4).

METHODS: All rats were randomly divided into control group, CCl4-treated group, colchicine-treated group and EGb-protected group. Chronic liver injury was induced in experimental groups by subcutaneous injection of CCl4 and fed with chows premixed with 79.5% corn powder, 20% lard and 0.5% cholesterol (v/v). EGb-protected group was treated with EGb (0.5 g/kg body weight per day) for 7 wk. At the end of wk 8, all the rats were killed. Liver function, liver fibrosis, oxidative stress and expression of transforming growth factor β1 (TGF-β1), a-smooth muscle actin (α-SMA) and type I collagens in liver were determined. In addition, pathology changes of liver tissue were observed under light microscope.

Chronic liver diseases commonly result in liver fibrosis and eventually liver cirrhosis. It has been demonstrated that oxygen-derived free radicals (ODFR) and lipid peroxidation play a critical role in the pathogenesis of various liver diseases including hepatic fibrosis[1-3]. Thereby it has become the key to prevent and cure hepatic damage by eliminating free radicals and preventing lipid peroxidation[4-8], and are applied in clinical medicine[9-11].

Extract from Ginkgo biloba (EGb) is an extract from dried ginkgo leaves. EGb could be used in the treatment of asthma and bronchitis. Recent studies have shown that flavonoid (ginkgo-flavone glycosides) and terpenoid (ginkgolides and bilobalides) are the most important active substances in the extract[12]. EGb is well known for its antioxidant property due to its ability to scavenge free radicals and to neutralize ferryl ion-induced peroxidation[13]. Furthermore, EGb can antagonize platelet-activating factor (PAF)[14]. Studies have shown that the antioxidant activity of EGb contributes to the prevention and treatment of diseases associated with oxidative stress[15-19]. These properties of the EGb are thought to provide many beneficial effects against chronic liver damage and liver fibrosis. Therefore, the purpose of this study was to investigate the protective effect of EGb on chronic liver damage and liver fibrosis induced by carbon tetrachloride (CCl4) in rats.

Male Spratgue-Dawley rats weighing 180 to 220 g were purchased from the Experimental Animal Center, Xi’an Jiaotong University Medical School (certification number: Shaanxi 8-005). Fifty-five animals were treated humanely according to the national guideline for the care of animals and divided randomly into four groups. The rats in control group were given common chows, while the rats in the other three groups were fed with chows premixed with 79.5% corn powder, 20% lard and 0.5% cholesterol (v/v). Meanwhile, 3 mL/kg body weight CCl4 (analytically pure, Xi’an Chemical Factory, China) as a solution 40% (v/v) in peanut oil was injected subcutaneously twice a week into the rats of CCl4-treated group, and the first dosage was 5 mL/kg body weight CCl4. The EGb-treated group and colchicine-treated group received EGb (Tianbao Yinxingpian, 19.2 mg flavonoid glycoside in 80 mg EGb of each tablet, Guizhou Xinbang Drug Design Co. Ltd, China) 0.5 mg/kg per day and colchicine (Xi’an Chemical Factory, China), 0.5 g/kg body weight per day. The control group and CCl4-treated group were fed with distilled water.

Rats were sacrificed 7 wk later. Serum or plasma was collected and stored at -20°C for determination. Specimens of isolated rat livers were fixed in formaldehyde and stored in liquid nitrogen.

The activity of glutathoine peroxidase (GSH-Px) and superoxide dismutase (SOD) in plasma was quantified, and the concentration of malondialdehyde (MDA) in plasma was determined as previously described[20].

For histopathological analysis, thin liver slices were cut, fixed in formaldehyde and embedded in paraffin. Five-μm thick sections were then stained with hematoxylin-eosin (HE) and masons trichrome before observed under light microscope. The degree of hepatic fibrosis was determined by a semi-quantitative method[21].

Data were expressed as mean ± SD unless indicated specially, and analyzed by software package SPSS. The Mann-Whitney u test for nonparametric and unpaired values, Student’s t-test or Fisher’s exact test was used as appropriate. P < 0.05 was considered statistically significant.

Effects of EGb on plasma antioxidation in rats

The activities of plasma SOD and GSH-Px were markedly reduced in CCl4-treated group compared with control group, while the content of MDA was significantly increased (P < 0.01). Markers in EGb-protected group were dramatically recovered compared with model group (P < 0.01, Table 2).

Effects of EGb on serum fibrosis

Influence of EGb on degree of liver fibrosis in rats

Effects of EGb on TGF-β1, α-SMA, type I collagen expression in rats with CCl4 -induced injuries 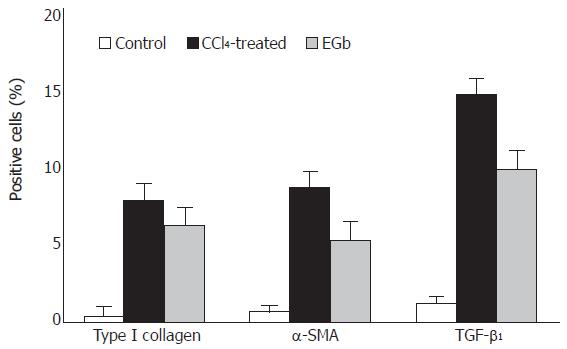 Carbon tetrachloride (CCl4) is widely used to experimentally induce liver damage. Peroxidation of membrane lipids secondary to the formation of trichloromethyl (CCl3 1/2 and /or CCl3OO1/2) radicals is believed to be the basis for the toxic effect of CCl4[22]. These radicals are capable of initiating a chain of lipid peroxidation reactions by abstracting hydrogen from polyunsaturated fatty acids (PUFA). Peroxidation of lipids, particularly those containing PUFA, can dramatically change the properties of biological membranes, resulting in severe cell damage and play a significant role in pathogenesis of diseases. Membrane lipid peroxidation induces crosslinking in proteins. This can be provoked by the MDA generated during PUFA degradation. The two-aldehyde functions of MDA can covalently bind to the free amine functions of proteins and lead to an irreversible polymerization. Oxidative damage can also produce reversible disulfide-bonded polymers resulting from the oxidation of protein tiols. These substances lead to CCl4 hepatoxicity by starting lipid peroxidation in the membranes[23-24].

Standard Ginkgo biloba extract, EGb 761 (commercial name), contains 22%-27% flavonoids (ginkgo-flavone glycosides) and 5%-7% terpenoids (ginkgolides and bilobalides), which are the most important active substances in the extract. The most important flavonoids are glycosides of kaempferol, quercetin, and isorhamnetin with glucose or rhamnose. Ginkgolides, not found in any other living species and only presented in Ginkgo biloba extract, can be divided into types A, B, C, and a very small quantity of J, which are only different in the number and position of hydroxyl groups[12,13,25]. Several mechanisms of action of EGb have been described: vasoregulatory activity and rheological effects, such as decreased iscosity, anti-platelet activating factor activity, and metabolic changes, such as increase neuron tolerance to anoxia, as well as gene- regulatory effects, such as suggesting anticancer activity, and prevention of damage to cell membranes caused by free radicals[13-16,26].

Recent studies have provided considerable support for the in vitro and in vivo protective effects of EGb 761 on ischemia/reperfusion injury or oxidative stress[13,15,19,27]. These effects are closely related to the ability of ginkgo-flavone glycosides, the main component of EGb. It has been reported that flavonoids origin nuclear can reduce hydroxy function group, which could capture oxygen-derived free radicals, such as superoxide anion, hydroxyl and peroxyl radicals, and nitric oxide, act as a donator of hydrogen atom to terminate pathological aggravation of free radical chain reaction and lipid peroxidation, and relieve the injury caused by oxygen-derived free radicals and lipid peroxidation[12,13]. Consequently, it reduces lipid peroxidation. Thus EGb has wide antioxidant effects and can be used in disease treatment[16-19,25,28].

Recent studies indicate that oxidative stress is relevant to the formation of fibrosis in most chronic liver diseases, frequently accompanying decline of anti-oxidation abilities, such as accumulation of lipid peroxidation, descent of anti-oxidase capability, decline of reduced glutathione, which plays an important role in pathologenesis of various liver diseases. Therefore, lipid peroxidation is an important factor, which connects inflammatory injury with hepatic fibrosis. Under the circumstances, we suppose that antioxidant therapy could protect hepatocytes from lipid peroxidation, and prevent or relieve chronic liver damage processes[1-3,22]. Daba et al[22] demonstrated that EGb is a protective agent against lung toxicity induced by BLM treatment. This study showed that the levels of hepatic enzyme indicator MDA were decreased while the serum levels of ALB and the activity of SOD and GSH-Px in the CCl4 plus EGb-protected group were decreased when compared with CCl4-treated group. The findings are similar to the results of Daba et al[22], which further confirmed that EGb can inhibit CCl4-induced lipid peroxidation in plasma and liver tissue and has protective effect on experimental chronic liver damage induced by CCl4.

Hepatic fibrosis is usually initiated by hepatocyte damage, leading to recruitment of inflammatory cells and platelets, activation of kupffer cells and subsequent release of cytokines and growth factors[29,30]. These factors probably link the inflammatory and repair phase of liver cirrhosis by activating hepatic stellate cells (HSC)[31,32]. Recently, HSC have been identified as an important cellular source of extracellular matrix (ECM) in liver fibrosis[33]. These cells reside in the perisinusoidal space of Disse that separates hepatocytes from the sinusoidal endothelium. Upon injury (e.g. by toxins or chronic hepatitis), the normally quiescent HSC are activated and start to proliferate. The activated HSC undergo a phenotypic transdifferentiation to contract myofibroblasts (MFB) expressing α-SMA, and produce an excess of ECM molecules. TGF-β1 is one of the most fibrogenetic cytokines on HSC, and initiates HSC activation characterized by proliferation and expression of α-SMA and ECM[34-36]. It has been shown that lipid peroxidation, free-radical-mediated process, and certain lipid peroxidation products induce genetic overexpression of fibrogenic cytokines (e.g. TGF-β1 and platelet-derived growth factor) and increase the synthesis of collagen. Free radicals and MDA can stimulate the synthesis of collagen and initiate the activation of HSC[37,38]. Our results showed that the expression of TGF-β1, α-SMA and type I collagen in liver, the level of hepatic fibrosis markers in serum and the degrees of fibrosis in liver tissue in EGb-protected group were obviously lower than those in model group, accompanying the decreasing MDA content. These findings suggest that EGb can suppress TGF-β1 expression and TGF-β1-initiated HSC activation, inhibit HSC proliferation and down-regulate α-SMA protein. The antifibrotic effect of EGb may be in part due to its radical scavenging action or antioxidant activity.

In conclusion, EGb is effective against oxidative liver damage and liver fibrosis induced by CCl4, the protective effect may be due to its radical scavenging action or antioxidant activity. Therefore, EGb can be used to prevent and treat hepatic fibrosis. Further investigations on this matter are needed.