AIM: To quantify the circulating DNA in plasma from patients with hepatocellular carcinoma (HCC) and to evaluate its prognostic value.

METHODS: Blood samples were collected from 79 patients with HCC before operation, 20 patients with liver cirrhosis, and 20 healthy volunteers. Circulating DNA was extracted from plasma and quantified. The association between circulating DNA level and prognosis of HCC patients was evaluated.

CONCLUSION: Large or invasive tumor may release more circulating DNA, and higher level of circulating DNA may be associated with poor prognosis of HCC patients.

Hepatocellular carcinoma (HCC) is one of the most common and aggressive malignancies worldwide, and has been ranked the 2nd cancer killer in China since 1990s. The age-standardized mortality rate in China is as high as 34.7/100 000, accounting for 53% of all liver cancer deaths worldwide[1]. Although encouraging long-term survival of HCC patients has been obtained in some clinical centers, recurrence after surgical resection remains one of the major obstacles to further prolonging survival of HCC patients and the overall dismal outcome of patients with HCC has not been completely changed[2,3]. The extremely poor prognosis of HCC is largely due to a high rate of recurrence after surgery or intra-hepatic metastases that develop through invasion of the portal vein or spread to other parts of the liver[4,5].

Identifying biomarker with prognostic significance, especially for predicting recurrence has become an important aspect in HCC study[6]. Since patients with cancers, particularly with high metastatic potential, tend to have higher levels of DNA in plasma, and the molecular biologic findings of circulating DNA in cancer patients are mimicked to those of cancer cells, plasma DNA may be a candidate because of its less invasiveness, simple manipulation, and prognostic information available before operation[7,8]. Few reports have shown the existence of circulating DNA in HCC patients[9-11]. However, the association between circulating DNA level and prognosis of HCC patients is still unclear. In this study, we quantified the circulating DNA in plasma from patients with HCC and evaluated its prognostic value.

MATERIALS AND METHODS
Patients and their clinicopathological characteristics

Seventy-nine patients who received surgical treatment for HCC at Liver Cancer Institute (Zhongshan Hospital) of Fudan University during August-December 2001 were enrolled in this study. The mean age of the patients was 51 years (range 21-83 years). All the patients had a normal liver function preoperatively. All tumors were histopathologically diagnosed as HCC (Table 1). TNM stages of the patients were classified according to the UICC TNM classification of primary liver cancer (6th edition)[12]. All the 79 patients were given informed consent and followed up till January 2005.

Peripheral blood samples (5 mL) were collected from the HCC patients before surgical operation and put into an EDTA tube. Blood samples from 20 patients with compensated liver cirrhosis (histopathologically diagnosed by biopsy) and 20 healthy volunteers were collected as control. The blood samples were centrifuged at 3000 r/min for 10 min to separate buff coats and plasma. An additional centrifugation for 10 min was performed to produce cell-free plasma. Blood samples were then stored at -80°C prior to DNA extraction.

Plasma and control lymphocyte DNAs were extracted with QIAamp® DNA Blood Midi Kit (Qiagen, Hilden, Germany) according to the blood and body fluid protocol of the manufacturer. Two milliliters of plasma was used, a DNA elution volume of 300 μL was obtained after extraction, and 10 μL of plasma DNA was mixed with equivalence 1:3000 SYBR green I (fluorescence dye). The mixture was analyzed by ultraviolet transilluminator system and photographed under stimulating wave of 345 nm and absorbing wave of 500 nm. The diagram was analyzed by software system to read its intensity[13]. The quantity of plasma DNA was calculated by regression equation which was established by intensity of standard DNA content.

Results were expressed as mean ± SD. Fisher’s exact test was used to compare qualitative data. P < 0.05 was considered statistically significant. Continuous variables were transformed into dichotomous variables before survival analysis. Student’s t-test was used for mean comparisons. Patients’ survival was calculated from the data of operation to the data of death or to the data of point. Survival curves were estimated according to the method of Kaplan-Meier and compared with a log-rank test. To identify the factors that might be of independent significance in influencing the disease-free survival (DFS) or overall survival (OS), a Cox stepwise proportional risk regression model was fitted. All statistical analyses were performed with Stata (version 7) statistical software. 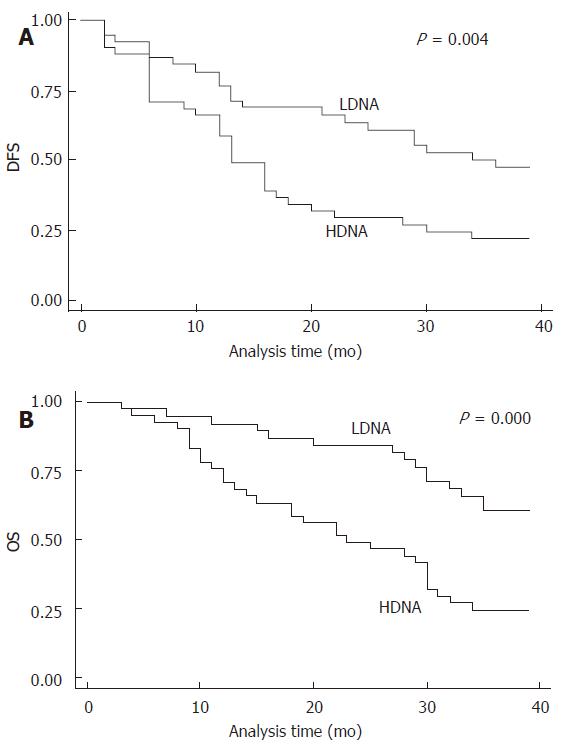 The first discovery of extracellular nucleic acids in the circulation was reported in 1948 by Mandel and Métais[15], who demonstrated the presence of both DNA and RNA in the plasma of healthy and sick individuals. This work was particularly remarkable as it was reported only 4 years after the demonstration of DNA as the material of inheritance[16], and it even preceded the landmark paper by Watson and Crick[17] on the double helical structure of DNA. However, their work did not attract much attention, and further development of the field had to wait some 30 years until Leon[18] showed that cancer patients have much higher concentration of circulating DNA than those with non-malignant disease, which is decreased in some cases after anti-cancer therapy. Since then, several follow-up studies have been done to establish the possible value of free circulating DNA as a prognostic factor in patients with pancreatic carcinoma[19], esophageal adenocarcinoma[20], lung cancer[21], melanoma[22] and nasopharyngeal carcinoma[23].

Both plasma and serum samples have frequently been used in the analysis of cell-free DNA. Of particular interest is that the concentrations in serum samples are significantly higher than those in matched plasma samples, which is mainly generated in vitro by lysis of white blood cells, suggesting that serum is not suitable for monitoring the concentration of cell-free DNA[24]. A recent work performed a quantitative comparison of matched serum and plasma DNA in patients with colorectal liver metastases and found that serum and plasma DNA level is not correlated with colorectal liver metastases. Furthermore, while serum DNA is significantly associated with the presence of metastases, only plasma DNA is predictive of recurrence, indicating that serum DNA might represent an indirect but tumor-related process, and that plasma DNA better reflects the in vivo levels of circulating DNA[14]. Different blood processing protocol may also influence the level of circulating DNA[25]. The plasma obtained by centrifugation alone at various speeds, without subsequent microcentrifugation, has been shown to have substantial amounts of cellular components which may led to the detection of aberrantly high total concentrations of plasma DNA[26]. Therefore, in our study, an additional centrifuge for 10 min was performed to produce cell-free plasma. In order to exclude interference of cell death caused by hepatitis or liver resection, normal liver function test is required for patients’ blood sample collection before operation.

In conclusion, circulating DNA in liver cancers opens a new research area and eventually be comes a suitable source for development of noninvasive diagnostic methods for HCC.