AIM: To investigate the effects of hyperlipidemia on acute pancreatitis (AP) and the possible mechanisms.

METHODS: Rat models of hyperlipidemia and AP were established by Triton WR1339 and cerulein respectively. Human albumin was used to treat AP complicated by hyperlipidemia. In each group, we compared the histological score, volume of ascites, ratio of pancreatic wet/dry weight, serum amylase (AMY) and pancreatic acinar cell apoptosis. The level of protein kinase C (PKC) membrane translocation in pancreatic tissue was detected by Western blot.

CONCLUSION: Hyperlipidemia may induce AP or intensify pancreatic injury. Albumin therapy can not alleviate pancreatic lesion effectively. PKC activation may be one mechanism by which AP is intensified by hyperlipidemia.

Acute pancreatitis (AP) is a common disease that normally runs a benign course in the majority of patients. However in up to 20% of individuals the disease is severe and may be associated with a mortality of about 20%[1,2]. Since Speck in 1865[3] noted the association between hyperlipidemia and AP, their relationship has been studied by many scholars. Currently, hyperlipidemia is another main cause of AP besides cholelithiasis and alcohol abuse[4]. Serum triglyceride (TG) levels higher than 1000 mg/dl seem to be a serious factor for developing AP, particularly in patients suffering from familial hyperlipidemia (types 1, 4 or 5 according to Fredrickson’s classification). AP occurs with an incidence of up to 21%[5,6]. Hydrolysis of TG by pancreatic lipase with the local release of large quantities of free fatty acids (FFAs) has been proposed as the pathogenic mechanisms. Hyperlipidemia is a common cause of AP. Moreover, lipid levels increase above normal in up to 50% of patients with AP of any cause[7].

Several studies in humans and animals have been performed to evaluate hyperlipidemia as a risk factor for developing AP. However, there is no ideal animal model of hyperlipidemic AP. Information about the influence of hyperlipidemia on the course of AP is relatively rare. The majority of investigators considered that hyperlipidemia can intensify the pancreatic lesion and systemic inflammatory response. Saharia et al[8] perfused the pancreas preparations with TG and FFAs (oleic acid) and found that they can lead to edema of the isolated pancreas, weight gain, and elevation of serum AMY. The injury caused by FFAs is similar to that seen with TG infusion, but it occurs more rapidly. These studies add support to the concept that hypertriglyceridemia can initiate pancreatic injury and the release of FFAs may be the mechanism. Kimuru et al[9] initiated an AP model with cerulein, retrograde duct injection of sodium taurocholate, bile/pancreatic duct respectively and found that the isolate pancreatic damage is increased by TG perfusion. However, some reports suggest that hyperlipidemia could not aggravate the course of AP. Paye et al[10] prepared an AP model with cerulein and injected TG simultaneously, and found that histological alterations, pancreatic enzyme level and ascites in these models do not differ from those in AP patients without TG injection. To approve this result further, the authors collected very low density lipoprotein (VLDL) from AP patients and found that the VLDL intravenous infusion for hypertriglyceridemia does not alter the course of AP[11]. Therefore the role of hyperlipidemia in acute pancreatitis seems questionable.

The mechanism by which hyperlipidemia leads to AP is still unclear. A well-accepted mechanism proposed by Havel et al[12] is that unbound FFAs are toxic and could produce acinar cells or capillary injury. Increased concentration of chylomicrons in pancreatic capillaries causes capillary plugging and leads to ischemia and acidosis. FFAs can induce activation of trypsinogen and initiate AP. Recently, it was reported that FFAs are toxic to pancreatic β-cells leading to diabetes and insulin resistance syndrome. The toxicity is associated with abnormalities in the insulin signaling cascade and may be mediated by FFA activation of protein kinase C (PKC)[13]. Also, there is abundant PKC in pancreatic acinar cells[14]. Other similar mechanisms of FFAs may damage acinar cells.

The aim of the present work was to determine whether endogenous hyperlipidemia aggravates in vivo cerulein-induced edematous AP and activates PKC in pancreas of rats.

Male Sprague-Dawley rats, weighing 250-270 g were used. Experiments were performed in accordance with the National Institutes of Health Guide for the Care and Use of Laboratory Animals. The rats were maintained at 23 °C in a 12 h light dark cycle, with free access to water and standard rat chow. The rats were fasted for 12 h prior to the experiment, but with free access to water. They were anesthetized with chloral hydrate (300 mg/kg intra-peritoneal injection). Body temperature was monitored and maintained at 37.5 ± 1 °C using a heating device.

Three and six hours after induction of AP, the rats were sacrificed by aortic puncture and blood samples taken for plasma biochemical measurements. A complete macroscopic examination of the peritoneal cavity and ascites was immediately performed, and the pancreas was removed using a standardized monobloc surgical technique. The pancreas was divided into three parts. The pancreatic head was fixed in Bouin’s solution, embedded in paraffin, sliced, and stained with hematoxylin and eosin. The pancreas body was put into liquid nitrogen for PKC analysis. To better estimate the amount of edema, the remaining pancreatic tissue was weighed and dessicated for 24 h at 173 °C to measure its dry weight. We used the wet to dry ratio to quantify edema formation.

Recent studies indicate that mild acute pancreatitis is related to the extent of acinar cell apoptosis[21-23]. A pancreatic tissue section was prepared and assayed with the in situ cell death detection kit, POD (Boehringer Mannheim, Germany) following the manufacturer’s instructions. Slides were counterstained with hematoxylin and viewed under a light microscope.

PKC activation was determined in both cytosolic and particulate fractions as previously described[24]. Frozen pancreatic tissue(50 mg) was rapidly thawed and homogenized at 4 °C in lysis buffer A (mM: Tris-HCl 50; pH 7.4; NaCl 150; EDTA 2; EGTA 2; DTT 2; Na pyrophosphate 5; KF 50; PMSF 1; 1μg/mL: Aprotinin, Leupeptin,Pepstatin A). Homogenates were centrifuged at 100 000 r/min for 30 min at 4 °C in an Optima TLX ultracentrifuge to yield cytosol. The pellet fractions were resuspended in 100 μL of buffer A containing 0.5% Nonidet P-40, sonicated and centrifuged again. The resulting supernatants taken as the particulate fractions with the cytosolic fractions were assayed for PKC immunoreactivities. Throughout the study, protein concentrations were determined by the Lowry’s method with bovine serum albumin as standard. Aliquots of the cell lysates containing 100 g of total protein were resolved in 10% SDS-PAGE and transferred to PVDF membranes (Amersham Biosciences, Inc.). The membranes were blocked in TBS-Triton-X 100 (0.2% v/v, pH 7.4) containing 5% milk for 2 h at room temperature followed by incubation with PKC antibody at the dilution described by manufacturer’s instructions at 4 °C overnight. The membranes were incubated with anti-goat horseradish peroxidase complex (diluted 1:2000) for 2 h at room temperature. The proteins on the membranes were exposed to X-ray films at multiple time points and visualized by ECL detection system (Amersham Biosciences, Inc.).

RESULTS
Changes of serum lipid, AMY and pathology of pancreas in C(tri) group

The animals receiving 100 mg/kg and 400 mg/kg Triton WR1339 had high TG and TCH. The serum TG increased most obviously and reached its peak 6 h after Triton WR1339 infusion with induction of chylomicronemia (Figure 1). The TG value increased 10-fold and 20-fold after 100 mg/kg and 400 mg/kg Triton WR 1339 infusion respectively, whereas the serum TCH increased only 2-fold and 3-fold (Figure 2). The serum AMY activities did not significantly increase after induction of hyperlipidemia (P > 0.05). The animals did not demonstrate ascites and pancreatic edema in macroscopy. Nine rats (9/12) showed mild pancreatic edema, whereas no histological changes occurred in the saline-treated animals (group C(sal)). 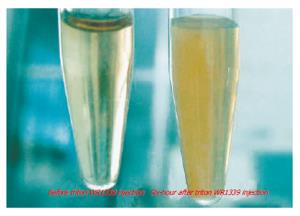 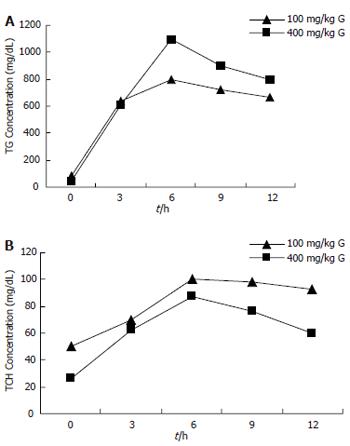 Figure 2 Curves of serum TG and TCH induced by Triton WR 1339 in rats.
Effects of hyperlipidemia on pancreatic histology in AP rats

The pancreatic changes included interstitial edema, increased interlobular interstice and infiltration of some inflammatory cells in the animals 3 h after cerulein infusion. The pancreas of AP animals 6 h after cerulein injection had serious edema with tensioned capsules and separated small lobuli. Wide lobular and acinar interstices, anamorphic acinar structure, intracytoplasmic vacuolization and infiltrated inflammatory cells were observed (Figure 3). After 3 h, the pancreatic damage was intensified in the animals of group HAP，and some apoptotic bodies (inclusion) and more inflammatory cells appeared. There were scattered erythrocytes and inflammatory cells, distended small veins in the pancreas 6 h after HAP model was induced (Figure 3). There were no pathological changes after albumin therapy. 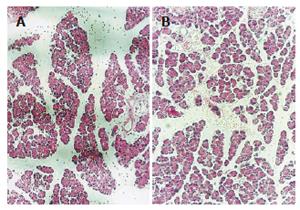 The serum TG and TCH concentration increased 1-2 folds in the cerulein-induced AP animals. There were no statistical differences between group AP and group C(sal) (P > 0.05). The hyperlipidemic AP animals had significantly higher serum TG and TCH values than the rats receiving Triton WR1339 (group C(tri)) injection. The serum TG and TCH concentration in the animals with albumin therapy (group THAP) decreased slightly. The AMY activities in the hyperlipidemic group C(tri) remained unchanged throughout the investigation, and increased obviously (P < 0.05) in the AP group. In comparison with the AP group, the AMY values of group HAP and THAP were significantly higher (P < 0.05). This result demonstrated that AP could induce mild hyperlipidemia. Albumin could not decrease the circulating lipid and AMY concentration (Table 2).

Apoptosis of pancreatic cell in rats 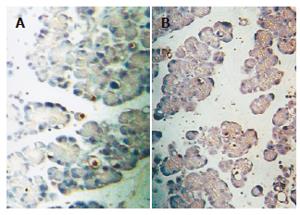 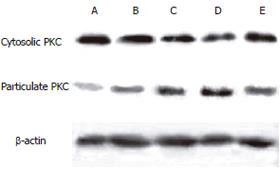 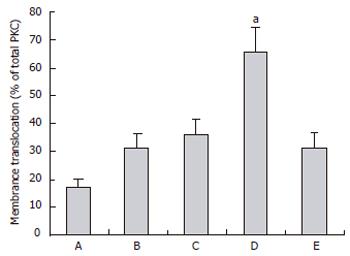 Hypertriglyceridemia is an etiological factor in patients with AP while TG level exceeding 1000 mg/dL or lactescent serum is a necessary condition for hyperlipidemic AP diagnosis[26]. Triton WR1339 could increase serum TG and is an ideal drug to establish hyperlipidemic animal model with TG elevation.