Colonic varices are a very rare cause of lower gastrointestinal bleeding. Fewer than 100 cases of colonic varices, and 30 cases of idiopathic colonic varices (ICV) have been reported in the English literature. Among these 30 cases of ICV, 19 cases were diagnosed by angiography, and 7 operated cases were diagnosed later as ileocecal vein deficit, hemangioma, and idiopathic in 1, 1, 5 cases, respectively. We report the case of a 24-year-old man who suffered from multiple episodes of hematochezia of varying degree at the age of 11 years. He had severe anemia with hemoglobin of 21 g/L. On colonoscopy, tortuously dilated submucosal vein and friable ulceration covered with dark necrotic tissues especially at the rectosigmoid region were seen from the rectum up to the distal descending colon. It initially appeared to be carcinoma with varices. Mesenteric angiographic study suggested a colonic hemangioma. Low anterior resection was done due to medically intractable and recurrent hematochezia. Other bowel and mesenteric vascular structures appeared normal. Microscopic examination revealed normal colonic mucosa with dilated veins throughout the submucosa and serosa without representing new vessel growth. Taken all of these findings together, the patient was diagnosed as ICV. His postoperative course was uneventful.

A 24-year-old man was admitted to hospital with exertional dyspnea and weakness. He had a 13-year history of multiple episodes of hematochezia of varying degree. At age 22, he visited our hospital due to dizziness. He denied alcohol consumption, or any family history of gastrointestinal bleeding. He had severe anemia with hemoglobin of 27 g/L. After 2-unit blood transfusion, he refused further investigations or management. 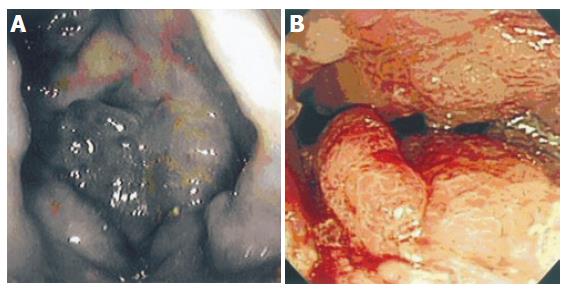 Figure 1 Colonoscopy view of colonic varices at the rectosigmoid region. 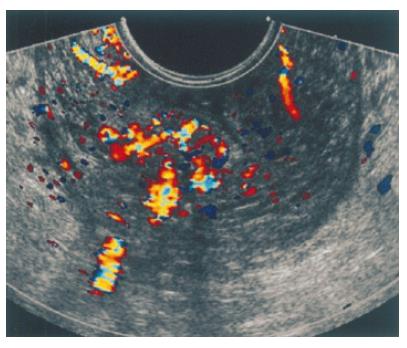 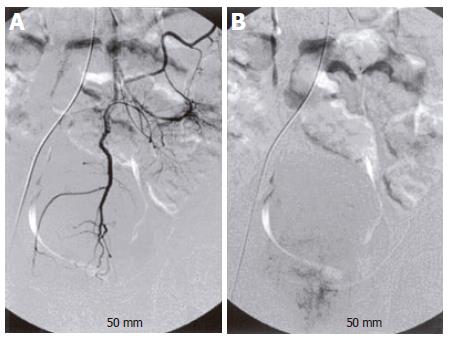 Figure 4 Selective angiography of superior and inferior mesenteric artery showing normal arterial phase (A) and venous pooling in rectum in the delayed phase (B).

Low anterior resection was done due to medically intractable and recurrent hematochezia. During surgery, tortuously dilated subserosal and mesenteric vessels were seen at the rectum, sigmoid colon and distal descending colon (Figure 5A). Other bowel and mesenteric vascular structures appeared to be normal. Microscopic examination revealed normal colonic mucosa with dilated veins throughout the submucosa and serosa without new vessel formation (Figures 5B and 5C). In addition, thrombi were frequently observed in the endovascular lumen, and dystrophic calcification was also often found in the wall of vessels. He remained well showing no further signs of gastrointestinal hemorrhage at the time when he was reported in this paper.

Figure 5 Dilated subserosal veins seen in operation (A), great enlarged vessels observed in submucosal and serosal layer at low power, HE×10 (B), and distortion of vascular wall found in enlarged vessels at high power, HE×40 (C).
DISCUSSION

The varix is a descriptive term of enlarged and convoluted vein, artery or lymphatic vessel, which does not indicate the etiology of them. Establishing the diagnosis of ICV amid various factors remains difficult. It needs to exclude secondary causes by laboratory and imaging studies, such as liver function test, hepatitis serology, and liver sonography or computed tomography. Diagnosis of ICV usually requires angiography with visualization of the enlarged vessels showing prolonged observation of the venous phase but no portal/mesenteric vein obstruction[3,5]. Gross examination and biopsy under laparoscope or exploration can definitely confirm ICV.

We fully reviewed 30 cases reported as ICV. Hemangioma and vascular malformation are described as ICV in some of these reports[2,3,18,19]. But hemangioma has obviously different pathologic findings, and vascular malformation has plainable etiology. So, in our opinion, hemangioma and vascular malformation can be ruled out from ICV. According to these, 21 reports containing 25 patients remain to be idiopathic[4-17,20-23]. In more than half of the cases, the total colon is affected[6-9,14-16,20-22], and in segment-involved cases, the lesions are distributed equally between right and left colon. About 30% of these have familial tendency[8-11,14-16,20,21] and more than half of these manifest the onset of hematochezia before the third decade[9-13,15-17,22], suggesting that ICV may be congenital in origin. But the number of the cases is too small to conjecture the inheritance pattern of ICV. Angiography has been performed in only 19 cases[3-19]. Before angiography, two of these cases, suspected to be ICV, were diagnosed as congenital anomaly of the portocaval system[2] and hemangioma[3]. 7 cases which were surgically confirmed, were diagnosed as congenital failure of ileocecal vein[18], hemangioma[19], and ICV[15-17,19,20] in 1, 1, 5 cases, respectively.

ICV is usually accompanied with recurrent and massive rectal bleeding. It is presumed that bleeding from colonic varices is the result either of abrasion from hard stool in the distal colon, or of pressure ischemia and sloughing of the overlying mucosa in the cecum[16].

The barium contrast enema may be helpful, but is often misinterpreted as air bubble, fecal material, polyposis, carcinoma, or as normal[12]. Therefore, it is unreliable. Colonoscopy is more sensitive, but collapse of varices by excessive air inflation can make the physician to mistake ICV as normal condition. ICV can mimic polyp, cancer, and ulcerative colitis. Biopsy may induce massive hemorrhage[15].

Scintigraphic studies have not been found to be adequate in localizing the segment of colon associated with bleeding varices but can detect hemorrhage with greater sensitivity than angiography[25].

Mesenteric angiography is a most accurate radiologic diagnostic tool, but secondary colonic varices could be misinterpreted as an ICV on angiography. Defreyne et al[24] have explained that angiographical diagnosis is in disagreement with the histopathological diagnosis of an arteriovenous malformation probably because the blood passage through the small fistulas is too slow. The same principle can be applied to our case. In about 30% cases, operation revealed secondary causes or changed histopathologic diagnosis as previously described[15-21], suggesting that angiography is an incomplete tool to confirm ICV. Laparoscopy may be a more accurate and definitive diagnostic tool than histology, because histological tissue sampling is very dangerous if not in operation.

The prognosis of ICV seems to be good at all ages compared with cirrhotic varices, which may be related to low pressure in the varices as well as the absence of significant hepatocellular disease[5]. Conservative therapy is sufficient for most ICV patients. Patients with intractable and persistent bleeding may require partial colectomy for involved area.

In conclusion, it is very difficult to diagnose ICV as in our case. The most important thing is to role out secondary causes of varices. In the suspected case, the physician should consider the clinical, radiologic, and surgical information collectively for the proper diagnosis. This case report describes a life-threatening bleeding episode of ICV, mimicking carcinoma in colonoscopy and hemangioma in angiography. ICV can be confirmed by surgical histopathogy, and successfully treated with partial colectomy on involved area.