We report the remission of primary gastric lymphoma of the mucosa-associated lymphoid tissue (MALT) type in two immunocompromised pediatric patients. Patient 1, a 14-year-old boy in an immunocompromised state of unknown cause, complained of repeated abdominal pain. Examinations revealed gastric MALT with local invasion and lymph node involvement. Serum anti-Helicobacter pylori (H pylori) antibody was positive. H pylori eradication was abandoned due to its adverse effects. The MALT lesion spontaneously regressed over the next 24 months without any treatment for lymphoma. Patient 2, a 6-year-old boy, underwent cord blood transplantation for the treatment of adrenoleukodystrophy. He was administered immunosuppressants for graft-versus-host disease after transplantation. Nausea and hematochezia appeared and further examinations revealed gastric MALT with H pylori gastritis. Treatment consisting of medication for the H pylori infection alone eradicated the H pylori and completely resolved the patient’s MALT lesion, as well. Patients 1 and 2 were followed up over periods of 10 years and 3 years, respectively, without any signs of relapse. In conclusion, gastric lymphoma of the MALT type can be cured by conservative treatment even in immunocompromised pediatric patients.

A 14-year-old boy complained of repeated abdominal pain. Upper gastrointestinal endoscopy revealed a tumor-like lesion in the stomach and the patient was referred to our hospital. The patient had a history of autoimmune hemolytic anemia at the age of 1 year and measles infection at 2 years. Thereafter, he developed systemic lymphadenopathy and hyper-gamma-globulinemia. He had been administered oral prednine from the age of 5 years onward based on a putative diagnosis of immunoblastic lymphadenopathy.

A tender mass, hen-egg in size, was discovered in the epigastrium upon admission. Endoscopy revealed a polypoid lesion in the posterior wall of the lower corpus of the stomach. The mass was diagnosed as a low-grade gastric lymphoma of the MALT type based on examination of a biopsy specimen (Figure 1). The biopsy also confirmed an invasion to the duodenum. Both computed tomography and Gallium scintigraphy strongly suggested metastases to the para-aortic lymph nodes (Figure 2).

Figure 1 Mucosa-associated lymphoid tissue lymphoma in Patient 1. A: A polypoid lesion on the posterior wall of the lower corpus of the stomach, suggesting the existence of lymphoproliferative disease; B: The histological features show characteristic appearance of low-grade gastric lymphomas of the mucosa-associated lymphoid tissue type with a diffuse infiltrate of centrocyte-like cells and the formation of lymphoepithelial lesions (H & E, original magnification x10). 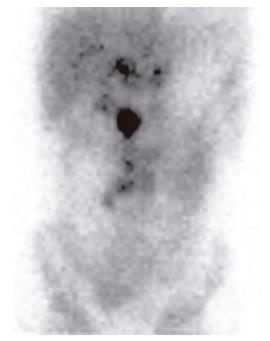 Figure 2 Gallium scintigraphy in Patient 1 shows an abnormal accumulation of the nuclide in the para-aortic lymph nodes.

Fearing that a complete, en bloc removal of such an advanced tumor would be too invasive in an immunocompromised patient, the authors opted for a watch-and-wait strategy. The patient’s serum was positive for anti-H pylori antibody, but H pylori eradication had to be abandoned due to its adverse effects. Thankfully, the MALT lesion spontaneously regressed over the next 24 mo without any treatment for lymphoma (Figure 3). As the MALT lesion grew less serious, an abdominal pain gradually disappeared. The patient has been followed up for 10 years and continues to do well with no signs of relapse as of this writing. 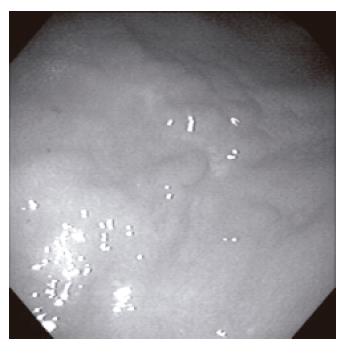 A 6-year-old boy was referred to our department with a complaint of nausea with hematochezia. He had been diagnosed with adrenoleukodystrophy at the age of 5 years and underwent cord blood transplantation for the treatment of the condition at that time. After the transplantation he was administered oral immunosuppressants, including methylprednisolone and FK506, for graft-versus-host disease.

Upper gastrointestinal endoscopy revealed an ulcerated lesion in the anterior wall of the upper corpus of the stomach. The mass was diagnosed as a low-grade gastric lymphoma of the MALT type associated with H pylori gastritis, based on an examination of a biopsy specimen (Figure 4). Neither local invasion nor lymph node involvement was present on diagnostic modalities. When the dosages of the immunosuppressants were tapered he was additionally treated for the H pylori infection using a proton pump inhibitor combined with clarithromycin and amoxicillin according to international guidelines[8]. The treatment not only eradicated the H pylori, but brought about a complete remission of the MALT lesion as well (Figure 5). The patient has been followed up for 3 years and continues to do well without any signs of relapse as of this writing. 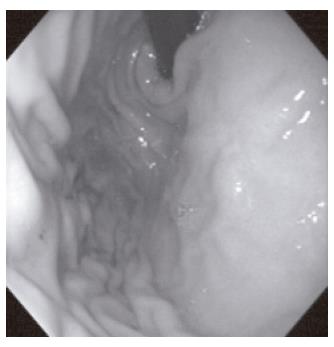 Figure 5 Two months after eradication therapy in Patient 2, an area of glossy whitish mucosa appeared at the site previously occupied by the low-grade gastric lymphoma of the mucosa-associated lymphoid tissue type.
DISCUSSION

Primary low-grade gastric B-cell lymphoma of the MALT type is generally defined as an extranodal lymphoma characterized by an infiltration of the mucosa by centrocyte-like B-cells with formation of lymphoepithelial lesions[9]. Gastric lymphoma of the MALT type is thought to be derived from chronic gastritis caused by H pylori[2-4]. H pylori infection has been documented in up to 90% of patients with low-grade gastric lymphoma of the MALT type. At first, it has been believed that the MALT acquired in response to H pylori infection provides the background on which unidentified factors act and then lead to the development of lymphoma. However, the immune response of B-cell lymphomas of MALT type to H pylori antigen is proved to occur only with the presence of T cells on the culture[10,11]. Furthermore, the cellular proliferation of low-grade gastric B-cell lymphomas of MALT type to H pylori seems to be dependent on H pylori-specific T cells and their products, rather than the bacteria themselves[11]. The inhibitive action against such a mechanism would break down in immunocompromized state so that B-cell lymphomas of MALT type may develop even in H pylori infected children.

H pylori eradication is now established to be effective in reducing primary gastric lymphomas of the MALT type and is well accepted as an initial therapy for patients with localized low-grade gastric lymphomas. Remission rates in the recent literature range from 60% to 80%, though recurrence can be expected in some 5% of cases[12-15]. As described above, authors addressed the contributions of the persistent exposure to H pylori antigen and the presence of H pylori-specific T cells in the pathogenesis of lymphomas of MALT type. With the eradication of H pylori, chronic inflammation decreases and the density of submucosal lymphocytes dramatically declines[7]. Thus, the cessation of exposure to H pylori antigen due to either the spontaneous cure of H pylori or the result of the eradication might progress the tumor regression through the immunologic response.

The major negative predictive factor of tumor response to anti-H pylori treatment in patients with primary low-grade gastric lymphoma of the MALT type is involvement of the regional lymph nodes. The depth of the tumor infiltration in the gastric wall correlates with the involvement of the regional lymph nodes and with the degree of tumor malignancy[16-18].

Primary gastric lymphoma of the MALT type has been documented in liver, heart, and kidney transplant recipients[19-22]. The development of these post-transplantation lymphomas of the MALT type appears to be closely related to the abnormal response of the dysregulated host immune system. Post-transplantation lymphoma of the MALT type is also associated with H pylori infection and is usually of an Epstein-Barr Virus-negative, B-cell origin. A combination of treatments to minimize immunosuppression and eradicate H pylori frees most patients from disease[21-23].

Primary gastric malignant tumors are very rare in children, as are most lymphomas. The majority of primary gastric lymphomas are high-grade non-Hodgkin’s

lymphomas of B-cell origin. To our knowledge, the literature has not reported significant numbers of primary gastric lymphomas of the MALT type in children[7,24-26]. The clinicopathological features in pediatric cases are considered to be similar to those observed in adults.

In this report we have described the complete remission of primary gastric lymphomas of the MALT type in two pediatric patients under an immunocompromised state. In patient 1, an advanced gastric lymphoma of the MALT type with duodenal invasion and lymph node involvement regressed spontaneously without any treatment. This experience prompts us to question whether regional lymph node involvement is a negative predictive factor of the tumor response, as described above. Anti-H pylori treatment with minimization of immunosuppression was satisfactory in our second patient. To the best of our knowledge, patient 2 is the first reported case of primary gastric lymphoma of the MALT type occurring in a post-cord blood transplantation setting.

In conclusion, the authors propose that low-grade gastric lymphoma of the MALT type can be cured by conservative treatment even in immunocompromised pediatric patients. A watch-and-wait strategy combined with H pylori eradication and close follow-up should be an option before attempting more aggressive treatments, even in cases with advanced disease.