AIM: To conduct a retrospective study to determine the risk factors for development of metaplastic gastritis in Korean population.

METHODS: The database of 113 449 subjects who underwent a gastroscopy for the purpose of a regular check-up at center for health promotion, Samsung medical center during 5 years was collected and retrospectively analyzed. Among them, 5 847 subjects who had endoscopically diagnosed as a metaplastic gastritis or 10 076 normal as well as answered to questionnaire were included for present study. The subjects were divided into 2 groups; Group I, normal and Group II, metaplastic gastritis. Age, gender, Helicobacter pylori (H pylori) seropositivity, body mass index (BMI), family history of cancer, smoking, alcohol consumption, total daily calories, folate and salt intake and dietary habit (out-eating, overeating, irregular eating) were retrieved from questionnaire or electronic medical record and compared between group I and group II.

The purpose of this paper was to determine the risk factors for development of metaplastic gastritis, precursor of gastric cancer in Korean population

The database of 113 449 subjects who underwent a gastroscopy for the purpose of a regular check-up at center for health promotion, Samsung medical center from January 2001 through June 2004 was collected and retrospectively analyzed. Among them, 13 578 subjects were endoscopically diagnosed as a metaplastic gastritis and 10 521 subjects was endoscopically diagnosed as a normal. But, only 5 847 subjects who had endoscopically diagnosed as a metaplastic gastritis were answered to questionnaire whereas 10 076 subjects who had endoscopically diagnosed as a normal were answered to questionnaire. Both 5 847 metaplastic gastritis and 10 076 normal were included for present study. Subjects with peptic ulcer or erosion of stomach were excluded in this study population. The subjects were divided into 2 groups; Group I, normal and Group II, metaplastic gastritis. Demographic data [age, gender, body mass index (BMI), family history of cancer] and life style data [smoking, alcohol consumption, total daily calorie intake, folate intake, salt intake, dietary habit (out-eating, overeating, irregular eating)] were retrieved from questionnaire or electronic medical records and compared between group I and group II. Those who have family history of any cancer were those who had a reply to yes in the question (“Do you have a blood relation who has a experience of diagnosis as cancer by a doctor”). Data including smoking, alcohol consumption (frequency and amount of alcohol), dietary habit (out-eating, overeating, irregular eating) were collected from self administered questionnaire. Patients were asked whether they were active, past or never smoker. The subjects were divided into two groups (current smoking group and non-smoking group) by current smoking status. Nonsmoking group is composed of past or non-smoking. The subjects were divided into two groups by frequency and amounts of liquors (namely, so-ju) consumption in questionnaire. Over or equal 3-4 frequencies a week and ≥ 80 g once alcohol consumption is defined as the group of heavy alcohol consumption. Below 3-4 frequencies a week or < 80 g once alcohol consumption is classified as the other group. Total amount of calorie, folate intake and fat intake were obtained in diet surveys. Helicobacter pylori (H pylori) seropositivity was retrieved from electronic medical record. H pylori infection was determined by measuring serum H pylori IgG antibodies. Specific anti- H pylori antibodies were measured with an enzyme-linked immunosorbent assay (ELISA) kit using an antigen (RADIM SpA, Pomezia, Italy). The sensitivity and specificity of this assay was reported to be 79% and 83%, respectively[4]. 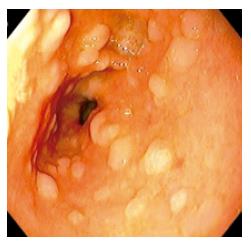 The prevalence of group II was 11% (13 578/113 449) increasing its prevalence with age (P = 0.000). But, there was no significant association between 2 groups in BMI, alcohol consumption and family history of cancer. Male gender was a risk factor for metaplastic gastritis and current smokers were more likely to have metaplastic gastritis than none or past smokers. Neither dietary composition (folate, salts, calories) nor dietary habits (out-eating, overeating, irregular eating) was associated with metaplastic gastritis. H pylori seropositivity was more common in the group II.

In the early 1970s, Correa formulated a multi-step model of gastric cancer, which postulated a sequence from chronic atrophic gastritis, intestinal metaplasia, dysplasia and gastric cancer[2]. Chronic gastric inflammation leads to repetitive injury and repair resulting in hyperplasia[3]. Whereas acute injury and inflammation associated with healing are usually self-limited, chronic injury or inflammation leads to a sustained expansion of tissue proliferation[7-10]. Sustained tissue proliferation is generally accepted as a risk factor for cancer[3]. As is well known, metaplastic gastritis is precursors of gastric cancer.

Our understanding of gastritis and cancer underwent a marked shift with rediscovery of H pylori[7-13]. H pylori is now thought to account for most of gastritis[13] whereas H pylori infection is not an only important factor for development for gastric cancer[5]. But, it is not clear whether H pylori infection is also important for development for metaplastic gastritis. Our study demonstrated that H pylori seropositivity is an independent risk factor for the metaplastic gastritis.

In the intestinal type of gastric cancer, environmental factors other than H pylori infection seem to play a part in the carcinogenesis[12]. Environmental factors may facilitate the development of atrophic gastritis and intestinal metaplasia[12,14]. Based on epidemiologic studies of dietary histories, the first step in the Correa pathway was believed to be initiated by a diet rich in salt and nitrates/nitrites as well as deficiencies in fresh fruits and vegetables[5]. Dietary factors and continued effects of chronic inflammation were felt to be responsible for the progression from gastritis to atrophy, metaplasia, dysplasia and carcinoma[12]. Ingestion of sodium chloride is thought to promote gastric carcinogenesis[14]. Exposure to N-nitroso compounds probably facilitates advancement of chronic atrophic gastritis and intestinal metaplasia in adulthood[5]. Our study showed that neither dietary habits, salts nor folate intakes is a risk factor for the metaplastic gastritis. The major limitation of our study is that diet survey used in our study is carried out by not-validated questionnaire.

First, the limitation of present study is selection-bias. The substantial numbers of subjects did not have information about all items of the questionnaire. Numbers of subjects entered into the multiple logistic regression model were 4 438 (4 438/13 578, 32%) in group II and 3 483 (3 483/10 521, 33%) in group I. The other limitation of our study is inter-examiner or intra-examiner bias of endoscopic diagnosis about metaplastic gastritis and normal. To ascertain the precision in endoscopic diagnosis of gastritis, we undertook a pilot study on 10 individuals. Endoscopic finding was obtained 2 times on 10 individuals by 2 examiners. We examined the inter-examiner bias between 2 examiners and intra-examiner bias between 2 examinations by same examiner. Kappa value of intra-examiner was 1.0 (P = 0.002), 0.737 (P = 0.016), respectively. Kappa value of inter-examiner was 0.875 (P < 0.001).