METHODS: Hematological changes and changes of lymphocyte subpopulations were detected in Smad3-/- mice using cell counter and flow cytometry, respectively, and compared to their littermate controls.

CONCLUSION: These observations suggest that the changes of lymphocyte subpopulations might play a role in susceptibility to inflammation of Smad3-/- mice.

TGF-β plays an important role in maintaining immune homeostasis. It signals through a set of transmembrane receptor serine/threonine kinases unique to the large superfamily of TGF-β related proteins [1]. As a downstream cytoplasm signaling element of TGF-β receptors, Smad3 mediates a positive signal pathway from the receptor serine/threonine kinases to the nuclei [2]. Previous reports revealed Smad3 plays an important role in mediating TGF-β signal in T lymphocytes and neutrophils, and demonstrated that Smad3 deficiency results in immune dysregulation and susceptibility to opportunistic infection [3].

The immune system discriminates between self and non-self, establishing and maintaining unresponsiveness to self. There is clear evidence that clonal deletion of self-reactive T and B cells is a major mechanism of self-tolerance [4]. However, the fact that potentially hazardous self-reactive lymphocytes are present in the periphery of normal adult individuals [5] reveals that the mechanisms that can prevent pathological autoimmunity exist. In recent years, a burst of papers are focused on a population of CD4+ T cells that constitutively express the IL-2Rα (CD25) T cells and reveal them as key “actors” to self-tolerance[6,7]. A direct experiment to assess the regulatory role of CD4+CD25+ T cells in self-tolerance reported that the adoptive transfer of CD4+CD25+-depleted T cells could induce several organ-specific autoimmune diseases in immunodeficient animals [8]. CD4+CD25+ T cells also regulate antibody responses against self- and non-self-antigens by direct inhibitory effects on B cells or via inhibition of Th cell differentiation [9,10]. In addition to self-tolerance and autoimmunity, there is evidence that CD4+CD25+ T cells are actively engaged in negative control of a broad spectrum of immune responses induced by microbial infection [11-13]. They can also mediate transplantation tolerance [14] and maternal tolerance to the foetus [15].

Smad3-/- mice were generated by targeted gene disruption in murine embryonic stem cells by homologous recombination [3]. Both Smad3-/- mice and their littermate controls (wild-type, Smad3+/+) were provided by Xiao Yang (Institute of Biotechnology, Beijing, China). The mice used in these experiments were 6-8 wk of age.

Analysis of leukocytes in peripheral blood

Before mice were sacrificed, approximately 20 μL blood samples were collected through tail vein, diluted, and then analyzed on Sysmex F-820 semi-automatic analyzer (Japan).

Peripheral blood, thymus, spleen and lymph nodes were harvested from mice. Single-cell suspensions were subjected to hypotonic lysis of red blood cells (Becton Dickinson), washed in phosphate-buffered saline, stained with fluorescein-conjugated antibodies according to standard protocols, and then analyzed on an FACScan (Beckman Dickinson). For isolation of peripheral blood mononuclear cells (PBMC), 2 mL of heparinised peripheral blood diluted 1:1 with PBS was layered onto an equal volume of Ficoll-Hypaque density gradient solution and centrifuged at 300 r/min at room temperature. The mononuclear cells were collected, washed twice with PBS.

Difference was defined as being statistically significant when P <0.05 was obtained using Student’s t test.

RESULTS
Increased numbers of neutrophils and lymphocytes in Smad3-/- mice 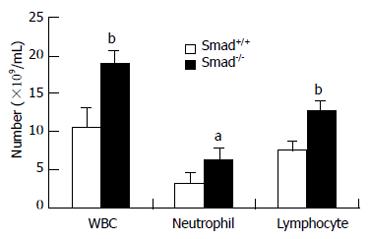 Figure 1 Total numbers and differential distributions of blood leukocytes in Smad3+/+ and Smad3-/- mice. Peripheral blood samples were collected from tail veins of mice, and then analyzed on Sysmex F-820. Shown here are the means and standard deviations of total numbers and distributions of blood leukocytes from 4 wild-type and 4 mutant mice (aP < 0.05, bP < 0.01).
Changes of lymphocyte subpopulations

Susceptibility of Smad3-/- mice to infection and tissue inflammation [3] made us wonder whether quantitative changes of lymphocytes were present in these mice. The results showed that numbers of CD19+-expressing cells (most B cells) in the peripheral blood and spleen were significanty decreased in Smad3-/- mice compared to their controls (Figures 2A and 2C). In addition, the number of CD8+ T cells was also reduced in thymus in Smad3-/- mice (Figure 2B). Analysis of lymph nodes did not reveal any significant difference between the mutant mice and littermate controls (Figure 2D).

Figure 2 Percentage of lymphocyte subpopulations in peripheral blood (A), thymus (B), spleen (C) and lymph nodes (D) of wild-type and mutant mice. The cells were stained with PE-anti-CD4 and FITC-anti-CD8, or with FITC-anti-CD3 and PE-anti-CD19, and then subjected to cytometric analyses. Shown here are the means and standard deviations of percentage of lymphocyte subpopulations from 4 wild-type and 4 mutant mice (aP < 0.05, bP < 0.01).
Increased CD4+CD25+ T cells in Smad3-/- mice

Figure 3 Percentage of CD4+CD25+ T cells in peripheral lymphoid tissues of Smad3+/+ and Smad3-/- mice. PBMC (blood) or single-cell suspensions from thymus (T), spleen (S), and lymph nodes (L) were prepared according to “MATERIALS AND METHODS”, co-labeled with PE-anti-CD4 and FITC-anti-CD25, and then analyzed by FACScan.
DISCUSSION

During infection, the balance between self-reactive effector T cells and regulatory T cells could determine the time of onset, the intensity and duration of autoimmune response [27]. Recent studies have focused on a population of CD4+ T cells that constitutively express CD25. CD4+CD25+ T cells comprise 5%-10% of the peripheral CD4+ T cell pool of normal mice and humans and exhibit immunosuppressive abilities both in vitro and in vivo [28,29]. Studies of human diseases indicate that the functional CD4+CD25+ T cells are enriched in inflamed joints of patients with rheumatoid arthritis [30] or with the juvenile idiopathic arthritis [31]. In our study, we showed that an increased population of CD4+CD25+ T cells was pre-sent in Smad3-/- mice, which could partially account for the susceptibility to inflammation of these mutant mice. However, our results and those of a previous study [3] did not reveal any significant difference of CD4+ T cells of spleen and lymph nodes between the asymptomatic mice and littermate controls. A possible explanation for the increase of CD4+CD25+ T cells is that they are derived from the CD4+CD25- cells under the condition of Smad3 gene mutation. It is well accepted that CD4+CD25+ T cells can be generated by the activation of mature, peripheral CD4+CD25- T cells under different stimulatory conditions [28]. Further studies should concentrate on defining the functional characteristics of the CD4+CD25+ T cells in Smad3-/- mice to gain a better insight into the mechanisms of susceptibility to inflammation.

The authors would like to thank Dr. Xiao Yang for providing Smad-3 wild-type and mutant mice. In addition, the authors thank Drs. Qi-Hong Sun, Jian-Ping Mao and Jian-En Gao for their many helpful comments and suggestions on these experiments.