The incidence of esophageal adenocarcinoma has been rapidly increasing in western countries. With the improvement of investigation devices, reflux esophagitis and Barrett’s esophagus (BE) have also been reported in more and more cases in China. In these diseases, duodenogastroesophageal reflux has been established as a strong risk factor[1]. The main components of refluxates are acid and bile acid, whose potential contributions to the esophageal diseases have widely been discussed. However, the effects of acid and bile acid on esophageal cell proliferation and the related signal transduction mechanisms remain unknown. The mitogen-activated protein kinase (MAPK) family, also known as extracellular signal-regulated kinase (ERK), c-Jun-N-terminal kinase (JNK), and p38 pathways, transmit extracellular growth-regulating signals to effector genes in the nucleus, the activation of the ERK pathway is usually associated with pro-proliferative and antiapoptotic effect[2]. Peroxisome proliferator-activated receptor γ (PPARγ), a member of the nuclear hormone receptor superfamily, has recently been shown to be implicated in the development of many digestive tumors[3], with the potential role in the downstream of ERK pathway[4].

In the present study, we examined the effects of acid and bile acid on cell proliferation in normal human esophageal epithelial cells in vitro, in association with ERK signaling pathway and PPARγ expression.

MATERIALS AND METHODS
Antibodies and reagents

Normal esophageal mucosa samples were obtained from surgically resected esophagus with esophageal carcinoma, then confirmed by an experienced pathologist to contain neither macroscopic tumor tissue nor histologically detectable metaplastic cells or cancer cells. Samples were acquired with the signed informed consent from the patient. Samples were collected aseptically, stored in sterile K-SFM at 4°C, and processed within 4 h. Primary culture of normal esophageal epithelial cells was undertaken according to the method described elsewhere[5]. The collected cells were suspended in K-SFM supplemented with BPE and rEGF, and seeded into 75-cm uncoated plastic culture flask in humidified air containing 50 mL/L CO2 at 37°C. After the initial subculture, an aliquot of cells was grown on coverslips for immunocytochemical stain with CK14 antibody.

For cell proliferation assay, 5×103 cells/well were plated in 96-well plates. Using MTT assay, changes in cell number were measured 24 h after different exposures. Then 10 μL MTT solution (5 mg/mL) was directly added to the cell cultures. After 4 h, media were removed and cells were lysed with 100 μL of dimethyl sulfoxide. Absorbance at 490 nm was read and data were presented as ratio to control (proliferation ratio).

For cell cycle determination, cells were seeded at 5×105/well in 6-well dishes. After 24 h of different exposures, cells were trypsinized and washed in PBS. A pellet of 1×106 cells was fixed in 750 mL/L ice-cold ethanol and stored at 4°C until analyzed. Before flow cytometric analysis, cells were stained with 50 μg/mL RNase and 50 μg/mL propidium iodide. Cells in the G1, S, and G2 phase of the cell cycle and cell apoptotic percentage were determined using flow cytometer (FACSCalibur, Becton Dickinson, USA).

After exposure to acid or bile acid for 3 min, cells were immediately treated with cold RIPA cell lysis buffer, followed by centrifugation at 10 000 g for 20 min at 4°C to remove the cell debris. Total protein of the supernatant was measured using a BCA protein assay kit. Protein electrophoresis was performed on a 100 g/L SDS- polyacrylamide gel with 50 μg protein added to each lane. The proteins were then transferred onto a PVDF membrane. The membrane was incubated overnight at 4°C with the various primary PPARγ (1:100), ERK1/2 and anti-phospho ERK1/2 (1:1000) antibodies, and then incubated with corresponding secon-dary antibodies conjugated to horseradish peroxidase for 2 h at room temperature. The protein bands were visualized by ECL and exposed to X-ray film. The relative density of the protein bands was quantified by densitometry using Electrophoresis Documentation and Analysis System.

All experiments were performed in triplicate. The data were expressed as mean ± SD. Statistical analysis between two groups was carried out using Student’s t-test, for comparison of three or more groups using ANOVA test. P < 0.05 was considered statistically significant.

Epithelial monolayer cultures were successfully established with the appearance of cobblestones (Figure 1). As a cytoskeleton protein of esophageal epithelial cells, CK14 was expressed in all secondary cultures using immunocytochemical stain. 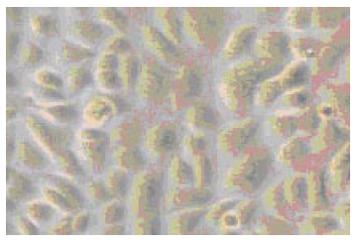 Figure 4 Changes in proliferation of cells exposed to bile acid with different pH for 3 min.

Expression of ERK1/2 and PPARγ

The expression of phospho-ERK1/2 was significantly increased in cells exposed to pH 4.0, 5.0 and 6.0 for 3 min (Figure 5) compared to control (pH 7.3) (P < 0.05). ERK activity increased immediately after acid exposure (pH 4，3 min), approximate to the level of control after 15 min (Figure 6). There were also increased expressions of phospho-ERK1/2 in cells exposed to different bile acid for 3 min (P <0.05) (Figure 7). No expression of PPARγ in normal human esophageal epithelial cells, either exposed to acid/bile acid or not, was observed. 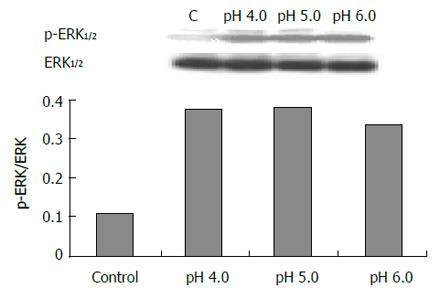 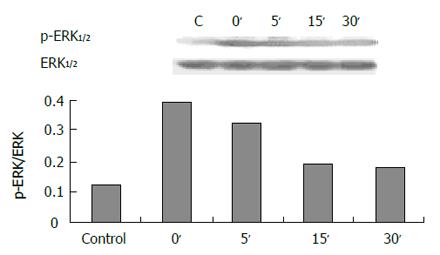 We found an acid-pulse (3 min) enhanced proliferation in normal esophageal epithelial cells, whereas continuous acid exposure blocked cell proliferation. A brief acid exposure (3 min) increased proliferation ratios at 24 h, yet longer exposure (>6 min) led to decreased cell number, which was more significant at pH<5.0. This was further confirmed by the results of cell cycle determination, a brief exposure (3 min) to acid produced an increase of cells in S phase, while longer exposure (6, 12 min) decreased the cell proportion in S phase accompanied by an increased apoptosis percentage.

The above results show that the effects of acid on esophageal cells are time-dependent, the brief exposure has pro-proliferation effect and longer exposure can induce apoptosis. Previous reports have showed the effect of acid on apoptosis, exposure to pH 3.5 for 2 d led to a decreased cell number in mouse esophageal keratinocytes[10], and normal human esophageal epithelial cells could not survive in media below pH 5.5 for 12 h[11]. Esophageal acid reflux is judged clinically by pH < 4. Since cells are cultured in vitro with a neutral pH of 7.2-7.4, their tolerance to acid is limited; this is mainly due to the defect of tissue organization, blood transportation and mucosal barrier in vivo.

To identify whether bile acid has the similar pro-proliferation effect, we exposed the normal esophageal cells to 6 conjugated bile acids and 2 unconjugated bile acids of 250 μmol/L for 3-60 min. The concentration choice was based on median bile acid concentration found in esophageal aspiration in patients with BE[12]. We found a brief bile acid exposure (3-12 min) also increased proliferation ratios at 24 h and the cell proportion in S phase, while with prolongation of exposure time to the acid and bile acids, especially DCA, the cell number decreased, suggesting that DCA is more toxic than other bile acids. Furthermore, we found that toxic effect of acid was higher compared to bile acid with the same exposure time.

In most cases, duodenogastroesophageal reflux is the mixed reflux of acid and bile. The toxic effects of bile acids are known to vary with pH. Unconjugated bile acids (pKa>4) and glycine conjugates (pKa>6) are soluble in nonionic pattern when pH > 4, whereas taurine conjugates are freely soluble even at pH 2[12]. Bile acids in nonionic pattern are easy to enter cells because of their affinity to lipid. Esophageal perfusion studies in animal models showed that unconjugated bile acids caused mucosal damage selectively in alkaline solutions, whereas taurine conjugates were toxic in acidic conditions[13]. We investigated the influence of pH on the effect of bile acid in cells, and found that compared with bile acid exposure group, the mixed exposure group had a decreased proliferation ratio, which dropped to the lowest at pH 4, yet for GC the lowest proliferation ratio was seen at pH 6.5. So, we could conclude that acid aggravates the toxic effect of bile acid, which may be due to the influence of pH on the ionization degree of taurine conjugates and glycine conjugates. In addition, it may be also related to the synthetic toxic effects of acid and bile acid, since we found that with the same exposure time (3 min), acid or bile acid exposure enhanced cell proliferation, but the mixed exposure decreased the proliferation.

Since acid and bile reflux in esophagus have been clinically shown to be intermittent and repeated, the abnormal proliferation induced by acid and bile acid may play an important role in the development of reflux-related diseases. Though there have been various points of view about the damage mechanisms of refluxates, their pro-proliferative mechanism has been seldom reported. So, we investigated the relation between ERK signaling pathway and the proliferation effects of acid and bile acid. ERK is an important signal transduction factor, unreactive in cytoplasm in normal condition, can be activated by physicochemical stimulus to enter nucleus and is implicated in cell physiological and pathological processes, such as growth, division, proliferation, apoptosis and malignant progression[14]. We found the proliferation induced by acid and bile acid in normal esophageal epithelial cells was related to the up-regulation of ERK expression, which suggest that acid and bile acid may result in esophageal inflammation, intestinal metaplasia and malignant progression by inducing ERK-mediated proliferation.

Recently some reports have suggested the implication of PPARγ in control of tumor cell growth and its possible role in the downstream of ERK signaling pathway[3,4]. PPARγ is over-expressed in many malignant tissues, but its expression in esophagus remains controversial. Some authors reported PPARγ mRNA level was lower in esophageal squamous cell carcinoma tissues than that of normal esophageal mucosa[3]. Others found PPARγ mRNA was expressed in biopsies of both normal esophageal mucosa and BE, but expression of this protein was detected only in BE[15]. In our study, no expression of this protein was observed either in normal esophageal epithelial cells or the cells exposed to acid or bile acid.

In conclusion, we have shown, probably for the first time, that a brief exposure to acid or bile acid induces in vitro proliferation in normal human esophageal epithelial cells, accompanied with the up-regulation of ERK, a potential molecular pathway whereby duodenogastroesophageal reflux may contribute to the development of reflux esophagitis, BE and esophageal adenocarcinoma. Moreover, acid aggravates the toxic effect of bile acid, which supports the view that the mixed reflux facilitates damage to the esophageal mucosa.