AIM: To study the effect of interleukin-10 (IL-10) on the expression of transforming growth factor β1 (TGF-β1) in hepatic fibrosis rats and the anti-fibrotic role of exo-genous IL-10.

RESULTS: Hepatic fibrosis developed in rats with the increase of the injection frequency of CCl4. In the first stage, hepatic fibrosis developed and HSCs were isolated successfully. At the 7th and 11th week, TGF-β1 mRNA in GC group increased significantly compared with that in GN1(P = 0.001/0.042)and GI groups(P = 0.001/0.007), whereas there was no significant difference between the two groups. The levels of TGF-β1 at the beginning of the 7th wk was higher than that of the 11th wk(P = 0.049). Immunocytochemistry results of TGF-β1 were consistent with the above findings. In the second stage, TGF-β1 increased significantly in GM group compared to GN2. After treatment with IL-10, TGF-β1 declined obviously. The expression of TGF-β1 decreased in GR group but was still higher than that in GT group.

CONCLUSION: The levels of TGF-β1 are increased in hepatic fibrosis rats and decreased after treatment with exogenous IL-10. IL-10 may play an anti-fibrotic role by suppressing TGF-β1 expression.

Hepatic fibrosis, which represents the wound healing response of the liver, is a common sequel of liver injury characterized by increased deposition and altered composition of extracellular matrix(ECM)[1-2]. Hepatic stellate cells(HSCs)are the major source of ECM and regarded as the principle cell type in the development of hepatic fibrosis [3-5]. TGF-β1 appears to be the main fibrogenic mediator and exerts its effects through autocrine or paracrine on HSCs [6]. Hepatocytes also express TGF-β1 when isolated and cultured in vitro as a response to an altered extracellular environment. It has been reported that interleukin-10 (IL-10)could relieve the degree of rat hepatic fibrosis induced by carbon tetrachloride(CCl4)[7]. In the present study, we isolated HSCs and detected the expression of TGF-β1 in HSCs and liver tissues, and explored the relationship between TGF-β1 and hepatic fibrosis in an attempt to explain the possible mechanisms of the antifibrotic activities of exogenous IL-10 in vivo.

MATERIALS AND METHODS
Establishment of models

In the first stage, at the beginning of the 7th and 11th week,2 rats from each group were chosen randomly for histological examination. Liver tissues were fixed in 10% formalin and embedded with paraffin. Sections were stained with hematoxylin and eosin (HE) and examined under a light microscope.

Isolation, incubation and identification of HSCs

Isolation, incubation and identification of HSCs were performed as previously described[10]. Briefly,at the beginning of the 7th and 11th week, 5 rats from each group were chosen randomly to perfuse with 0.13% pronase E and 0.025% type-IV collagenase through a portal vein catheter. The liver tissue suspension was incubated with 0.02% pronase E and 0.025% type-IV collagenase under agitation. The suspension obtained from the digested liver tissue was centrifuged with 11% Nycodenz density gradient to purify HSCs. Then, the HSCs were seeded at the concentration of 1×106 cells /mL of Dulbecco’s modified Eagle’s medium(DMEM)supplemented with 20% fetal calf serum in 96-well plates and kept at 37 °C in a 50  mL/L CO2 atmosphere for 72 h. The HSCs were identified by their typical phase-contrast microscopic appearance and immunocytochemistry using antibody directed against desmin. Cell vitality was checked by trypan-blue exclusion.

Total RNA was extracted from freshly isolated HSCs and liver tissues according to the instructions of the RNA isolation kit (Jingmei Biotechnology Company, Shenzhen). Its quantity and purity were assessed by measuring the optical density at 260 nm and 280 nm. After measurement of RNA amount,samples were either used immediately for RT or stored at -70 °C.

For RT, 1 μg total RNA was transcribed following the instructions of the first strand cDNA synthesis kit(Jingmei Biotechnology Company, Shenzhen). Twenty μL reaction mixture was transcribed at 42 °C for 60 min, at 99 °C for 5 min and stored at -20 °C.

For PCR, primers coding for the house-keeping gene-β-actin were added into the reaction mixture to standardize the results. Fifty μL aqua was added into the reactive system containing 2 μL cDNA, 5 μL 10×buffer, 5 μL 25 mmoL/L MgCl2, 1 μL 10 mmoL/L dNTP, 1 μL 20 mmoL/L up stream and down stream primer of target gene, 1 μL 20 mmoL/L β-actin primer pairs, 3U Taq DNA polymerase. Then PCR was performed with pre-denaturation at 94 °C for 5 min followed by 30 cycles at 94 °C for 45 s, at 55 °C for 30 s, at 72 °C for 60 s and a final extension at 72 °C for 7 min. Primers were designed according to the reference of GenBank(Table 1). PCR products were immediately analyzed by 20 g/L agarose gel electrophoresis and the density of resultant bands was semi-quantified by scanning densitometry using the ratio of TGF-β1 to β-actin to assess the relative level.

Most of HSCs attached to the dishes after 72 h of primary culture. The 96-well plates were washed twice with 0.1 moL/L PBS and cells were fixed with poly-formaldehyde at 4 °C overnight. The following procedures were performed according to the instructions of streptavidin/peroxidase(S-P)kit (Beijing Zhongshan Company). Briefly, cells were washed with PBS, incubated with bovine serum albumin in PBS, reacted with primary antibody dissolved in PBS, washed, incubated with peroxidase-conjugated second antibody, washed again and reacted with S-P for 20 min. Color reaction was developed by incubation with DAB. In negative controls, the primary antibody was replaced by PBS.

After dewaxed with xylene and rehydrated through a graded alcohol series, sections were digested with 4 g/L trypsin. The following procedures were similar to the steps of immunocytochemistry. Slides were then analyzed with an image analyzing system to obtain the relative contents of hepatic TGF-β1. The characteristics of the antibodies used in this study are summarized in Table 2.

All data were expressed as mean±SE. The significance for the difference between the groups was studied with SPSS11.0 by one-way ANOVA. P < 0.05 was considered statistically significant.

Hepatic fibrosis became remarkable after the treatment with CCl4. At the 7th wk, specimens from the GC group showed steatosis and ballooning degeneration, the collagen fibers increased and began to extend to the parenchyma, many mononuclear cells and unusual neutrophils surrounded the centrilobular veins and fibrotic septa(Figure 1A),while only a few inflammatory cells infiltrated around the centrilobular veins without evident changes of lobular structure in the GI group (Figure 1B). At the 11th week, the reticular fiber extended into the hepatic plate and full delimitation was developed(Figure 1C), while less fibrosis septa and inflammatory infiltration were seen in the GI group (Figure 1D). Specimens from the GN1 group showed normal lobular structure(Figure 1E). Due to the limit of samples, no statistical data presented disparity between the two groups, but fibrogenesis in the GI group was much less severe than that in the GC group. 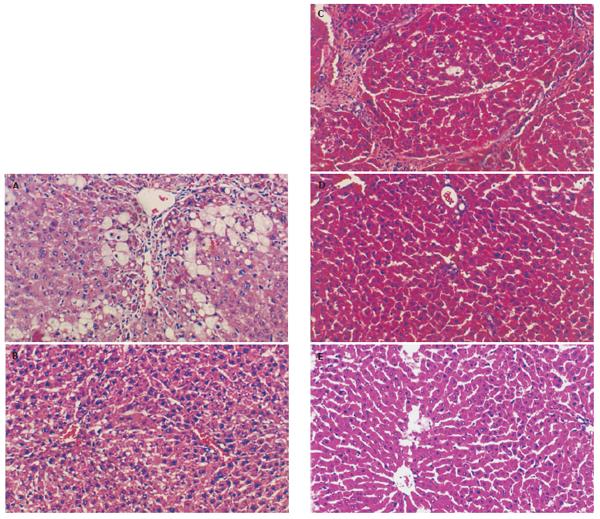 A total of 2-4.5×107 cells were harvested from each rat. HSCs were identified by immunoreaction with desmin(Figure 2). The mean purity of freshly isolated HSCs was 95% ± 5%. The cell vitality checked by trypan-blue exclusion was higher than 95%. 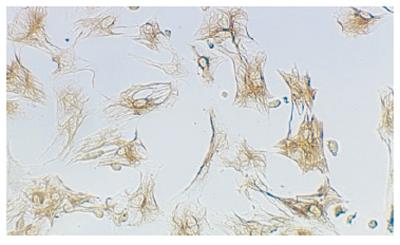 Figure 3 Expression of TGF-β1 in HSCs the first (A) and the second stage (B).
Immunocytochemistry and immunohistochemistry

In the first stage, TGF-β1 positive expressions were localized in cytoplasm and nuclei of HSCs in all groups by immunocytochemistry after 72 h of primary culture. Most of the cells attached to and spread over the plastic substratum. At the 7th wk, the size of HSCs in the GC and GI groups was a little larger than that in the GN1 group. At the 11th wk, cell phenotype in the GI group showed circle or ellipse and was a little smaller than that in the 7th wk, no obvious change of phenotype was seen in the GC group. Although the number of samples was limited, the expression of TGF-β1 in the GC group was higher than that in the GN1 group and decreased after treatment with IL-10(Figures 4A-4D). In the second stage, TGF-β1 positive expressions in the GM group were localized in most of the liver tissues, appearing brown. After treatment with IL-10, the distributing area was smaller and the color was lighter. TGF-β1 expression in the GR group was lower than that in the GM group but still higher than that in the GT group(Table 4, Figures 5A-5D).

The expression of serum TGF-β1 detected by ELISA in different groups had the same tendency as that detected by RT-PCR and immunohistochemistry in the second stage(Table 4).

Although significant progress has been made in understanding the pathogenesis of hepatic fibrosis, a rational therapy that prevents the progression or even reverses fibrosis remains elusive[11-13]. IL-10 is produced mainly by TH2 cells and inhibits the functions of TH1 cells. It down-regulates pro-cytokines synthesis and is associated with amelioration of the inflammatory response[14-16]and fibrosis[17-18]. The present study also found the trend from the pathological sections that IL-10 could relieve the degree of inflammation. In this experiment, we detected TGF-β1 in hepatic fibrosis group as well as in IL-10 treatment group.