METHODS: HepG2 (human hepatoma) and LS174T (colon carcinoma) were used in this study. The fused gene was induced with 0.02 % of arabinose for 4 h and the expressed protein was detected by Western blotting. The chimeric protein expressed in E.coli was checked for its cytotoxic activity on these cells and apoptosis was measured by comet assay and nuclear staining.

RESULTS: The chimeric protein was found to be cytotoxic to the colon cancer cell line expressing GM-CSFRs, but not to HepG2 lacking these receptors. Maximum activity was observed at the concentration of 40 ng/mL after 24 h incubation. The IC50 was 20  ±  3.5 ng/mL.

CONCLUSION: Selective cytotoxic effect of the hybrid protein on the colon cancer cell line expressing GM-CSF receptors (GM-CSFRs) receptor and apoptosis can be observed in this cell line. The hybrid protein can be considered as a therapeutic agent.

Although systemic treatment of colon cancer including combination of surgery, hormone therapy, chemotherapy is commonly believed to be effective in prolonging patient survival, colon cancer remains one of the principal cancer-related deaths[1]. Human cancer is becoming more definable by cell surface proteins. One of these molecules is GM-CSF receptor that expresses in several tumors inclu-ding colon cancer[2].

GM-CSF is used to attenuate the myelosupressive effects of chemotherapy in the treatment of hematologic malignancies and solid tumors, but GM-CSF usually does not stimulate growth of solid tumors[2]. It was reported that GM-CSFR is absent on most immature hematopoietic progenitors but increases expression during maturation[3]. This finding strongly suggests that GM-CSFR may be a useful target for recombinant toxins or immunotoxins.

Immunotoxin comprises cells targeting and killing moieties. Therefore, bacterial or plant toxins are used as the killing moieties. Shiga and Shiga-like toxins (STX, SLTs) are ribosome-inactivating proteins (RIPs) produced by Shigella and E.coli, composed of an enzymatic A subunit non-covalently associated with a pentamer receptor-binding subunit. SLTs inhibit protein synthesis in eukaryotic cells by releasing adenine residue from the highly conserved aminoacyl-tRNA-binding site which exists on large subunit of ribosome [4]. In this study, the catalytic domain of Shiga toxin (StxA1) and hGM-CSF were genetically fused and expressed in E.coli. Then, the function of recombinant protein was assessed on colon cancer cell line.

The catalytic domain of Shiga toxin, StxA1, was fused to hGM-CSF by PCR technique and expressed in bacteria with 0.02 % arabinose for 4 h incubation. The expressed protein was purified following the manufacturer's instructions (Invitrogen, USA). The amount of protein was estimated by Bio-Rad protein assay kit (Bio-Rad, USA).

The cytotoxic effect of SltxA1-GM-CSF was determined by trypan blue exclusion assay and MTT[5] assay. For trypan blue dye exclusion assay, 2.5 × 104 cells were seeded in one well of 96-well plates and different concentration (10-160 ng) of SltxA1-GM-CSF was added to each well. After incubation for 24, 48, and 72 h, the number of viable cells was determined.

For MTT assay, HepG2 and LS174T cell lines were cultured and StlxA1-GM-CSF was added as described above. After 24, 48 or 72 h incubation, 10 µL of 0.5 mg/mL of 3-(4, 5-dimethylthiazol-2-yl)-2,5-diphenyltetrazolium bromide (MTT; Sigma, Japan) was added to each well and further incubated at 37  °C in 50 mL/L CO2 atmosphere for 4 h to allow MTT to be converted to formazon crystals by reacting with metabolically active cells. Reactions were stopped by addition of 10 % SDS in 0.01 mol/L HCl and absorbance at 570 nm was determined.

Neutral comet assay was carried out as previously des-cribed[6] with some modifications. Briefly, freshly prepared cell suspension (2  ×  103 / 10 µL) was mixed with 150 µL of 1% low-melting agars. The mixture was layered on top of the microscopic slide coated by 1 % agarose. After low melting agarose was solidified in a refrigerator for 10 min, the slide was gently immersed in a freshly prepared lysing solution (2 % SDS, 0.03 mol/L EDTA) for 30 min protected from light. After the slides were washed with TBE buffer, electrophoresis was carried out at 25 V for 25 min. Then, comets were visualized with 1 mmol/L propodium iodide. One hundred and fifty cells per slide were analysed under fluorescent microscope.

After administration of SltxA1-GM-CSF, cells were fixed with 1 % paraformaldehyde for 30 min, washed with PBS and stained with 1mmol/L Hoechst 33342 (Sigma, Japan) for 10 min. Nuclear morphology of at least 400 cells was randomly observed under fluorescent microscope.

The results were expressed as mean ± SD and each value represented the mean of three experiments. Differences between groups were compared using the Student’s t test. P < 0.05 was taken as significant.

RESULTS
Expression and characterization of StxA1-GM-CSF

The fusion protein consisting of 1-255 a.a. of A1, the catalytic domain of Shiga-toxin and 1-127 a.a. of hGM-CSF was observed. The recombinant was analysed by SDS-PAGE and Western blot as previously described[7].

Cytotoxicity of hGM-CSF to cells was analysed by both trypan blue exclusion assay and MTT assay. LS174T cells showed the extreme susceptibility to StxA1-GM-CSF (Figure 1), while HepG2 cells lacking GM-CSFR showed very poor susceptibility to StxA1-GM-CSF. Maximum activity was observed at the concentration of 40 ng/mL (P  <  0.001) after 24 h incubation. Higher concentration and longer treatment time did not show any profound effect. The IC50 was 20 ± 3.5 ng/mL. 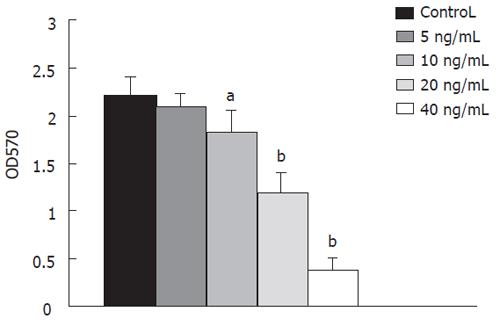 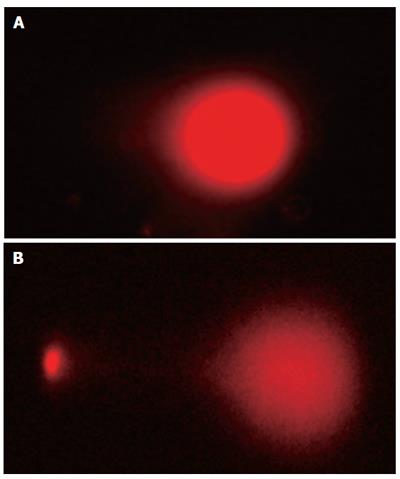 Figure 2 Morphology of normal cells (A) and apoptotic cells (B) after treatment with hybrid protein. 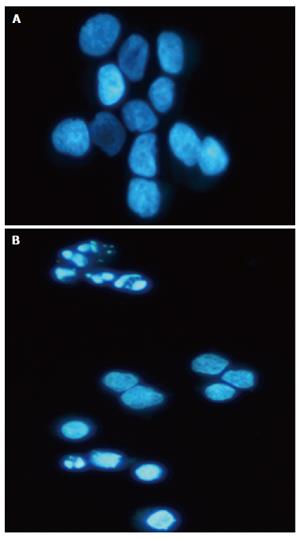 Figure 3 Hoechst 33342-staining of LS174T cells treated with StxA1-GM-CSF. A: control; B: cells after treatment.

In this study we constructed the recombinant protein of StxA1-GM-CSF by overlap extension PCR, which was expressed in pBAD/gIIIA system[7]. Al-Jaufy et al[8] have also made the recombinant protein genetically. They fused StxA with HIV gp120-binding domain of CD4 by restriction enzyme sites. However, some limiting factors like incomplete digestion, absence of suitable restriction sites for genes of interest and appropriate vector have limited the application of this method. Accuracy and ease of manipulation, are likely the advantages of PCR technique.

StxA is an established inhibitor of eukaryotic translation and more potent than ricin[9]. No reduction in its enzyma-tic inhibitory activity has been reported when it is genetically fused with HIV gp120-binding domain of CD4[8]. Similarly in our study, fusion of StlxA1 with hGM-CSF caused no reduction in its inhibitory effect. In addition, the enzymatic domain of diphtheria toxin has been fused to hGM-CSF using recombinant DNA techniques and is under clinical trial[10]. Our results suggest that StxA1-GM-CSF is more toxic than DT-GM-CSF, since IC50 is 20 ± 3.5 ng/mL for StxA1-GMCSF and 70 ± 18 ng/mL for DT-GM-CSF[8]. In this study, LS174T showed very obvious cytotoxic effect and changes characteristic of apoptosis were observed. A close correlation between protein synthesis inhibition and apoptosis induction has also been reported for DT-GM-CSF in which LS174T is not sensitive to apoptosis while other cell lines are more sensitive to cytotoxicity and apoptosis[11].

Agarose gel electrophoresis is one of the commonly used techniques for the detection of apoptotic cells. This technique usually involves a DNA isolation procedure from millions of cells and obtained results can not be quantified[12]. TUNEL assay is an established method for the detection of apoptotic cells, but this method is associated with a number of artefacts[13]. Annexin V labelled with fluorescent protein like FITC is used for rapid cytofluorometric analysis of apoptosis, but this method can produce false positive results when membrane is damaged[14]. Comet assay is sensitive, simple and fast. Usually this method is used to detect DNA damage like single or double strand breaks. On the other hand, this method also can detect single apoptotic cells in a large number of cells[15]. A few studies have tried to delineate the mechanism of apoptosis induction by Stx[16-18]. More knowledge about its mechanism can help us prevent shigellosis and enable us to tackle the problem of resistance to cancer therapy. Induction of apoptosis by hybrid protein indicates that catalytic domain of Shiga toxin in hybrid protein can not activate the cellular apoptosis machinery directly since the toxin inactivates ribosomes that inhibit protein synthesis.

In conclusion, more investigations are required to clarify how StxA1-GMCSF induces apoptosis. Our results reveal that the hybrid protein is toxic to the colon cancer cell line and can be considered as a therapeutic agent.

The authors thank Li Li for his technical assistance.