RESULTS: The positive rate of Helicobacter cultured in HCC and gastric cancer tissue was 10.7% (3/28) and 24%(6/25), respectively. Helicobacter microorganisms were identified further by typical appearance on Gram staining, positive urease test and characteristic colony morphology on TEM. The bacterium was observed in adjacent hepatocytes of the two HCC samples by SEM. The number of cocci was greater than that of bacilli. The bacterium was also found in four gastric cancer samples. PCR showed that the positive rate of HCC and gastric cancer samples was 60.7% and 72% respectively, while the controls were negative (P < 0.01). The PCR-amplified products were identified by Southern hybridization and sequenced. The homology to 16S rRNA of H pylori was 97.80%. The samples were verified by in situ hybridization for Helicobacter spp. 16S rRNA-mRNA and proved to be H pylori positive. There was no statistical significance between HCC and gastric cancer (P > 0.05), but the positive rate of HCC and controls had statistical significance (P < 0.01). Only 3 HCC samples and 2 gastric cancer samples of the cagA genes were detected. None of the samples reacted with primers for vacA in the two groups. As for the genotype of H pylori, type II had preference over type I.

The profound impact of HCC on human health is known worldwide[1]. In China, the death rate ranks the third in malignant tumors. Persistent hepatitis B virus (HBV) and hepatitis C virus (HCV) infection and aflatoxins are the main causes of HCC[2]. The real risk factors for HCC may be far more than the known causes. A new infectious agent, Helicobacter hepaticus (H hepaticus) causing chronic active hepatitis and associated liver tumors has been described by Ward et al[3]. Recently, other Helicobacter species (Helicobacter spp.), including H pylori and other bacteria associated with the pathogenesis of gastric[4-7] and extradigestive manifestations[8,9], have been detected in the liver of patients suffering from cholestatic diseases and HCC arising from non-cirrhotic liver[10,11]. We have previously reported a high frequency of Helicobacter spp. in the liver of patients with HCC[12]. Helicobacter spp. DNAs have been detected in paraffin-embedded tissue sections of HCC by PCR[13]. Whether Helicobacter spp. promotes liver tumors or acts as a cofactor in the process of carcinogenesis in humans with hepatitis virus needs further research. This study was to determine whether Helicobacter spp. could be detected in HCC tissue and to investigate the potential significance of Helicobacter in HCC carcinogenesis.

All samples were immediately frozen in liquid nitrogen and stored at -80°C before testing. Liver samples from 28 patients with HCC (25 males, 3 females, mean age 54 years) were studied. Twenty patients (18 males, 4 females, mean age 48 years) with other liver diseases (5 with liver trauma, 7 with cavernous liver hemangioma, 6 with liver cyst and 4 with hepatolithiasis), 25 with gastric cancer (20 males, 5 females, mean age 61 years), 15 with colonic carcinoma (9 males, 6 females, mean age 55 years) and 15 with myoma of uterus (mean age 49 years) served as controls. Two pieces of biopsy were obtained from each patient, one was cultured for Helicobacter spp. and extraction of DNA, the other was prepared for scanning electron microscopy (SEM) and in situ hybridization.

To culture Helicobacter spp., the diluted homogenates of biopsy specimens were smeared on the surface of Columbia agar plates (Oxoid Company, France) supplemented with 7% sheep erythrocytes, 6 μg/mL vancomycin, 2 μg/mL amphotericin B and 0.32 μg/mLpolymyxin B. The plates placed in an anaerobic jar together with a GENbox microaer paper sachet (Biomerieux, Marcy l’Etoile, France) were incubated to generate a microaerophilic environment containing 5 mL/L oxygen, 10 mL/L CO2, and 85 mL/L N2), then the biopsy specimens were incubated at 37°C for 7 d under a humid condition. Helicobacter colonies were identified further by their typical morphology, characteristic appearance on Gram staining, positive urease test. PCR was performed to examine the 16S rRNA, cagA and vacA genes of Helicobacter spp. The PCR products were sequenced.

The PCR products were purified from agarose gels by the JETsorb DNA extraction kit (Genomed, GmbH, Bad Oeynhausen, Germany). The purified products were sequenced and analysed (Dalian Bao biotechnology Co., Ltd, China). The sequences were compared with the known 16S rRNA of Helicobacter spp. and the other bacteria using the GenBank.

Scanning microscopy and in situ hybridization

The appropriate specimens were examined by SEM (JEOL JSM-840). For each hybridization reaction, the biopsy specimens were frozen, cut into 4 µm thick sections using a cryomicrotome (Leica, Wetzlar, Germany) and placed on glass slides. The slides were placed in 4% polyformaldehyde for 20 min, washed and treated with proteinase K (100 µg/mL) at 37°C for 30 min, washed again and marinated with 0.2% glycin for 10 min, and finally washed with 2 × SSC for 5 min. The sections were covered with 20 µL of 4 kinds of probes mentioned above. The slides were then hybridized overnight at 60 °C in a humid chamber and washed with SSC. The sections were incubated in protein blocking buffer. After washed, the slides were incubated with anti-digoxin-alkaline phosphatases complex (1:3000) for 1 h at 37 °C and marinated with buffer. After marinated, the slides were counterstained with DAPI overnight, marinated with double-distilled water for 5 min, dehydrated in a graded series of ethanol, hyalined with xylene, covered with balata and observed under microscope.

The results of PCR and hybridization were analyzed. P < 0.05 was considered statistically significant.

Helicobacter microorganisms were identified by typical appearance on Gram staining, positive urease test and characteristic colony morphology on TEM. After cultured for 48 h, the small and grey colonies were detected in Columbia agar plates, and the mean colony diameter was 1 mm. Helicobacter was cultured in 3 HCC and 6 gastric cancer tissue specimens. The positive rate was 10.7% and 24%, respectively. The bacterium was positive in urease test. TEM showed that the bacterium could be divided into two types, one was bacillus with flagellum, the other was coccus with flagellum. All the flagelli were located in one side.

The cocci were observed by SEM in adjacent hepatocytes of 28 HCC samples, and the mean diameter cocci was 0.7 - 0.8 μm (Figure 1). In the 25 gastric cancer samples, 4 were found to have spiral-shaped bacteria (2.0-4.0 μm in length and 0.5-1.0 μm in width). The spiral-shaped bacteria partly adhered to the surface of gastric epithelial cells (Figure 2). 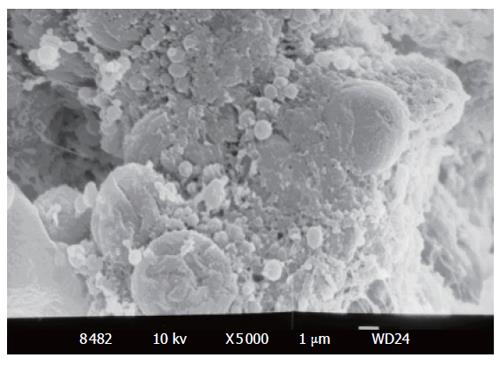 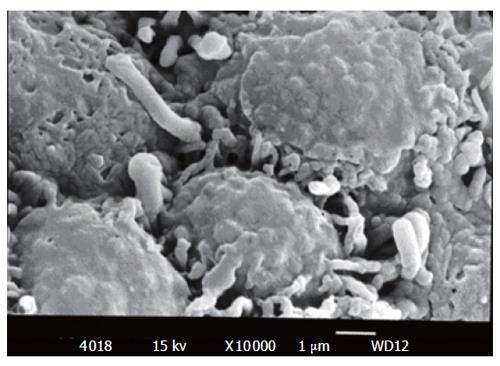 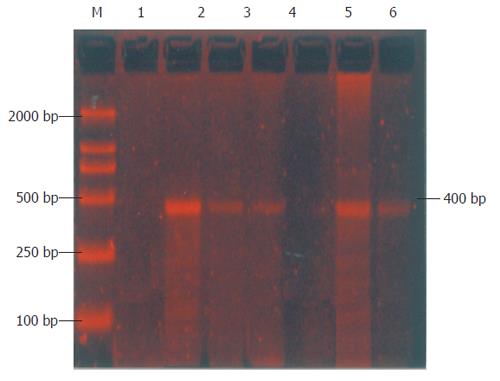 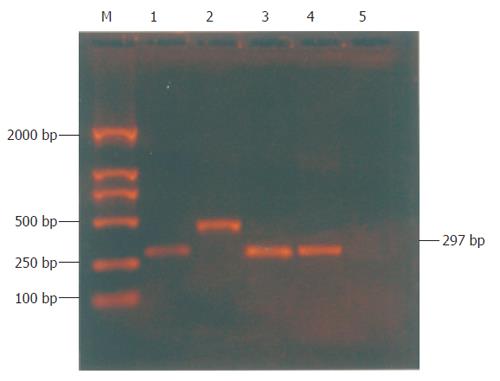 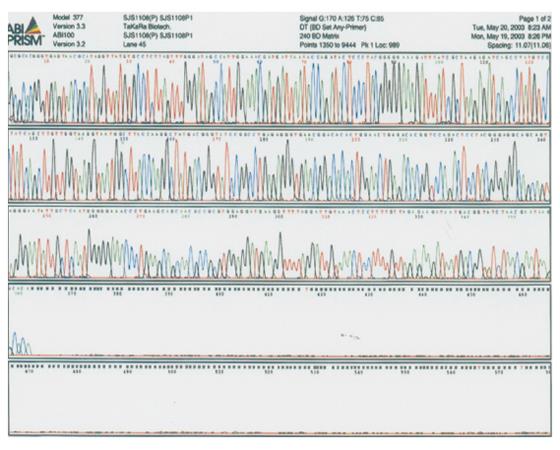 In situ hybridization showed that Helicobacter spp. 16S rRNA-mRNA was positive in 17 patients with HCCwith a positive rate of 60.7%. The black-brown granules distributed in cholangioles of hepatocytes were positive hybridization signal. The positive signal was also found in intracellular fluid close to the hepatocyte membrance. All the granules were dispersedly distributed. The number of granules was not different in carcinoma and its adjacent tissues. Seventeen patients with gastric cancer were positive and the positive rate was 68%. The positive granules residing within the epithelium plasma membrane were symmetrically distributed and the number of the granules was not different in carcinoma and its adjacent tissues. Helicobacter spp. was negative in patients with colonic cancer (except for one case) and in those with other liver diseases and myoma of uterus.

In order to confirm the type of Helicobacter, the probes for H pylori, H hepaticus and H fennellia were used to detect the positive samples of Helicobacter spp. 16S rRNA-mRNA by in situ hybridization. The result revealed that the hybri-dization by H pylori probe was consistent with that by Helicobacter spp. probe. The positive rate was 60.7% in HCC patients and 68% in gastric cancer patients while being negative in patients with other liver diseases.

In this study, the relationship between Helicobacter spp. and HCC was investigated by isolation and culture of strains from biopsies, electron microscope, PCR, hybridization techniques and partial DNA sequencing assay. The potential significance of Helicobacter spp. in HCC carcinogenesis was investigated. Helicobacter spp. was 10.7% (3/28) and 24% (6/25) cultured in HCC and gastric cancer tissue samples, respectively. Helicobacter microorganisms were identified by their typical appearance on Gram staining, positive urease test and characteristic colony morphology on transmitting electron microscopy. The bacterium was observed by SEM in the adjacent hepatocytes of HCC samples. The number of cocci was greater than that of bacilli. Our study showed that Helicobacter spp. DNA could be found in liver tissue from 60.7% patients with HCC, which might be related to a variety of environmental factors, host characteristic bacteria virulence determinants, and the small size of samples. Eighteen of 25 (72%) liver samples from patients with gastric cancer were positive by PCR analysis using Helicobacter spp. primers. Patients with HCC and gastric cancer had a higher positivity with no statistical significance (P > 0.05), suggesting that Helicobacter spp. infection is closely related with diseases of the digestive system. Amplified products were identified by Southern hybridization, suggesting that Helicobacter spp. infection might occur in HCC patients. Sequencing showed that PCR-amplified products and H pylori had a 97.8% homology. To make sure that the bacteria was H pylori, the vacuolating cytotoxin gene A (vacA) and cytotoxin-associated gene A (cagA) specific for H pylori were also detected by PCR. H pylori can be divided into cagA+- H pylori and cagA–-H pylori in clinical medicine, leading to a different result in gastrointestinal disease. CagA–-H pylori usually colonizes the mucous gel or the apical epithelial surface, whereas cagA+- H pylori colonizes the immediate vicinity of epithelial cells or the intercellular spaces[29]. Strains possessing the cag pathogenicity island are more likely to cause disease rather than those lacking this locus[30]. The vacA and cagA help gastric epithelial cells to form vacuolation, injury, necrosis, ulcer, etc. H pylori strains possessing cagA are associated with the development of peptic ulcer, gastric cancer and extragastric diseases. Most of the strains could be divided into two major types. TypeIbacteria have the gene coding for cagA and express CagA and VacA. Type II bacteia do not express either cagA or vacA[11]. Therefore, the difference between typeIand type II bacteria is due to toxicity. In our study, the cagA gene was detected in only 3 HCC and 2 gastric cancer samples (Figure 4). None of the samples reacted with primers for vacA in the two groups. As for the genotype of H pylori, typeII bacteria have preference over typeI, which is consistent with the report of Avenaud et al[11].

To confirm the Helicobacter spp. distribution in HCC patients, Helicobacter spp. 16S rRNA-mRNA was detected by in situ hybridization with a positive rate of 60.7%, which was coincident with the result by PCR. Besides, the positive rate in gastric cancer patients was 68%. The positive granules residing within the epithelium plasma membrane were distributed symmetrically. Helicobacter spp. was negative in patients with colonic cancer except for one case and those with other liver diseases and myoma of uterus. The positive rate in HCC and gastric cancer patients had no statistical significance (P > 0.05). When HCC patients were compared with those with other liver diseases, there was no statistical significance (P ＜0.01).

In conclusion, Helicobacter spp. infection is related with diseases of the digestive system, especially HCC and gastric cancer. Further studies are needed to establish the role of H pylori in HCC.