AIM: To compare the effects of Aloe vera and sucralfate on gastric microcirculatory changes, cytokine levels and gastric ulcer healing.

Aloe plants have been used medicinally for centuries. Among them, Aloe barbadensis, commonly called Aloe vera, is one of the most widely used healing plants in the history of mankind[5].

Two distinct preparations of Aloe plants are most used medicinally. The leaf exudate (aloe) is used as a laxative and the mucilaginous gel (Aloe vera) extracted from the leaf parenchyma is used as a remedy against a variety of skin disorders[6]. Aloe leaf exudate also possesses antidiabetic[7] and cardiac stimulatory activity[8].

Aloe vera is one of the few substances known to effec-tively decrease inflammation and promote wound healing[9,10]. Aloe vera gel could promote the healing of burns and other cutaneous injuries and ulcer[11,12], thus improving wound healing in a dose-dependent manner and reducing edema and pain[9].

Aloe vera gel has been demonstrated to protect human beings[13-15] and rats[16-22] against gastric ulceration. This antiulcer activity is due to its anti-inflammatory[20], cytoprotective[16], healing[20,23] and mucus stimulatory effects[24].

The animals were fasted but allowed only water 12 hours before experiment. On the day of experiment, the animals were weighed and anesthetised with intraperitoneal injection of sodium pentobarbital (50 mg/kg body weight). After tracheostomy, carotid artery and jugular vein were canulated for blood pressure measurement using polygraph and administration of fluorescent marker. The abdominal wall was incised and the stomach was extended and fixed. Then the leukocyte adherence in stomach was observed by in vivo microscopy.

Study of interaction between leukocytes and endothelial cells in postcapillary venule

After the experiment, blood samples were taken by cardiac puncture, allowed to clot for 2 h at room temperature or overnight at 2-8 °C before centrifugation for 20 minutes at approximately 2000 r/min. Serum was separated and stored at about -80 °C for determining TNF α and IL-10 levels by ELISA kit (Quantikine, R&D systems).

The stomach was fixed in 10% formalin and embedded in paraffin. Sections were cut at a thickness of 5 μm and stained with hematoxylin and eosin (H&E) as previously described[3]. Histopathological changes and maximum length of gastric ulcer were observed under light mic-roscope with magnification × 20. Histopathological exam-ination was performed by pathologists.

Data were expressed as mean ± SE. Statistical analysis was done using one-way analysis of variance and comparision of results between groups was made using post hoc test. P < 0.05 was considered statistically significant.

This study was approved by the Ethics Committee of the Faculty of Pharmaceutical Sciences, Chulalongkorn University, Bangkok, Thailand.

After gastric ulcer was induced by administration of 20 % acetic acid, leukocyte adherence to endothelial cells of postcapillary venules (15-35 mm in diameter.) was observed under intravital fluorescence microscopy. The number of leukocytes adhered to postcapillary venules for 30 s or longer was counted per each field of observation. The mean number of leukocyte adherences in the ulcer group without treatment (d1: 13.13 ± 1.19 cells/field; d8: 13.61 ± 1.99 cells/field) was significantly increased compared to the control group (d1: 1.69 ± 0.17 cells/field; d8: 5.53 ± 0.65 cells/field). 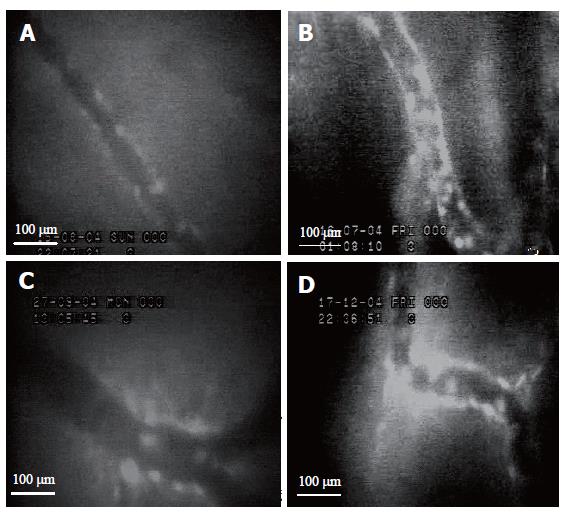 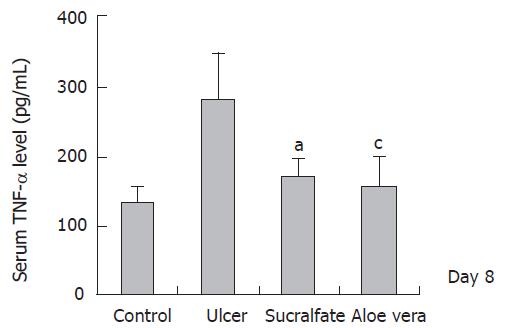 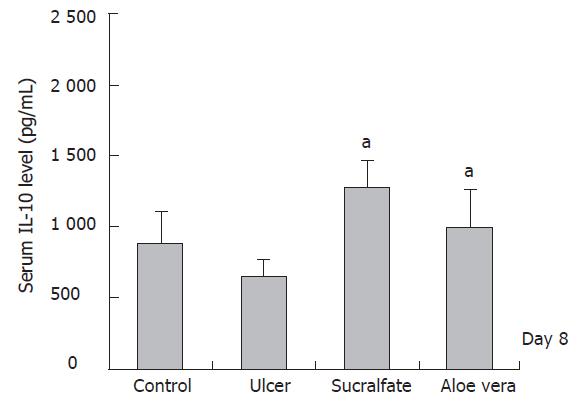 In this study, after gastric ulcer was induced by admi-nistration of 20 % acetic acid, gastric inflammation in-creased leukocyte adherence to the endothelial surface of postcapillary venules and was characterized by the migra-tion of macrophages and PMNs in the ulcer area. The migrated macrophages then released proinflammatory cytokines such as TNF-α and interleukin-1β (IL-1β). Pro-inflammatory cytokines can up-regulate adhesion molecule expression on endothelial cells and leukocytes[27,28] and cause leukocyte recruitment[29]. Adhesion molecules on endothelial cells and leukocytes involve rolling, adhesion, and transmigration of leukocytes in gastric inflamed areas. It was reported that increment of PMNs may play an important role in the pathogenesis of NSAIDs-induced gastropathy[30]. On the other hand, NSAIDs may enhance the expression of cell adhesion molecules on the surface of endothelial cells[31]. Adhesion molecules play an important role in the recruitment of leukocytes to inflammation sites, leading to gastric mucosal injury[31,32]. It was also reported that leukocyte adhesion and/or aggregation can occlude microcirculation, resulting in ischemic mucosal injury[31,33]. Leukocyte infiltration in gastric mucosa can cause tissue damage leading the ulcerative lesion[34].

In this study, gastric ulcer induced by administration of 20% acetic acid had elevated TNF-α levels, demonstrating that elevated pro-inflammatory cytokine level induces interaction between leukocytes and endothelial cells. It was suggested that 20 % acetic acid could stimulate macrophages to release proinflammatory cytokines. TNF-α can stimulate ICAM-1 expression on vascular endothelial cells. ICAM-1 is an adhesion molecule, which plays a pivotal role in inflammatory reaction by increasing leukocyte adhesion to endothelium and promoting transen-dothelial migration of leukocytes to inflammatory sites[3]. Moreover, it was reported that TNF-α can also stimulate expression of LFA-1 (CD11a/CD18)[35], an adhesion molecule on leukocytes. This might be the reason why of TNF-α and leukocytes-endothelium interaction is increased in the inflammatory area.

However, after gastric ulcer was induced by admini-stration of 20 % acetic acid IL-10 level was reduced on day 1, but elevated spontaneously on day 8 as compared to the control groups (Figure 3). This might be due to the fact that when the gastric mucosa was damaged by acetic acid, T and B lymphoctyes in submucosal beneath the damaged area that typically produce basal level of IL-10 were also damaged. The location of macrophages was actually beyond the damaged area, therefore, the macrophages were then survived. The survived macrophages are able to stim-ulate the release of TNF-α in response to acetic acid injury. Therefore, our findings suggest that TNF-α is synthesized more than IL-10. When inflammation occurs, IL-10 is synthesized. The increment of IL-10 level reduces gastric inflammation through its feedback inhibition of TNF-α production. Therefore, IL-10 is spontaneously elevated in chronic gastric inflammation. The elevation of IL-10 then reduces gastric tissue inflammation simultaneously.

Aloe vera and sucralfate could reduce leukocyte ad-herence after gastric ulcer was induced by 20 % acetic acid. It has been reported that Aloe vera can decrease carrageenan- induced edema and neutrophil migration in rats[36]. In addition, Aloe vera has antiinflammatory effect on burn wounds by reducing leukocyte adhesion in rats[37,38]. On the other hand, Aloe vera is able to inhibit prostaglandin F2α (PGF2α) and thromboxane B2 production in guinea pig with burn wounds[39]. Thromboxanes and prostaglandins (PGs) can elicit platelet aggregation, leukocyte adherence and vasoconstriction, thus enhancing ischemia. Moreover, Aloe vera possesses bradykininase activity and also decr-eases inflammation[9]. Bradykinin causes increase in vascu-lar permeability and stimulates inflammation[40]. Therefore, these effects of Aloe vera might reduce the causes of inflammatory process, the effects and leukocyte adherence after gastric ulcer is induced by 20% acetic acid.

Aloe vera and sucralfate could reduce TNF-α level on days 1 and 8 after induction of gastric ulcer (Figure 2). Aloe vera has cytoprotective effect on gastric mucosa by stimulating endogenous prostaglandins production[20]. Su-cralfate is a cytoprotective drug which also stimulates PG production. Prostaglandins (PGs), especially prostaglandin E2 (PGE2) can protect gastric mucosa from various irri-tants, promote mucus production and increase mucosal blood flow[41-43]. It was reported that PGE2 plays a role in modulating TNF-α production and is also a potent inhibitor of neutrophil adherence and chemotaxis[44]. Ding et al[45] reported that PGE2 inhibits TNF-α release in gastric mucosa and reduces in neutrophil activation and subsequently ischemia and mucosal damage. They also showed that inhibition of TNF-α by PGE2 could result in the reduction of neutrophil CD11b/CD18 and endothelial ICAM-1 expression directly or indirectly, thus subsequently reducing neutrophil adhesion on vascular wall.

In our study, Aloe vera and sucralfate could elevate IL-10 level on days 1 and 8 after induction of gastric ulcer. IL-10 is an anti-inflammatory cytokine produced by various cells including monocytes/macrophages and T lymphocyte. IL-10 can inhibit cytokine synthesis by macrophages[46]. In addition, the mild anti-inflammatory effects of IL-10 may be due to the suppression of TNF-α production[47]. Bodger et al[48] showed that mucosal secretion of IL-10 and TNF-α is increased in H pylori gastritis. IL-10 may be protective and can limit tissue damage caused by inflammation. Therefore, elevation of IL-10 can down-regulate TNF-α production in macrophage.

Aloe vera and sucralfate could reduce inflammation and promote gastric ulcer healing, which has been con-firmed by histopathological examinations. Aloe vera and sucralfate promote epithelial cell proliferation, elongation and dilatation of oxyntic grand. Aloe vera and sucralfate have a cytoprotective effect on gastric mucosa by stimu-lating PGE2 production. PGE2 plays an important role in the maintenance of mucosal integrity and mucus pr-oduction. It was reported that Aloe vera could promote burn wound healing in rats[37,38,49]. In addition, Aloe vera could induce angiogenesis in vivo[5], which plays an important role in wound healing. Aloe vera can result in reduced vasoconstriction and improve perfusion of gastric mucosal capillaries, thus promoting ulcer healing[13,50,51]. Furthermore, gastric acid is considered as an important aggressive factor in the stomach and is known to produce gastric injury[52]. Aloe vera is able to decrease gastric acid secretion and increase mucus secretion[53].

In conclusion, Aloe vera acts on inflammation and promotes ulcer healing. Aloe vera might be used as a therapeutic agent for gastric ulcer patients.