AIM: To evaluate the prevalence of Giardia lamblia (G. lamblia) infection in patients with irritable bowel syndrome (IBS) and dyspepsia and to establish which is the most accurate test to diagnose the infection in this setting.

METHODS: One hundred and thirty-seven patients who consecutively attended the Outpatient Gastroenterology Clinic for the first time between January 2002 and December 2003 due to symptoms of IBS and/or dyspepsia were recruited. All patients underwent clinical evaluation, first-step haematology and chemistry tests, serologic assays for celiac disease, lactose-H2 breath test, abdominal ultrasonography, and esophagogastroduodenoscopy. Helicobacter pylori status was evaluated. In patients with symptoms of IBS older than 45 years, colonoscopy was also performed. In all patients, duodenal biopsies and stool samples were examined for trophozoites and cysts of G. lamblia by several methods.

RESULTS: G. lamblia was identified in 9 patients. The following diagnoses were also made: IBS (100/137, 73%), functional dyspepsia (62/137, 45%), organic dyspepsia (33/137, 24%), and lactose intolerance (75/137, 55%). A significant association was found between giardiasis and H pylori infection (χ2 = 6.632, OR = 12.4, CI = 1.5-68.1). There were no symptoms that reliably allowed the recognition of giardiasis. Direct search of the parasite in duodenal biopsy and stool sample examinations gave concordant results in all cases while histological examination of duodenal biopsies displayed a low sensitivity (e.g., 22.2%).

CONCLUSION: In this consecutive series, diagnosis of G. lamblia infection accounted for 6.5% of patients with IBS and dyspepsia. Duodenal biopsies for diagnosis of giardiasis may be unnecessary if stool sample examination is performed.

Giardia lamblia is a cosmopolitan parasite with worldwide distribution and the most common protozoan isolated from gastrointestinal tract[1]. The prevalence of infection varies from 2%-7% in industrialized countries to 40% in tropical/subtropical regions with poor sanitation and hygienic conditions[2-5].

Giardiasis typically occurs following the ingestion of water or foods contaminated with fecal material containing cysts, and the infective dose may be as low as 10 cysts. The clinical aspects of giardiasis are largely nonspecific. The infection can be asymptomatic or patients may present with extraintestinal symptoms, such as fever, maculopapular rashes, pulmonary infiltrates, lymphadenopathy, polyarthritis and urticaria. However, the most common symptoms are diarrhea, abdominal pain, bloating, flatulence and weight loss resulting from malabsorption[6]. Since these symptoms may overlap those of patients with other gastrointestinal disorders[7-9], it is not clear when the infection should be suspected. Classically, diagnosis of giardiasis is performed by microscopic examination of stool samples and/or duodenal biopsies and further methods include immunocromathography and immunofluorescence on stool samples. There are few studies comparing the diagnostic proficiency of the methods using either stool or duodenal biopsy samples.

The aim of this study was to evaluate the prevalence of G. lamblia infection in patients with irritable bowel syndrome (IBS) and dyspepsia and to establish the most accurate test for its diagnosis in this setting.

Four hundred and thirty-five consecutive patients attending our hospital for the first time between January 2002 and December 2003 on two days of the week (Monday and Wednesday) due to symptoms of IBS who satisfied Rome II criteria[10] and/or dyspepsia were considered for the study. Patients with alarm features (such as weight loss, dysphagia, vomiting, bleeding), familiarity for gastrointestinal neoplasia and inflammatory bowel disease were excluded as well as patients who took nonsteroidal anti-inflammatory drugs and proton pump inhibitors in the last 15 days and antibiotics in the last 30 days. Patients with symptoms lasting more than one year were also excluded. Finally, 137 patients (48 M, 89 F; median age 39 years, range 19-77 years) were enrolled.

The presence of the parasite was evaluated by three different approaches: direct search of the parasite in the duodenal biopsy samples with or without use of fixation and dyes, histological examinations of other aliquots of the above bioptic samples, and parasitological evaluations of stool samples.

Search of the parasite in duodenal biopsy samples: Duodenal biopsies were obtained during the upper gastrointestinal endoscopy, immediately submitted to microbiology laboratory where they were put into a sterile plastic container filled with 10 mL of sterile saline. The samples were processed within 2 h of arrival in the laboratory. Wet mount preparations were obtained by cutting the original biopsy into 0.5 mm pieces on a glass slide, with the help of a razor blade and a plastic pipette tip. Then such pieces were suspended in 2 drops of sterile saline and a cover glass was put on them. Microscopic examination for motile organisms was carried out using low and high dry power (× 200 and × 400). Permanent stains were prepared as reported above. However the biopsy pieces were air dried, fixed and the giemsa (Giemsa Plus, Trend Scientific) or trichrome staining (Trichrome Stain, Scientific Device Laboratory Inc., Des Plaines, IL, USA) were carried out following the manufacturer’s instructions. Also the vital staining with acridine orange was used on unfixed specimens examined by confocal microscopy to help identify the parasite and address both the mobility and some details of its cytostructure.

Histology of bioptic samples: Duodenal biopsies obtained during the upper gastrointestinal endoscopy were also submitted to the Pathology laboratory, where the specimens where paraffin-included, stained with hematoxylin-eosin and examined for Giardia trophozoites as well as for inflammatory infiltrate particularly of plasma cellular type.

The microbiologist (GM) and pathologist (AA) were blinded to the clinical and laboratory data.

The relation between presence of giardiasis and H pylori infection was evaluated with χ2test and odds ratio (OR). Data were given together with 95% confidence interval (CI).

G. lamblia infection was found in 9 of the 137 patients (6.5%). According to the clinical and laboratory evaluations, the following diagnoses were also made: IBS, lactose intolerance, functional and organic dyspepsia, colon diverticulosis, celiac disease, inflammatory bowel disease, gastric cancer, colon cancer, and collagenous colitis (Figure 1). All patients with giardiasis (7 M, 2 F; median age: 38 years, range 26-61 years) had nonspecific (mostly mild) symptoms largely overlapping those complained by patients without giardiasis (Table 1). Indeed, according to the clinical and laboratory findings, these patients were considered affected also by other functional and organic disorders (Table 1). In patients with giardiasis, blood examination was normal with only one patient showing a moderate eosinophilia (1.190/μL; normal range: 0-500/μL). Direct search of the parasite in duodenal biopsy (Figures 2A, 2B) and stool sample (microscopic) examination (Figures 2C, 2D) were concordantly positive (9 of 137 patients) and negative (128 of 137 patients) for G. lamblia, while histological evaluation of duodenal biopsy was positive in only two cases (2 of 137 patients) and negative in the remaining (135 of 137 patients) (Table 2). Using as reference the former two tests, the sensitivity and specificity of the histological examination of duodenal biopsy for the diagnosis of giardiasis were 22.2% and 100%, respectively. 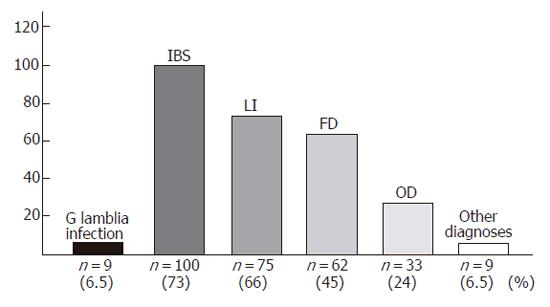 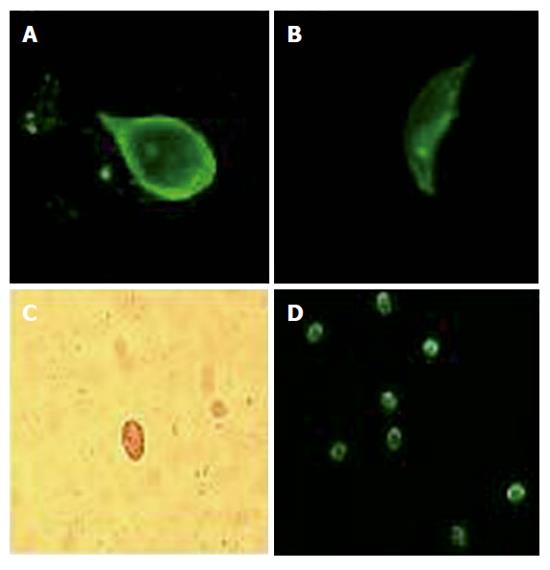 Figure 2 Confocal microscopy images (A and B) of G. lamblia trophozoite (x1000) in duodenal bioptic sample, using acridine orange as a vital stain. A: a dorsal projection showing the peculiar tear-shaped cell with flagella. B: an unusual flank projection shows the nuclei on the back of the ventral disk. C: G. lamblia cysts (x200) microscopic images after a wet mount with Lugol’s iodine of fecal specimens. D: G. lamblia cysts (x200) in stool sample following formalin/ether enrichment of filtered samples and staining with a direct fluorescent antibody.

This study aimed at investigating the impact of G. lamblia infection on patients who complained of symptoms referring to IBS and dyspepsia. In order to prevent information and observational bias, we properly excluded patients who have had a previous gastroenterological consultation, those with symptoms lasting more than one year and those who had been recently taking drugs that might interfere with complaints and laboratory investigations. Furthermore, to minimize the presence of serious illness, patients complaining of alarm symptoms were excluded. In the consecutive series of 137 patients with symptoms of IBS and/or dyspepsia, the prevalence of giardiasis was 6.5% (9/137). Possibly due to the selection of a symptomatic study population, this figure is slightly higher than the average in the general population in a Western country[2-5]. Nevertheless, no comparisons can be made with the incidence of giardiasis in the asymptomatic population coming from our geographical area.

Furthermore, an important finding of this prospective study is that no symptoms could reliably discriminate patients with giardiasis from those without the parasite. Giardiasis may be present in patients with other gastrointestinal disorders as observed in this study, it seems that symptoms of one disease may overcome/overlap those of the other. Nevertheless, the prevalence of giardiasis in patients suffering from IBS and/or dyspepsia can be considered as the cause of 1BS and/or dyspepsia.

Another important finding of this study involves the diagnostic procedures to be taken into account when dealing with G. lamblia infection. The data showed that histological examination of duodenal biopsies for G. lamblia was unsuitable due to an unacceptable rate of false negative results (e.g., 22.2% sensitivity). At the same time, it has been shown that stool examination is as accurate as the direct search of the parasite in the duodenal samples. Consequently, when a skilled microbiologist and appropriate techniques are available, duodenal biopsy seems unnecessary in accurate identification of G. lamblia, thus invasive and expensive tools such as upper gastrointestinal endoscopy could be avoided.

This study also showed that giardiasis was significantly associated with H pylori infection, possibly reflecting that the two infections share a number of risk factors[11]. This association may have several clinical implications in regard to the transmission mode[12,13], the possibility of a synergy in metronidazole resistance[14], and the experimental evidence of a common pathogenesis scenario, leading to gastrointestinal metaplasia[15].

In conclusion, the prevalence of giardiasis in patients suffering from symptoms of IBS and dyspepsia is non-negligible, and duodenal biopsies for the parasite may be unnecessary if stool examination is performed.