AIM: To investigate the expression and activity of NAD(P)H quinone oxidoreductase 1 (NQO1) in human liver specimens obtained from patients with liver damage due to acetaminophen (APAP) overdose or primary biliary cirrhosis (PBC).

METHODS: NQO1 activity was determined in cytosol from normal, APAP and PBC liver specimens. Western blot and immunohistochemical staining were used to determine patterns of NQO1 expression using a specific antibody against NQO1.

CONCLUSION: These data demonstrate that NQO1 protein and activity are markedly induced in human livers during both APAP overdose and PBC. Up-regulation of this cytoprotective enzyme may represent an adaptive stress response to limit further disease progression by detoxifying reactive species.

Although NAD(P)H quinone oxidoreductase 1 (NQO1) has been historically associated with generation of hydroquinones from reactive quinones, additional substrates including nitrosoamine, nitro and azo chemical moieties have been identified. NQO1 is also capable of scavenging superoxide anions generated during oxidative stress and regenerating reduced forms of protective endogenous antioxidant compounds.

There is very low expression of NQO1 mRNA and protein in normal human livers, with slightly greater mRNA levels observed in biliary epithelial cells[1,2]. NAD(P)H quinone oxidoreductase 2 (NQO2) mRNA is greater in hepatocytes compared to NQO1 mRNA and is in turn thought to play a more critical role in maintaining low levels of quinones in hepatocytes[2]. Consequently, it has been suggested that human NQO1 does not play a major role in hepatic xenobiotic metabolism under normal conditions[3].

Instead, NQO1 may be more important during periods of hepatic oxidative stress and damage. NQO1 mRNA protein and activity are markedly increased in mouse liver following bile duct ligation, a model of obstructive cholestasis (José Manautou, unpublished observations). Similar elevations in rodent NQO1 mRNA also occur after exposure to centrilobular hepatotoxicants such as acetaminophen (APAP), carbon tetrachloride and bromobenzene[4,5]. Although different regions of the liver lobule are injured in cholestasis and drug-induced hepatocellular necrosis, oxidative stress contributes to the pathogenesis of both diseases. We hypothesize that up-regulation of NQO1 may represent a common response to liver injury with an oxidative stress component.

NQO1 activity was calculated by measuring the colorimetric oxidation of NADPH to NADP+ using DCPIP as substrate. The disappearance of NADPH was measured at 600 nm for over 1 min as described by Ernster with modifications by Benson[6,7]. NQO1 activity was measured in 1-mL reactions (27°C) containing liver cytosol, 200 µmol/L NADPH, 40 µmol/L DCPIP and Tris-HCl buffer (25 mmol/L Tris-HCl, pH 7.4, 0.7 mg/mL bovine serum albumin). Parallel reactions were performed in the presence of 20 µmol/L dicumarol. The rate of dicumarol-sensitive NQO1 activity was determined as the difference between the uninhibited and dicumarol-inhibited rates and was normalized to total cytosolic protein as previously described[6].

Immunohistochemistry was performed on tissue sections cut from archival paraffin blocks as previously described[1]. Negative control staining was performed by incubating the sections without primary antibody. The sections were photographed on an Olympus BX50 microscope equipped with a QImaging MicroPublisher 3.3 RTV camera. Images were acquired with QCapture Pro software. 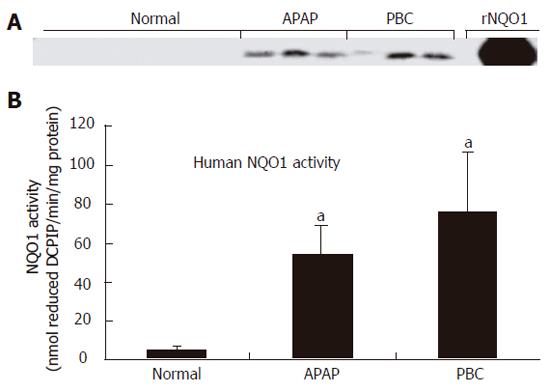 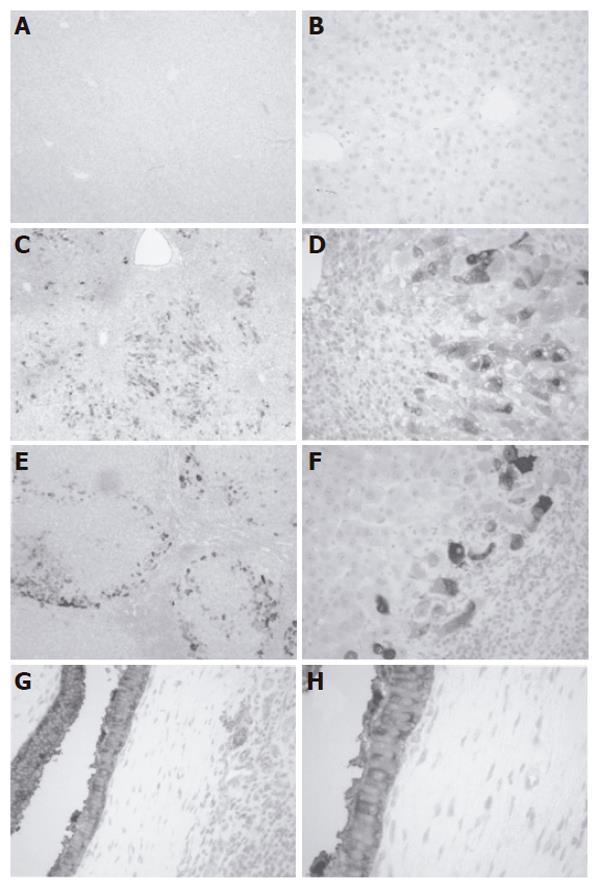 This is the first report documenting strong induction of NQO1 protein and activity in livers from individuals with two very different types of liver injury; exposure to toxic amounts of APAP or chronic PBC. Drug-induced liver injury is the most common cause of acute liver failure, with APAP exposure accounting for more than 40% of cases[8]. Ingestion of supratherapeutic amounts of APAP results in degeneration and necrosis of centrilobular hepatocytes. Conversely, PBC is a progressive disease primarily attributed to autoimmunity. Chronic inflammation and destruction of bile ducts during PBC cause biliary hyperplasia, marked fibrosis, and cirrhosis in later stages. The specificity of NQO1 up-regulation during liver damage is unknown. Increased NQO1 expression in APAP and PBC livers is similar to that in non-viral human hepatocellular carcinoma[9]. Conversely, livers from patients with type B or C hepatitis-induced hepatocellular carcinoma, focal nodular hyperplasia or cholangiocarcinoma do not demonstrate altered NQO1 levels[2,10]. Together, these and previously reported data suggest differential regulation of NQO1 in human liver disease of varying etiologies.

Transcription factor NFE-2-related factor 2 (Nrf2) is the key regulatory pathway for NQO1 expression. Oxidative stress causes translocation of Nrf2 to the nucleus and binding to antioxidant response elements in the promoter region of numerous detoxification genes, including NQO1[11]. Subsequent gene activation leads to production of NQO1 and other proteins involved in cytoprotection. With the use of Nrf2-null mice, NQO1 expression and induction have been shown to be Nrf2-dependent[12]. Activation of the Nrf2 signaling pathway during different types of human liver disease may be responsible for NQO1 up-regulation in drug-induced damage, cirrhosis and carcinoma.

As an Nrf2 target gene, NQO1 plays a role in cellular antioxidant defense beyond general drug metabolism, which includes dismutation of superoxide[13]. Therefore, NQO1 may be a scavenger of superoxide anions that are generated during both APAP toxicity and PBC[14]. Similarly, NQO1 also limits oxidative stress and lipid peroxidation by converting endogenous antioxidants (such as vitamin E) back to their more active, reduced forms[13,15].

Loss of NQO1 function heightens susceptibility of rodents and humans to a number of diseases as demonstrated in transgenic mice lacking NQO1 and humans with a naturally-occurring NQO1 polymorphism. NQO1-null mice exhibit increased susceptibility to menadione-induced hemolytic anemia while patients possessing a C → T substitution at residue 609 of NQO1 have lower levels of NQO1 protein and exhibit an increased risk of benzene toxicity, urothelial tumors, acute myelogenous leukemia, and numerous additional cancers[13,16,17].

Since the pathogenesis of APAP hepatotoxicity is mediated by an electrophilic quinone, NQO1 might possess the ability to convert the APAP metabolite back to parent compound[18]. Limited data suggest that inhibition of NQO1 by dicumarol potentiates APAP toxicity in mice[19]. Conversely, administration of Nrf2 activating compounds, such as oltipraz, protects hamsters against APAP hepatic damage by inducing detoxification pathways including NQO1[20,21].

The relative constitutive level of hepatic NQO1 among rodents and humans may also explain in part the different susceptibility to APAP hepatotoxicity across species. NQO1 activity is markedly higher in rat liver compared to mouse and human livers. Along the same line, rats exhibit a greater resistance to APAP-induced liver damage compared to mice and humans. Although additional variations in APAP metabolism between rodents and humans are known, differences in basal NQO1 activity among these species may also be a determinant of susceptibility to APAP.

In conclusion, NQO1 is upregulated in APAP–induced and cholestatic human hepatic injury, suggesting that this Nrf2 gene may limite the progression of these liver diseases.