Paraduonenal hernia is an uncommon cause of small bowel obstruction. It has been reported that the most common type of internal hernia, reported in more than 50% of internal hernia cases. We report a case of left paraduodenal hernia complicated by ascending colon cancer, which was diagnosed correctly with abdominal CT. This case was confirmed at surgical operation and the clinical and imaging findings of these hernias were reviewed in Japanese literature. 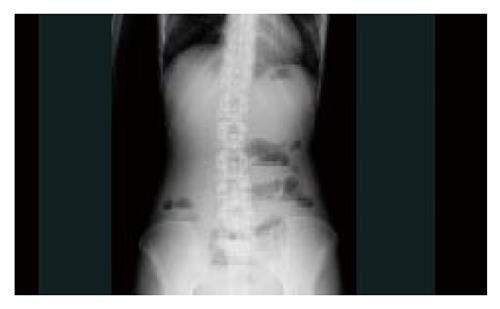 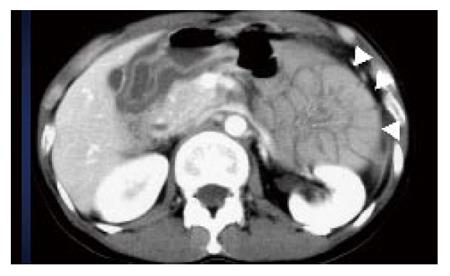 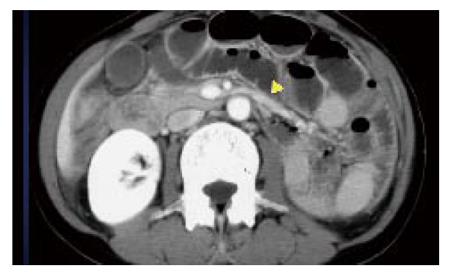 Laparotomy revealed the hernia orifice and hernia sac was located in left mesocolon (Figure 4). IMV was located in the upward of the anterior portion of the hernia sac. Approximately 40 cm of jejunum was within a hernial sac. There were no volvulus or ischemic changes of the jejunum. The patient underwent right hemicolectomy with an end-to-end ileocolonic anastomosis. Anterior hernial sac incision was also performed. The postoperative course was uneventful. 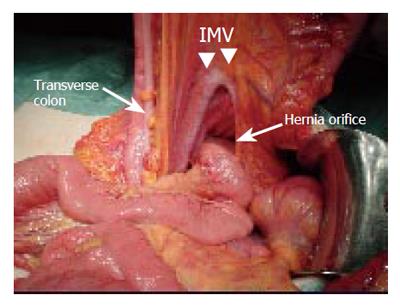 Figure 4 Large orifice of the hernia sac (white arrow) in the transverse mesentery and IMV formation. The small intestine had herniated through hernia orifice.
DISCUSSION

Internal hernia complicated by colorectal cancer was reported only 3 cases. In our patient case, the origin of the bowel obstruction was not caused by left paraduonenal hernia but obstructed by advanced ascending colon cancer. Clinical findings of paraduodenal hernias are variable, ranging from mild digestive complaints to acute or chronic symptoms of obstruction, sometime asymptomatic.

Enhanced CT is helpful in establishing a preoperative diagnosis of the presence of paraduonenal hernia. The specific findings of paraduonenal hernia by CT scan show clustering of small bowel loops, well-circumscribed edge that corresponds to the hernia sac, stretched and engorged mesenteric vessels. In the case of left paraduodenal hernia, IMV were usually located in the upward and anterior displacement of the hernia sac. Abnormalities in the mesenteric vessels including engorgement, crowding and stretching, and displacement of the main mesenteric trunks to the left are important clues to this diagnosis[1,10].

Paraduodenal hernias are believed to occur due to a congenital defect in the descending mesocolon. The small bowel may occur to invaginate into this space, the fossa of Landzert, which lies to the left of the fourth portion of the duodenum. The herniated small-bowel loops may become trapped within this mesenteric sac.

Treatment for the duodenal hernia is based on reduction of the hernia sac and closure of the defect or incision of the hernia sac[11,12]. Paraduodenal hernia induces an over 50% lifetime threat of incarceration, leading to bowel obstruction and strangulations. Therefore, surgical operation should be performed to avoid these complications. Indeed, 20% cases of internal herinas needed for small intestinal resection caused by bowel necrosis[6,7]. In general, postoperative course was uneventful, recurrence case was rare. Recently, laparoscopic surgery for left paraduodenal hernia without bowel necrosis may be useful surgical method because of its minimal invasiveness and aesthetic advantage[13,14]. In our case, we performed anterior hernia sac incision following the right hemicolectomy. Surgeons should pay attention to the mesenteric vessels located near the hernia sac orifice. The displacement of the main mesenteric trunks may cause vessel injury during surgical treatment.