METHODS: Light and electron microscopy as well as immunohistochemistry were used to observe the distributive and morphological changes of TIDCs and TILs.

CONCLUSION: The number of TIDCs and TILs is related with tumor progression There exist close relationships among TIDCs, TILs and tumor cell.

Antitumor effects of human body are mainly achieved by tumor infiltrating immunocytes, including TIDCs, TILs, natural killer(NK) cells and lymphokine-activated killer(LAK) cells. Because of their prominent role in antitumor effects, TIDCs and TILs have drawn more and more attention. DCs are the most powerful professional antigen-presenting cells (APCs) so far. Immunophenotype and function of DCs in biological therapy of tumor are the focus of immunological study [1,2]. Although studies on tumor immunotherapy involving injection of DCs cultured in vitro are reported [3-5], infiltrating DCs in tumor microenvironment have not been fully investigated and studies usually concentrate on the correlation between infiltrating DCs and tumor progression[6,7]. Morphological studies on the relation among TIDCs, TILs and tumor cells, are few. TILs are heterogenous lymphocytes, most of them are T lymphocytes. TILs are a new kind of antitumor effectors after LAK cells. In this study, the morphology of TIDCs and TILs in earlier and later stage of human rectal cancer was investigated, which may provide morphological evidence for antitumor effect of tumor infiltrating immunocytes.

Fresh rectal cancer samples were obtained during surgery. Immediately after surgical resection, tissues were rinsed in redistilled water and then in 0.2 mol/L phosphate-buffered saline (PBS). Tumor-surrounding tissues were obtained and fixed in 3% glutaraldehyde for transmission electron microscopy or in 10% neutrally buffered formalin solution. The cut into slices, embedded in paraffin and sectioned at 4 μm for HE and immunohistochemical staining. The deparaffinized sections were washed with PBS. Primary antibodies used were rabbit-anti human S-100 protein and CD3 (Boster Biological Technology Ltd). Secondary antibody used was mouse-anti rabbit IgG. The procedure was performed with SABC kit following the manufacturer’s instructions.

Under the light microscope, the number of infiltrating S-100 (+) and CD3 (+) cells in each section was calculated under 5 high power fields (×400) and statistically analyzed.

RESULTS
Observation of HE and immunohistochemical staining under light microscope

TIDCs were mainly seen in tumor-surrounding area, only a small number of TIDCs were located in cancer tissue scatteredly by HE staining. Using anti-S-100 antibody with the SABC method, Brown S-100 (+) DCs could be observed in each section. Comparatively large DCs exhibited many dendritic protrusions, mainly located in tumor-surrounding tissue. The number of TIDCs was large in the earlier stage (Figure 1A) and comparatively small in the later stage (Figure 1B). The number of TIDCs in earlier stage was significantly higher than that in later stage and the difference was statistically significant (P < 0.01, Table 1). 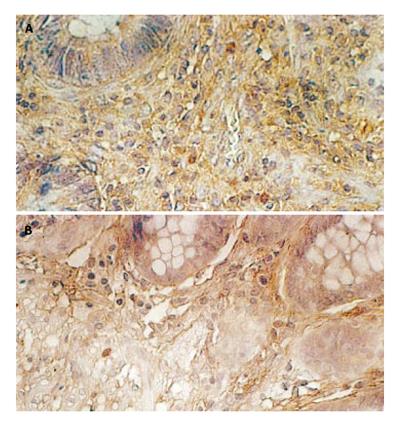 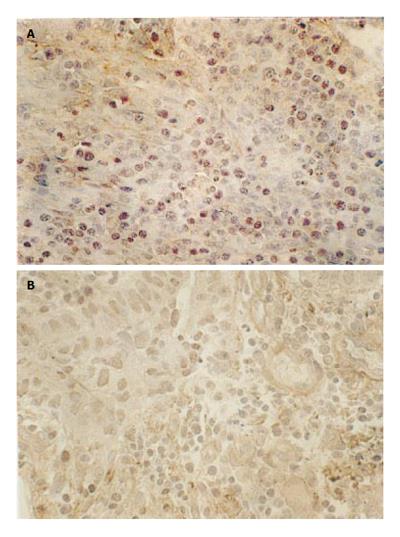 Figure 2 TILs in earlier (A) and later (B) stages of rectal cancer. (magnification: A, B x 400)
Transmission electron microscopy

Under electron microscope, TIDCs were seen in tumor-surrounding tissue. TIDCs were irregular in shape and displayed many dendritic cytoplasmic protrusions with varying width. The nuclei were irregular in shape and the nucleoli were small. Heterochromatin was highly marginated along the nuclear membrane. Mitochondria and endoplasmic reticulum were prominent in these cells. A fraction of endoplasmic reticulum and some mitochondria were expanded (Figure 3). 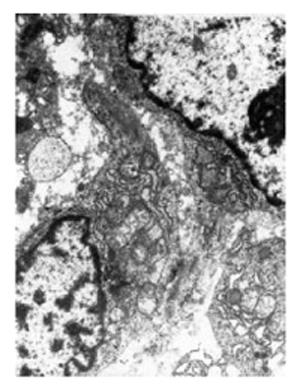 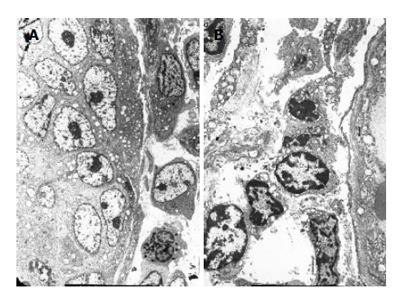 DCs are the most powerful professional antigen-presenting cells (APCs)[1]. Studies on immunophenotype and function of DCs are now available[2-5]. Morphological studies on DCs and TIDCs are few. In this study, the morphology of TIDCs and correlation between TIDCs, TILs and cancer cells in human rectal cancer were investigated.

Antitumor immune responses of human body are mainly centralized in local cell-mediated immunity. The infiltrating degree of lymphocytes surrounding tumor tissue reflects the status of antitumor immune responses of human body. Activation of T lymphocytes needs the assistance of APCs. DCs are the most important APCs in human body and are closely related with the function of T lymphocytes. TILs are heterogenous lymphocytes, most of which are T lymphocytes. TILs play an important role in immunity and anti-tumor effects[8,9]. In our study, TILs were closely related with tumor immunity and mainly distributed in adjacent tissue of cancer, suggesting that localization of TILs in tumor-surrounding tissue limits the growth of cancer and confines cancer to a local site, which is the first barrier of anti-tumor effects of human body and contributes to immune response and prevents tumor spreading, which is the second barrier of anti-tumor effects of human body. Infiltration of TILs represents anti-tumor immune responses of human body. The infiltrating degree of TILs plays a decisive role in invasion and metastasis of tumor as well as prognosis of patients. In our study, the number of TILs in earlier stage of rectal cancer was significantly higher than that in later stage (P < 0.01), demonstrating that the number of TILs is related with the progression of rectal cancer.

DCs play an important role in tumor immunity. The powerful antigen-presenting function of DCs can induce efficient and specific anti-tumor immunity activated CTLs can kill tumor cells[10-12]. In this study, TIDCs were closely contacted with TILs. TILs were clustered around TIDCs and cluster of DCs-lymphocytes cluster was formed. Glycogen granules could be seen between TIDCs and TILs. All these suggest that there exists some relation between TIDCs and TILs. It has been reported that DCs mainly present antigen to lymphocytes, stimulate naïve T lymphocyte proliferation and activation to kill tumor cells [13]. The contact of TIDCs and TILs observed in our study may provide morphological evidence and suggests that TIDC can present antigen to TILs and activate TILs. Moreover, fraction of endoplasmic reticulum and some mitochondria in DCs were expanded. These data suggest that these active cells can capture and identify antigens by their cytoplasm protrusions, and subsequently transmit antigens to lymphocytes and prime anti-tumor immunity to kill tumor cells through cytotoxicity.

DCs participate in local anti-tumor immune response and have corresponding changes during oncogenesis and tumor progression, suggesting that DCs are closely related with anti-tumor immunity. DCs are not only professional APCs, but also immunological adjuvant. DCs play an important role in immunoregulation. It has been shown that antigen-sensitized DCs can induce specific CTL in vivo and directly inhibit or kill tumor cells [13-16]. But whether DCs can directly inhibit the growth of tumor in vivo or directly kill tumor cells remains unclear and should be further studied.