AIM: To evaluate the effects of betaine on the ethanol-induced secretion of IGF-I and IGFBP-1 using radioimmunoassay and Western blotting, respectively, in primary cultured rat hepatocytes.

METHODS: Hepatocytes isolated from male Sprague-Dawley rats were incubated with various concentrations of ethanol and PD98059 procedures. The hepatocytes were also treated with different doses of betaine (10-5, 10-4, and 10-3 mol/L). We measured IGF-I and IGFBP-1 using radioimmunoassay and Western blotting, respectively.

CONCLUSION: Betaine modulates the secretion of IGF-I and IGFBP-1 via the activation of p42/44 MAPK in primary cultured rat hepatocytes. Betaine also alters the MAPK activations induced by ethanol.

Betaine, an organic osmolyte, is a precursor of S-adenosylmethionine (SAMe) in the liver. It has been shown that betaine administration has the capacity to elevate hepatic levels of SAMe and to prevent ethanol-induced fatty liver[1]. Kanbak et al[2] reported that betaine protects the liver from ethanol-mediated hepatotoxicity in rats, and it was reported recently that it also protects the liver from ischemia/reperfusion injury, niacin toxicity, CCl4-, hyperosmolarity-, and ethanol-induced apoptosis.

Alcohol consumption is associated with the nutritional metabolism system, which reduces hepatic glucose production and insulin secretion, and increases protein catabolism and triacylglycerol levels. The liver is predominantly responsible for ethanol metabolism and it appears to be the primary source of blood-borne insulin-like growth factor (IGF)-I. Impairment of hepatic synthesis could be responsible for at least a portion of the alcohol-induced decrease in serum levels of IGF-I. Alcohol can affect various organ conditions, thus alcohol consumption may regulate IGF, IGF binding protein (IGFBP) and the IGF-I receptor, which may be involved in growth disorders. It has been shown that IGFBPs are associated with alcohol metabolism[3,4], and we found recently that alcohol administration not only reduces the level of IGF-I, but also increases the level of IGFBP-1 in rat liver, kidney, and serum[5]. It may also contribute to the metabolic dysfunction that occurs following chronic alcohol consumption. Acute alcohol ingestion also reduces the level of IGF-I in serum, but promptly increases serum IGFBP-1 levels in human subjects[3]. In a pilot study, we observed a reduction in the level of IGF-I in alcohol-treated primary rat hepatocytes.

Hepatocytes were isolated from male Sprague-Dawley rats weighing 200-300g by a two-step perfusion procedure with 0.5g/L collagenase that has been described previously (Seglen, 1976: Weng and Shukla, 2000). Cell viability, as assessed by exclusion of trypan blue, was 90% ± 5%. Isolated hepatocytes were plated onto collagen-coated plastic culture dishes (60 mm in diameter) at a density of 5 × 104 cells/cm2 in William’s medium E containing 100ml/L fetal bovine serum (FBS) in an incubator with an atmosphere of 50ml/L CO2. After 3 h, the medium was replaced with FBS-free-Williams medium E and various concentrations of ethanol and PD98059 were carefully added to the cells. The dishes immediately were sealed tightly with parafilm and the cells were incubated in this way for 10-180 min at 37°C.

Recombinant human IGF-I was iodinated to a specific radioactivity of 5.55 - 11.10 MBq/g with the isotope I125 using a modified version of the chloramin-T method (Kodak, NY, USA). The specific activity of the iodinated IGF-I was approximately 2.22 - 4.07 MBq/g protein. The iodination mixture was purified on a Sephadex G-50 column (150 cm) and pre-equilibrated with phosphate-buffered saline (0.1 mol/L, pH 7.4). Serum and tissue IGFBPs were separated using the method of Lee et al[6], and IGF-I immunoreactivity was determined using the method of Lee et al[7]. IGF-I data are expressed in terms of nanograms of pure human IGF-I per milliliter assuming equal cross-reactivity of rat and human IGF-I in the RIA. Fifty microliters of rat polyclonal IGF-I antibody diluted to 1:1,500 was added to 100 μL of each sample/standard and then incubated for 1 h at room temperature. [125I]-IGF-I (20000 cpm) was then added, and the sample/standard was incubated for an additional 18 h at 4°C. Fifty microliters of horse serum (Sigma) was added to the incubated sample, which was then centrifuged at 3000g for 30 min. The supernatant was discarded, and the radioactivity of the precipitate containing bound [125I]-IGF-I was counted in a gamma scintillation counter (Wallac, Finland). All assays were performed in duplicate. Intra- and interassay coefficients of variation for IGFs were 8% and 10%, respectively.

All experiments were repeated at least three times. The data obtained from this investigation were analyzed using ANOVA and Student’s t test and are expressed as mean ± SD values.

Chronic alcohol treatment is associated with liver and kidney damage. IGF is the major growth factor that is affected by alcohol consumption. Recently, we found that alcohol reduces the level of IGF-I and increased that of IGFBP-1 in the serum, liver, and kidney of Sprague-Dawley rats[5]. To examine the possible effect of betaine, an osmolyte, on the regulation of alcohol-stimulated IGF-I and IGFBP-1 secretion, we measured the secretion of IGF-1 and IGFBP-I after cotreatment with betaine (for 300 min) and alcohol (for 180 min) in primary cultured rat hepatocytes. Whereas the secretion of IGF-I was significantly reduced by alcohol treatment alone, co-treatment with betaine resulted in IGF-I secretion being maintained at control levels (Figure 1A, P < 0.05). In addition, betaine reduced alcohol-stimulated IGFBP-1 secretion (Figure 1B). Taken together, these results suggest that betaine ameliorates the alcohol-mediated secretion of IGF-I and IGFBP-1 in primary cultured rat hepatocytes. 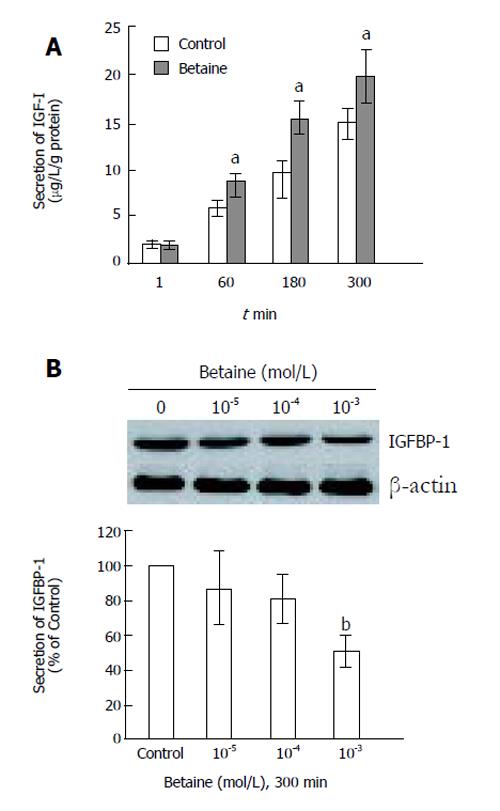 To determine the molecular mechanism by which betaine stimulates IGF-I and reduces IGFBP-1 secretion in rat hepatocytes, we examined the involvement of MAPK. The effects of phosphorylation of p42/44 MAPK on the secretions of IGF-I and IGFBP-1 were monitored for 300 min after treatment with betaine alone (10-3 mol/L) and with betaine (10-3 mol/L) after pretreatment with PD98059 (10 µmol/L). Pretreatment with PD98059 not only significantly decreased betaine-stimulated IGF-I secretion (Figure 3A), but also attenuated the betaine-induced reduction in IGFBP-1 secretion (Figure 3B). 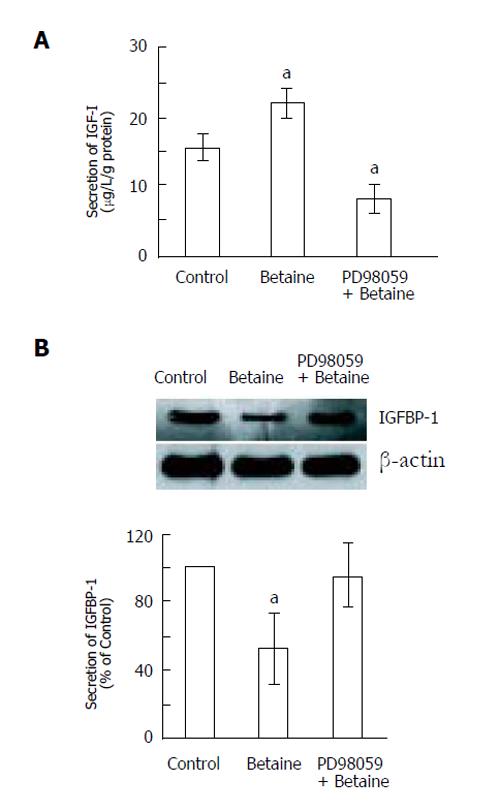 Given the effects of PD98059 on IGF-I and IGFBP-1 secretion, we performed an immunoblot analysis with antibody binding to phosphorylated MAPK 1/2 molecules. Whole lysates of cells treated with betaine were subjected to 100 g/L SDS-PAGE and blotted with phospho-p44/42 MAPK. The phosphorylation of MAPK 1/2 was increased at 60, 180, and 300 min after betaine stimulation, reaching a maximum after 300 min (Figure 4A). Betaine stimulated the phosphorylation of p42/p44 MAPK in a dose-dependent manner (Figure 4B). A significant (P < 0.05) phosphorylation of p42/p44 MAPK was observed at a betaine concentration of 10-3 mol/L compared with the control (Figure 4B). Western blot of anti-phospho-MAPK was then reprobed with a specific antibody for MAPK 1/2. The resulting bands coincided with the immunoreactive bands of MAPK 1/2 (Figure 4B). Betaine ameliorated the activation of MAPK, although alcohol treatment inhibited the basal phosphorylation of p42/44 MAPK (Figure 4C). The effect of betaine on MAPK activation was also monitored at 300 min after treatment of the hepatocytes with betaine (10-3 mol/L); betaine induced the activation of p42/44 MAPK. 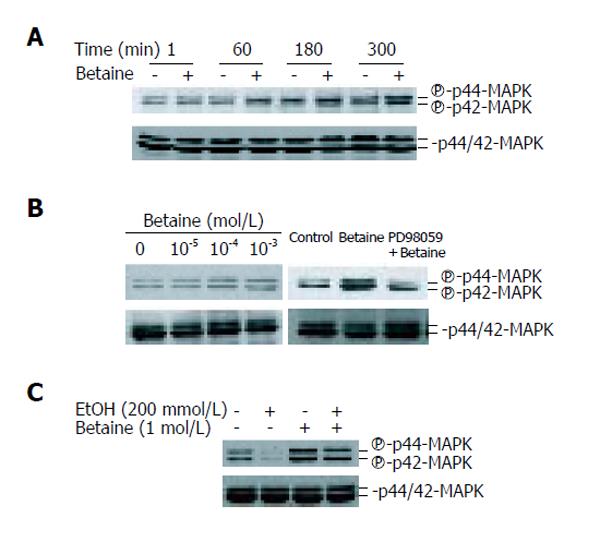 Alcohol abuse is associated with deleterious effects on several organs of the body, particularly the liver and brain[8]. Alcohol-induced liver damage is one of the major causes of morbidity and mortality among alcoholics, exposure to ethanol leading to both short- and long-term changes in liver function. Ethanol alters hepatic carbohydrate and lipid metabolism, as well as the synthesis of protein and DNA, which leads to liver dysfunction and cirrhosis[9]. The mechanisms and mediators underlying this liver injury, however, are not clearly understood. Kanbak et al[2] reported that betaine protects the liver from ethanol-mediated hepatotoxicity in rats, and it was reported recently that betaine also protects the liver from ischemia/reperfusion injury, niacin toxicity, and CCl4-, hyperosmolarity-, and ethanol-induced apoptosis.

In the present study we found that the secretion of IGF-I, which is inhibited by ethanol, is increased by treatment with betaine, whereas that of IGFBP-1, which is increased by ethanol is reduced by betaine. It has been reported recently that lipid peroxidase activity is involved in the effects of ethanol on the secretions of IGF-I and IGFBP-1, but the underlying mechanism remains to be elucidated[10]. It has also been reported that acute ingestion of ethanol raises the plasma levels of IGFBP-1 in normal subjects[3,11]. Intake of ethanol influences the bioavailability of IGF-I in normal individuals. Barak et al[1] has shown that betaine, which is a naturally occurring substance, may be used as a protective agent against hepatotoxic substances such as ethanol and CCl4. It may prevent the generation of reactive oxygen species in hepatocytes that results from treatment with ethanol, which is thought to be responsible for attenuation of IGF-I and increase in IGFBP-1 secretion.