A 79-year-old female patient with hepatitis C virus-related liver cirrhosis was diagnosed as having hepatocellular carcinoma (HCC) with a diameter of 2.0 cm. She refused therapy for HCC. Nine months after the diagnosis, she developed dermatomyositis when the HCC enlarged to a diameter of 6.0 cm. She underwent therapy for dermatomyositis, and then transcatheter arterial chemoembolization for HCC. Although the manifestations of dermatomyositis improved and entire tumor necrosis was achieved, she died of pneumonia 2 mo after the treatment of HCC. HCC and/or chronic hepatitis C virus infection might be involved in the pathogenesis of dermatomyositis.

A 79-year-old woman was treated for HCV-related liver cirrhosis at our hospital. She received medication for the liver disease (ursodeoxycholic acid) and for epilepsy (clonazepam) due to a past head injury. There was no family history of autoimmune disease or malignancy. In October 2003, a hepatic tumor with a diameter of 2.0 cm in the right anterosuperior segment was detected on dynamic computed tomography (CT): the tumor was shown to be a hypodense lesion in the basal study which was enhanced during the arterial phase and became hypodense during the delayed phase. The serum alpha-fetoprotein (AFP) and des-gamma-carboxy prothrombin (DCP) levels were 3.4 ng/mL (normal, <10 ng/mL) and 431 mAU/mL (normal, <40 mAU/mL), respectively. Based on these findings, the tumor was diagnosed as HCC. However, the HCC was not treated at that time because the patient refused therapy.

In July 2004, she began to develop progressive muscle weakness in the extremities and systemic erythema. She was admitted to the Department of Dermatology at our hospital. On admission, her height was 146 cm and her body weight was 60 kg. A heliotrope rash in the periorbital skin, Gottron papules on the metacarpophalangeal joints, and poikiloderma on the anterior neck and upper chest were observed. There was no skin thickening of the extremities or joint swelling. Muscle examination revealed symmetrical proximal weakness: she could not rise from a chair or raise her hands up to the level of her shoulders. Table 1 shows her laboratory data on admission. Elevated serum muscle enzymes were observed. HBsAg (enzyme immunoassay [EIA], Dinabot, Tokyo, Japan) was negative. Anti-HCV antibody (second generation, EIA, Dinabot) was positive with a high titer, and HCV RNA (reverse transcription-PCR, Sionogi, Osaka, Japan) was also positive. Hypergammaglobulinemia was observed. Antinuclear antibodies were positive (1:640, homogeneous, speckled), while rheumatoid factor, myeloperoxidase antineutrophil cytoplasmic antibodies, anti-DNA, anti-Jo-1, anti-RNP, anti-SSA, and anti-SSB were all negative. Electromyography of the right biceps brachii muscle showed fibrillation and low amplitude voltage of a short duration (less than 200 mV). Skin biopsy of the left forearm showed flattened epidermis, partial liquefaction of the basal layer, scattered inflammatory cell infiltration around the small vessels, and degeneration of collagen fiber of the dermis (Figure 1). Muscle biopsy of the left triceps failed to show remarkable findings. On the basis of these findings, the diagnosis of dermatomyositis was made. Initially, 50 mg of prednisolone per day was administered, and then the dosage was gradually decreased to 15 mg/d. Skin eruption almost disappeared completely and muscle power slowly improved. Muscle enzymes also improved to the normal range. During the treatment of dermatomyositis, the patient decided to undergo therapy for the HCC. 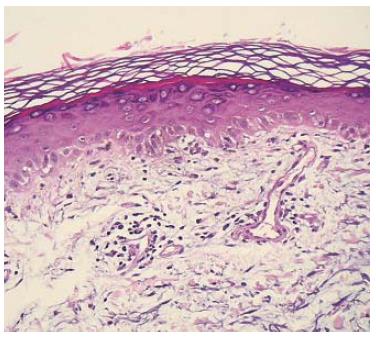 Figure 1 Hematoxylin-eosin staining of skin biopsy of the left forearm showing flattened epidermis and scattered inflammatory cell infiltration around the small vessels of the dermis (200 × magnifications).

When she was referred to the Department of Internal Medicine in August 2004, the HCC nodule was enlarged to a maximal diameter of 6.0 cm, and ascites was observed (Figure 2). The serum AFP and DCP levels also increased to 2 130.2 ng/mL and 7 423 mAU/mL, respectively. Other serum tumor markers, including carcinoembryonic antigen, carbohydrate antigen 19-9, and carbohydrate antigen 125, were all negative. No other malignancies were identified by imaging studies, such as ultrasonography and CT or esophagogastroduodenal endoscopy. In August 2004, she underwent transcatheter arterial chemoembolization for the treatment of the HCC after the ascites was controlled. After transcatheter arterial chemoembolization, entire tumor necrosis was achieved; the serum AFP and DCP levels decreased to 46.7 ng/mL and 54 mAU/mL, respectively. The clinical course of dermatomyositis was not affected by the embolization. Unfortunately, the patient died of bacterial pneumonia in October 2004. 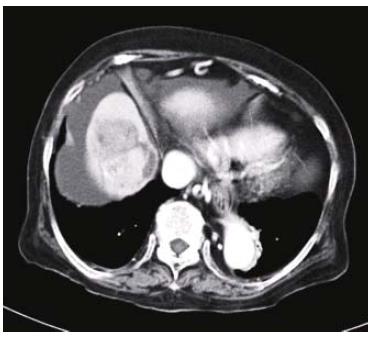 Figure 2 Contrast-enhanced computed tomography showing a hypervascular, in part, necrotic tumor in the right anterosuperior segment of the liver and ascites.
DISCUSSION

The relationship between cancer and dermatomyositis has been widely reported in the literature[1-9]. Recent population-based studies have demonstrated that 15-32% of patients with dermatomyositis are associated with various types of cancers, such as ovarian, lung, pancreatic, stomach, and colorectal cancers[1,2]. However, there have been few reports on the association between dermatomyositis and HCC[3-9]. Although the rare association might be fortuitous, a recent report described the improvement of dermatomyositis without the need of corticosteroids after the resection of HCC, supporting the hypothesis that HCC can cause dermatomyositis through a paraneoplastic mechanism[8]. In the present case, dermatomyositis occurred when the HCC increased from a baseline diameter of 2.0 cm to 6.0 cm at 10 mo. In most other reported cases, advanced HCC, more than 6.0 cm in diameter or multiple, has been found at the diagnosis of dermatomyositis[4-9]. Those reports indicate that advanced HCC might induce an autoimmune response as the trigger of dermatomyositis.

Recent studies have demonstrated that antibodies to Mi-2, a component of the nucleosome remodeling-deacetylase complex, are strongly associated with dermatomyositis (frequencies up to 31%)[18,19]. An in vitro study has shown that a 169-bp cDNA product, which is 88.8% homologous to the human Mi-2beta antigen, is identified in H4IIE rat hepatoma cells[20]; and 100% homology is found at the protein level. Based on these findings, anti-Mi-2 antibodies might be cross-reactive with HCC. Unfortunately, anti-Mi-2 antibodies were not examined in the present case. Further studies on autoantibodies cross-reacting with HCC should be undertaken to shed light on the pathogenesis of dermatomyositis associated with HCC.

In the present case, other infectious agents including echovirus, adenovirus, and coxsackievirus, which are known to cause myositis, were not examined[15-17]. Therefore, there remains the possibility that dermatomyositis of the present case might be caused by such viruses.

In summary, this report suggests that HCC, in particular advanced HCC, and/or chronic HCV infection might be factors in the pathogenesis of dermatomyositis. The mechanisms of autoimmune responses induced by such factors should be studied in the future.