We report here a case of multiple prolapsing mucosal polyps with diverticulosis in the sigmoid colon. A 52-year-old man was admitted to our hospital because of bloody diarrhea. Colonoscopy and barium enema showed multiple diverticula, markedly thickened mucosal folds and polypoid lesions with mucus on the top of them in the sigmoid colon. Endoscopic ultrasonography showed thickening of the mucosal and submucosal layers. Several endoscopic biopsy specimens were taken from the polypoid lesions. Histological examination revealed only chronic inflammatory cell infiltration. In order to obtain a definite diagnosis, we performed endoscopic jumbo biopsy for the polypoid lesions after obtaining informed consent. Histological examination revealed marked lymphocyte infiltration, hemosiderin deposits and fibromuscular obliteration in the lamina propria, features similar to those of mucosal prolapsing syndrome. After anti-diarrhetic treatment, clinical findings were improved. Thus, jumbo biopsy is useful for diagnosis and treatment of prolapsing mucosal polyps.

Cases of colonic prolapsing mucosal polyps associated with diverticulosis have recently been reported in literature[1-3]. These polyps are histologically unclassifiable polyps resembling those in mucosal prolapse syndrome (MPS). Accurate differential diagnosis between neoplastic and non-neoplastic polyps is often difficult in these disease conditions. Many cases of colonic prolapsing mucosal polyps have been diagnosed retrospectively because of the low rate of pathological diagnosis of specimens obtained by the use of usual biopsy forceps. We report herein a case of unique non-neoplastic colonic mucosal prolapsing polyps with diverticulosis successfully diagnosed by using the jumbo biopsy method.

A 52-year-old man was admitted to our hospital in April 2003 because of abdominal discomfort, mucous discharge and bloody diarrhea. He had a history of frequent diarrhea from his twenties. Laboratory tests showed an increased number of peripheral leukocytes (13 800/mm3). Barium enema showed polypoid lesions and multiple diverticula in the sigmoid colon. Colonoscopy showed multiple congested hyperemic mucosal folds and polypoid lesions with mucus on the top of them in the sigmoid colon. Slightly elevated red round patches were considered to be early minimal lesions of prolapsing mucosal polyps (Figure 1A). The surfaces of the polypoid lesions, considered to be advanced lesions, were smooth, and congested hyperemic mucosa contrasted sharply with the surrounding intact mucosa. Endoscopic examination with indigo-carmin dye spraying showed an intact mucosal pit pattern (Figure 1B). Endoscopic ultrasonography (EUS) of the early minimal lesions showed thickening of the first and second layers (mucosa) and irregular echoic lesions in the third layer (submucosa) with hypertrophy of the fourth layer (muscularis propria) (Figure 2A). EUS of the advanced lesions showed irregular low echoic lesions throughout the colonic wall (Figure 2B). Endoscopic biopsy specimens were taken several times. Histology of biopsy specimens revealed no specific findings other than chronic inflammation. In order to obtain accurate diagnosis, we performed endoscopic jumbo biopsy for the polypoid lesions after obtaining informed consent. The jumbo biopsy specimen was taken by using a saline-solution-assisted snare resection technique that involved cutting with an Olympus SD-210-25 snare and an electro-surgical unit, OLYMPUS UES-20. Histology of the polypoid lesion showed mucosal hyperplasia (Figure 3A). Crypt elongation, chronic inflammatory cell infiltration, congested vessels and hemosiderin deposits were observed in the lamina propria (Figure 3B). Immunohistochemistry using a monoclonal antibody against anti-α smooth muscle actin showed smooth muscle fibers radiating from the thickened muscularis mucosa (fibromuscular obliteration) (Figure 4). Based on these findings, these lesions were diagnosed as prolapsing mucosal polyps with diverticulosis of the sigmoid colon. The patient was treated with anti-diarrhetic drugs and a fiber-enriched diet. Diarrhea was improved and the white blood cell count in peripheral blood decreased to within the normal range.

Figure 2 Endoscopic ultrasonographic examination of early minimal lesion (A) and advanced lesion (B) showing thickening of the first and second layers (mucosa) and irregular echoic lesion in the third layer (submucosa) with hypertrophy of the fourth layer (muscularis propria), and irregular low echoic lesion throughout colonic wall, respectively. 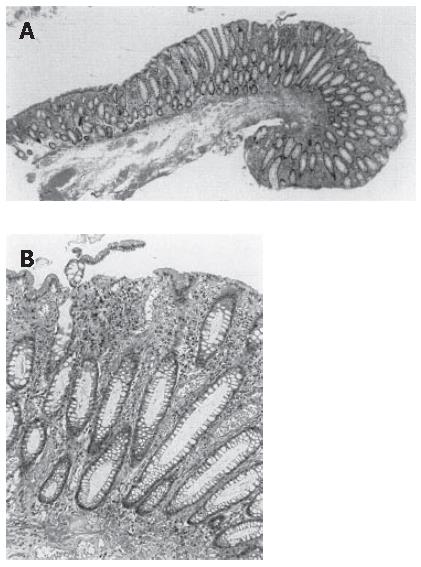 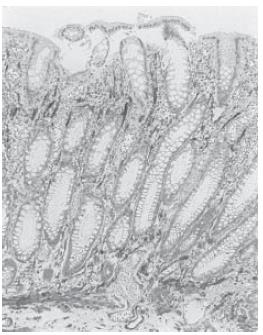 We experienced a patient who was diagnosed by using the jumbo biopsy method as having prolapsing mucosal polyps with diverticular diseases. Cases of prolapsing mucosal polyps with diverticular disease have recently been reported by Franzin et al[1] and Mathus-Vliegen et al[2] These polyps are histologically unclassified polyps resembling those in mucosal prolapse syndrome (MPS). MPS including solitary rectal ulcer syndrome is characterized by the presence of polypoid or ulcerative lesions with the histological changes of glandular epithelium, fibromuscular obliteration and teleangiectatic blood vessels in the lamina propria. MPS is thought to result from chronic intermittent ischemia caused by overt or occult mucosal prolapse. Histological features of these polyps are crypt elongation, up-growth of muscle fibers from the muscularis mucosa (fibromuscular obliteration), and mucosal and submucosal vascular congestion, hemorrhage and hemosiderin deposition[3]. These polyps resemble ‘cap polyposis’; however, there is a large amount of granulation tissue formation called fibrin-cap on the surface and less teleangiectactic changes in ‘cap polyposis’ than in MPS.

Endoscopy in our case showed slightly elevated red round patches, considered to be initial lesions, and smooth and congested hyperemic mucosal polypoid lesions. Tendler et al[4] reported that all prolapsing polyps occurred in the sigmoid colon usually in association with diverticular disease. Endoscopic ultrasonography (EUS) in our case showed thickening of the first and second layers (mucosa) and mixed hypoechoic lesions in the third layer (submucosa) with hypertrophy of the fourth layer (musclularis propria) in small patches, and moderate irregular hypoechoic lesions extended into the fourth layer (muscularis propria) with destruction of the first and second layers (mucosa) and the third layer (submucosa) in the polypoid lesion. It has recently been reported that EUS of polypoid prolapsing mucosal folds revealed thickening of mucosal and submucosal layers, demonstrating remarkably hyperemic and thickened mucosal folds[5]. These EUS findings resemble those described in previous reports of MPS[6,7]. In our case, the mixed hypoechoic pattern of early minimal lesions was thought to reflect mild fibromuscular obliteration and edema in the mucosal and submucosal layers. This irregular pattern was more apparent in advanced lesions throughout the colonic wall. These EUS findings demonstrated changes in the pathological development of these polyps. However, almost all cases of colonic prolapsing mucosal polyps have been diagnosed retrospectively after treatment. Only one case has been diagnosed by EUS findings and a normal surface pit-pattern before treatment[5].

Diagnosis of prolapsing mucosal polyps by examination of biopsy specimens obtained by using biopsy forceps can be difficult because of the sizes and depths of obtained specimens. Results of examination of biopsy specimens obtained several times from our case only showed chronic inflammation without fibromuscular obliteration. Warren et al[8] proposed the usefulness of diagnostic features of ‘diamond-shaped’ crypts in biopsy specimens. However, there were no such findings in our case. Jumbo biopsy is known to be a safe and useful method for diagnosis and treatment, and it is often used for not only endoscopic cure of early cancers, but also obtaining specimens for accurate pathologic staging[9]. In some cases, inflammatory change induces a “pseudo-malignant status”. Colitis cystica profounda, a variant of mucosal prolapse syndrome, is sometimes difficult to distinguish from mucinous-producing carcinoma because of its formation by an aberrantly located gland-forming epithelium[10].