We here report a case of a 18-year-old man with a history of recurrent abdominal pain and a previous episode of severe acute pancreatitis. Abdominal ultrasonography, contrast enhanced multislice computer tomography, endoscopic retrograde cholangiopancreatography, endoscopic ultrasonography and magnetic resonance imaging demonstrated a cystic mass lesion. Only on delayed phase magnetic resonance images after Gadolinium-BOPTA injection, it was possible to demonstrate the lesion’s relationship with the biliary tree, differentiating the lesion from intraluminal duodenal diverticulum, and to achieve the diagnosis of duodenal duplication cyst, a recognized rare cause of acute pancreatitis. The diagnosis was confirmed by histology.

Duodenal duplication cyst (DDC) is a benign congenital anomaly acquired during the digestive system embryonic development. It is a recognized rare cause of acute pancreatitis, usually diagnosed in the first two infancy years. In adults, the diagnosis is difficult because of symptom variety and non-specific nature[1,2]. DDC represents 5-12 % of all gastrointestinal tract duplications and often communicates with either the small bowel or the pancreatic duct, rarely with the biliary system. Duplication anomalies are usually adjacent to the involved bowel. The morphology is spherical or occasionally tubular and may communicate with the lumen[1]. Moreover, they are composed of a smooth muscle wall and an inner mucosal lining. The type III choledochocele by Todani et al[3] is an isolated cystic dilatation of the distal portion of the choledochus, eventually protruding into the duodenal lumen, whose imaging findings are similar to those of duodenal duplication communicating with the bile duct[4,5]. The differential diagnosis between these two entities is often preoperatively impossible. Once the lesion is excised, only the different inner mucosa permits to perform a diagnosis. According to the magnetic resonance cholangiopancreatography (MRCP) findings, we report a case for which we suggest two possible final diagnoses: duodenal duplication cyst or type III choledochocele both communicating with the bile duct. In both computer tomography (CT) and endoscopic ultrasonography (EUS), previously performed, the relationship between the cystic lesion and the biliary tree was not clear. As far as we know, this is the first case where magnetic resonance (MR) with Gd-BOPTA (a contrast medium partially excreted by the biliary system) is able to demonstrate the relationship between the cystic lesion and the bile duct, which presents an anomalous pancreatic-biliary junction.

A 18-year-old man was referred to emergency room for an episode of severe acute pancreatitis. The patient was already known for previous recurrent abdominal pain. Laboratory values indicated an acute pancreatitis (increase of serum amylase and lipase activity). Other laboratory results including liver enzymes and peripheral blood count, serum protein and creatinine concentration were within the reference ranges. The patient did not have any primary cause of pancreatitis (e.g. alcohol consumption or choledocholithiasis). Ultrasonography (US) showed a hypoechoic area at the head of the pancreas, finding compatible with focal necrosis in pancreatitis. Contrast-enhanced multislice CT (16 rows) confirmed the presence of necrotizing pancreatitis at the head (Figure 1A) and revealed a cystic lesion containing filling defects within the third portion of the duodenum (Figure 1B). After oral contrast agent (Gastrografin) administration, the cystic lesion was not filled up, suggesting the diagnosis of DDC (Figures 1C and D). The upper gastrointestinal series showed a four-centimeter intraluminal defect located in the medial wall between the second and the third portions of the duodenum. Endoscopic retrograde cholangiopancreatography (ERCP) was impossible to perform because the large submucosal mass was close to the major papilla, obstructing the bile ostium and pancreatic duct (Figure 2A). 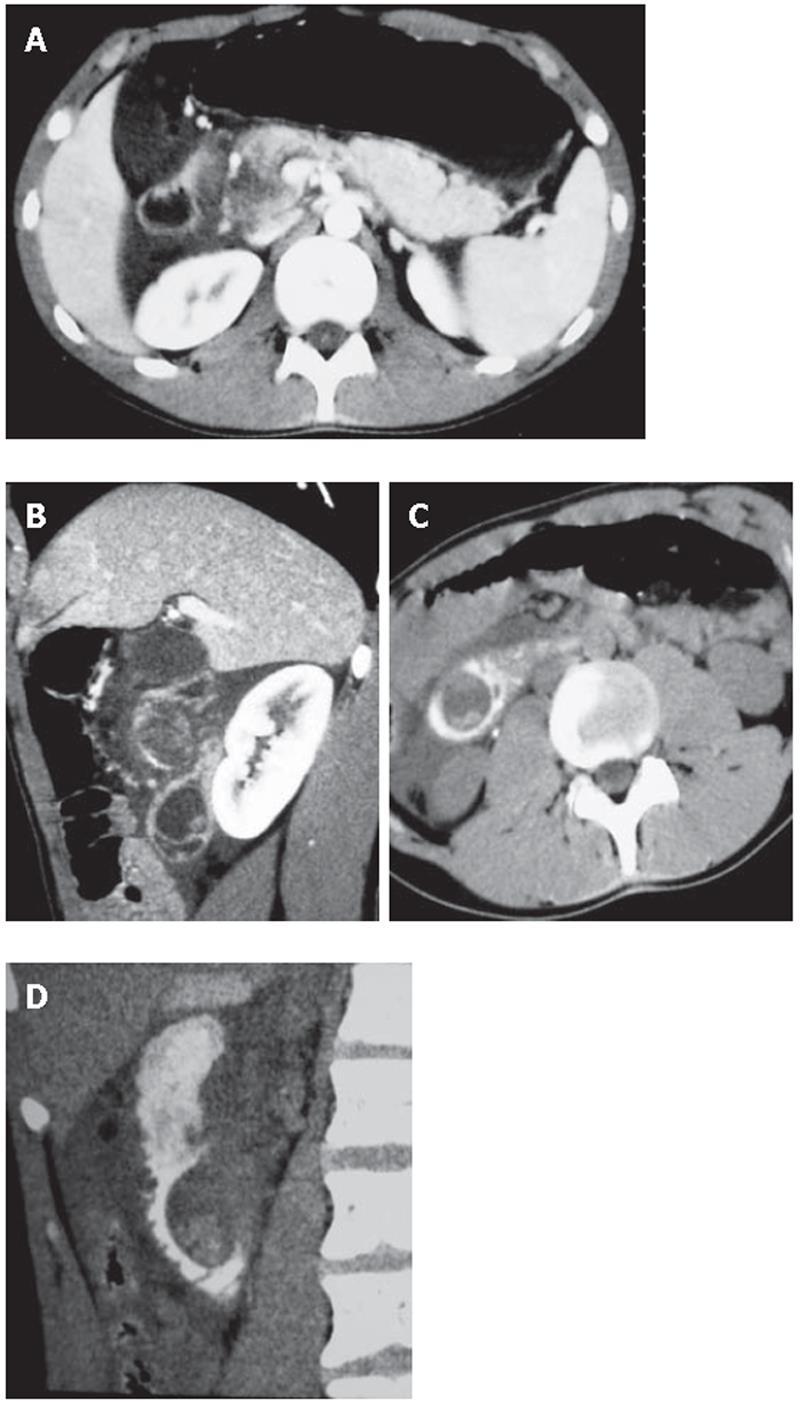 Figure 1 MSCT findings. A and B: On axial plane after i.v. injection of contrast medium the head of the pancreas presents a necrosis area, and on oblique plane the duodenum shows a cystic lesion filled with small stones; C and D: Oral 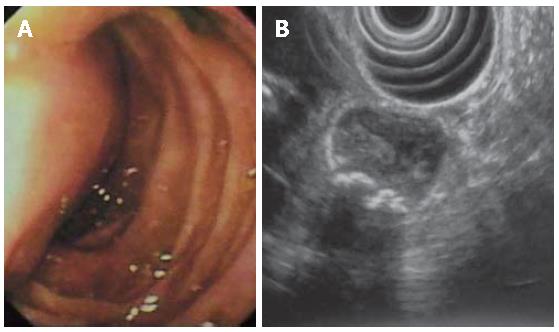 Figure 2 Endoscopic (A) and EUS (B) findings. By endoscopy the lesion appears as a submucosal mass obstructing the bile ostium and protruding into the duodenal lumen; EUS procedure was impossible to obtain further information because of the cystic lesion large size. The presence of calculi in the lesion was

EUS confirmed the presence of a submucosal cystic lesion at the inferior duodenal genu filled by calculi (Figure 2B), which was peculiar of choledochocele. Because of the site (duodenum medial wall) and the large size of the cystic lesion it was impossible to demonstrate a linkage with the biliary system.

MR imaging was performed to solve the diagnostic discrepancy between CT and EUS and to better demonstrate the relationship between the cystic lesion and the bile duct. A 1.5 Tesla MR system with the following protocol was used: Breath Hold T1 GRE fat sat sequence (TR/TE 160/4,2), HASTE sequence TR/TE ∞/120 in the axial and coronal plane, RARE thick slab sequence (pre and post oral superparamagnetic contrast agent administration - Lumirem - Guerbet) and VIBE sequence in the coronal plane pre- and post-contrast agent administration (Gd-BOPTA), followed by a delayed phase at 120 min. The Gd-BOPTA is a mixed (interstitial and hepatocellular) paramagnetic contrast agent partially excreted through the biliary system, giving the opportunity like 99mTc-HIDA scintigraphy, to functionally evaluate the biliary excretion. All MR images showed a four-centimeter well circumscribed mass in the duodenal wall.

MRCP performed before and after a negative contrast agent oral administration, demonstrated that the cystic lesion was not directly in connection with the duodenal lumen. HASTE axial and coronal sequences, showed filling defects in the gravity-dependent position of the cystic lesion (Figure 3A). Heavily T2-weighted sequences (RARE thick slab) obtained in the coronal plane confirmed that the fluid content of the lesion was changing position with the peristalsis, without any definitive information about the relationship with the bile duct (Figure 3 B). Furthermore, on the delayed 3D VIBE images after intravenous (i.v.) injection of Gd-BOPTA, it was possible to demonstrate the direct passage of hyperintense bile fluid into the cystic lesion, confirming the existence of a linkage (Figure 4). 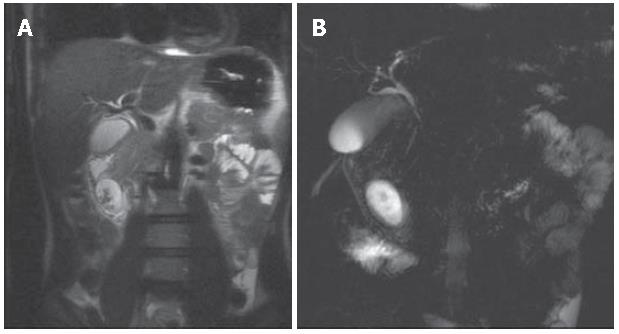 Figure 3 MRCP findings. A: Axial HASTE sequences demonstrate the intraluminal site of the duodenal cystic lesion with filling defects in the gravity dependent position; B: After superparamagnetic oral contrast medium administration the hyperintense cystic lesion does not change signal intensity. 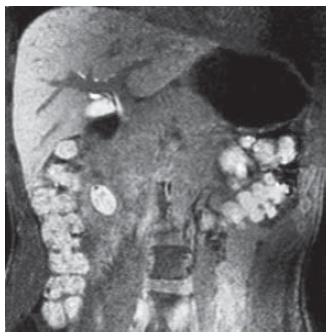 Figure 4 MRCP findings after Gadolinium BOPTA injection. Coronal VIBE sequences obtained in the delayed phase (2h) reveal the presence of hyperintense bile simultaneously in the biliary tree and in the cystic lesion, confirming the relationship between these two structures.

Once the patient recovered from the acute pancreatitis, one month after his first hospital admission, he underwent surgery. During laparotomy (Figure 5), after cholecystectomy and duodenotomy, two probes were inserted into the biliary tree through both cystic duct and ampulla: both the probes reached the diverticulum confirming the linkage between these anatomical structures. Then the diverticulum was opened, multiple stones were found and the wall was completely excised up to the duodenal plane. The hole was closed with single layer stitches. Six days after surgery the patient was discharged. 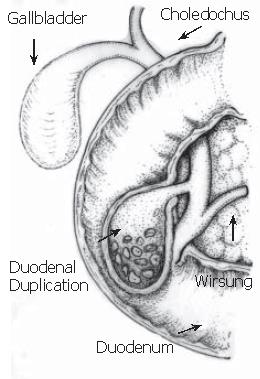 Pathological examination of the excised cyst wall showed duodenal mucosa, submucosa and muscle coats. The pathologist made a diagnosis of duodenal duplication (Figures 6A and 6B) and found cholesterolosis in the cyst, in accordance with MR findings.

Figure 6 Mucosa, submucosa and muscle coats found in pathological ehamination. A: Gross transversal section of the specimen “in toto”: inside it is possible to see the duplication lumen (DL) while the intestinal lumen is outside (IL). In the inner lumen there are bile plugs (*); B: Histology of the duodenal duplication. Microscopic low power view of the duplication wall (2x). The wall is composed of muscolaris propria extending into the septum between the duplicated segment and the mucosal lining. Intestinal mucosa is on both sides of the duplication, with a lot of macrophage cells (*) in the lamina propria of the internal one.
DISCUSSION

Clinical findings of DDC are either non-specific, such as mild abdominal pain, or specific, recalling acute or chronic pancreatitis. Two possible mechanisms might be responsible for pancreatitis: a transitory and mobility-related duodenal obstruction of the major papilla outflow by the cyst, and the migration of biliary sludge and/or microstones from the cyst to the biliary tree as observed in biliary pancreatitis[1]. As regards bile in- and out-flow, what we can imagine is a dynamic mechanism like gallbladder: the DDC wall is made of muscolaris propria, so there is peristalsis that outflows the bile. It is present a certain degree of stasis and demonstrated by the presence of stones. The pathogenesis of stones can be related more to the bile stasis in the cyst than to direct calculi drop down. Nevertheless the stasis, being intermittent due to peristalsis, does not automatically lead to a liver enzymes elevation, as in the literature[2,5,6]. The intraluminal mass has to be differentiated from a peduncled neoplastic lesion or an intraluminal duodenal diverticulum[6,7]. The cystic lesion is not an intraluminal duodenum diverticulum because the signal did not change after superparamagnetic contrast medium administration, remaining hyperintense in T2 weighted sequences. On opposite, the intraluminal duodenal diverticulum should become hypointense, due to the connection with the lumen. The differential diagnosis between these two different lesions is possible without administration of i.v. contrast medium[1]. Moreover MRCP alone cannot reveal the linkage between the cystic lesion and the bile duct, in particular if biliary anomalies are present. Following Gd-BOPTA injection, the presence of hyperintense biliary fluid on VIBE sequences can be demonstrated. The contrast agent fills both biliary tree and cystic duodenal duplication. In this case report the imaging findings of duodenal duplication cyst communicating with the bile duct were comparable to that of choledochocele type III by Todani et al[3]. Considering the intraluminal site of the cystic lesion, it is possible to exclude other cystic diseases such as duodenal wall cystic dystrophy, pancreatic pseudocyst and other cystic masses belonging to the duodenal-choledochal-pancreatic area.

Regarding therapy, any surgical intervention should ensure complete resection of the duplication, in addition to its mucosa, in order to prevent malignant transformation[6].

Using both a negative oral contrast agent and an i.v. hepatospecific contrast agent with biliary excretion, MRI has a pivotal role in preoperative diagnosis to characterize duodenal cystic lesions eventually communicating with the biliary system and to differentiate duodenal duplication cyst from intraluminal duodenal diverticulum. In the case herein reported, distinction between choledochocele (type III) and duodenal duplication was only possible at pathological examination.